Discovering the Next Metallica

As the founder and CEO of Metal Blade Records, Brian Slagel is known for giving Metallica their first break in 1982. Now some 31 years later – and amidst tumultuous industry headwinds – business has never been better. What’s the secret to his label’s success? In this exclusive Q&A, Mr. Slagel provides insight on signing new talent, the importance of social media and why record labels are still relevant. 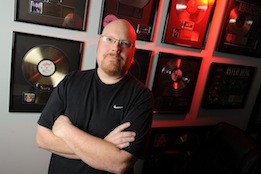 Brian Slagel (pictured): The older I get I tend to like it a lot more. And I think that’s the interesting thing about metal fans too – if you get into heavy metal when you’re young, there’s a good chance you’ll still be a fan 20-30 years down the line. I see that so often. Metal fans, for the most part, stay metal fans their whole life. That’s certainly the case for me. I still love it now as much as I did when I was 21.

What does it take for you to sign a band? Is there a science behind it?

Hasn’t really changed that much in the 31 years of the label’s existence. If I like a band, we’ll most likely sign them. It stems more from a gut feeling. I need to hear something and think, ‘that’s really interesting.’ But because there are so many bands out there, you can’t sign everybody so it really helps to have some hype surrounding the band, like a social media presence and good touring history. I need something that’s more than five guys in a garage that make a demo. It really increases the band’s chances of success if there’s a little bit of a starting point to work with.

We have high hopes for Battlecross, they’re a great example of how social media can help a band if you do it the right way. I always refer to them as my social media case study since they’ve done such a phenomenal job. In fact, they did it so well right from the beginning it provided them a lot of opportunities that they just wouldn’t have normally come across, like befriending a platinum selling metal act like Five Finger Death Punch.

With music technology and social media being so widespread, what value does Metal Blade – or any music label for that matter – bring to the table?

The prevailing theory has been – and this goes for the entire music industry, not just metal –you can make your own music, get it out there and make something happen. While it’s true that you can most certainly make your own music and get it onto iTunes, you don’t have a whole group of people that can help get you to that next level. It’s much more difficult to get out there into radio stations and magazines if it’s just you and a few of your friends. I almost look at Metal Blade as a services company, more than a traditional label. We offer a whole host of things to get you started whether it’s social media, getting onto satellite radio, etc. If you don’t have a credible team around you experienced in these different avenues, it’s almost impossible to make things happen.

People like Prince and Radiohead tried to do it on their own and they eventually realized they need a team of people around them. I think that’s the one major thing people forget. It’s not just the label, it’s distribution and a whole network of people, in our case, 150 people around the world working in different capacities to help you get to that next level.

More Metal Blade acts, like the aforementioned Battlecross, are charting on Billboard. Does this mean a band is successful? How do you determine success in this day and age of illegal downloading?

There are varying degrees of success. It often depends upon how much it cost to produce and promote a record. Back in 1985 if you sold 10,000 records, that was like a gold record to an independent label like us. For independent artists, the threshold for success is a lot smaller than being on a major label. Today, shifting 50,000 units as an independent is awesome whereas that might be considered a flop on a major label. The economics of records is a lot different now too. Even if sales are a lot lower, overall costs to produce a record are a lot lower too. At the end of the day, this is more about making bands successful enough so it truly becomes their full time career. Extreme acts like Cannibal Corpse and Amon Amarth, for example, have sustained nice, long careers – they all have houses, kids, cars, wives – a normal life. And they are able to do it because of the music.

Can a Fire-breathing Bagpipe Player be a Thought Leader?

The Beat Goes On: How Vinyl Records are Making a Comeback

We've definitely come a long way from the days of MTV launching the careers of the likes of Ratt, or the long overdue discovery of the likes of John Cafferty and the Beaver Brown Band. Nevertheless, Eddie lives!