With more customers moving towards a cloud based IT investment strategy for their HCM solution the need to integrate with their existing OnPremise setup and other 3rd party systems is on the rise. Large companies generally move towards a Cloud HCM investment like SuccessFactors in a phased manner. The phased approach is generally in two dimensions the first one being the solution dimension where only certain processes are first moved to the cloud example Performance Management or Compensation Management or Recruiting and later on the other core processes of the company follow. The second dimension is location wise where HCM Business processes in select set of locations are moved first before the rest of the larger regions follow.

What this results in; is the requirement to keep all of the systems in sync and ensure the processes cross interacts in a smooth manner. A few examples of this setup that leads to an integration requirement in SuccessFactors could be the follows:

Connecting to a SuccessFactors system is now as easy as providing the system credentials, choosing the entity and deciding on the process flow and mapping.

If you would like to get an early access to using SAP HCI via the Trial Landscape visit the blog SAP HANA Cloud Integration – Test and learn more about SAP’s cloud based integration solution to know more. You can use the SuccessFactors Adapter even via the trail landscape.

Capabilities of the SuccessFactors Adapter

The support for oDATA Entities that was released in SuccessFactors release 1311 and Ad-Hoc Query support is under development in HCI at the time of writing of this document (Jan 2014). You can expect this functionality soon.

Configuring the SuccessFactors Adapter in iFlow

Use the SuceessFactors Adapter as a Receiver channel when you would like to query or update data into the SuccessFactors system not at a specified intervals but rather on completion of other integration flow steps in the iFlow. 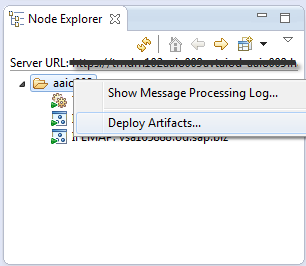 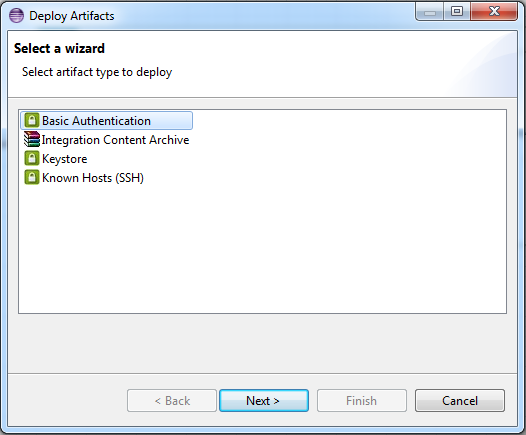 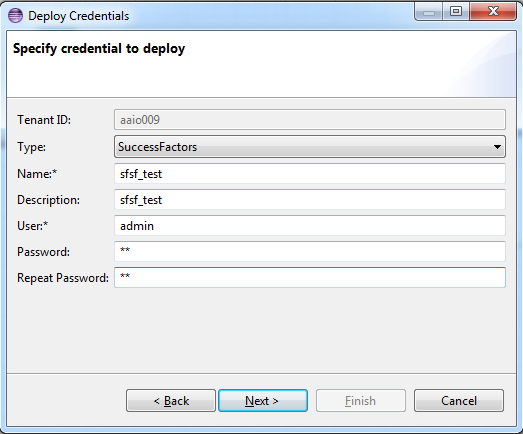 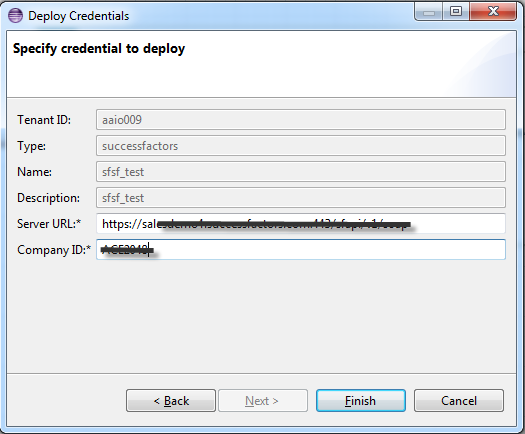 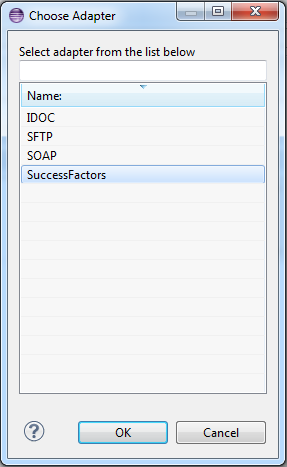 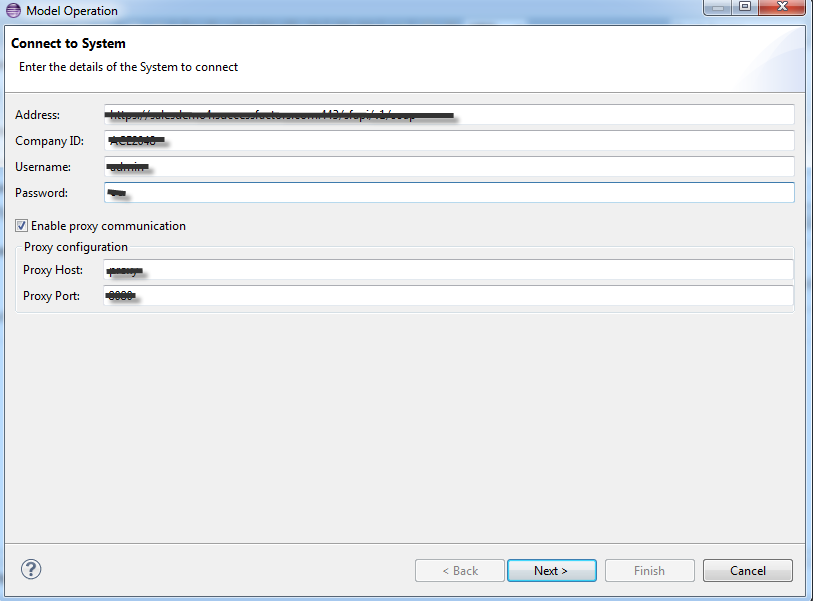 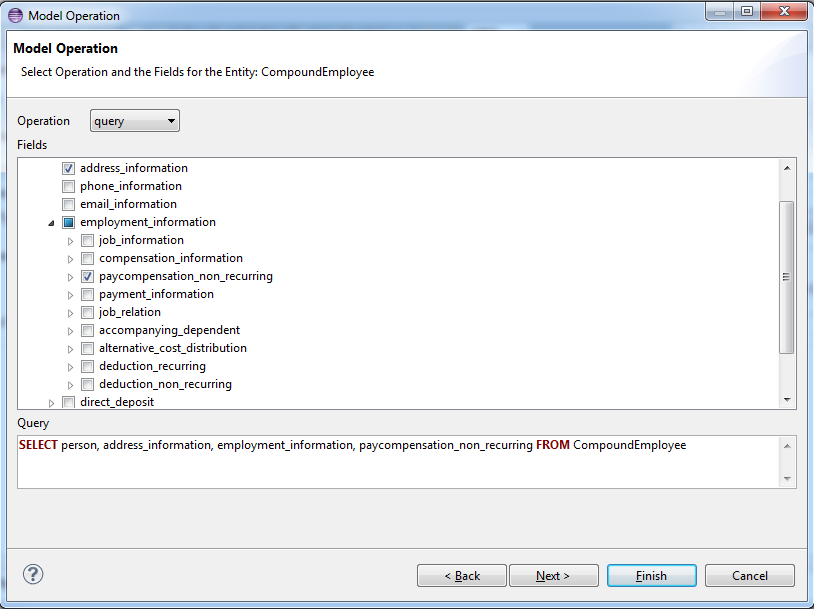 Also Note when using the Adapter for Operations like Insert, Update or Upsert certain fields are prefilled which are mandatory for the API to work. 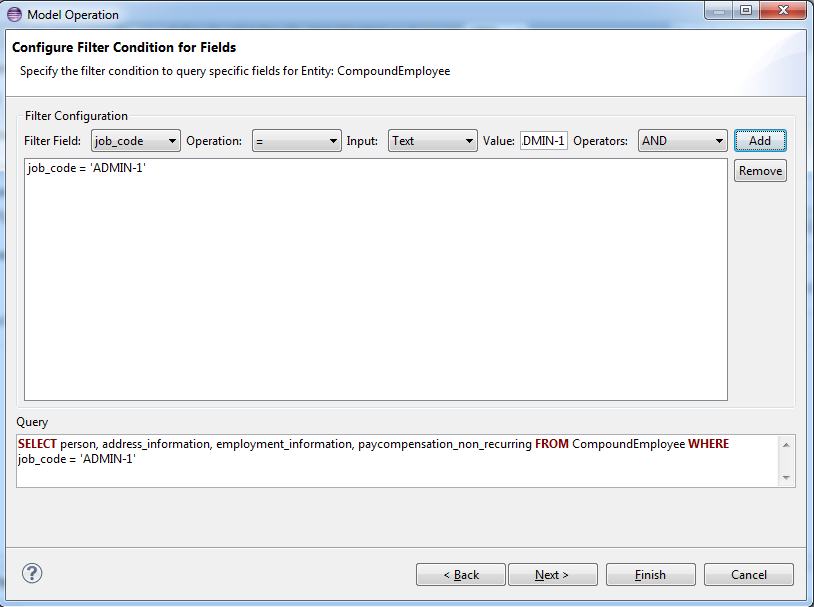 You have an option to specify the value as an Xpath. This would be useful when using the SuccessFactors Adapter as a Receiver Channel and you would like the value in the Query to be extracted from the payload available in the message bus.

You can also specify a DateTime filed like last_modified_on as a Delta Sync operation in which case if the iFlow is scheduled to run at regular intervals only the changed records are fetched in subsequent runs.

In case the selected entity allows sorting on certain fields as specified in the Describe API then you would get a filed list using which you can sort. In the case of the Entity in this example CompoundEmployee you may not have any sortable fields

An XSD is generated in the Project package src.main.resources.wsdl automatically. In case of an existing file you also an option to overwrite it.

The XSD file would be useful when you would like to map your payload to the data in the required format using the mapping step. In this simplistic example this step has been avoided.

In case of the Insert, Upsert, Update operation you can use the XSD file on the RHS (Right Hand Side) of the mapping editor and transform the data that you receive on the LHS (Left Hand Side) before passing it to the SuccessFactors system.

The Scheduler Tab is available only when using the SuccessFactors Adapter as a Sender Channel. You can use the Scheduler Tab to schedule the triggering of the iFLow at specified intervals.

In the above example the Scheduler is triggered every day at 1:55 PM Indian Standard Time (IST)

For this specific example the easiest way to see your paylod output would be to configure an SFTP server as a Receiver Channel. With this you can see the queried payload in your SFTP server. 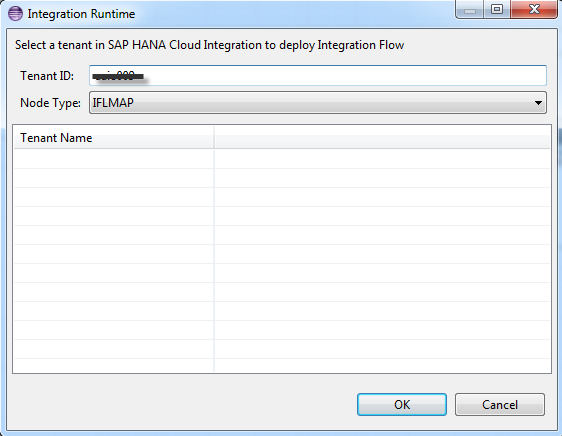 Note: You can also see the status of the iFLow deployment by going to the Deployed Artifacts View of your Tenant Management Node in Node explorer 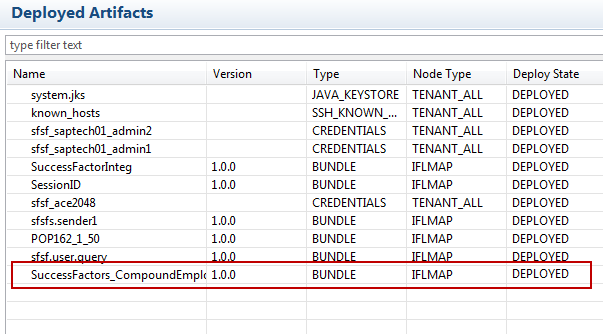 STEP 8: Check Monitoring and Logs to know the status of execution 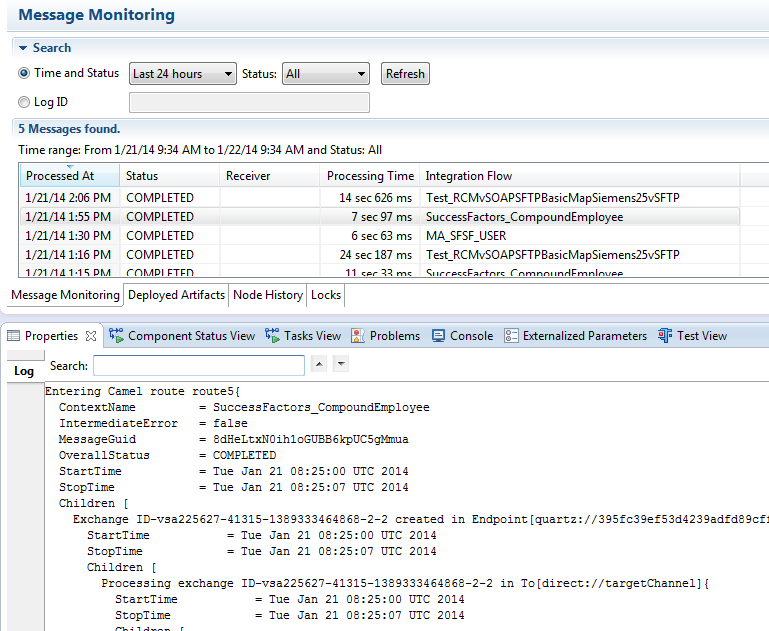 With this you have completed creating and deploying a simple Integration Project that connects to a SuccessFactors system. HAPPY INTEGRATING !!!

Very nice blog! Nice to see the arrival of an SAP SuccesFactors adapter. This really leverages the capabilities of HCI. Hopefully there will be more functional adapters delivered by SAP out-of-the-box.

Hello again, I was searching for doucmentation about the adapter. I cannot find any, also there is no information in the Developers Guide as you mentioned. I updated my Eclipse and I can use the adapter there. But I would like to find some further documentation.

Refer section 2.3.6.2.5 Configuring a Channel with SuccessFactors Connector in the document

Any Idea if I would like to pick up the data from multiple entities from SuccessFactory with the single Comm. channel?

A channel does only one operation on one Entity at a time. You can wait for the release of 'Service call' as a step in the iFlow soon and via this you will be able to have several of the Service Call steps in the iFLow. In each of the Service cal step you can configure a difefrent channel. This capability will allow you to call several Entities and their operations in the iFlow.

You can wait for the release of 'Service call' as a step in the iFlow soon and via this you will be able to have several of the Service Call steps in the iFLow.(Please elaborate)

Let's say If I made three service calls  it will generate 3 messages.right? How to convert them these 3 response messages to the request call.

Service Call is a step that allows a Recever channel to be configured. It is better I understand the exact scenario you are doing to respond back to the specific query.

Can you please dop in a mail to sabarish.t.s@sap.com

will this completely eliminate the need to pass CSV files between SF and SAP? We are currently creating the UDF file in SAP and sftp the file to SF. We are also downloading data from SF using CSV format and loading data into SAP. Appreciate your comments

SuccessFactors exposes a lot of SOAP based webservices and if your scenario can be achieved using these services you can directly use the SuccessFactors Adpater in HCI and not rely on SFTP.

I am trying with an interface with SF to SAP PI to thirdparty.

for this I am trying to generate an SFAPI (XSD which need to be used in SAP PI message mapping) from Eclipse juno.

I configured Juno and trying to generated an XSD through SF adapter.

I gave all details and credentials of SF in SF adapter.

here I am getting an error says that

do we need to deploy SF SSL on Juno? If yes can you tell me where can I deploy this.

I generated certificate from Successfactors from Mozilla.

We are integrating SF using PI, I have to extract all the Information about a candidate for his background check.

They are saying this is available in individual entities and asking us to query all entities for single candidate information.

I understood I can query only one entity/compound entity,

Please shed some light how can I query information from multiple entities...

if yes Is there any Sample Query…

Can SF build new SFAPI with all entities and provide us a compound entity?

If anyone resolved this issue then what was method followed?..

You have an option to create AdHoc reports in SFSF system and you can call this from the SFSF PI Adapter.

I am trying to generate the XSD for a Synchronous Operation: Eg: User Upsert.

The Model Operation in this case only generates the XSD Structure for the Request to be sent from PI / HCI to SuccessFactors. There is no response structure that is created in the XSD.

1. How is the Response Structure to be generated? ( Note: I have selected Synchronous as the Call Type )

1) You are right, the response structure is not auto generated. The response follws the same format as specified in SFSF API Functional Guide.

2) The SFSF request format defines a generic SF_Object structure and this can get confusing in mappings. In order to give a cleaner structure we have tweaked it a bit to make it more readable. And when the call is sent to the SFSF system we ofcource convert it back to the format expected by the service. This is an internal logic which you need not worry about and can ignore.

Please feel free to send me a mail at sabarish.t.s@sap.com in case you have any detailed queries around this.

Thanks Sabarish, the above makes sense!

How did you configure the receiver SFTP Server? It's not having any option to enter the password. In PI we  can authenticate a SFTP server in 2 ways- using username/password  and using certificates. But looks like HCI SFTP server has only certificate option. But I'm strugling to understand how to link the certificates in the SFTP channel. Do we configure it using "Define Artifacts"?

You can refer online documentation at: SAP HANA Cloud Integration to understand how SFTP works in HCI.

Auto Sync Feature : We are trying to figure out how to use the AutoSync in a SF Sender Channel with QUERY operation but not able to make much headway on.

1. Can we develop Consumer Proxy and Service Definitions in ERP using SF WSDLs OR some method so ERP can directly get OR put data to SF without Middleware.

2. Can you help with example on HCI as middleware and ERP hits HCI via SOAP to update some info to SF for some object/entity.

1. I am not sure how can ERP directly send data to SFSF system. If there is any destination whcih can be build in ERP with destination configuraiton for SF system then it might be. But still i am afraid as they both communicate data in different format and hence a need of middle ware.

2. Yes there are several HCI standard content involving ERP via SOAP to send data to SF through HCI. These are available on content catalogue https://clouldintegration.hana.ondemand.com. One for example would be content "SuccessFactors RCM with 3rd Party Assessment Vendor SHL".

You can see my blog for more information:

Step by Step Guide to Setup HCI-DS Agent On Premise

Really appreciated your article, I just configured Iflow as you mentioned, but got following error.

"web##Message is greater than the maximum size of 3KB. Hence it is truncated|"

Is there any parameter need to be set on SF or HCI side. Please help to suggest.

i am following this guide but i am not able to the see SFAPI entities mentioned in step 4.

What could be happening?

I wonder if there is a successfactors trial system to use with HCI trial ?

What is the maximum page size for successfactors odata v2 adapter in SCPI ?

I am following this to the tip in the cloud not using eclipse. I create the request reply, I connect with SF, I enter one object and select the fields but when i click FINISH I get an error message, "Failed to save query 'Department ID' name pattern not valid.."

I have no idea what this means, i haven't selected any department at all.

This error appears no matter which object i read.

However, if i copy the query, cancel, and paste it outside works fine! I can read SF with no errors at all!
The catch here is that that way, I cannot use any mapping because the XSD file is not being downloaded from SF.

I have check the user if it has enough permission and it has everything.
Can anyone help me?