PS4 is Selling at a Faster Rate Than Xbox One

Just before the PlayStation 4 and Xbox One launched back in November, I took a look at social media data to see how the two next-generation consoles were stacking up to one another.  At the time, the PS4 was being talked about more and perceived to be the more powerful console, while the game lineup of the Xbox One was getting more positive sentiment (via SAP Social Media Analytics by NetBase).  Now that the consoles have been on the market for two months, I wanted to see if more PS4 chatter would be correlated with higher sales.  It appears that they are. 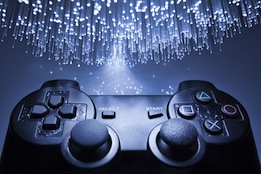 Both Microsoft and Sony have been playing the game of numbers ever since they launched their new consoles.  Each console sold over 1 million units in the first 24 hours.  On January 6, Microsoft revealed that it sold over 3 million Xbox One consoles in 2013.  A day later Sony revealed that it had sold 4.2 million units in 2013.  Just recently, Microsoft highlighted Xbox One figures published in a report by market research firm NPD Group, specifically pointing out that Xbox One outsold the PS4 in the United States in December.  Sony retorted that they were still ahead overall and blamed stock shortages for underselling in December.

In all, I would tend to agree with Microsoft’s Larry Hryb, aka Major Nelson, when in a Reddit thread he commented: “Both new platforms are off to a great start. We all should be celebrating a healthy vibrant industry.” Nonetheless, the relative success of PS4 took some by surprise, especially given that both Microsoft and Sony reported around 2 million units sold in about two weeks after launch.

Well you could, but you’d get the wrong picture. Why? Because PS4 was released a week earlier than Xbox One, and at the rate it’s been selling, that extra week gave Sony time to sell an additional half a million units.  This means that in the time it took Microsoft to sell 3 million units, Sony probably sold in the neighborhood of 3.6 million units, not 4.2. Let’s look at the data.

Here are the self reported sales figures for each console (if I missed any, please let me know in the comments!).  The date links to the source.

* Microsoft did not release a specific year-end date, stating only “over 3 million Xbox One consoles were sold … before the end of 2013.” I therefore used Sony’s year end date of 12/28, which errs on the side of being more positive for Microsoft.

Here is the same data in a plot: 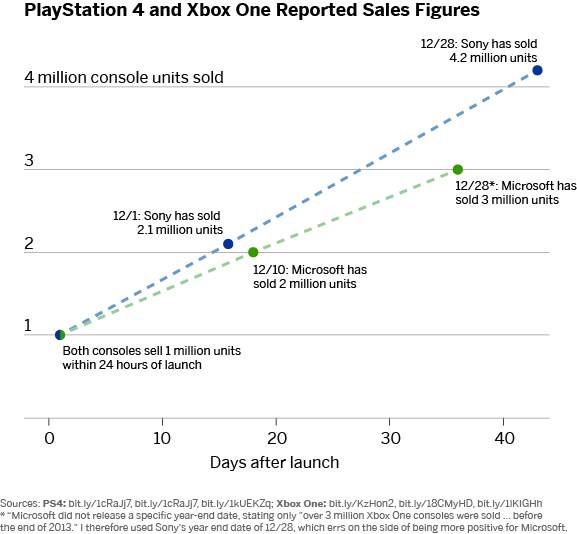 Looking at this graphing two things are pretty clear: PS4 is selling faster than the Xbox One, and Sony did not sell 4.2 million units in the time it took Microsoft to sell 3 million. With these data points in hand, we can approximate how many units were being sold a day, or rate of daily sales, after the first day of 1 million unit sales (since this will be an outlier of a day):

For each console, the daily sales rate remained pretty consistent between reported numbers, implying linear growth of cumulative units sold (although actual retail sales will look more erratic).  On Dec. 10, we could have already predicted year end sales numbers fairly accurately, and although both had sold “about 2 million” in “about two weeks,” the details reveal that the PS4 was already selling quite a bit better at that point.

Using the estimated daily sales rate, Sony had probably sold around 3.6 million units in the time that Microsoft sold 3 million units.  Put differently, Sony has sold 1.225 times as many PS4’s as Microsoft has sold Xbox One’s.  Incidentally, the Xbox One is 1.25 times as expensive.

At the moment it looks like the PS4 is in a better position.  If their reported sales rate continues at the current pace, then they’ve already sold over 6 million units (to Microsoft’s estimated 4.4 million) and we could expect a press release announcing 6.3 million units sold (2.1, 4.2… 6.3?) next week.

This is really great news for Sony for two reasons: 1) neither console has yet launched in Japan, Sony’s home turf.  Sony announced it will launch the PS4 in Japan in February 2014.  Microsoft hasn’t set a firm date beyond “2014”.  If Sony gets a good headstart in its backyard, I expect more good news for Sony.

The second reason that I think Sony is in a good strategic position is that I think the future of consoles is not the games themselves, but all the other content and data that it will deliver.  I may have bought my PS3 for games, but my wife uses it for Netflix and Amazon Video.  Video games will remain an important part of the mix for sure.  But recent NPD numbers suggesting Xbox One games have been selling better are only strategically important if they translate into more consoles sold. As we move into the future, both Sony and Microsoft want to own your TV screen, for games and everything else – and “everything else” is where the future big bucks await.