Marshall Faulk is just like you. He’s made fantasy football predictions based purely on gut instinct (and kicked himself for it later). He’s never stopped rooting for his hometown team. And there are certain players that he pulls for more than others. Oh, but there is one small difference: he has a Super Bowl ring on his finger. We sat down with the NFL analyst and SAP Ambassador to pick his brain about his memories of winning the NFL’s biggest game, the role data and analytics will play in predicting the outcome of Super Bowl XLVIII, and why there’s simply no better way to end a season in all of sports. 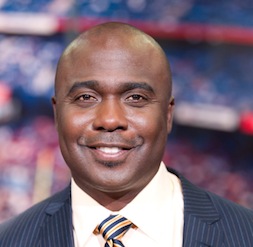 SAP Business Trends: How did you prepare mentally for your first Super Bowl?

Marshall Faulk: Mentally, I think it’s fairly impossible to prepare for what’s going to happen to you. I remember my first Super Bowl, running out of the tunnel and hyperventilating—I was so excited. I mean, this was my dream as a kid, to play in the Super Bowl, and I was getting an opportunity to do this. And I’m last, they called me last, I come out, I’m hyped, I’m ready, I get to the sideline—I’m out of breath! I’m like, how can I be out of breath running out of a tunnel?!

MF: The main story line is going to be the weather. The Super Bowl will be played in the elements, where the game was born. Before there were domes, you played in the rain, the snow, the wind, whatever it was. Whoever stands up on that podium and hoists that trophy, they are going to earn it, because the elements really are going to come into play.

BT: You’re one of the few people who’s gotten to experience the Super Bowl as a player, analyst and fan. Have there been high points for each of these vastly different perspectives?

MF: As a player, there’s no greater feeling than after winning the Super Bowl, standing up on the podium, holding up the trophy—just like as a kid, playing King of the Hill, knocking everyone else down. You’re the champ. As an analyst: watching guys live out their dream. And as a fan, growing up in New Orleans, it was something that I never thought—we never thought—we’d get a chance to see: our hometown team win the Super Bowl. And working the Super Bowl, being on that field, watching the team celebrate, I felt like I’d won another Super Bowl, because I’d been a fan all my life.

BT: For fantasy footballers, you’ve become a go-to guy for fantasy advice. How heavily do you rely on statistical analysis when making your day-to-day assessments?

MF: I know I’ve given a lot of advice throughout the year about fantasy football teams, who to sit and who to play and who might be hot, and trying to keep you ahead of the trends. And using the Player Comparison Tool—it’s really helped me. But every once in a while . . . I’m just like you, you just want to go with the gut feeling, you want to go with that guy because maybe he’s the guy on your team that you really like, not just your fantasy team. And just like me, you found out that the tool usually is right.

BT: How big of a role does data and analytics play in relation to the Super Bowl?

MF: It’s huge. The fans, they want more. And I believe the partnership with SAP and the NFL, they’re going to bring the fans more. They’re going to get to interact and know what’s happening on the field. They’re going to have a better idea as to what their favorite players are doing. They’re going to know their team and how to keep up with their team in ways that fans never really knew how to. Usually you sit there and you try to guess or you look up at the scoreboard, which doesn’t provide you all or enough information. Now they’re going to be provided with all of that juicy stuff.

BT: Which current NFL player would you love to see win a Super Bowl title?

MF: It’s funny that I’m even going to choose this player, because Peyton Manning is a guy who has already won a Super Bowl, but I believe that because of the criteria that we put on being the greatest of all time, it requires you to win multiple Super Bowls. It’s the only thing holding him back from people crowning him, as he should be, the greatest quarterback to play our game.

BT: Is there a special moment from your 1999 Super Bowl victory that most fans probably haven’t heard?

MF: A special moment for me … it had nothing to do with me. Our opponent blitzed all the time, and they ran the blitz that I had seen while watching film. I’d watched them use this blitz against other people, and it knocks your quarterback out. And I remember I went right, and I saw the blitz coming. I cut in front of Kurt Warner, took the guy’s legs from underneath him, he threw the slant to Torry Holt. Torry caught the ball with one hand up against his facemask, and we scored. You know, most of the time the plays that you remember, it has something to do with you having the football, but this play had nothing to do with me having the football, it was about helping out a teammate, doing something that you really don’t get a lot of credit for, which is blocking so we could score a much-needed touchdown in that game.

Spencer Berger is a Los Angeles-based writer and musician.

I, too, am rooting for Peyton to win another Super Bowl. However, if multiple Super Bowl wins is your criteria for determining the greatest player, Peyton is a way back in the queue. It will take 5 rings to get ahead of Terry Bradshaw ( and numerous other 1970s Steelers) and others, and 6 to get ahead of Charles Haley.

As a Rams fan in St. Louis, I always enjoy reading interviews from members of the Greatest Show on Turf and Marshall Faulk will always be favorite for those us in St. Louis who got a chance to watch him play in person.

Thanks for providing this great interview here.

Please check out this interesting idea Mitch Clark from the Industrial Machinery and Components Business Unit thought up:

Could SAP help someone win US$1 BILLION from Warren Buffet?

Or on LinkedIn at: