The HR Forms Workplace enables you to create reports for HR master data, personnel time data, and payroll results with an attractive layout.

HR FORMS Workplace is accessed by the T-Code HRFORMS. This Workplace is categorized into three different sections namely,

T-Code HRFORMS will navigate us to overview of HR Forms Workplace.

HR Form creation involves data selection and form layout separately. In data selection we use MetaNets, InfoNets to select the data that needs to be printed on the form whereas we can select Smartform / Adobeform for form layout.

In this document we make use of the Adobe form to design the layout.

Click on the create button in HR Forms Workplace which opens the create form sub window.

Enter the form name, country grouping as per the business requirement and form class depending on the type of form you want to create. 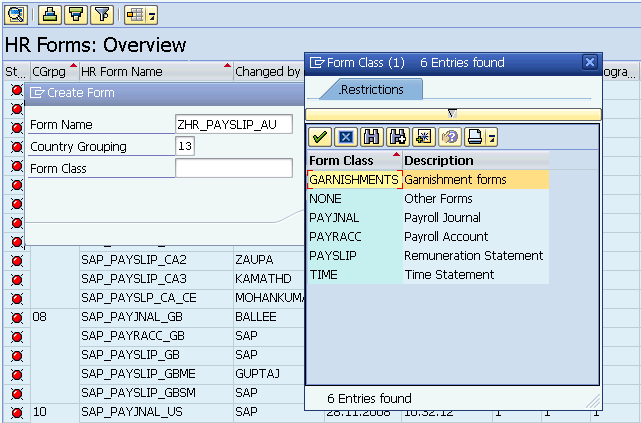 You can also make a copy of the existing standard HR Forms within the required country grouping and do changes as per business requirement.

The Form ZHR_PAYSLIP_AU is created and the SAP Standard MetaNet is populated based on the form class selected as in Figure 2.

User defined MetaNet can be created using the T-Code HRFORMS_METADATA. 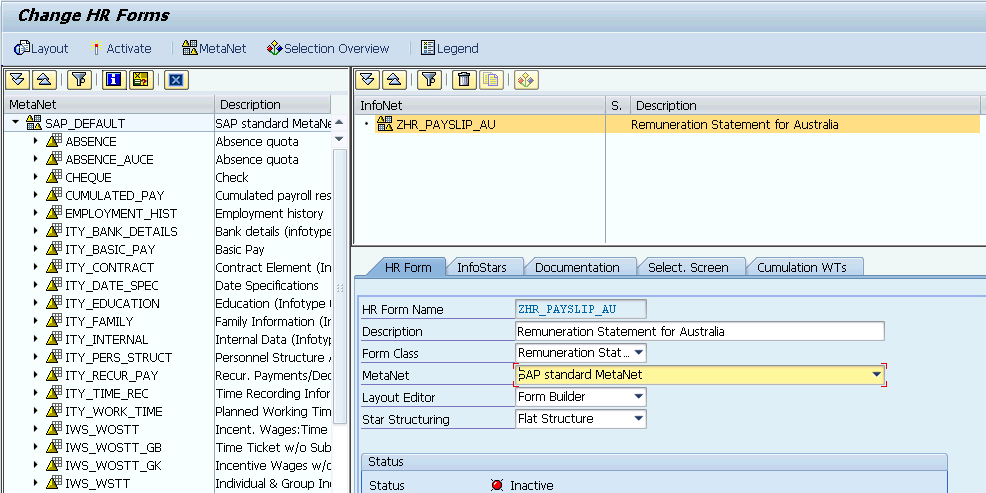 Layout Editor can be selected based on the requirement as shown below.

In the Selection Screen tab, Fields that needs to be displayed can be selected based on the business requirement.

The MetaNet contains MetaStars, MetaStarts contains MetaFields and is displayed in the system as an overview tree. The MetaNet is above the MetaStar in the hierarchy and is country-specific. It contains, for example, 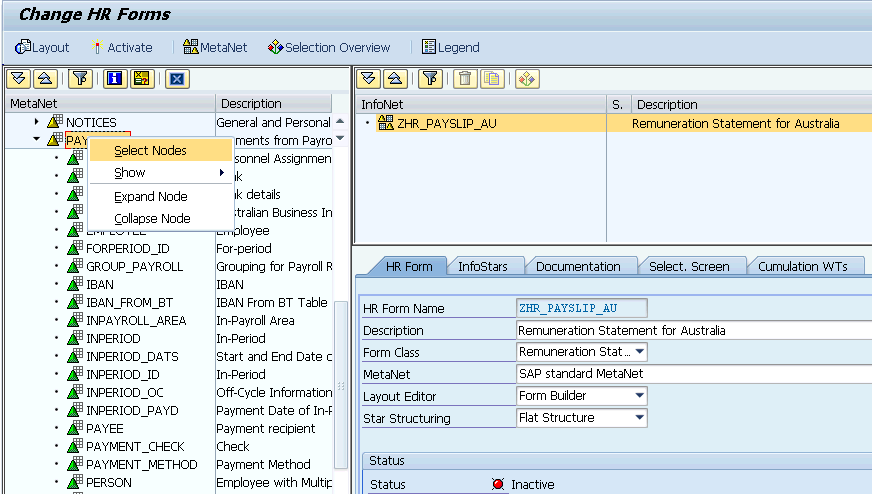 The Info Star names can be renamed and corresponding Meta Star name is displayed in the Info Star tab as shown in the Figure 7.

The Meta Field Details which consists of the fields under it can be seen by selecting the Show Details button as shown in the Figure 7.

Selection Overview can be used to filter the data by providing the selections in the selection table as shown in Figure 8. 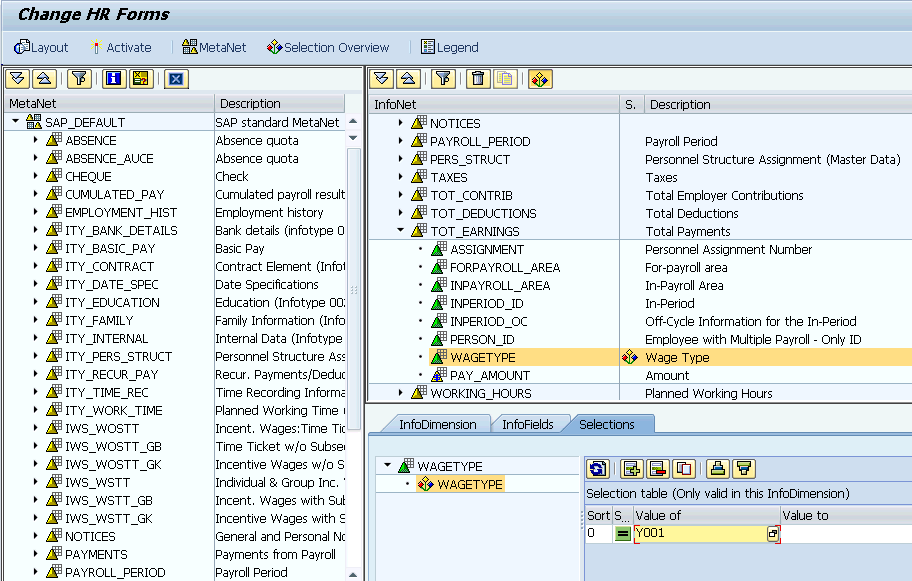 This ends up the creation of HR Forms Section . Next step is to proceed for Adobe Form Creation from the HR Forms Workplace.

Select the Layout Button, which navigates into the Adobe Forms exiting the HR Forms.

A Form Interface is created for HR Forms using Form Builder (Adobe Forms) as shown in the Figure 10.

Double clicking on the interface name will navigate the user to Form Interface where user can write specific code by creating fields in the global data.

The Form Interface appears as follows, which is divided into Form Interface, Global Definitions, Initialization and Currency/Quantity Fields.

Form Interface – To pass the data between the form and interface.

Global Definitions – To make data available in the form.

Initialization – To write the custom code and performs.

In the Context tab, use the drag and drop feature to select the data from Import folder of Interface section to Context section.

Under Global Data folder, the data which is created in the form interface is available. 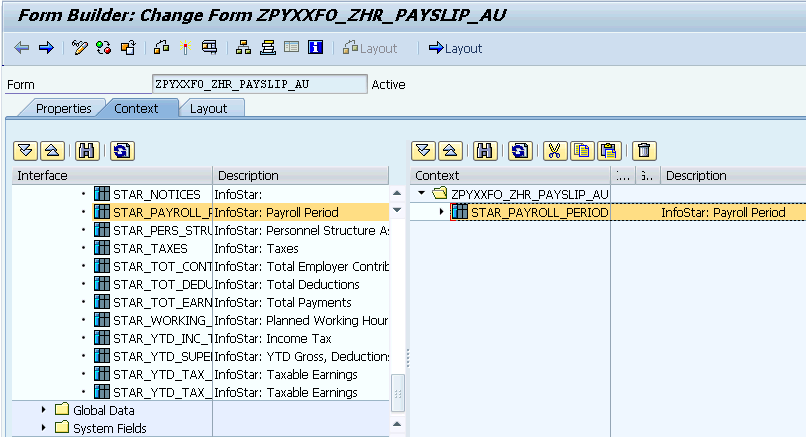 Under the context section, right click on the field and set it to active to appear or deactivate not to appear in the form layout as shown below. 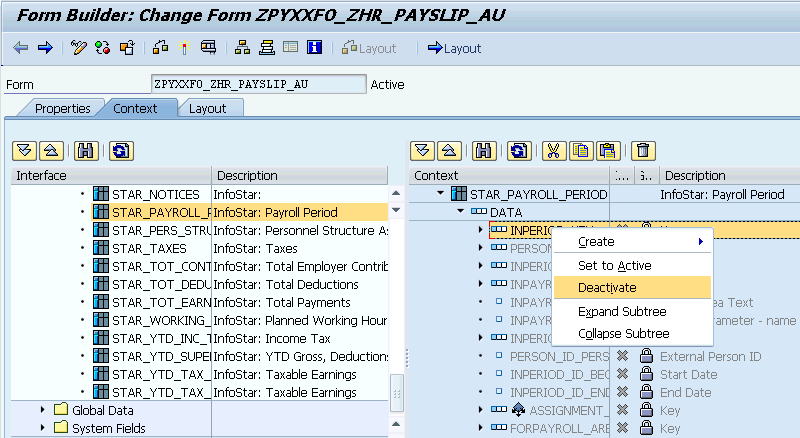 Click on the Layout button as shown in Figure 14, which navigates the user to Layout page of the Adobe forms.

Hierarchy – It consists of the hierarchy of the views designed in the form.

Data View – It consists of the data that can be used in the form by drag and drop feature.

The Layout page after the design looks as figure below. 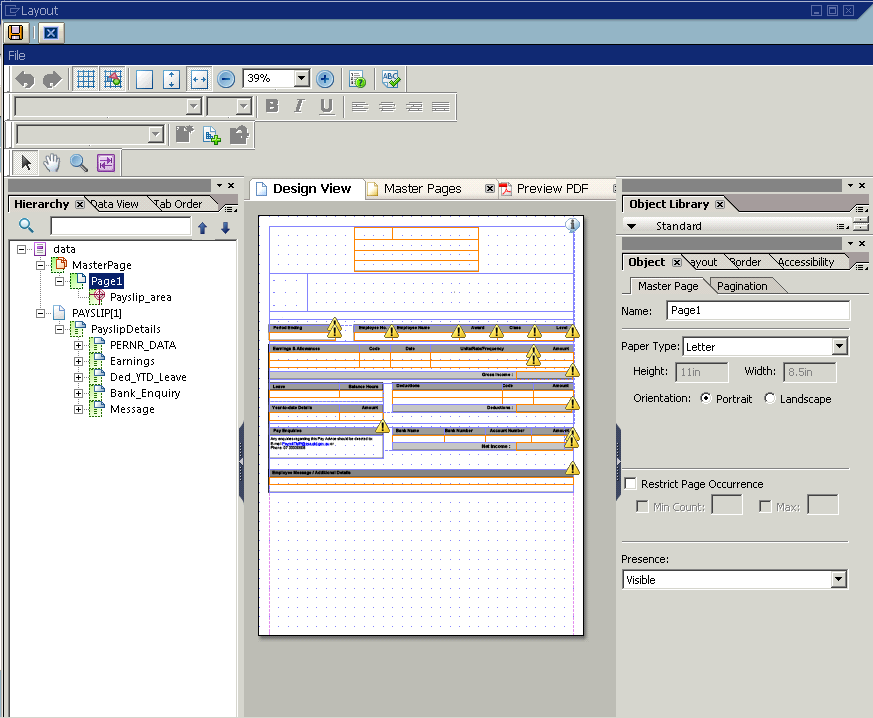 After completion, save the layout and activate the form, HR form.

Execute the HR Form, depending in the Spool Settings the Form is selected from HR Workplace & sent to Spool.

This ends the process of creating of HR Forms-Adobe Forms.