As IFRS (International Financial Reporting Standards) are evolving fast, we are continuing our focus on the latest IASB’s (International Accounting Standards Board) updates. Since our last blog published in August 2013, the following publications have been issued by the IASB:

A milestone in the financial instruments accounting reform

The amendments to IFRS 9 Financial Instruments published in November 2013 mark a further step towards completing this standard. As a reminder, this major project – aiming to progressively replace IAS 39 by IFRS 9 – has been divided into three phases: classification and measurement (I), impairment (II) and hedge accounting (III).

As regards the phase I “classification and measurement”, the first version of IFRS 9 was issued in 2009. Some amendments have been published since then, including the last one in November 2013 related to own credit. Others are currently under deliberation with a target date for completion for H1 2014.

Regarding “impairment” (phase II), the exposure-draft Expected Credit Loss was published in March 2013. The comment period has ended; the IAS Board should now examine feedbacks received. The final standard is expected to be published in H1 2014.

The amendments to IFRS 9 published in November 2013 introduce a new chapter on hedge accounting, thus finalizing phase III. However, there is still an active project on accounting for macro hedging activities, currently at an early stage with a discussion paper planned to be communicated early 2014.

Lastly, the amendments published in November 2013 also remove the 1 January 2015 mandatory effective date of IFRS 9.  A new date should be set by the IASB to decide upon when the entire IFRS 9 project will be closer to completion.

No other major publications in 2013

The other amendments listed in the table above do not call for comments. They consist in minor changes or clarifications to existing standards and will have, in most cases, very limited impacts. 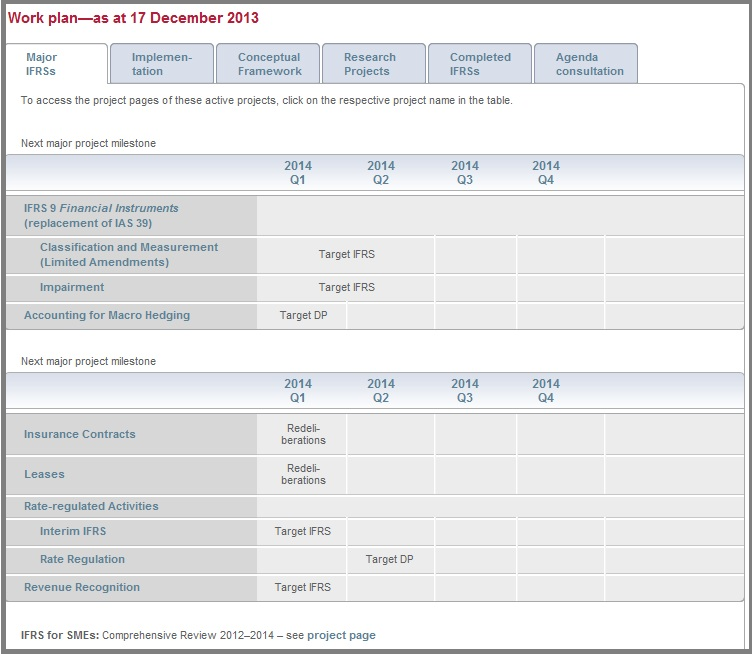 As explained in our last blog, three major topics come first on the Board’s agenda: financial instruments (see above), leases and revenues.

Regarding leases, the feedback received in response to the revised exposure draft published in May is more positive than the previous one (in 2010). However, many respondents remain opposed to the proposed changes. The IAS Board deliberations have therefore resumed, no target date has yet been announced for the final standard.

Some narrow-scope amendments are expected to be published soon (in Q1 2014): acquisition of an interest in a joint operation (amendments to IFRS 11), equity method – share of other net asset changes (IAS 28), sale or contribution of assets between an investor and its associate or joint venture (IAS 28 and IFRS 10). The SAP Enterprise Performance Management organization will pay close attention to these new or modified requirements as they may directly affect financial consolidation procedures.

In our next blog we will get into more detail regarding these amendments and their potential consequences on our starter kits for IFRS. We will also get back to the new chapter of IFRS 9 regarding hedge accounting from a starter kit standpoint. Stay tuned!