Last time round I showed you how VC could potentially be used for creating games and having a bit of fun. As this was well received I thought I’d go one step further from a simple Connect 4 game ( SAP Games….. In VC ??? – How To build VC Games ) and go all out to create VC Monopoly!!!

That well know family fun time favourite Monopoly, buy and sell property, then build you’re empire and demand rent from all the other players and collect £10 from everyone when its your birthday! 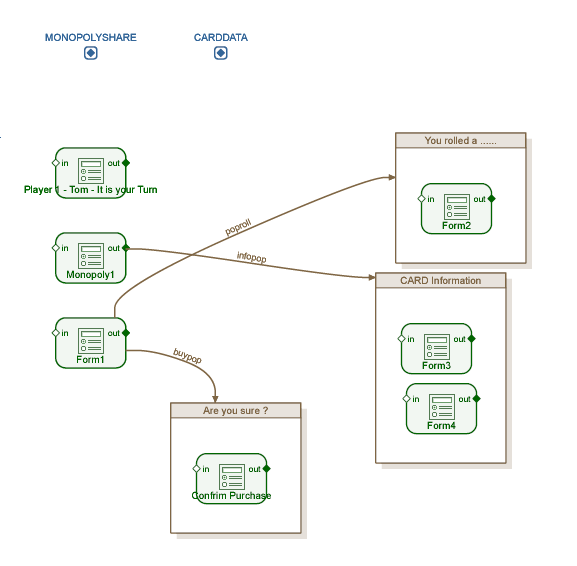 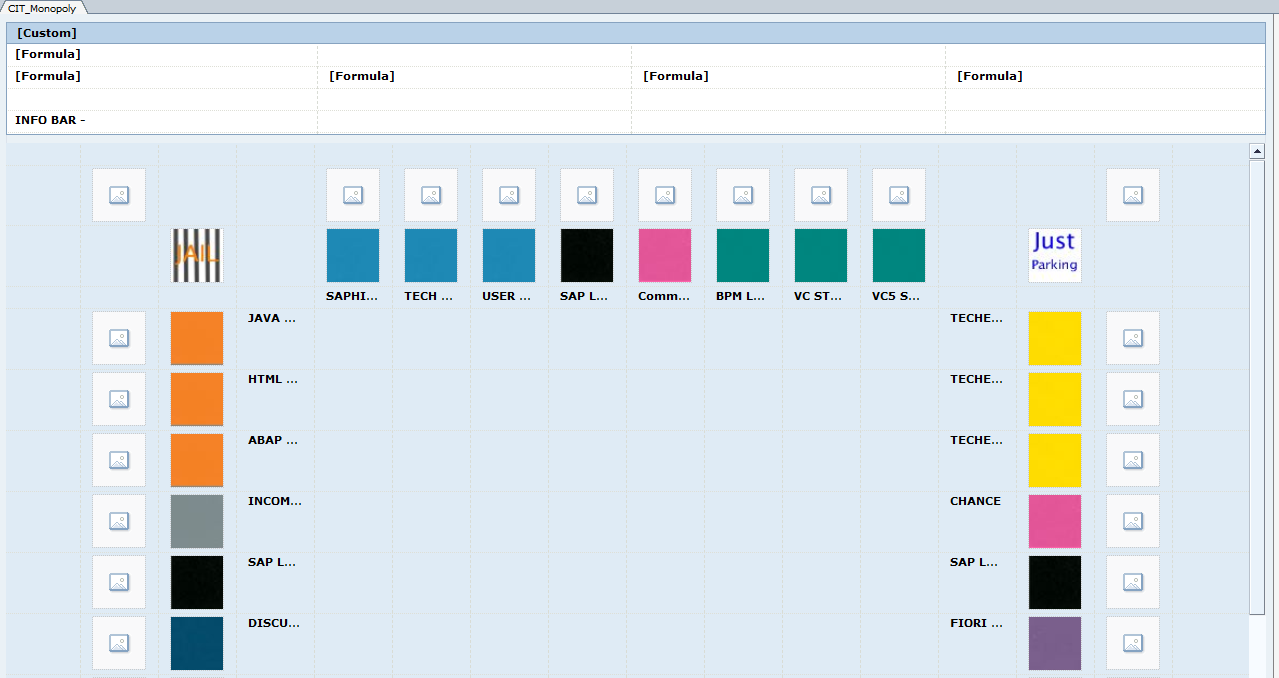 To build the Board I created a wide multi-celled form that I placed a square set of images in to hold the Properties and then an outer set of images to show when and where the players of the game currently are. I then added an inner line of text to give the properties names.

We are Talking BPM LANE / TECHED LAS VEGAS / ERP STREET and you know everyone wants to own VC & VC5 STREET! 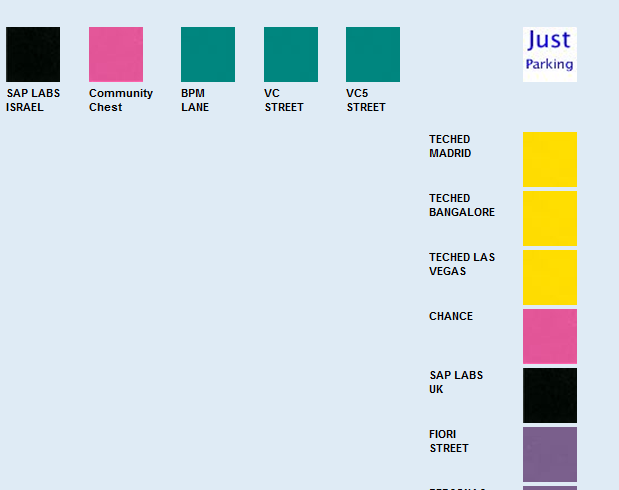 All these things needed to be considered when designing and eventually building the DataShares that would hold all these details. Once in place I could start to interact with the data in the share by button press actions. This in itself took many hours due to the amount of possible actions based on the current property you are sitting on.

It messed with my head for quite a while but once I’d got 1 Property set up for all facets of the game it is now just a matter of repetition A LOT OF REPETITION! I currently have 6 properties fully configured with all actions, I have also finished the dice roll where I can randomise the results from two dice (had to put in a little work around to ensure I never got a 0) purchase properties and manage a wallet based on the properties I had purchased.

Monopoly’s no fun on your Own! So I have started to add 2nd player functions to the Game, this is proving more complicated than I though as all of the previous logic needed doubling to allow for the second player, not to mention this introduced the idea of Rent when landing on another players purchased property. All of these 2 player aspects means that a lot of actions need to be called every time you hit the Roll Dice button to ensure that no possible scenario was missed. 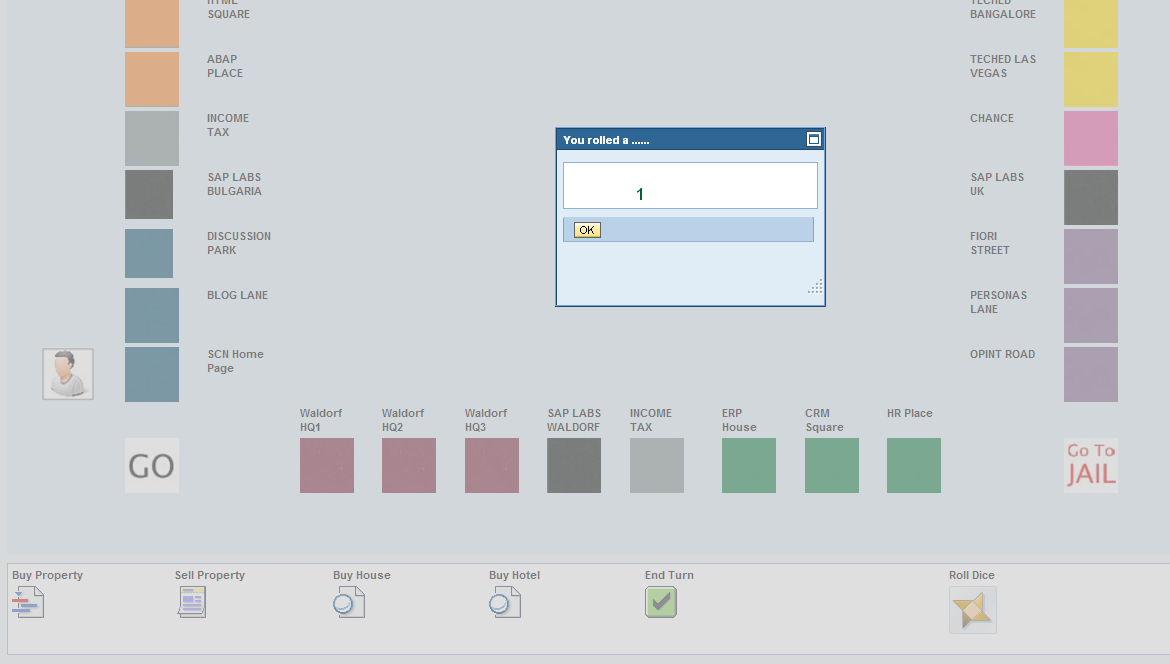 Finally I added some Web Images I made (then deployed to the PO box in a Library file) as the cards on the Board + a few extra ones for Jail, Go etc. Look and feel is its weakest point currently but I’m waiting on VC5 to see how it renders on my iPad !

Not heard about VC5 – VC5 Blog

I now aim to complete the game in the next month when I can find some spare time, once complete  I’m sure I will find a willing opponent in the office to test the functionality and game play.

Finally here are some more screen shots of the games current state. 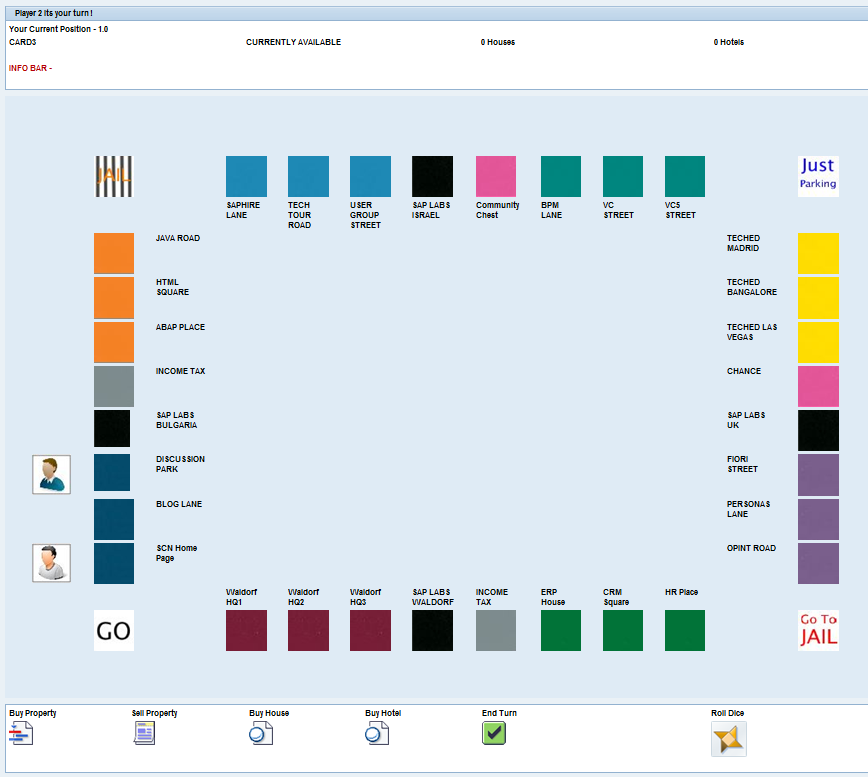 Just a bit of SCN fun for the New year, hope you enjoyed the blog  🙂 Check back in a month or So’s time for the completed game with video!

Would be expecting a How to link soon.

What an amazing work!

I am impressed that Visual Composer is still on.