Abstract: SAP has introduced the concept of Application Form which is majorly used for generating outgoing correspondence. For instance, generating a check in SAP can be achieved by creating an application form.

Transaction: The transaction to call application form in SAP system is ‘EFRM’, the interface looks like below. The various sub objects needed to complete an application form are:

This document will talk about form class ‘FI_CA_DME_CHECK’. As the description says, this form is used to generate correspondence in the form of bank checks. 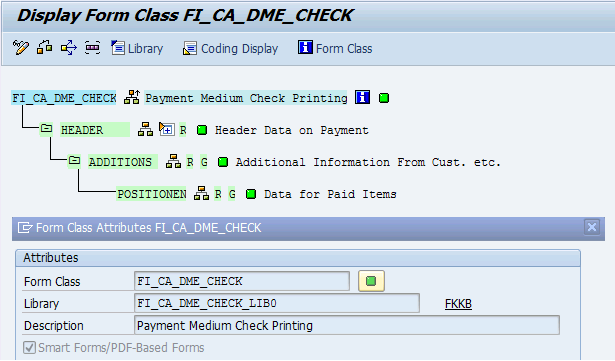 Each form class has a dedicated library which contains the form routines for a form level. Form levels are the backbone of the data hierarchy, and forms the foundation for an application. In the screenshot above, FI_CA_DME_CHECK is the form class where as HEADER, ADDITIONS, POSITIONEN are the form levels. Now, both the form class and form level share the same library. However, the form class library has the following content: 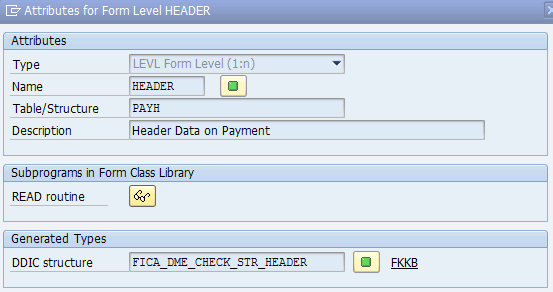 The attributes reflect that the form level HEADER is having 1:n relationship (HEADER -> ADDITIONS/POSITIONEN). The underlying data base table is PAYH which holds the header data of the payment program. Additionally,there is a READ routine specified for this form level. If you click on, the control will be taken to the form class library where this routine is defined.

This routine has a certain piece of code which enables reading the header data when payment program is triggered.

Similarly, form level ADDITIONS has its own set of routines and structures defined. 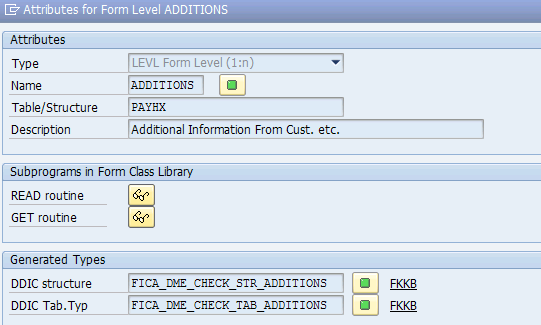 Form: the form type of an application form controls the configuration and the output of the form. Having a form is a MUST thing to create an application form. And once the selection is made from one of the following options, it cannot be changed later.

Based on what type of form is selected, the way the data should be processed is changed. For instance, if SAPScript is used for correspondence printing (check in this case), then standard texts (created via SO10) are assigned to hierarchy of the application form. Thus, the static or the dynamic data maintained in the texts is processed based on the hierarchy they are tied to.

However, incase smartforms are used as form type the relevant data is placed in the data structures when the print program is executed. So header data in this particular case will be captured in structure FICA_DME_CHECK_STR_HEADER. Texts: The texts feature in an application form is valid only incase SAPScript is used as the form type. The texts are created via transaction SO10 and are capable of printing static as well as dynamic check. For example, following standard text can be created to display the address on the check stub.

In the above screenshot, the standard text *****SAPDOC is linked to window SAPDOC in the SAPScript.

The standard texts are linked at HEADER and ADDITIONS form level. The window in the SAPScript with which the text is linked can be viewed by clicking on .