In a couple of weeks, I’m presenting a few sales training sessions on the theme of “social selling.” Here’s a summary of some of my initial thoughts – any feedback gratefully received.

IT Buyers are Empowered Using Social: Good News and Bad

Today’s IT buyers are tech-savvy and socially empowered. To make buying decisions:

Social selling does not replace sales, it enhances it. People buy from people who understand their business, understand them, and they trust to solve their problems.

The good news for sales: never before in history have prospects and customers publicly posted and updated information on their roles, responsibilities, and what they care about and are working on.

The bad news:  customers think they don’t need sales any more: they complete over 60% of their B2B purchasing decision before calling sales.

Social Selling is The Future of Sales: Big Changes Ahead

Customers’ self-driven research has resulted in a disruption to traditional “sales machines,” where a set of defined sales steps guide a customer towards a deal. Now, “what was once a tidy funnel now looks like a mad scientist’s chemistry set.”

Sales people are aware of the trends and realize that they have to change if they want to avoid being relegated to a simple product fulfillment role.

73% of them believe selling will be radically different in the next five years, 69% think the buying process is changing faster than sales organizations are responding, and 40% see social media as important to their success. This last number rises if you look at the most successful sales people (65% believe social media is integral to their sales success) or the fastest growing regions (73% of sales people in China believe social is important to sales – and 38% of them report using personal blogs in their selling process).

There has been a huge sales in networking possibilities using services such as LinkedIn.  “Always be selling” is turning into “always be connecting.” And rather than “selling high”, sales now people triangulate and use real-time information (via Twitter, etc.) to help propose solutions to companies’ most pressing needs.

But sales people can’t just trawl for deal opportunities. The highest rewards of social media come to those that add the most value:

Sales people should increasingly target organizations in a state of flux rather than those who understand their needs, seeking out skeptical change agents over friendly informants, and not being afraid to challenge and push customers out of their comfort zone.

Have you had any B2B interactions with IT vendors that were great examples of social sales success (or disaster?). (Initial feedback from IT execs on Twitter seems to be along the lines of “IT Vendors? They just retweet when I say something nice, rather than provide any value”.)

What is it about today’s sales cycles that bugs you the most – and will social help? 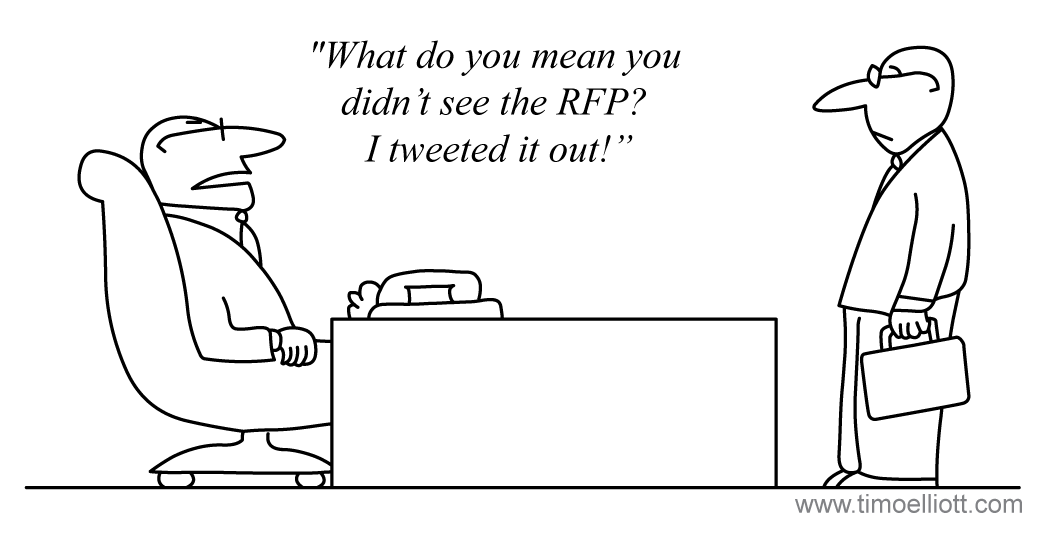 The cartoon above brought the following reaction from PepsiCo’s Yelak Biru:

This reminds me of a Randal Pinkett’s, the winner of The Apprentice show with Donald Trump, ITSMF Awards Gala key note a few years ago. The story, paraphrased, was “He had an intern working for him. He needed to get information from her over the weekend for a project he had to deliver on Monday. He sent emails, he left voicemails, he even embraced technology and Texted her. Her response was “That was so yesterday… You should have posted on my Facebook.”
The moral: To be effective we should modify our communication style depending on the situation and the person(s).

Sounds right to me!