Using the BEx Broadcaster, one can precalculate and distribute Web templates, queries and workbooks. You can distribute these reporting objects either in precalculated form or as an online link. Your distribution options include sending by e-mail or exporting into the (SAP) Enterprise Portal.

There is no way to broadcast directly on third part tolls such as third-party file server, Web server or document management systems. In this white paper we will discuss how to broadcast file to non SAP portal/Share point site.

There was a requirement to broadcast to non SAP portal using standards SAP BEx broadcasting features. As per BEx broadcasting, it support either email broadcasting or broadcast to connected (SAP) portal. Client wants to use their own share point site/non SAP portal to store the daily broadcasted file, so that everyone in organization can have access to those broadcasted reports. They don’t want to use the SAP portal to store the file as they are not going to maintain user at SAP portal side. All users (including SAP users) need to get the broadcasted file from share point/non SAP portal only. The file storage is going to happens at share point in addition to the user maintenance. So from SAP side, it needs to broadcast the file on daily basis to share point using process chain and make sure there is no error while sending. We can use Knowledge management (KM) as either a WebDAV client or a WebDAV server. As a WebDAV client you can use KM to access documents which are stored on other WebDAV enabled servers. You need to configure a WebDAV Repository Manager to do this. For example you could configure a WebDAV Repository Manager which points to a repository on another portal server.

There is no standard/direct way to broadcast to non SAP portal, the only way to go for it via SAP portal i.e. first broadcast it to SAP Portal and then try to move the file from SAP portal to non SAP portal. There is option to use Federated Network to manage all portals (SAP & Non SAP) under one umbrella and manage above scenario. But again it’s depends upon total cost of investment for federated network and it’s requirements.

After analysis, it has been decided to use WebDAV repository to broadcast directly to Non SAP Portal. Web Distributed Authoring and Versioning (WebDAV) is an extension of the Hypertext Transfer Protocol (HTTP) that facilitates collaboration between users in editing and managing documents and files stored on World Wide Web servers. We used the option of Information broadcasting by storing the documents in the consumer portal (Non SAP Portal).

Since the file has been broadcasted to consumer portal, the required security and access for broadcasted file needs to be maintained at non SAP Portal side. SAP security/analysis authorization will take care of data in the workbook which is ultimately broadcasted.

3.     Define a folder or subfolder of the WebDAV repository manager in the producer portal as the entry point.

Under Repository manager navigate to

A WebDAV repository manager stores documents on a WebDAV server. If you want access control setting to be mapped from/to the server, you have to use the WDAclSecurityManager. In this case, the WebDAV server has to be in the same user domain as the portal server. Unless specified otherwise, the proxy settings of the Java virtual machine are used. You can specify a proxy host and port, or a proxy system of the system landscape service. The latter is required to apply user mapping.

We will take the scenario of creating a WebDAV repository which points to a repository on another portal server. The first step is to create a HTTP system. 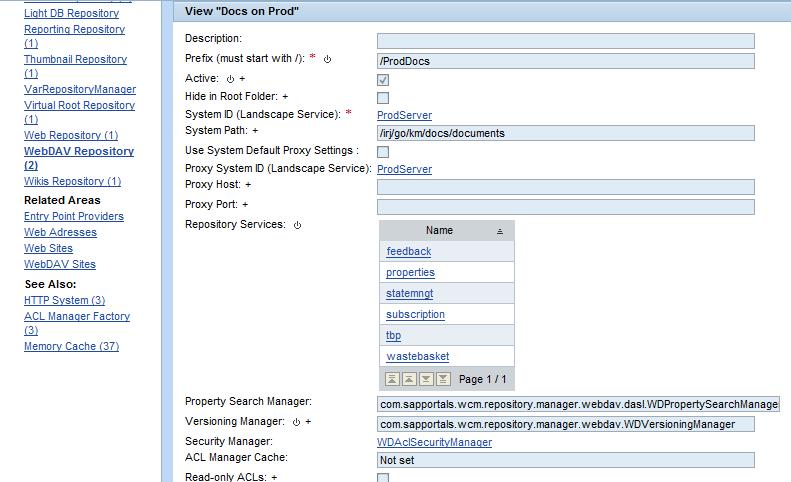 6.       The System ID parameter must be the ID of your HTTP system created in step 2 above. The System Path parameter can be used to specify a suffix to the HTTP system. For example, if you had a HTTP system pointing to http://hostname:port you could specify a System Path as /irj/go/km/docs/documents. This allows you to use the same HTTP system more than once. The Server Type parameter should be Generic WebDAV Server unless you are addressing an IIS or Apache moddav server with this repository manager

You have set up information broadcasting using WebDAV repository managers.