During the later part of last year had to develop a set of quick&dirty reports in a proof of concept project where the ETL-cababilites of IdM were demonstrated. I used the Initialization/Termination/Entry scripts and it gave me an idea to write a blog about using them. I am not sure how the basic IdM training course by SAP addresses these topics but if it doesn’t and since not all the new IdM’ers participate the training, so maybe this helps someone in getting started or gives some ideas.

In IdM passes you can define the following types of custom scripts to be triggered upon execution of the pass:

Consider following dummy toGeneric pass as an example. It runs a dummy SQL-statement in Source-tab that returns static text as a result set which gets passed to Destination-tab. The passed entries are “processed” by the scripts in Destination-tab.

The Source-tab’s SQL-statement returns two dummy rows (or records, or entries depending how you want to see them) to the Destination-tab.

The Destination-tab calls all the 3 types of scripts possible in toGeneric-pass plus getCount-script in the attribute mapping. What ever is returned by getCount-script gets inserted into it’s place in the table cell and is passed to the Next Data Entry script among the other attributes defined in the mapping.

Execution Order
Let’s examine the job log and see the execution order plus what the output was. All the scripts in the example output their name plus what was passed as parameter.

So the execution order is:

The Initialization Script was called first and from the output it’s visible that while it received the parameters in Par-object none of the macros were executed. All the values appear as they were typed in the Destination-tab.

In the example we have one custom variable called “theCount” and as it is introduced outside the function definition it becomes global variable and can be used in any other scripts in the pass as long as the other script also defines the same global variable. Variable theCount is set to initial value 0 in the Initialization Script.

Like the name suggests and output displays the Initialization Script is called once.

The Entry Script in Source-tab is called next. Based on the output the hash table “Par” has it’s elements fully translated to data contents. The example uses Entry Script in growing the counter variable by one and storing the new value to Par to be used in the Destination tab. (BTW, for some reason having an underscore in the element name, for example “THE_COUNT”, crashed the pass.)

The Entry Script is called as many times as the Source-tab definition returns rows.

The Next Data Entry Script in Destination-tab is called next and again it is called as many times as the Source-definition returns records. It receives the full Par-hash table and it’s correct values along with the values we just manipulated in the Entry Script.

The Close Destination was called as second to last.

The Termination Script was the last script to be called.

The example job has two passes; first one that loads data from CSV-file to temp-table and another pass that reads the contents of the table and writes them to HTML-file. 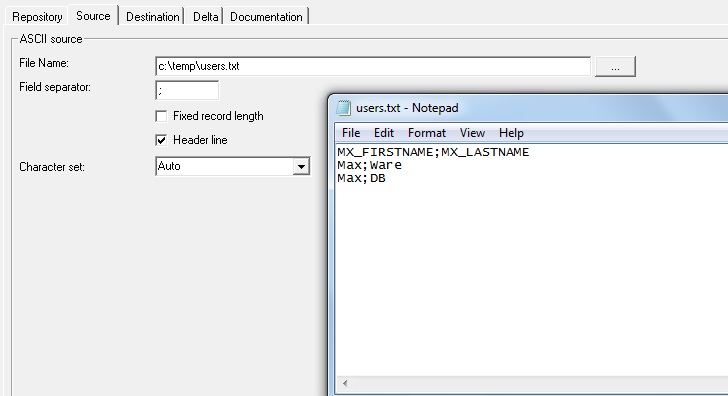 The destination has just file vs. table attribute mapping. I always name the columns in files after the IdM-attributes so it simplifies the “interface” and it sort of documents itself.

Writing plain text file or file with CSV-structure is pretty easy from IdM as all that needs to be done for the formatting are the column/attribute-mapping and defining the CSV-delimiter, headings etc.

HTML is slightly trickier as all it’s possible to output in the Destination-tab are the repeatable elements meaning just table cells. The start and end of the HTML document plus start and end of the table must come from somewhere and this is where Termination Script is handy. 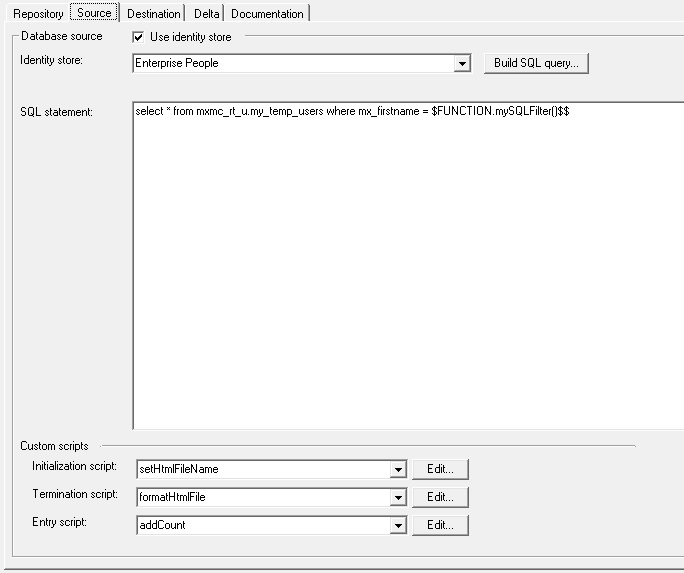 The source SQL reads the entries from the temp table. Note that it’s possible to have a JavaScript in the SQL-statement.

The JavaScript is executed first and whatever is returned by mySQLFilter gets embedded into SQL. Good exampe on how to use the JavaScript within SQL can be found from the BW-interface and how IdM sends the data to SAP BW via LDAP push.

Initialization Script is used to generate the somewhat unique filename from timestamp. Name of the file is stored to global variable so that the name is accessible for other scripts. The colons are removed from the file name with uReplaceString-function. The Initialization Script also sets the counter that is used in counting the rows to zero.

Entry Script just grows the counter like in previous example. 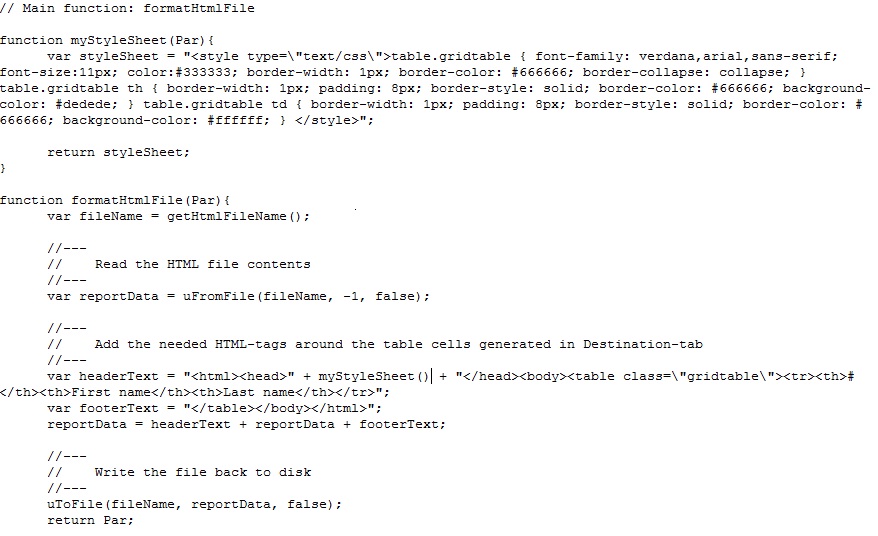 The HTML-page uses a style sheet that is returned from script just to demonstrate that there can be more than one script in the script “file”. 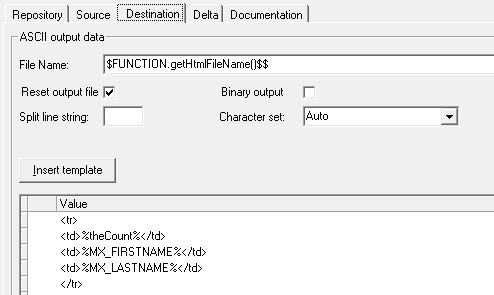 The destination has simple attribute mapping that writes the HTML-table rows to the file.

The output filename is returned by a script getHtmlFileName, which just returns the value from global variable. 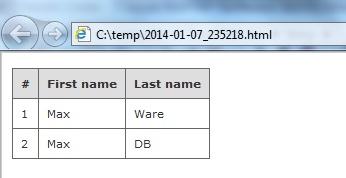 Great stuff, Tero.  You bring a nice level of clarity to this topic!

While I've never had to use all six slots for scripts, knowing in what order they would all process is worth the read on this blog entry alone. Thanks Tero!