To Train, and How to Train: That is the Question

When it comes to new technologies or fads in the training world, I usually step back and think about why or why they won’t succeed. A few years back Podcast were all the rage and everyone was going to be listening to their training. Then came about a dozen other fads like YouTube, Blogs, Wiki’s etc. I can’t tell you how many presentations I heard where the speaker described how everyone in the company was going to publish a blog and edit Wiki’s and how this would eventually replace formal training. The latest hype has been around Mobile Learning which I honestly thought was just as much of a fad as the others for training, but I may be wrong. In fact, I now believe it has real potential but not in the way it is currently being thought of. 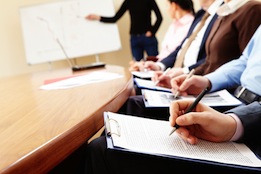 Today everyone is talking about making everything mobile when it comes to content. Developing mobile content is not as simple as you might think so we have plenty of bad content out there right now. For this blog entry, I want to focus on the future but understanding the most common mistakes will help explain why mobile is so good.  For this post, my definition of a mobile platform is something with a touch screen and less than 10” of viewing area.  Otherwise, you really are talking about a browser with a non-standard OS and touch screen.  For most applications, a reasonably sized tablet has about the same capability as a notebook computer.

The following are two of the most common problem misconceptions about mobile and why I originally thought it was just a fad.

Industry analysts and others are claiming that mobile will be the first choice when it comes to learning material. I find that hard to believe because it isn’t true for any other experience. In fact, we only use mobile out of convenience not because it is the best platform. For example, if you have a choice of watching a movie on your TV at home or on your phone, which would you pick?  The same is true for reading documents, editing spreadsheets or anything else you might be doing.  However, if you are on a plane and stuck on the runway, your phone is probably the device of choice for both entertainment and work.

Not all content can simply be reformatted and have it work effectively on a mobile platform.  A mouse is a much finer pointing device than a finger, and onscreen keyboards are often cumbersome when working with information on the screen.  This means a considerable amount of work should be done to make the content effective on a mobile device.  The training industry has made this same mistake twice before.  The first time was in the 70’s on some of the first mainframe based computer terminals designed for training.  More recently there was a trend during the late 80s when companies introduced computers like the IBM Info-window and Visage Touch Screen.  In both cases, the content that was designed for touch worked fine when using a mouse, however the content designed for a mouse was almost unusable with a touchscreen. The latest example of this mistake can be found in Microsoft’s Windows 8, where half of the interface has been re-engineered for touch while the legacy interface is still best used with a mouse. Once again, using the touch interface with a mouse is fine, but trying to edit documents with your finger is frustrating at best.

So why do I think mobile may actually transform the industry?  For the past 30 years people have been talking about just-in-time training (JITT) and how you could deliver the right material to the right person at the right time and make them more effective.  Although this is a great idea, it has never taken off because the majority of people who required JITT were not at a desk when they needed the training. Instead they were in the field, working in a factory or someplace where they couldn’t easily access a computer.

I believe that over the next five years we will begin to see a new type of learning management.  One that matches what is on your calendar with your work and training history then determines the type of information you need in order to successfully complete your day.  The training material would be similar to procedure training combined with an electronic performance support system (EPSS).   One example of this might be for a sales rep.  The company Mobile Learning Management System (MLMS) would recognize that this individual is going to visit a technology company in three days. It also identified that the last time this person sold the product, the deal didn’t happen and that they haven’t had any training on the latest version of the software.   The MLMS would proactively push a short piece of content specifically designed for a mobile device and this scenario along with reference material and an email containing a link to the more comprehensive training.

Unlike Podcast and a number of other technologies, I think mobile doesn’t actually replace traditional e-learning, but solves a legitimate problem of how to get people information when they unable access a computer.   I also believe it can and will make JITT a reality for everyone.  Much of its success will depend on how good the predictive aspects of the systems are and how well the content is designed.

You can also join Chris Cowan, Management Consultant, Booz Allen Hamilton Corporate Headquarters and me on January 27, 2014 at 11:00 – 12:00 PM ET, for The Current and Future State of Mobile Leadership Development (mLD) virtual conference.