I was always curious to know more about the automotive industry spread across the world. Brands and automotive groups interested me a lot. Now, SAP Lumira has given me a platform to present the findings in a pictorial format. In this blog I have tried to show automotive manufacturing trends  using the results I got from SAP Lumira. I have tried to explore the number of vehicles manufactured in the world for the past few decades and mapped down the trend of production of various category of vehicles. The countries leading in manufacturing are also been mapped and results are presented in various forms using tables, pie charts, line graphs etc. The findings are based upon the data which is taken from Wikipedia.

This research led me to find out the answers for the following important questions:

1) Which brand has manufactured the highest number of vehicles in 2012? (Top Brands)

i) We were also able to find out who was the highest manufacturer of Car, LCV, HCV and Heavy Buses across the globe for the year 2012.

2) Which country has been the highest manufacturer of vehicles in the year 2012?

i) We can find the production trends across the past few decades.

Intially, let’s have a look at the trend of yearly total production from 1997-2012. This has been demonstrated by the bar chart and a radar chart below, with Y-axis being the production in millions and X-axis being the years from 1997 to 2012.

Line graph depicts a better picture of this trend along with another variable included-(percentage change in production yearly).

After getting the picture of total yearly production , I wanted to refine the search a little more. I was more curious on knowing the Vehicles manufactured by each group and then conclude which group has manufactured maximum number of vehicles in the year 2012(Statistics were available till 2012). Below are the details of production for top 20 Automotive Manufacturing Groups.

Below chart shows the total production by each Group in the year 2012:

Pie chart explains the share of each group in the total production for 2012 in a better way: 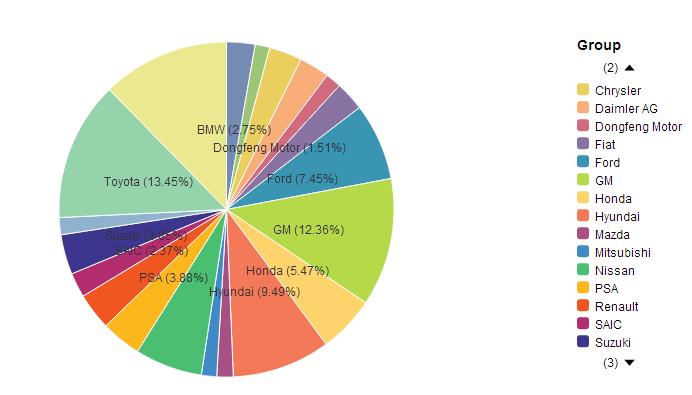 Vehicles are classified into four basic types based on their use. They are

Now the need arose to bifurcate the total production of each group in 2012 into these types.

The total production was bifurcated into various vehicle types and the graphs were plotted using SAP Lumira. The results are as below:

This bar chart explains the bifurcation for each group in the year 2012.

SAP Lumira provides powerful tools to make the visualization more explanatory and easy to understand. This is explained by another chart alternative to the above one.

Isn’t it explanatory enough? This chart provides a better visual of the bifurcation of total production of each brand recorded in the year 2012.

Now based on the total production of each brand I simulated a Tag Cloud which looks as below.

Classifying the groups according to the number of vehicles manufactured.

I got the following results: 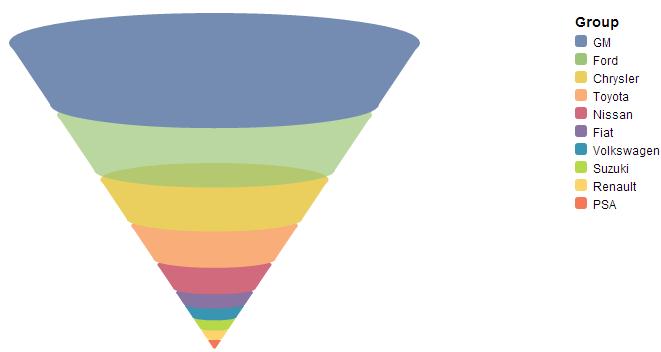 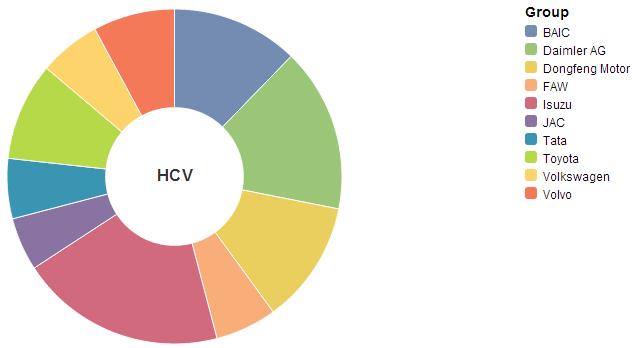 Total production made in different Countries is also an important trend to note about. I have made an analysis for the same.

I have made a graphical representation of the total production for the Top 20 leading countries (Number of vehicles manufactured) based on the statistics for the past few decades. Below graph represents the same.

Based upon the production statistics for the year 2013 the top countries are represented by the Tag Cloud shown below.

The same is represented by a Geo Bubble Chart as Below :

Based upon the analysis following things could be concluded.

8.       In the year 2012 China has superseded other leading countries like USA and Japan by manufacturing highest number of vehicle units.

Thanks Jitendra. Comments like this motivate me take more efforts on such blogs.

It's great to see how you used many different types of visualization to display data.

I was hoping to see a geo chart!! They're one of my personal favourites...

Would you be able to share the link to the data that you used?

Lumira makes it very easy to consume such data, looking at the difference in countries and having China's 2012 data SPIKE! *exciting* 😎

Thanks for your constructive comments, I have updated the blog with a Geo Bubble chart.

*great big smile* 😆
WOOOoooOoooo!!!! Thanks~~~ I see it didn't take you very long to get that either!!

If it is not too much trouble, would you share your dataset, i tried to generate it myself using the sources you mentioned but i ended up with just countries and types of cars but not the motor companies.

I would greatly appreciate it.

I am not sure if I have the file handy, I will check and send it to you.

excited to have my blog to be part of the final list. 🙂

This is awesome. The Visualizations are done very well and looking at it one can easily comprehend the story here.

It is really informative article and graphical depiction of all the major car companies and their production rate is very appreciable. At present a race is going on among different cart manufacturers to service better than all. It is really hard to say who is leading but interesting thing is that this competition has become beneficial for customers as they have extensive selections to choose the best. Extent of automobile industry is not limited merely to car manufacturer companies but it ranges up to designing, marketing, selling departments as well as service centers, auto part dealers and maintenance team.