Innovation on the go

All of us have been frustrated by long queues at toll gates while travelling on highways. We generally curse the operator, while we wait for precious minutes, which feel like hours, reach the head of the queue, pay the requisite amount, and press down hard on the accelerator. However, today I am writing about some really innovative people who decided to transform their frustration into a creative force and designed an app to simplify the process of toll collection.

I interviewed Krishna Kumar and his team of developers immediately after they had won the winner’s trophy at the SAP TechEd Bangalore 2013 Demo Jam. They had just had their six minutes of fame during which they demonstrated their software to enthusiastic applause. Sleepless nights must have gone into preparing for those few minutes, and creating an application worthy of winning the grueling competition. Yet, they were vivacious, and enthusiastically explained the features of their product and talked about their delight in winning one of the most prestigious developer contests at SAP, without any sign of tiredness. Or perhaps it was just the adrenalin rush that was driving them on! You can read the full interview with these young and brilliant developers from SAP Labs India Bangalore below.

l  How did you first get the idea of working on the Product?

Any person travelling a lot spends too much time at the toll booths at some point or the other, especially during holiday seasons. We understood that there are difficulties from the perspective of the infrastructure company also who lay the roads, manage contracts and need to collect the toll money to make their business. We wanted to develop a software that addresses commuter difficulty, helps the infrastructure  companies and manage the whole life-cycle. When we started thinking about it more deeply, it developed as an end to end concept and we felt that it will be a great idea to present at a forum like SAP TechEd. 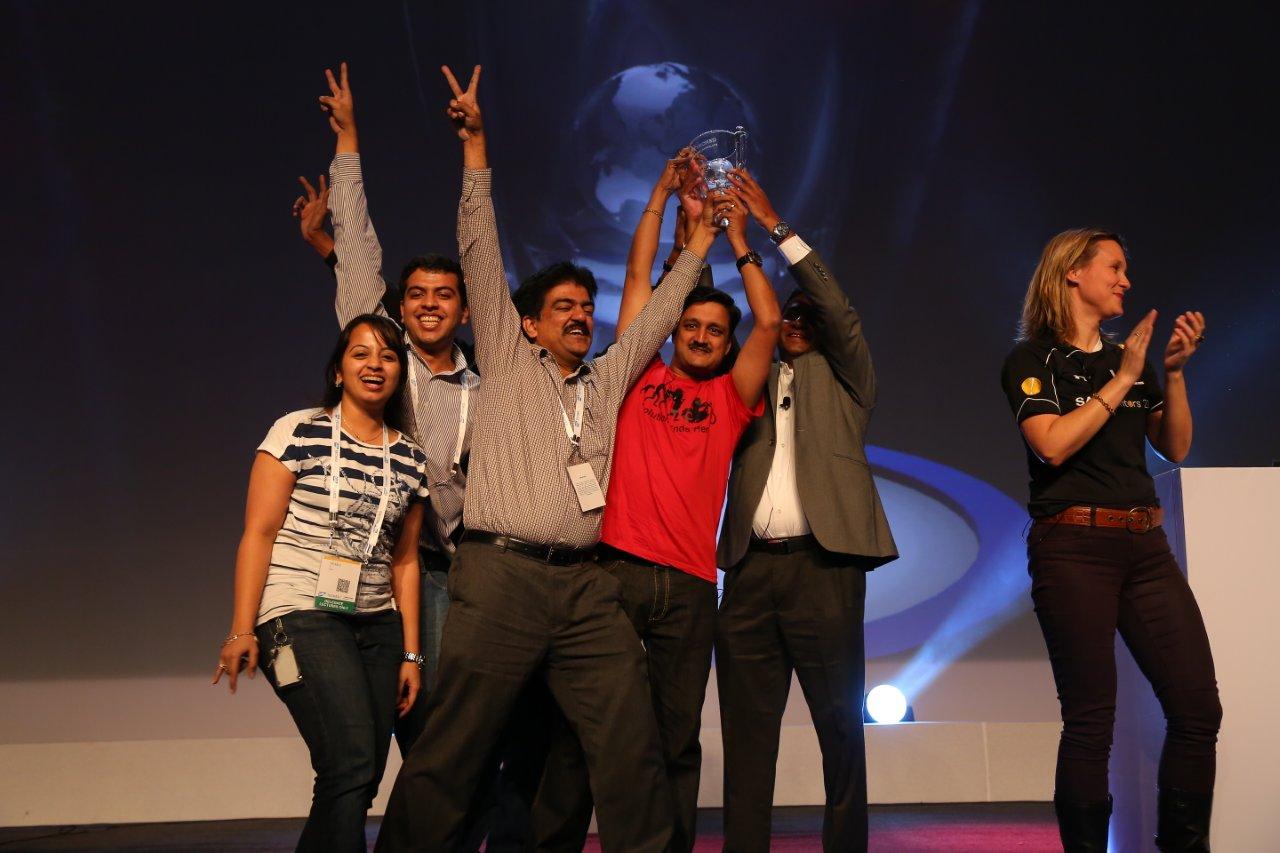 l  How long did you take to work on this idea/ please share with us your journey from the idea stage to the Demo Jam Day?

We have been working on this idea for almost 6 months. Since we work in custom development, our focus was to make a realistic and implementable product that will benefit our customers, their end users and finally add to our growth in SAP. Each of our team members brought a unique perspective to the table and it was a pitch perfect story of team-work that has led us here. We had KS Muraleedharan, Dharni Lakshmi Narayan, Peachimuthu, Arun Chandran, Uday Vir Singh, Raghunathan MS in the team who developed the different technology components like Cloud app, HANA analytical views, End user Mobile app, ERP back end, Lumiera graphics and last but not the least, the colorful model for the Demo jam stage,

l  Who did you consider your toughest competitor at the demo Jam?

Krishna: We like the IRCTC railway portal optimization for their innovative concept and We also liked “Intelliden” for the next generation thinking. We felt these two entries were major competitors for our solution out of the Top 6 DemoJam entries.

l  What are your next steps after winning the event?

Krishna: We are trying to convert our application into a self-contained product. We need to collaborate with partners who can reach out to infrastructure companies. Some companies have already shown interest in the new technology and we will convert them as live projects soon.

l  Please explain the features of your product.

On most highways toll collection is conducted directly by the infrastructure companies which build, operate and maintain roads. They typically use manual toll booths or some purpose-made device for automatic toll collection. This solution is however region-specific and lacks universal automation: the same payment device cannot be used in different parts of the world. We aim to solve this problem by using a smart mobile with NFC (Near Field Communication) capabilities as the universal device for passing toll-gates. We aim to remove human effort and reduce TCO in the toll software and its billing and settlement process.

We deploy a cloud based application that caters to more than one Infrastructure Company. The infrastructure company benefits by placing a NFC receiver in their existing setup: they save time, costs, billing and invoicing effort, and manual labor.  The back-end settlement process is real-time and HANA-based. Accurate billing and invoicing via payment gateways help the commuter and also the corporates. It saves time and ensures smooth traffic on highway. It solves the problem at both sides – commuter/customer as well as the toll company. Analytics on big data of nationwide commuters will also help in fine tuning public administration. More details can be viewed in this video http://www.youtube.com/watch?v=5VYYnS75F1I 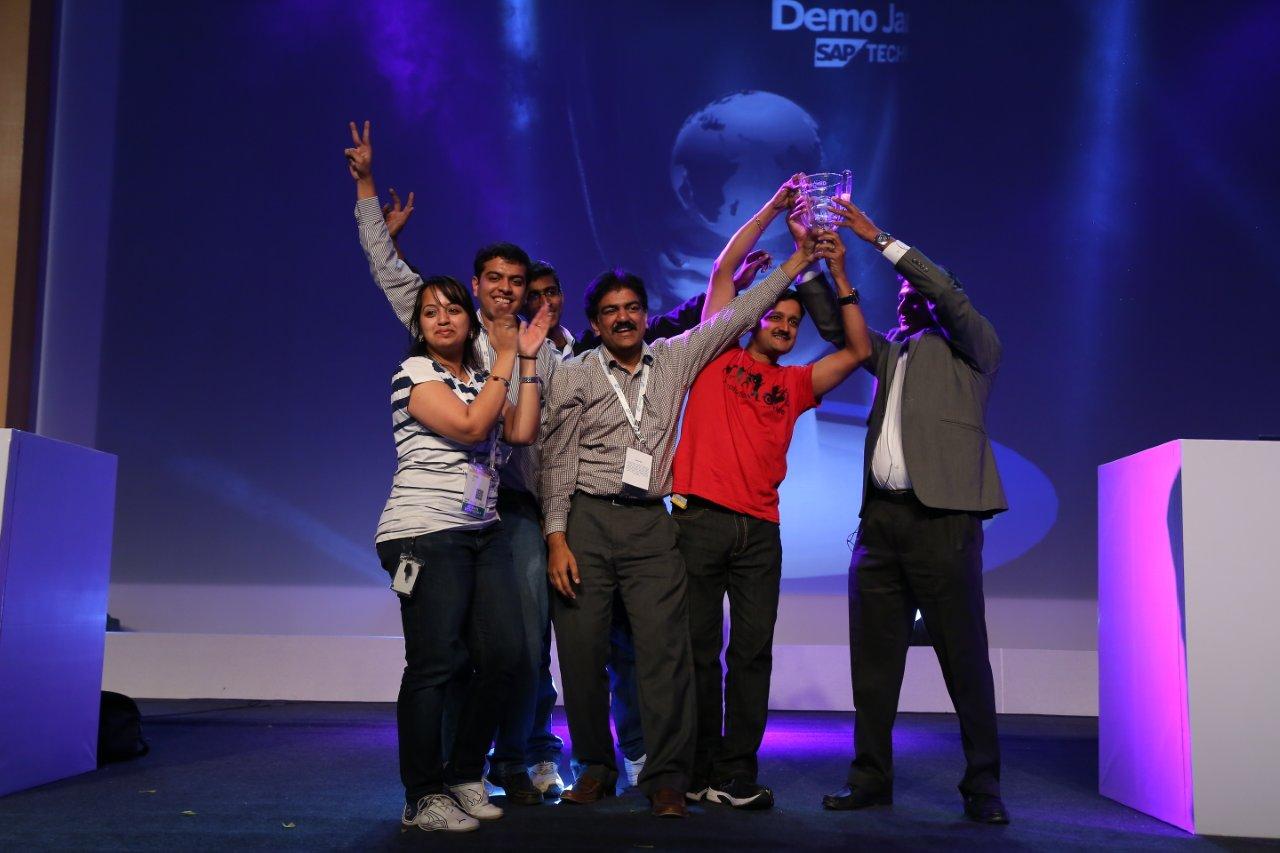 l  How was the experience of participating in such an event?

The experience is always electric. Those were the proudest moments in our careers. Winning the SAP TechEd Demo Jam was our dream for the past 2 years. We had also participated in two earlier Demo Jams but had been runners up. The moment when we were announced as winners and could finally hold that trophy was truly breathe-taking and unforgettable. Claps from more than 10000 people to decide the winner was the most encouraging part of the whole show. The videos of the demo jam and SAP TV interview are shared below.

The demo on stage – http://events.sap.com/teched/en/session/8841