With the advent of HANA, there have been confusion regarding the future of SAP BW like whether it will survive in HANA era or not, if it does survive then what role will it play and many other questions are there in the minds of BW users. Regarding this, SAP has been putting a firm stand constantly, that BW and HANA will coexist where BW role will be that of Data warehouse and HANA will take over as the platform where all the analytic will be performed either as standalone or on top of BW on HANA.

Keeping this in mind, SAP has been constantly trying to integrate BW and HANA with its every new release, it started with SAP BW 7.3 where SAP introduced options of in memory DSO, Cubes, using HANA as a DB etc and is continued further in recent release of SAP BW 7.4.In this release, SAP has introduced several new features and enhanced some of the existing features of BW 7.3. For the basic idea about these features, you can refer to the link mentioned below:

In this blog, we will talk about one of the new feature which caught my attention during Tech Ed in Bangalore is Open ODS layer. In its previous release SAP BW 7.3, SAP introduced in memory DSO & cubes concept for directly consuming HANA based tables/views data in the BW info-providers and leverage the concept of in memory in BW.Now, in their recent release SAP has come up with a new feature known as Open ODS layer by which we can directly consume the tables/views created in HANA without the need of storing the data in BW (although if required we can store the data in BW as well). Besides, supporting HANA this new layer will support some of the other databases as well like Teradata, Sybase ASE/IQ  & Hadoop. 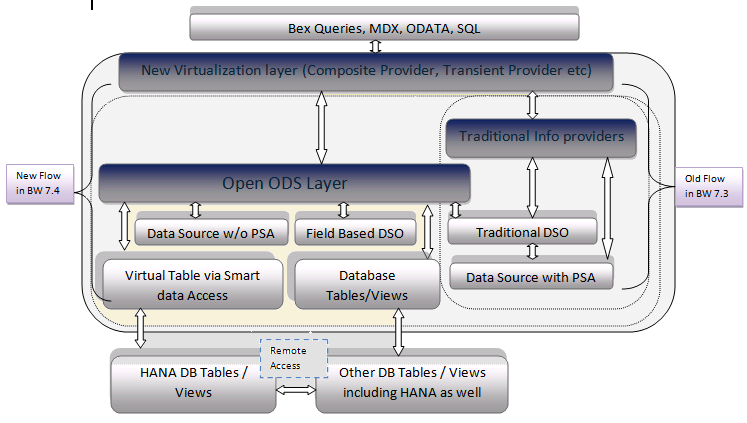 Above block diagram, gives you the high level overview of the new BW 7.4 data flow of Open ODS view along with Traditional data flow.As can be seen in Open ODS, we can access source system in multiple ways as mentioned below:

In Virtual Table via HANA Smart Data Access, make other DWH’s transparent to HANA i.e. a virtual table is created in HANA for the source system table from which we are trying to display the data in BW and this virtual table is then referred by Open ODS to display the data in BW. Whenever, a report on top of this Open ODS is executed direct read happens between BW and HANA virtual table which in turn hit the relational or non relational data sources by ODBC just like an local table. So, while creating an Open ODS we need to specify the remote source, source system and respective table/views from which the data needs to be displayed in it.

In Data Source, we can create an Open ODS View on top of the existing Data source in BW. While creating an Open ODS we need to specify the source system and respective Data Source name from which the data needs to be displayed in it.

In Data Store Object, we can create an Open ODS View on top of the existing Data Store Object in BW. While creating an Open ODS we need to specify the respective Data Store Object name from which the data needs to be displayed in it. In its recent release SAP has introduced a new type of DSO, Field Based DSO, wherein we don’t have to create info objects and include them as key field and data field in our DSO like we did earlier. All of these, will be taken care during DSO creation and we only need to categorize the fields as Key field, data field etc afterwards. So in short, a field based Data store object acts, beside the fact that it is not using Info Objects, like any other Data store object.

In Database Table/Views, we can create an Open ODS View on top of the third part database from which we have already established connection in BW. It will work in a similar manner as DB connect does. While creating an Open ODS we need to specify the respective source system and respective table/views from which the data needs to be displayed in it.

One thing to note here is that by the options mentioned above, we can completely by-pass PSA layer and can use Open ODS layer directly as our acquisition layer. Except for data Store Object option wherein we are using the old DSO’s instead of new Field Based DSO in Open ODS view,we can completely eliminate the need of PSA layer.So with Open ODS layer, SAP has gone one step forward and have eliminated the need of PSA layer from the EDW architecture. Also in Open  ODS we can create our own customize star schema by linking the objects in Open ODS with Objects in other Open ODS .

There are three types of Open ODS that can be created currently in BW 7.4.

As shown in the diagram, we can also create our own star schema using Open ODS by connecting the facts open ODS with the master data open ODS and text Open ODS.This will reduce the dependency on the Info cubes that we have currently and a whole new modelling flow with the goodness of both DSO and cube can be created using the open ODS, also it will reduce our effort to a single layer, Open ODS layer, and the existing acquisition layer and data mart layer will get completely merged and we will have only one layer left that is Open ODS layer in BW. So the maintenance of the data loads and data targets will get simplify greatly in BW 7.4 using Open ODS layer.

In its future releases of BW, SAP tend to enhance the concept of Open ODS and provide some additional features as well, so from BW 7.4 Open ODS will become the main entity in BW instead of current architecture involving Data Sources, DSO, Cubes that we have currently.

Thanks Jai for moving us to Bi 7.4 feature.

Very good blog.. Thanks for addressing some of our concerns.

nice one ,thank you for sharing.

Excellent.!, Thanks for sharing.

Thanks for sharing information,