Installation of SAP on RAC with Oracle ASM

I am writing this blog , as i faced issue on installing SAP system on oracle RAC with ASM.

When i raised a message with SAP , SAP told me to install SAP on  oracle and then migrate it to RAC with ASM.

So i want to add few points to make it easier for others. There are few importants points which we need to remember.

1. SWPM will give you four options to install SAP

i. Single Instance on Filesystem

3. We need to know about the scan listener name and port which it is using. By default it uses a port 1521.

4. Listener Configuration for each RAC Node.

I have to install the SAP on RAC with oracle ASM , in a distributed environment, so i installed the SCS first , which got completed successfully.

What option should we select in SWPM for RAC?

SWPM will give you four options for Database installation scenario.

i.  Single Instance on Filesystem (normal)

ii.  Single Instance on Oracle ASM(oracle is on ASM without RAC  )

iv. RAC on oracle ASM(RAC node will exists with ASM)

I have selected option RAC on oracle ASM as we are having RAC with ASM environment. 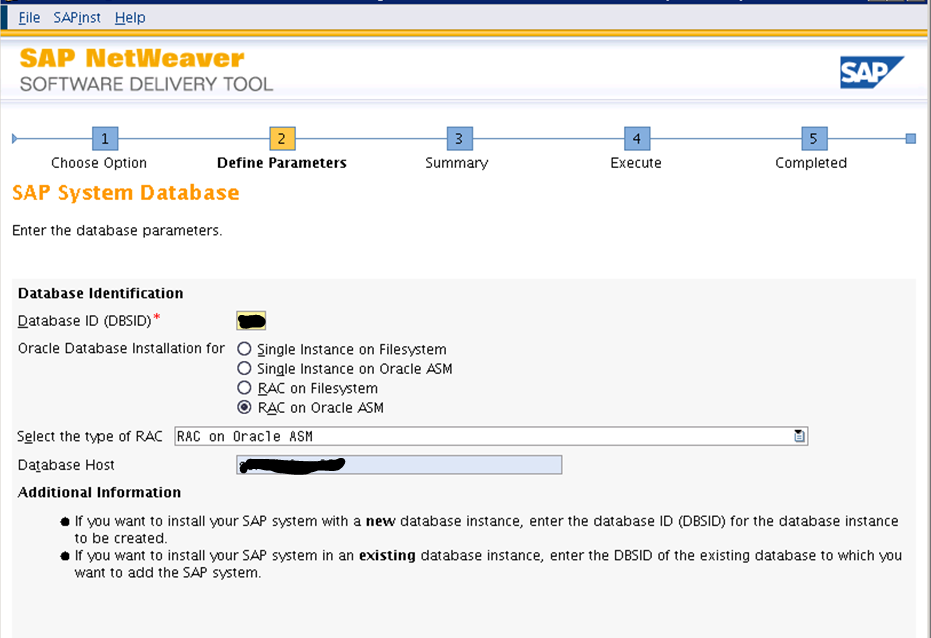 In the below diagram , where you need to provide the RAC Parameters

i. Database Name : You need to enter the Database name(DBSID) as per your requirement for example i have given DBSID as RAD.

iii. Length of Instance Number : i. One character

if we select the one character option , then DBSID(in our case which is RAD) followed by one character digit for each instance on RAC  node.

Since we have selected the option one character so here value of N will start from 1.

What we need to know about the SCAN Listener?

SWPM asked for scan listener name only but we need to input port number as well , which it didn’t asked for?

if you don’t specify the port number , it will give I/O network error and will not able to connect to Database.

When we run below command on the primary RAC node , we will be get the scan listener name.

The above command , will let us know which port is configured for the scan listener.

Here we need to enter the correct scan listener name which is configured on RAC environment as it will have it own scan listener.

Oracle RAC secure store connect* will be like this

jdbc:oracle:thin:@/scan1:1521/Service_name  since the Service_name is the DBSID which is RAD.

So the final string , will be

Listener Configuration for each RAC Node

In Spfile<SID>.ora , you need to add local listener for each RAC node with the port number which will be different from scan listener port number.

Now why we are configuring the local listener on each RAC node with a a different port number.

We are configuring the local listener so that we can take the backup for Database using a BR*TOOLS.

I will be writing a next blog on BRTOOLS in RAC environment.

Thanks for sharing this great article on installation of SAP on RAC. I was looking for information on this installation option for a longtime and there were exact info available till now.  Really appreciate for sharing.

I have one doubt do we need to start the SAPINST with user “ORACLE” or can we start with any admin user.

You need to start sapinst with root user!!

Thanks Ashutosh. Can we set manually the "cluster_database" parameter to true. Because the sapinst is taking it as "false" and also the comment says don't modify this parameter.

Thank you for sharing this valuable info

Will this method work? Would appreicate if you can share your experience on this?

Nice document, is there any document which provides end to end SAP installation document on Oracle11gr2 RAC with ASM including Grid infrastructure installation with ASM and Oracle software installation, those binaries will be provided by Oracle or SAP.

A step by step guide can be found here: http://goo.gl/wncNqN

Excellent post, It really helped me in my first installation on RAC

Please help me how to proceed.

Kindly share your email id , i will drop you a mail.

And also I have to install 4 applications on the RAC whcih contains two nodes.

When I check the scan listener name  in server , I can see LISTENER_SCAN1 in node one and LISTENER_SCAN2  in node 2 .

While installing applications which listener name should I give .

Can I use same listener name for all 4 applications .

I have dropped you a mail with the details

Could you please share some document on Installation and Configuration of SAP HA
ASCS/ERS Instances On Oracle 12 RAC on ASM , Mail ID : raju.basis@gmail.com.

We currently have  an environment in which the Oracle Database is setup and configured in a Oracle RAC environment and is working fine.  Our CI is configured in a Broken Red Hat Cluster.  We would like to Replace the CI with a new installation on SAP HA ASCS/ERS Instances On Oracle 12 RAC on ASM and connect it back to the existing database.  SAP has told me that I just need to install on Host A - PAS and Host B - AAS with ERS.  Do you know the steps I would take to do this and how I would configure it?  E-Mail is Marilyn.Daffron@yahoo.com

Do you have any documentation on upgrading SAP databases from 11gR2 to 12cR1 with RAC, ASM , and Multi-Tenant?