AGSA is following suit in a company-wide effort for a more efficient use of space. AGS currently can only seat 300 of its 550 (and growing) employees . Various space maximizing seating configurations will be implemented in the Newtown Square office in 2014.  This effort will not only maximize the number of people that can be comfortably accommodated, but will provide a new layout that will define the way teams can work and collaborate in the future.

One feature of the new layout is modular desks and nonpermanent structures that are able to be adjusted for shifting needs. This “flexible desk” configuration functions for both high density and low density use and contains accessories for electrification and cable hook-up. The new space will also feature alcoves for meetings or co-working, and is also mobile and able to be reconfigured when needed.

The 3000 section will feature a “Hut”, which is an arch-like structure with a roof and walls, designed for housing teams together and enhancing the collaborative workspace environment. It will feature large, open desk arrangements for teams to sit at and work as a group.  Other features of the hut include a whiteboard with pen holder, coat hooks, and a flipchart holder.

Another feature of the new layout is a “preconfigured room in room” consisting of acoustic sound proofed walls, designed for meetings and team work, in an undisturbed 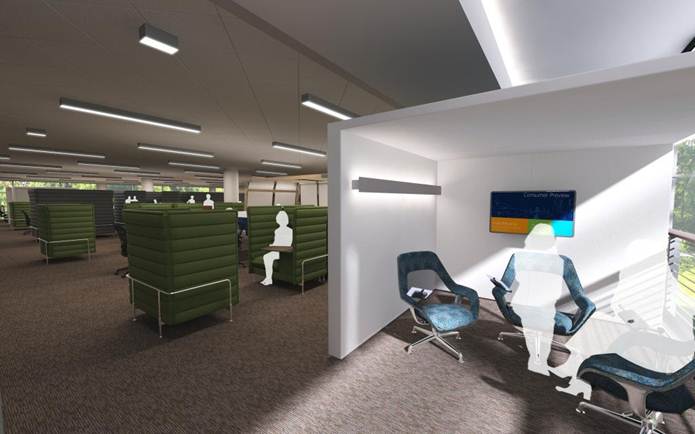 environment. These rooms also include connections for monitors and also functions as a media wall. The proposed setup introduces an innovative, collaborative work space concept and will redefine the future work environment of AGS. 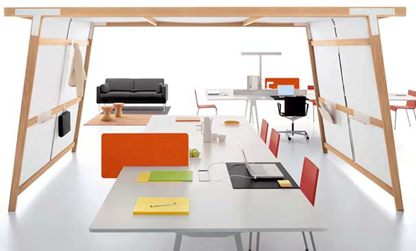