I was privileged third time in a row to get chance to attend the special design thinking (DT) event organized and conducted usually by Marilyn Pratt at TechEd Bangalore. She was not able to host it this time and Jeanne along with Lucky did a fantastic job conducting the event. The topic this time was something I keep reading in any book related to leadership – Failures and why owning failure is a good thing. Marilyn has already written a blog related to the theme here.

The event in this blog is described in the way I perceived it as an attendee and a panelist. Any questions related to the event could be asked from Marilyn, Jeanne, and Lucky or even in the form of a comment in this blog.

Flow of the event:

There was a very good participation in the event from TechEd attendees. Participants were asked to club themselves with fellow attendees in groups following DT principles (sit with people who look different than you). I remember Vijay saying that he was sitting with right people while sitting in between me and Jansi for a short while 🙂 . Panel members were seated facing the participants. 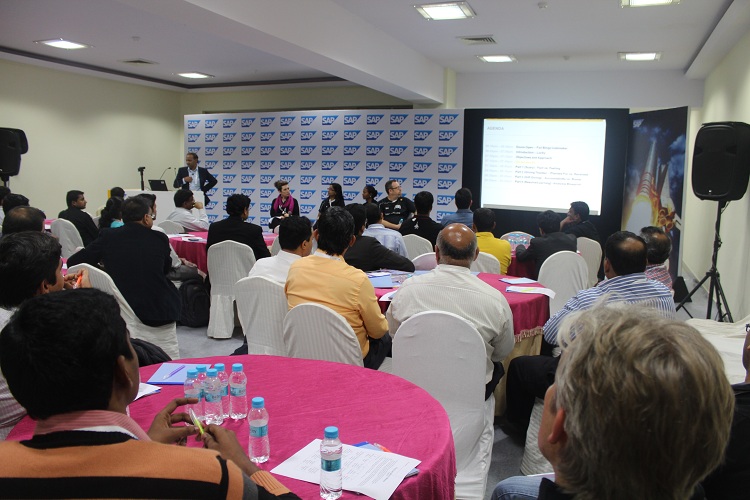 Jeanne had some very thoughtful scenarios with her to be discussed with the Panel members and then the same being made open to the participants.

The first scenario was to discuss one’s failures and reaction to it. Well, it was not very easy for me to share my failures and reaction to them spontaneously. Panel members talked about some very critical situations but I would not be able to share them here. Rather I would share the failure I encountered recently. When I was asked to share a failure, I had quite a list of them but I preferred to restrict to professional failures and that too in descending order. So here goes my most recent failure – I failed to submit an entry into demojam for TechEd Bangalore this year. There was a good coordination within the team, things worked well but still we failed. Testimony to the trial would be this blog which I had written while in the process of achieving it. Though the team could not present the case at demojam, the same is a very competent entry for another similar event taking place within the organization. So, I am going by the saying, all is well that ends well. The idea could be used elsewhere and that gives me the feeling that it was not a complete failure. So, my reaction to the failure was, though we failed at one event, we could present it at another event. I am purposely trying to avoid saying ‘we could use the same and be successful at another event’. That’s one of the learning’s from FAILfaire event. By this time, I had also heard failure turned inspirational stories from fellow panelists Yariv and Jansi and realized that the threshold energy of their endurance is much higher than mine.

There were stories shared from participants too. Though the stories were to share a failure, I could not hear a single story of absolute failure. They all turned out to be inspirational stories. These stories were real time and spoken by the characters themselves in physical world unlike the stories I read in different inspirational books. It was simply thrilling to be there at that time.

Lucky did a great job engaging with the participants and made us think by asking different questions from the experiences shared. Being in the panel, I could so very clearly see that FAILfaire thoroughly engrossed the participants in discussions. 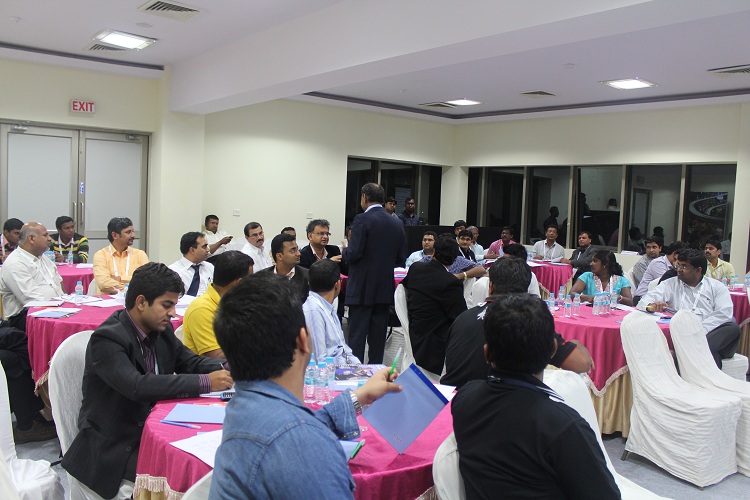 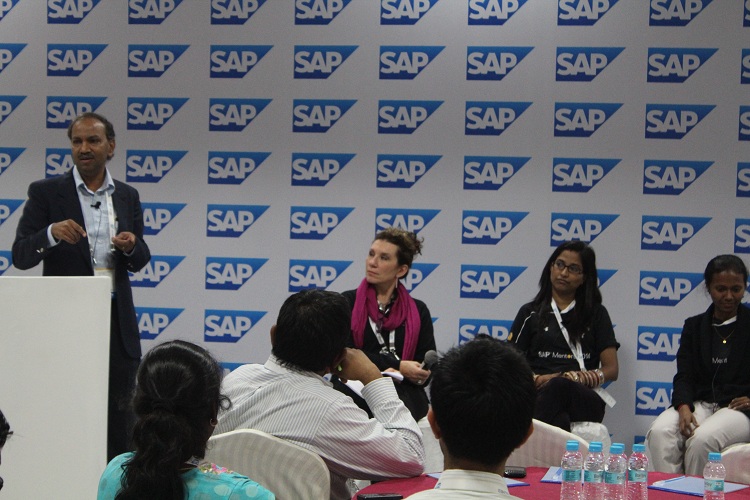 I should mention that even the term FAILfaire used this time for the DT event has quite a good story behind and I am sure community would be happy to hear that from Marilyn Pratt.

The next question by Jeanne exposed the emotional side of my personality and I am surprised at my own reaction. The question was if there has been a gift given to us which we did not like. Every answer I heard to this question including me had one thing in common – the gift may not have seemed to be a pleasant one at the first impression, in long term all of them became the reason for a great beginning! It was becoming increasingly difficult to accept that we were discussing failures because there was no story that ended as a failure rather gave way for a fresh beginning.

The event kept the participants very well engaged till the end. 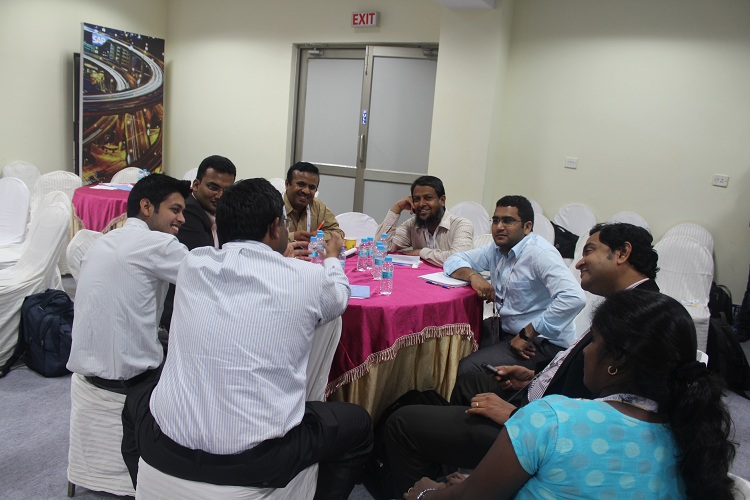 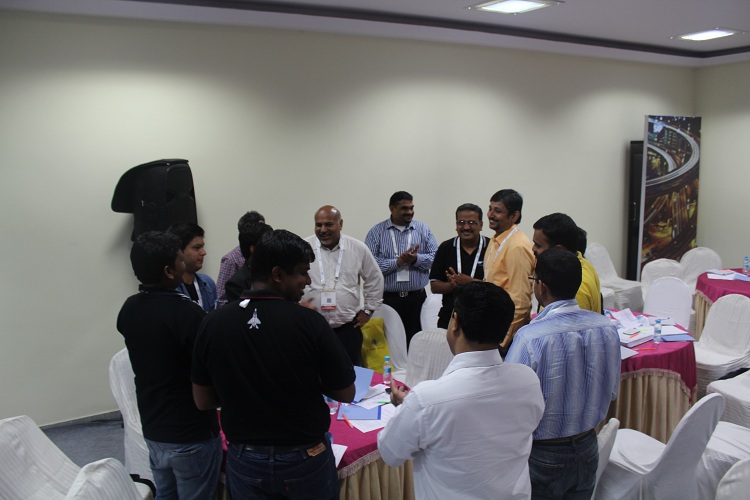 The next question from Jeanne was regarding blame vs. accountability in case of failures. Well, there were some exceptional and bold stories from the participants on this. They highlighted that blame would be too easy while accountability and coaching would need the person and the partner to go much beyond the boundary. I can’t resist adding my practical experience here. In our work lives, it is extremely hard to remember a situation where things did not work as expected and blame game was not played. Even the next steps usually gets decided after the blame game is over. However, there are exceptional audacious scenarios and few got discussed there at the event. Lucky also added his comments there that following an unconventional and not-so-easy route make the person innovative and I couldn’t agree more with him.

The next and probably the last question (assuming I have not forgotten anything) from Jeanne was what do we do once we know we have failed. Well, I do write a blog in my personal blogosphere analyzing the possible reasons of failure. At this stage, I am very thankful to Yariv who added a very new dimension to my thought process. While I was talking about analyzing the causes of failure, I should not forget the good things happened in the process of achieving something. E.g I might have failed to submit an entry in demojam but there were few things that had happened very well like deciding the area, getting to know people who could tell us more about the area and likewise. Yariv suggested that there is no bottom line and even in case of failures, the different stages need to be remembered and good ones should be reapplied. To me it highlighted, learning from the experienced.

The topic selected for DT event this time was outstanding to me. It was great to hear so many failure turned inspirational stories. I could also see that this topic attracted many people with a very high level of experience, making the event more inclusive. This also provided many people like me to learn from their experiences. The whole event was very interactive and engaging to me. It was great to meet new people and also see few familiar SCNers Jitendra Kumar Mayuresh xMoshe Naveh (Old Acct). Thanks to Moshe for sharing all the pictures that are used in this blog. I am back from the event with a very fresh perspective that it is hard to fail because it is something nobody wants to have and hence usually averts it. Failures make a person stronger and more creative. But at the same time it depends on the person as to how she wants to handle failures.

Yariv played ‘Failing bingo’ with me and he proudly won and I lost with the comments that I am yet to commit many of the mistakes. A book was suggested by Yariv and I suppose it to be Start-up Nation subject to his verification. We have to be thankful to DT team at SAP for providing us with such wonderful opportunities.

Good Job Kumud !!! Now I could remember everything happened during the FAILFAIRE event while reading this blog.

It was really good learning from others when they shared their stories.

Thanks for such a great write-up.  I am finding that even two months after attending the #failfaire event at #saptechedlv the messages I learned there are still resonating with me.    I guess that is what marks a great event!
Sue

I couldn't attend the event as all seats were already booked 🙁

Thanks for putting it all together. It was a great event, and good learning for me 🙂

I agree its not easy to fail - but its wiser to accept the failure, learn from it and move ahead.

Big thanks to Jeanne for pulling up the event in the absence of Marilyn Pratt.

It was great meeting you, Jeanne, Jitendra, Moshe Naveh. and all the participants.

Moshe Naveh can you please mail all the pics.

Great blog Kumud! Thanks for sharing the event with us 🙂

I totally agree with the sentence "Failures make a person stronger and more creative". Sometimes it takes a while for the person who failed to realize that. Events like this one help us to be more prepared to learn with our failures.

Have a great new year!

Thank you all for the comments. The failfaire event turned out to be a very thought provoking event. The stories shared are still fresh in my mind and actually help me to be strong at required moments.