City Year is making a difference in the lives of thousands of school kids across the United States. Founded in 1988, this nonprofit organization is dedicated to keeping students in school and on track to graduation. 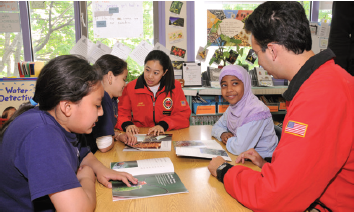 This year alone, City Year will partner with public schools to support around 150,000 students in 25 U.S. cities. It provides one-on-one and group tutoring that improves literacy and math skills and helps promote a positive school experience.

City Year’s mission is still growing. “Our goal in the next ten years is to move into many more cities where we seek to serve up to 900,000 students,” says Welles Hatch, Senior Vice President and Chief Information Officer at City Year.

“Give a Year. Change the World”

The City Year model is a great example of social responsibility in action.

The organization’s current corps members include 2,700 young people between the ages of 17 and 24 who commit to a ten-month term of service. These volunteers devote their time, talent, and passion to supporting students and their communities.

City Year not only benefits from the idealism of its corps members, but from proactive corporate citizenship as well.

In a webinar held last month, Hatch described how City Year is beginning to use analytics solutions donated by SAP to gain better control over its data. This software was made available through SAP’s Corporate Social Responsibility (CSR) program.

Getting the most from your data is huge for any growing organization. City Year deals with two large data realms: operational data – such as human capital management and finance – and student performance data. The student data is of particular importance. Analyzing this information more fully can help City Year better assess the impact of its initiatives on a student’s ability to do well in school.

The webinar was hosted by TechSoup. This nonprofit company helps other nonprofits, libraries, and social benefit organizations around the world get the technology and resources they need to operate at their full potential. SAP CSR partners with TechSoup to offer several analytics solutions free of charge to nonprofits: specifically SAP Lumira, SAP Crystal Reports, and SAP Crystal Dashboard Design software.

Moving forward, City Year expects use the donated software to gain a clearer view of its operations and outcomes. “We’ve just started our journey, but we can see what’s possible,” says Hatch. “And we’re not as far away from our business intelligence goals as we thought.”

In fact, City Year got a very good idea of the potential of the SAP software at the 2013 ASUG SAP BusinessObjects User Conference in Anaheim, California. City Year was used as a test case for the friendly competition known as the Developer Wars. Four teams competed to come up with a creative approach to City Year’s data challenges using SAP analytics software – and did it all in under 24 hours.

Fueled by pizza and soft drinks, the winning team from Sparta Consulting transformed City Year’s static data into an interactive dashboard that Hatch called “an eye-opening, knock-your-socks-off view” of the business.

So congratulations to Sparta Consulting and City Year!

But there are really lots of winners associated with this story – Not the least of which are the thousands and thousands of students who are performing better in school because of people and companies willing to put their idealism to work.

You can learn more about the SAP donation program at TechSoup by visiting this website.