Founded in 1998, Rapid Realty ranks among the first real estate companies to employ a franchise model and already has 50 offices throughout New York City. The founder, Anthony Lolli, decided to get a tattoo of the logo, and was so inspired by it he encouraged his 800 employees to do the same. Getting inked will mean a 15% commission increase. So far, 40 employees have put their skin in the game.

The logo itself departs from other realty logos with their images of houses, for sale signs, and picket fences. It is undeniably modern, an arrangement of two upper-case Rs. The letter forms are reminiscent of the former technology powerhouse TRW in the 1983 iteration of their logo. What was once cutting edge design for a technology company now finds its way into a realty franchise 15 years later. But something gets lost in the translation. The letterforms are joined in an awkward fashion. Their legs are distorted in a crude manner which contradicts the simplicity of the TRW R. And the result lacks simplicity and elegance. The letters are forced into a position into which they do not naturally flow. They grow feet, and not shapely ones at that. In another instance, an arm and hand grow out of it to perform a proper handshake with another organization. 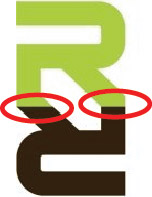 And now, employees, under financial incentive, are branding their own bodies with this logo. Yes, these are tough economic times and a lot of people feel the pinch. And yes, I suppose laser removal is always a possibility. It is conceivable that some employees do indeed feel a strong sense of loyalty to Rapid Realty, but it is questionable how many employees would brand themselves with their company logo without incentive. The story about the tattoos was a media success and received significant local and national coverage online and on TV. Anyone who has seen the story will now recognize that logo. I don’t know what it has cost Lolli in commissions since his employees started getting the tattoos, but I’m sure the ROI was significant.

Of course, the most famous example of a tribe so loyal to its brand that they used a company logo on their skin is Harley-Davidson owners of years past. And, admit it, the Harley-Davidson logo is a classic. The difference is that it was a spontaneous and authentic gesture among bikers. It was a true expression of loyalty and belonging to a brotherhood. Harley-Davidson offered no incentive although in time they did recognize the tribute. And these were the same bikers who later wore the logo upside down on their leather jackets as a sign of protest when Harley went more mass market, became what was perceived as a “poser” bike and betrayed the hardcore crowd that supported the brand for so many years.

It’s very hard to imagine a realty franchise garnering the passion for their brand that Harley riders had, and I suppose Anthony Lolli realized this too. That’s why he felt he had to pay his employees to represent his brand on their bodies.