SAP TechEd 2013 – applications based on ABAP and SAP HANA, part 2

In my last blog I wrote about ‘bottom-up’ and ‘top-down’ approaches to leverage SAP HANA capabilities from ABAP. In this blog I want to give you a glimpse on new features planned for the next support package of ABAP 7.4.

As you probably know Open SQL is our database independent interface to connect the ABAP application server to the underlying database. The big advantage is that code making use of Open SQL runs on all database platforms supported by SAP NetWeaver AS ABAP.

The big disadvantage is that the feature set of Open SQL is quite restricted. Take a look at the following examples:

Is there really no better way? In the future there will be! 🙂

We plan to enrich the feature set of Open SQL. This will allow you to push down calculations to the database layer that could not be pushed down by means of Open SQL in the past. With the next support package of ABAP 7.4 we, for example, plan to support:

The following example shows how advanced Open SQL can look like:

END AS price_vat, “projection list needs to be separated by comma

INTO CORRESPONDING FIELDS OF @ls_result. “variables have to be escaped by @

What I have written about Open SQL is basically also true for the view building capabilities of the ABAP Dictionary. In line with Advanced Open SQL we also plan to introduce features for advanced view building. These features will ease code pushdown and simplify the consumption of relational data models.

In the future we plan to allow you to create views by means of a new Eclipse-based editor (integrated into the Eclipse-based ABAP development environment). The following screenshot shows how this editor will look like. 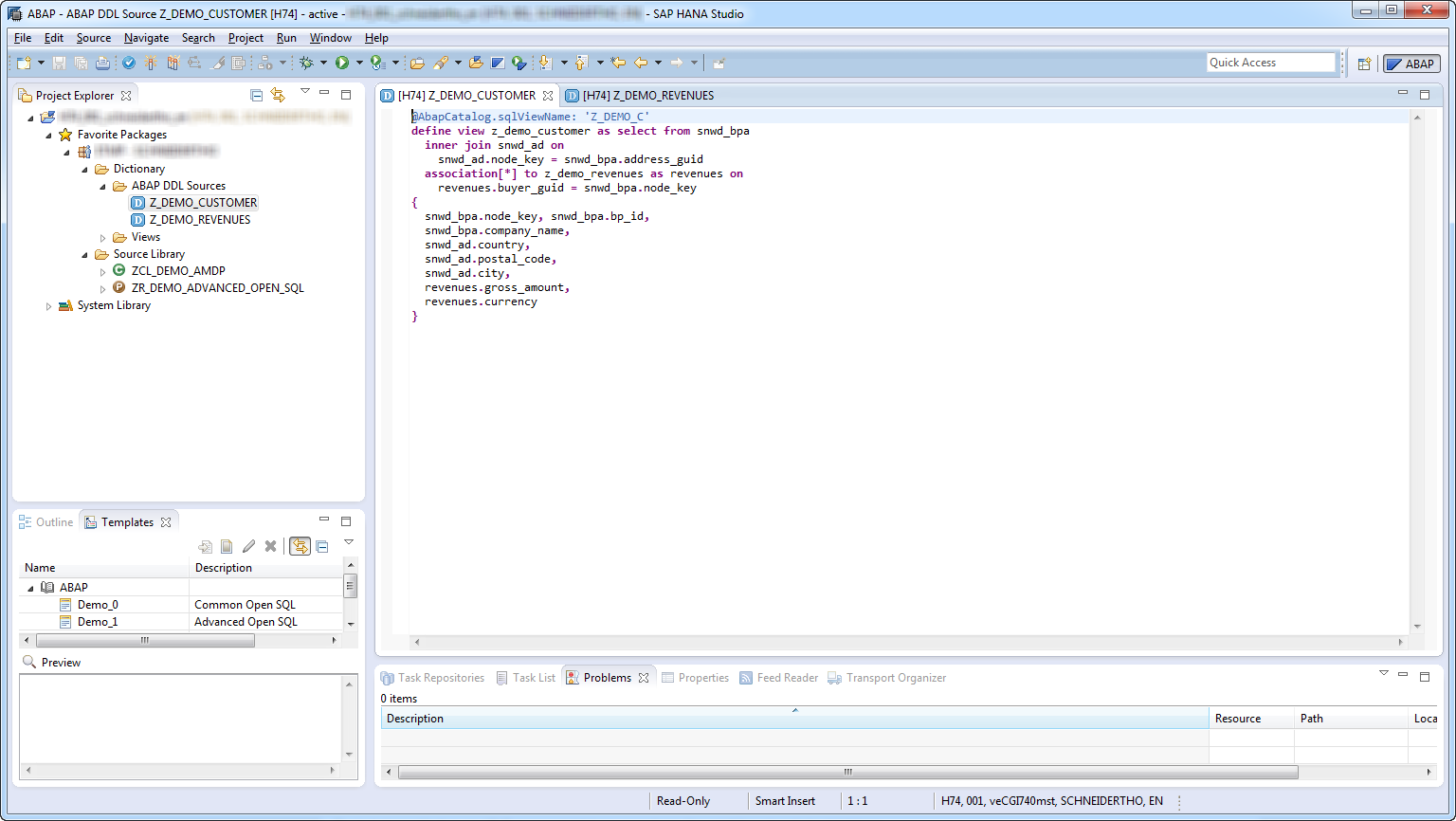 And the following two snippets illustrate how you will define views in the new editor. Views can be nested (i.e. a view consumes another view) and they can be linked with associations.

association[*] to z_demo_revenues as revenues on

The following example shows how ABAP methods can be used as container for database procedures (you might notice that the code inside the method body is not ABAP, but SQLScript).

Now you know which new features are planned to ease code pushdown and to simplify consumption of relational data models.

The remaining question for my last blog will be: how can optimized infrastructure components help you to benefit from SAP HANA. If you like to learn about fuzzy-enabled value helps or evaluation of business rules in SAP HANA, you will soon be able to read more… but most likely only after Christmas 😎 .

A very good read and very informative too. I attended the sessions for tuning custom code for migration to HANA. I was actually looking for deeper details which I now have from your blog.

thanks for the feedback. Best regards

Hi Thorsten - Amazing stuff are coming out for ABAP Community 🙂 Thanks for sharing this info with us. Looking forward to it...

Also i have a question in my mind for which i didnt get convincing answer for quite sometime. Appreciate if you can clarify...

thanks for your feedback. I am not sure, if I can add much to what Eric has written in http://scn.sap.com/thread/3459978.

As Eric has outlined during the discussion, you can very well combine ABAP or Java and SAP HANA. You are not limited to using JavaScript. And openess is not (only) a question of the number of programming languages SAP HANA supports 'out of the box', but of interfaces that can be used from other environments, e.g. JDBC, ODBC...

You are right that this requires in contrast to using XS an 'external' application server, which currently runs on a separate host. While that means that the architecture is not as simple as with XS and that certain optimizations might not be possible, I still consider it a very valid approach (especially if an application you build is supposed to run tightly integrated into let's say ERP and relies on re-use of existing ABAP-based frameworks).

What your question teaches me is that we probably have to spend some more time next year to define what 'native' really means and how it is different from 'SAP HANA based' as well as what are guidelines to decide on the architecture of an application.

Hi Thorsten - Thanks for the response. Eric has clarified some of my questions and i very much appreciate that...i have posted my question in this blog for which i didnt get the detailed answer...Appreciate if you can clarify this in this forum or through a separate blog.... I have rephrased my question  below...

"Why can't ABAP AS / JAVA AS be brought within HANA itself (2 tier architecture) and provide multiple native application development options in addition to Javascript / RDL which exists today?"

can you give a bit more detail on the reason for using association[*] to to mark the connection to another view. Why not use the join construct do so?

Also it seems that in your examples the names of the views in the ABAP dictionary and in HANA are different (Z_DEMO_R and z_demo_revenues), isn't that going to be confusing?

Hi Albrecht,
let me give you the standard, non-convincing answer: that depends on the use case 🙂 .

And in stating this, my explanation below will be an example, rather than a general information:

In principle you could use a JOIN statement but an ASSOCIATION e.g. allows for a simplification of your data model. Assume you define a view  Vbased on a join between tables A and B with a "complicated" or let's just say advanced ON condition. You can then use fields of A and B in the field list. The definition of the association ASSOC moreover allows you to expose the association itself by including it in the field list. Up to now you might argue, what's the advantage of this? And that is, when you think about path expressions, respectively when building another view V2 on the initial view V. Having exposed the association, you can follow the association e.g. you can include an element ASSOC.field in your view V2. Instead of rewriging the complicated ON or WHERE condition again, you just use the path expression.

Concerning your second question. There are 3 completely independent names in the game. The first one is the name of the DDL source. Within this DDL source you define the CDS view named Z_DEMO_REVENUES (in the above example). The naming is not restricted to the "16 characters" as is the case for ABAP dictionary views (created in SE11). In addition to the CDS view you must maintain the annotation @AbapCatalog.sqlViewName, which is the name of the SQL view on the database. Since the CDS view name and the SQL name share the same global namespace they both have to be unique.

Maybe one remark: The CDS view name Z_DEMO_REVENUES is the "name of interest", since it should be used e.g. in OpenSQL queries, in other CDS views based on the vie Z_DEMO_REVENUES, etc.

thanks for your detailed response, let me try to rephrase it in my own words.

Can I create association only with views or also with regular tables (column and row tables)?

Also this video in the HANA academy Development Perspective: Enhancements in CDS/HD... | SAP HANA makes it a bit more clear.