Two videos appeared recently, each a design manifesto for two competing technology giants; Apple and Google. Each espouses perhaps and end to modernist design with its call for simplicity, cleanliness, and minimalism. This is not to say these values are no longer applicable to contemporary design, they’ve just been subsumed under a higher category, a higher goal, a higher calling.

Apple debuted its video at its World Wide Developer Conference where the show was stolen by new product development announcements and most importantly the new iOS7 with its turn from skeuomorphism into a flatter, cleaner look. The video appeared first in the agenda, as the lights went down, the cheers rose and the electricity was palpable. And rather than start off with a bang, as a band would do at a concert, Apple started with a whisper, a touchy-feely moment.

The video is called Intention and, at only a minute and a half, is a very high level intimate view into their new design philosophy. It asks:

“What do we want people to feel? Delight. Surprise. Love. Connection.” We probably all believe that design can exist primarily for human use, but this statement is something else altogether. It makes human use sound a bit dirty; merely utilitarian. No, Design exists to evoke particular emotions; delight, surprise, love and connection. These four categories are the first step in a design brief; these are what the outcome is measured against. This is emotion-based design. It does not start off as utilitarian; it is not grounded in aesthetics.

The video is meant to be emotive and inspiring, and it is. It’s also beautiful. In its first 10 days on YouTube, it has been viewed 446,995 times.

A month prior to Apple’s WWDC, Google held its own event; Google I/O. One of its sessions was titled Enchant, Simplify, Amaze: Android’s Design Principles. Clocking in at 45 minutes, it is longer than Apple’s TV commercial length declaration, but delivered in a TED style format, and learning from Steve Jobs’ presentation skills, it is well worth every minute, although the schmaltzy, if not girly, imagery teeming with happy children and cats does get in the way.

But, rather than present it as their vision, it is phrased in the first person; it is presented as the vision users have for Android. The vision itself is phrased from a user perspective and based on significant research. This vision has yielded 17 design principles.

Android performed a yearlong baseline study, following daily diaries of users, making in-home visits and interviews paying close attention to users emotional responses. They consulted various bodies of psychological research, which focused on marriage, work group research as well as studies into emotion. They discovered a Magic Ratio of positive to negative emotions that predict the long-term viability of a marriage, successful work groups, and a general sense of emotional well being. It was learned that every negative emotion needs to be offset by at least three positive emotions in order for a relationship to succeed, and they applied this ratio to their design principles. 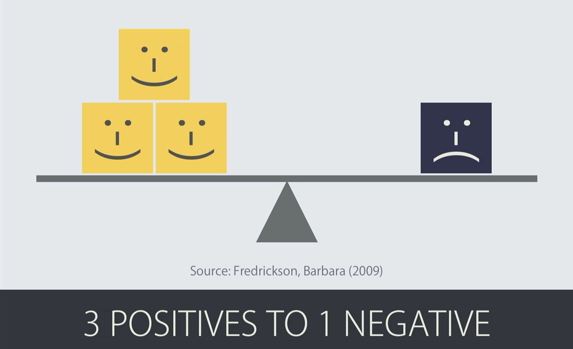 Of course, the goal of Android design is to eliminate all possible negative emotional reactions. But simply balancing out a negative with a positive does not work. We are all familiar with the principle of an eye for an eye and tit-for-tat. We believe there is whereby you can correct a misdeed with a good one. Christianity is even more liberal; you can correct a lifetime of evil deeds with the singular act of accepting Christ as your savior.

But interface design is different. According to Google, you would need at least three positive reactions to simply counter one negative. Each of the design principles listed above would count as one positive emotional reaction, and to supply a delightful user experience, any flaw would need 3 positive experience to just break even, that is, evoke a neutral response. You need 4 or more to get into the positive zone,a very high bar.

Now, no developer/designer seeks to provide their audience with a miserable experience. Everyone heralds his or her designs as clean, modern and easy to use. Everyone claims delight as his or her territory. Making such claims is easy, delivering on them is another story, and Google doesn’t just make the claim, but backs it up with strictly defined guiding principles that can be used as an assessment tool. This is a very comprehensive system that merits the attention of any user interface designer. More importantly, it signifies a shift in design thinking altogether. Emotion-based design is a new category of thinking about design.