OpenUI5 or AngularJS? How about both?

SAPUI5 has just been open sourced as OpenUI5 and provides a lot of features.  AngularJS is a great javascript library that can also add a lot of power to your application.

Let’s compare some of the features of the two frameworks.  Here’s two input fields beside some text. They both look similar.

Let’s look a bit behind the scenes at how to code them. First in UI5 based on the OpenUI5 sap sdk example: 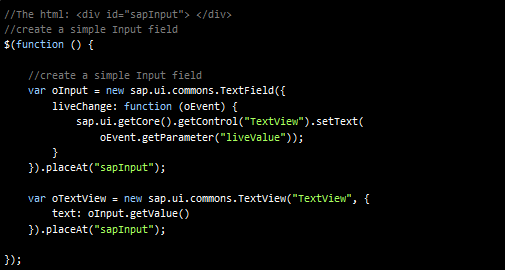 Something similar in Angular can be done directly in the html:

There are similar templating options in OpenUI5 so we can do something almost the same without livebinding by using handlebars:

Along with just a bit of model binding in javascript (see the live examples).

Imagine we could type the following:

to produce an OpenUI5 datepicker and then just use the curly braces to show the information somewhere else: Angular can help us do this with its concept of directives. Directives are a way to extend html new tricks and is also how we can use Angular models to bind data. Once we have the directive we can re-use it very easily in our html.

First is the Angular controller. In the controller the model is plain old javascript:

Then we create an Angular directive and initialize the datepicker. The main steps are: 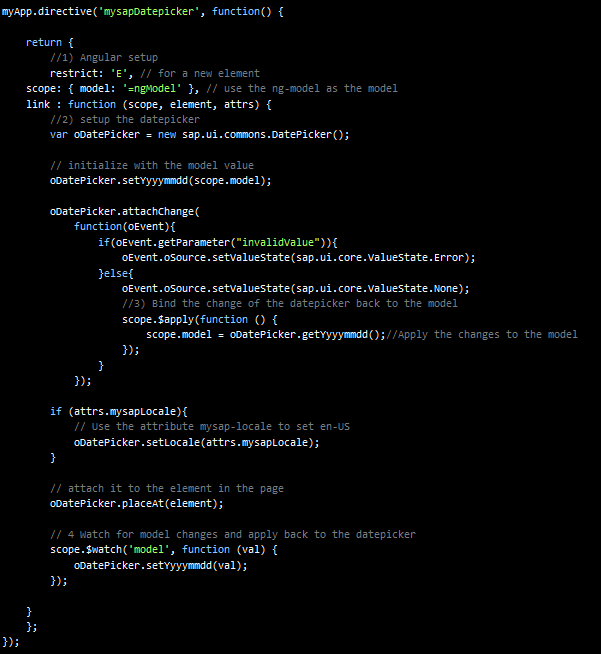 All that’s left is to add the datepicker to our html. We’ve even added a custom attribute to set the locale as shown for the start date.

This will give us:

Checkout the live example on jsbin. In the jsbin example I’ve also added a filter to format the date. Be sure to open in Chrome or Firefox since the cdn version of OpenUI5 doesn’t work well with IE.

While there is a bit of code for the setup of the control and the directive, we gain some nice things:

I hope this shows some ways that Angular can be used along with OpenUI5. Now you don’t have to choose between the two, you can use both!