After the groundbreaking ceremony of the SAP Labs Latin America in Sao Leopoldo, Brazil last year, the Marketing and Communications Team SAP Brazil worked very hard for the Grand Opening of the new building on December 2, and 3, 2013.

The big day finally arrived and all hard work including endless night and week-end shifts was to the test. After the press and media conference in the morning, the opening ceremony itself started at noon.

Stefan Wagner, Managing Director of the SAP Labs Latin America, welcomed the guests and spoke about the great strategic role for SAP this location would play worldwide. He said that he was very proud and honored to work at this inspiring place with such a dedicated and passionate team. He and the SAP Labs Leadership team defined four principles on how to run their business:

Diego Dzodan, President of SAP Southern Latin America, then gave an overview of the Brazil and Latin America strategy for SAP and talked about how SAP HANA can help companies in Brazil improve their productivity.

Luka Mucic, Member of the Global Managing Board of SAP AG, presented SAP’s global strategy and investments and said he was glad to be back, as he really enjoys travelling to Brazil. He also thanked everybody who had been working so hard. 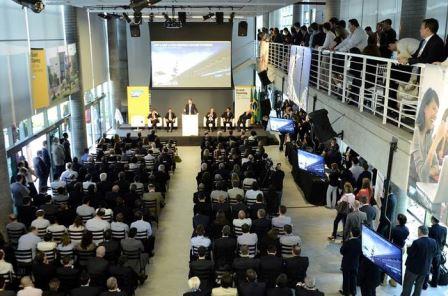 The grand opening ceremony was a great success with very positive feedback from the audience. It took place at the new cafeteria and event area.

Bringing lots of events and people together

As part of the two-day grand opening ceremony, many national and international guests were invited to attend various other events in the afternoon of December 2, and 3: the SAP Co-Innovation Forum, the SAP Localization Summit, the SAP Academic Forum and the SAP Business One Forum. Coordinating and planning all these events, agendas and locations was not easy to do from Walldorf, but seeing the location, the rooms and the people, we knew: it made perfect sense. It offered a unique possibility to combine the celebration of the new facilities with in-depth discussions between SAP colleagues and executives from the Labs and other locations, government and university representatives, as well as the press and media.

The Grand Opening and the other events were a huge success: With 1.090 registrations in total, five top accounts from Latin America, six CEOs, as well as 294 customer employees, 130 partners, and 50 academics took part. This resulted in more than 35 press articles. Well done!

Have a look at My Brazil experience (Part 1) and the SAP Labs Latin America virtual tour!