To change the pace a bit from my earlier posts on TechEd BLR 2013, I’m going to intermix the text with the imagery.  With no keynotes today (hip hip, …), there was a full plate of sessions and other activities to choose from. The images are (I think) in chronological order, so you can see it wasn’t just one lecture after another.  I’ve divided sections arbitratily as “pix 1”, “pix 2”, etc. While this post is titled “Day 2”, I start with Day 1 evening events that occurred after I posted yesterday’s notes.

On reaching the KTPO Trade Center (ah, sorry, “Centre“), we were greeted by Mentor-In-Chief Mark Finnern doing a Godfather get-up, Bollywood style.  I missed that party. 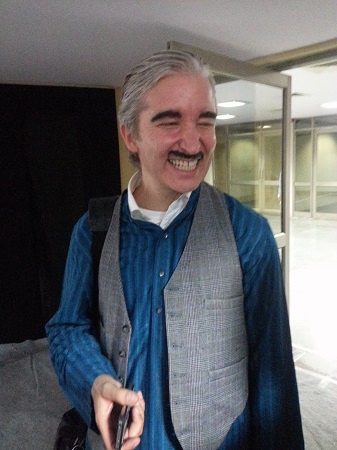 As Jelena asked for “best swag pix”, here’s one nomination, only available at the SAP store (for the low price of 700 R!), so perhaps not in the swag category.  Good for the world traveler concerned about getting to the airline ticket counter under the weight limits.  Not the multi-blade knife — the digital scale underneath!

To refer back to a thread in my post yesterday on Project Ganges and the challenges in improving automation in the Indian retail sector, the SAP Store – at TechEd itself – is using multi-part handwritten carbon transaction receipts for customer sales.  In the SAP Mentor meeting with Sethu Meenakshisundaram, we talked about this in a brief (NDA) encounter.  I’ll “do the needful” and wait for clearance to go into further details (cc @ finnern).

Slightly delayed (OK, an hour later than advertised ;-), the main attraction of the Wednesday evening event, Akriti Kakar, with dance troupe in full swing.  I mean no disrespect to the adoring cricket fans of Sourav Ganguly, but sorry, I’ll take pop music and a good beat (that you can dance to) almost every time. Unless I’m still blogging, of course. 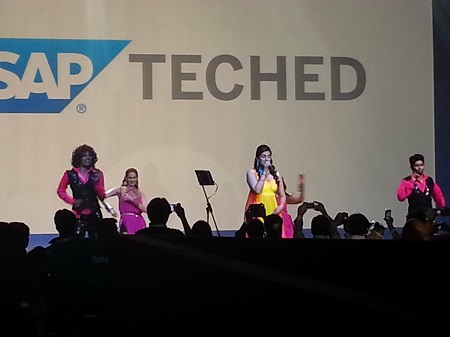 Yes, here’s that swag. Takes 2 batteries, and has a pleasant blue glow.  Seems accurate; we’ll see when we get to the weigh-in. 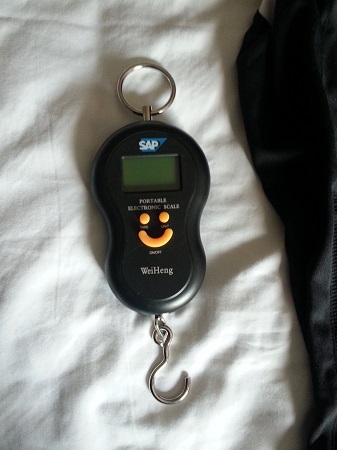 One of my small pleasures in life is amusing the hospitality crew in bringing my own reusable (Sierra) cup to the counter. 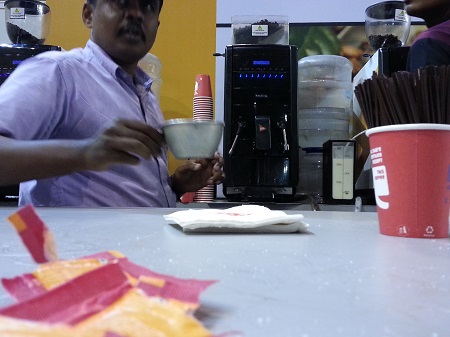 En route to the first demo station of the conference day, I took this shot of the “TechEd Live” media crew front line. “And,… Action!” My first demo stop was the “TwoGo” pod.  As this is a “ride share” app, the algorithms and interfaces are well trod territory. Whether this approach can succeed is problematic – by some undocumented fiat, the backend is HANA and the frontends are web pages and mobile devices. What I was interested in was (1) how to incent users, and (2) how it interfaces with other systems.  This appears to be targeted to large corporate accounts (and not a general public use audience), which would make sense in the SAP enterprise world (account rep: “and we’ll throw in a free green sustainable tool for next to nothing”).  I think the incentives were implicit than explicit – a company could set up reserved parking places for car poolers, etc, rather than implicit (discounts on stock or cafeteria purchases for loyal users).

A nice touch was Outlook integration, so ride “meet-ups” would be arranged as corporate calendar events, though with some anonymization (you don’t get all personal details such as home address if so configured), and one could respond to a driver/passenger connection as easily as “accept”.  What’s shown below is the mobile app, which has built-in function templates such as “I’ll be 10 minutes late”.  What seemed to be missing was easy connection to third party GPS/location services; I would expect to see a meeting place on the “location” field in the invite, which I could use on my Android phone to get there easier.  It’s got a Nokia connection that I know nothing else about. It does not (yet) interface to mass transit data systems (hint, hint: the bus we’re heading for is 30 minutes late, so no need to drive like a maniac to meet it).

On a side note, during our vacation in India, we met a Dutch woman who had spent 2 years in Bangalore trying to get a start up going in collaboration with Tom Tom. According to her, the owners of the base maps (which I assume are Indian government entities) would not cooperate adequately.  I can only speculate whether that was due to insufficient profit sharing, or glacial response time.  Coincidentally, during an SAP Mentor dinner where I spoke to Chip Rodgers about traffic in Bangalore, he was fascinated by Google’s ability to display real time traffic conditions here (given the above, quite a feat).  I’ve surmised this is a success story for Big Data, as minions of Android users supply real time locational data for the giant number crunchers to spin into red-yellow-green speed throughput heat maps. 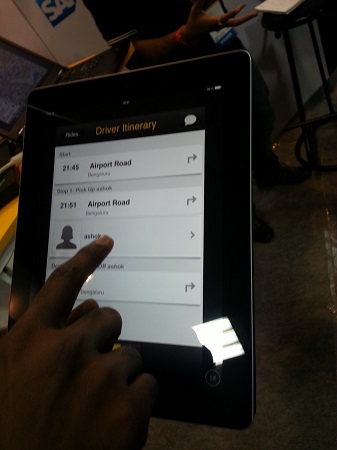 Sethu M getting the SAP Mentor jersey latest edition (this time, made by SAP customer UnderArmour, based in my home town – small world indeed!)

All eyes on Sethu, except Mrinal, who was appointed official note-taker! There was no mention of HANA that I heard during the entire session, which is refreshing, and important, because not every SAP customer has bought (into) HANA, and even those that have adopted the new technology will still have many other systems that need care and feeding for years to come.  The thrust of this session was to describe improvements and advances in detecting and reporting security issues (e.g., “No kernel older than 6 months on all systems”).  One phrase that stuck out was “Stay clean / get clean / security alerts”.  Well said.

I’m hoping we can get this topic into an ASUG session for the next annual conference (hello Gretchen!), or failing that, a webcast.  As the lecture material spanned a full hour with no time for interaction, I’d suggest cutting out much of the Early Watch and Solution Manager details and focus on what operators and their managers need to know at a higher level – not that the screens exist, but how much of this overlaps classic reports like who has SAP*ALL or default password, and what new features are leveraged in this approach.  The expert guided procedures are often worth their weight in gold.

A name I “screen scraped” from the slides: Fritz Bauspiess of SAP Security…

Also NDA, but I’ll share an aside that Somnath brought up in our dive into SCN (hello Julius, meet Maggie..): The Advanced Note Search Tool – like SNOTE, but better. That’s a take-home for me.  A blog link for reference: Automated Note Search and Customer Code Detection

How can I do a TechEd event without bringing the spork to good use! 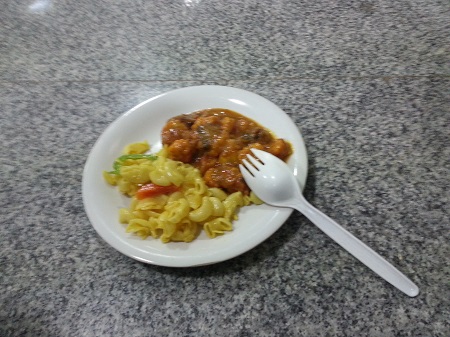 All right, this technology is pretty scary, and I’m not (just) talking about the picture of Joe Consumer in the image below. As above, it’s got to have HANA, it’s got to have a cool UI, and it’s got to have something else.  The paradigm here is the “shopper rewards” cards where you get an ID which gives you discounts on certain store items. In return, the store’s computers get access to your complete buying patterns, including when you buy medicines, how often you purchase deodorants, and how much chocolate you consume per annum (Abesh: “Chocolate”). But the additional wrinkle is that in order to supply you with better decisions (read: push specific products), consumers would somehow supply personal medical histories, such as cholesterol test results, to a big data base, that would allegedly help you get conforming substances.

That was my initial impression, but as I had no time before my next appointment to explore this topic in greater depth, I have the presenter’s card, and will go at this another time.  My suspicion is a large electronic and media company would be a place where this might be deployed, but as there SAP back-end is rarely acknowledged publicly, you may never know about it. 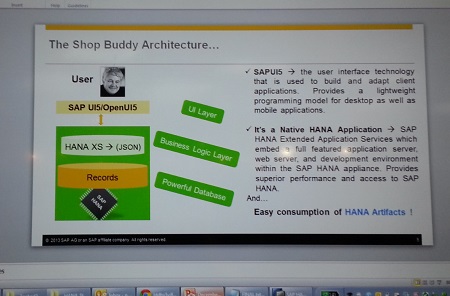 All right, Jelena, here’s the only other swag, and the only free stuff (except “SCN is 10” t shirts thrown to the crowd) that I’ve seen yet.  I could not get close enough to tell whether these are simple headphones, noise cancelling, or maybe MP3 players.  Anyone get one? 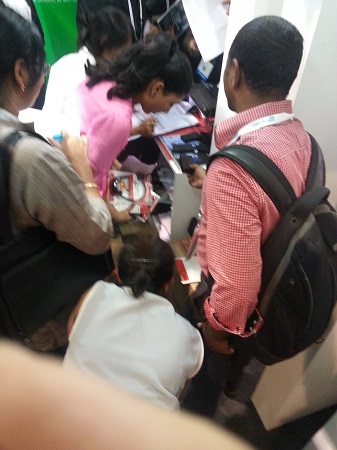 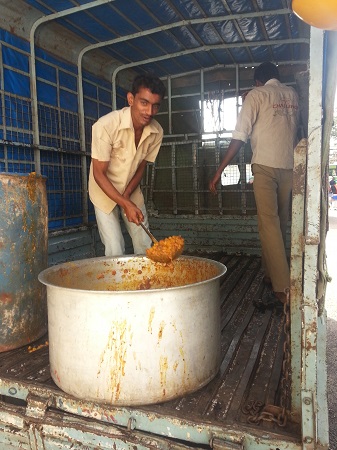 Well, I’ll admit I skulked in the back of the room preparing the images for this blog more that I was absorbing information from the speaker. I wanted to get an overview of the tool and process, which I guess I did. In the Mentor magic tradition, may hands-on lab partner was SAP Mentor alum Bhavesh Kantilal – perhaps he spotted me before joining my table… 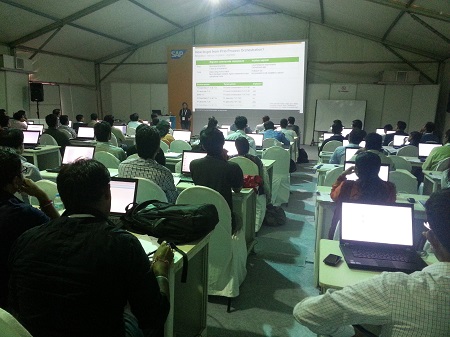 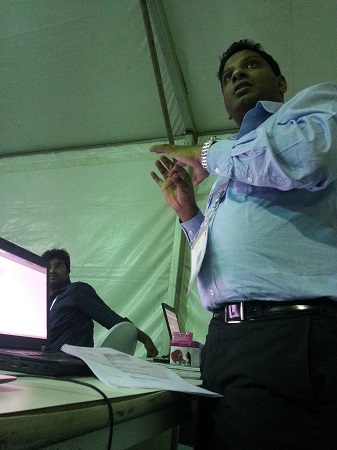 All for now.  One more day of TechEd, then a short break before heading home to who knows how much snow.  It was 84 F in Bangalore today…

Thanks for the recommendation of a presentation at the ASUG 2014 Conference. I'm sure that Greg would be open to your suggestion.

I do like the pictures interspersed with the text better - it helps the story more.  AND a huge thank you for keeping us in the loop on #techedBLR.

Stay in BLR.  It was 17f in my neck of the woods this morning!

17? Ouch. We're running at about 50 today, which is unseasonably warm but "normal" is still above freezing - 40 or so. I do love the Gulf Stream and North Atlantic Current...

> pictures interspersed with the text

Other than it's easier to type without the images popping in and out of the way (perhaps you've experience this jive behavior?), the other reason I'll often put all the text first is to help those who read the blog from slow links. When the pictures are intermingled, the text will jump around until all of the images are loaded.  When text comes first, it's loaded right away and you can read without interruption.  I'm working on the Day 3 post next and I'll take these comments from my adoring fans into account. 😉

Yes, there is difficulty with intermingling pictures and text, but your adoring fans always appreciate your efforts.

Steve Rumsby - I chose "minions" over "hordes" as it sounds like a more glamorous occupation.  See: Official Blog: The bright side of sitting in traffic: Crowdsourcing road congestion data

They (Google) called us data feeders "crowdsourcing" but I'd probably limit that term to more voluntary contributors.  I doubt many Android phone users realize they are unpaid human traffic counters.

As I said there are hidden gems (minus HANA, Cloud, Mobile) lurking around in SCN that need to get highlighted. Transaction ANST_SEARCH_TOOL is one finding for me this year. The other one is Debugger Scripting (need to get my ABAPers enthusiastic about it 😀 ) that was presented by Kavindra Joshi at SITBLR session this year. He won best presentation and for prize I gave away unframed copy of "Quality isn't Job One" by Hugh Macleod.

Majorly bummed by lack of swag in Bangalore. I guess if not "the cutest" then "the most useful" title would go to the SAP scale. Does the smiley face become a frowny face if you go over the airline weight limit? 🙂 I guess since it's an SAP scale then you'd get to buy a separate module for that. And maybe with a HANA accelerator it could even get the weight limit information for every flight. All while the customer simply wanted to get an accurate weight figure. 🙂 Sigh...

Jim, Was a pleasure meeting you once again..

As for me drilling the instructors, I guess it was more me pushing them to give us ( the developers ) more power in true mentor fashion!

PS: My delayed response on SCN tells you why I am a alum now 🙂

Hopefully we will meet up at one of these events in the future.