Which is most disruptive: startup or big company? 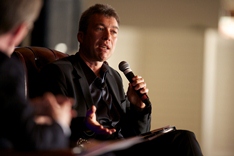 The disruptive role of startups may be sacrosanct in Silicon Valley, California, but Peter Graf, Chief Sustainability Office and Executive Vice President at SAP, (pictured at right), believes that large, established companies are equally important to innovation and disruption. Graf shared his views during a no-holds barred keynote interview at FT Innovate America last week with Sean Gourley, Co-founder and CTO of Quid. Hosted by Andrew Hill, Management Editor of the Financial Times, the lively discussion at Stanford University was followed by audience Q&A. Click here to watch the replay.

While Gourley took a pretty hard line delineating the innovation differences, as he saw them, between startups and large companies, Graf laid out a wider range of possibilities. For example, Gourley insisted that the risk of failure was a key variable impeding disruption at large companies. In response, Graf pointed out the confusion between continuous and disruptive innovation.

“For me, disruptive innovation is always a change in business models…there are so many adjacent fields around SAP where we can be a disruptor. For example, [with] in-memory technology, we’ve built a new platform and we’re using this to enhance the value of our applications.”

When Hill suggested that large companies talk about embracing failure but generally fall short in actually supporting it because they are inherently risk averse, Graf pointed to SAP’s adoption of design thinking to accelerate customer-centric innovation.

“In our design thinking approach of innovating through iteration, [we’re] failing early and often to find that right moment when you take an idea, and put it into a product. But frankly, what would SAP lose if one of those innovations it produces doesn’t fly like many other innovations that have been very successful at SAP? The upside of creating something that’s disruptive is much, much greater.”

Graf and Gourley found some common ground when the latter characterized any acquisition as “death” for a startup. Graf agreed that acquired companies require independence, something that SAP has embraced with its acquisitions including BusinessObjects, Ariba, and SuccessFactors. At the same time, he emphasized the value of interdependency.

Overall, Graf laid out a more inclusive, fluid vision for innovation where boundaries blur between companies of all sizes as well as partners and customers. He explained how SAP regularly crowdsources ideas internally and externally. These include partnerships like The Management Innovation Exchange, and developer challenges such as The Global Connected Car Contest 2013. In response to an audience member’s question about how SAP was making it easy for startups to interact with the company, Graf noted that SAP Ventures has raised more than $650 million for a total of over $1B investor capital focused on startups.

Some industry observers see 2014 as the year that the next generation of technologies will disrupt business models and entire industries. Everyone will be focused on figuring out how to use innovation for real business and industry change. The only way to do that is to continue working together.