Once again SAP TechEd was for me a great place to learn. I remember my first SAP Teched, in 2010, where I was so excited with so many good sessions to attend that I could hardly stop for lunch or a coffee break. Not that this behavior changed after some years…in fact I think it’s worse now since I also have my own sessions (Expert Networking Sessions) to present, meetings and other networking activities. At that time, after working with SAP for more than 10 years and with SAP Solution Manager for 5 years, I could for the first time meet in person the people behind the Products and ask questions directly to the source. It was also in my first SAP Teched that SAP Solution Manager 7.1 was first presented. I remember that my first hands-on session was about the new ChaRM Web UI in SAP Solution Manager 7.1 with Tobias Hauk, and I saved screen shots to send to my colleagues and to show to my customers the great improvements coming with the new release. The new release, as I already described in one of my blogs, changed the way the customers look at Solution Manager, specially regarding ChaRM and Service Desk (now ITSM).

This year again at SAP Teched I could see and practice some great improvements released with a new Support Package of SAP Solution Manager 7.1, SP10 (in fact SP09 and 10 together, also known as Feature Pack 2).  Some of these improvements are already described in other blogs here in SCN, specially in the ChaRM area. I will describe here what I learned about the improvements on BPCA – Business Process Change Analyser in the hands-on session ITM264 – Change Impact Analysis of SAP Upgrades using BPCA. This is for sure a session not to be missed if you plan to run upgrades in the next months.

It was a pleasure for me to support Rajeev Gollapudi and Sonal Kumar in this session. It was the first time I was supporting a hands-on session (a SAP Mentor support). I could help them answering questions of the attendees during the Exercises.

In this session, Rajeev explained how the Business Process Change Analyzer (BPCA) can help with doing an impact analysis of SAP upgrades with the new test scope optimization options.

First, Rajeev talked about the strategy for business transformation in major releases, explaining how to have continuous improvement in minor releases and changes with two value releases per year. 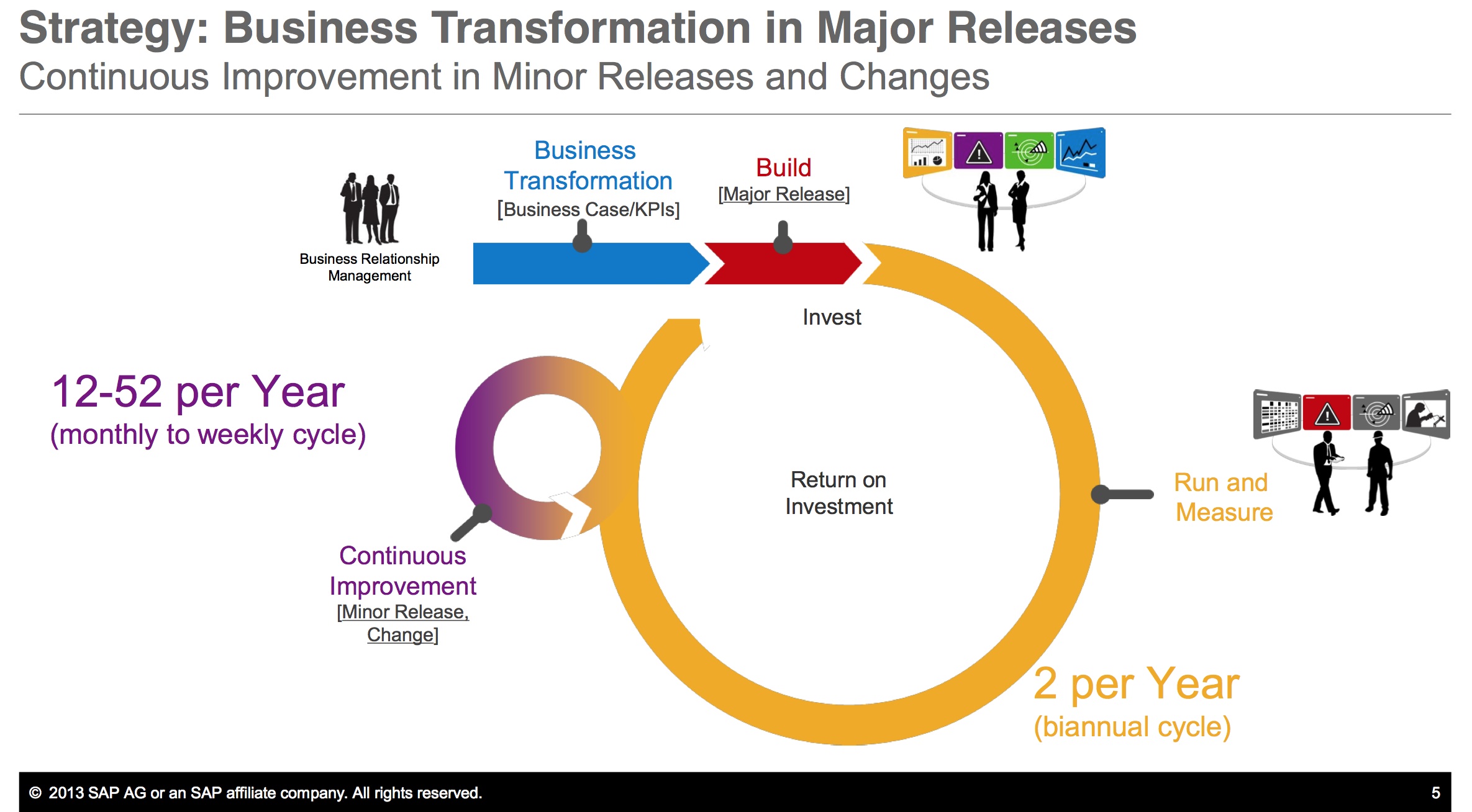 Then, he explained the SAP strategy for Test Management, with Solution Manager acting as a central hub to manage all SAP changes and E2E Integration Testing. We had an overview of the products and capabilities integrated with SolMan 7.1, as we can see in the slide below: 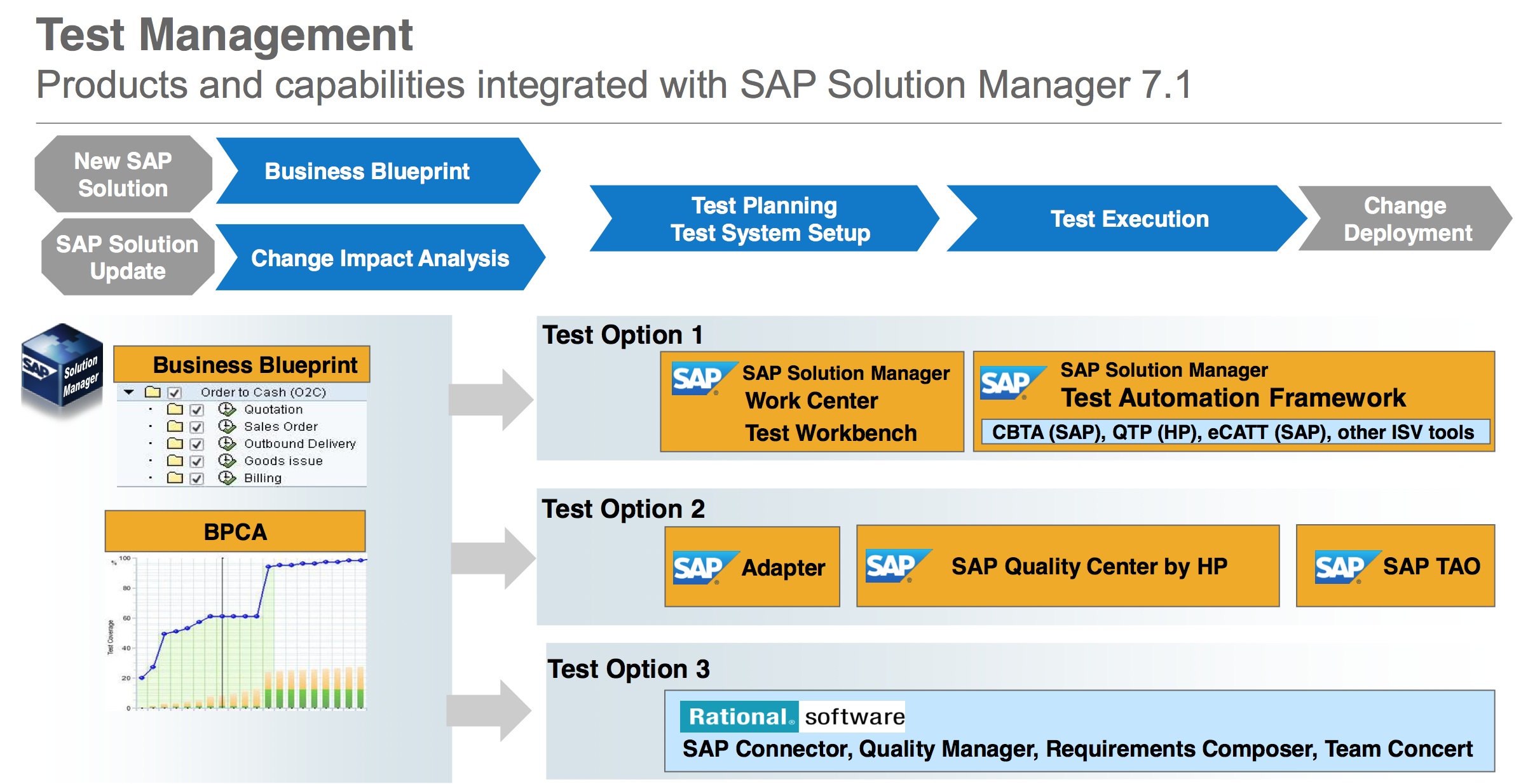 Next, Rajeev introduced the Motivation and Approach of BPCA. A main motivation is that planned SAP solution updates occur frequently, not only with SAP Support Packages and Enhancement packages being released but also with Customer changes. It’s usually very difficult for customers to know which critical business processes will be affected with these changes.  With BPCA it’s possible to have a Change Impact Analysis, where the customer can identify business processes affected and have a Risk-based test recommendation. Then, there is a Test Planning where Test Cases are reviewed and missing Test cases are created, generating a new Test Plan. And last but not least,  there is the Test Execution step where Regression Tests (manual or automated) are performed.

Then, we saw briefly how BPCA works, as shown in the slide below. I will focus on the improvements coming with SP10, so for more information about BPCA, please check http://wiki.scn.sap.com/wiki/pages/viewpage.action?pageId=221290030 One of the improvements of SP10 is the possibility to generate Semi-Dynamic TBOMs.

According to Rajeev, semi-dynamic TBOMs can be created automatically. A background job can be triggered where a source code scan is performed on managed system and unused objects are filtered out (based on Usage and Procedure Logging function of your system – UPL data). Similar to the generation of a static TBOM, the system analyzes the environment to determine which objects are in the executable entity. Picture below is from the session:

Since last year we are waiting for the UPL function to be available for BPCA. I remember that SAP TechEd Vegas and Madrid attendees were excited when this function was mentioned as a planned one.

BPCA with Test Scope Optimization, delivered with SolMan 7.1 SP01, gives a Smart ranking of Business Processes / Process Steps, with highest impact and lowest total test effort and consideration of process attributes to mitigate risk. You can identify your test scope and significantly reduce your test effort for regression tests.

In SP10, new functionalities were delivered.

During the exercises, we could:

We first reviewed a project in SOLAR01 and SOLAR02, checked the test cases assigned to a process step and changed the System Role to Production. The assignment of the test cases (manual and automated test cases) would be used in the test scope optimization of BPCA.

A SAP GUI screen will open. We clicked Generation of Static and Semi-Dynamic TBOMs. 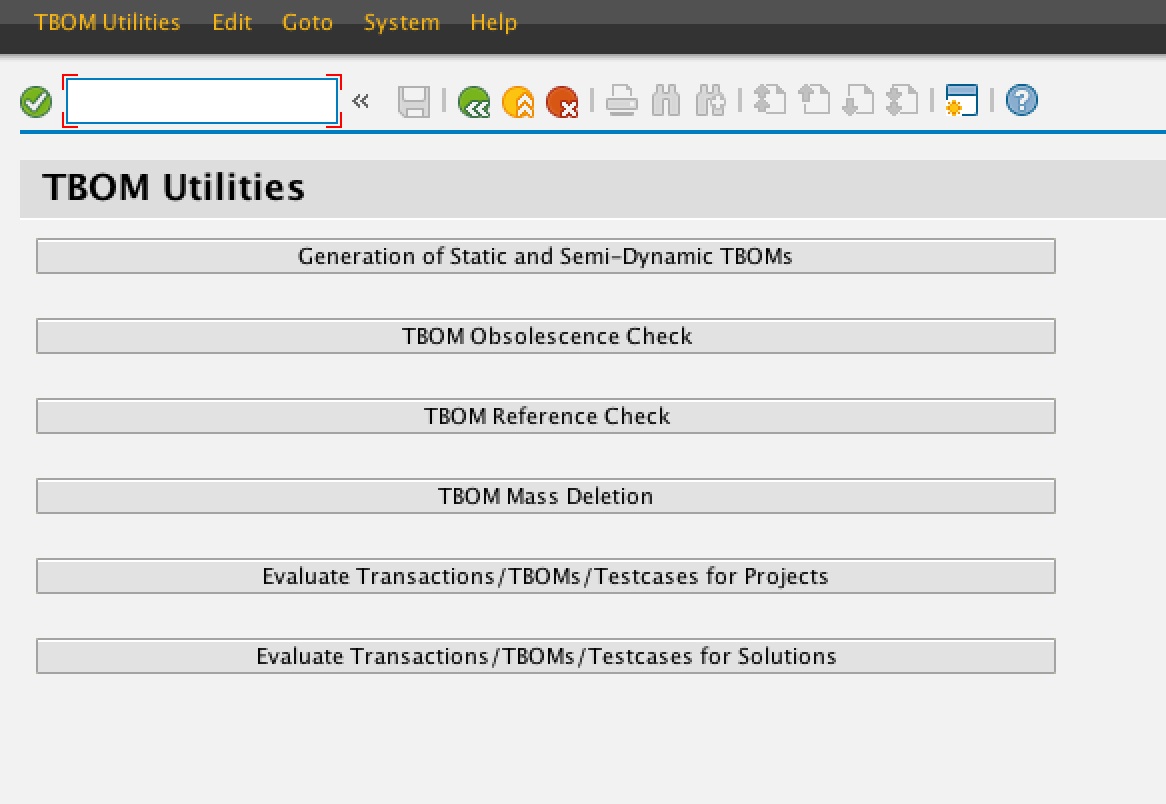 Then we saw the screen below, where we could select the Solution/Project for creating the TBOMs. In the UPL section we had to select the Production System Role. 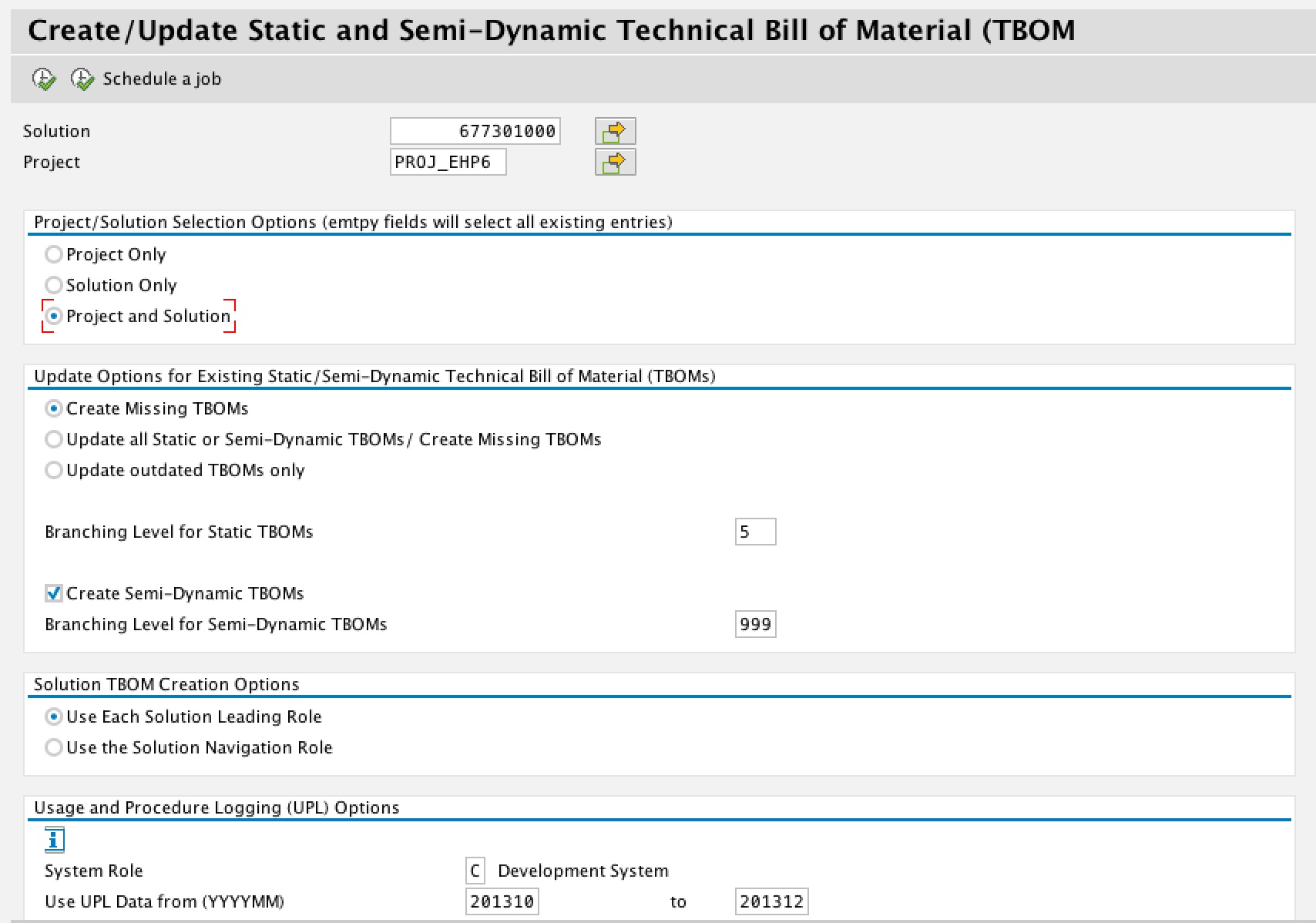 In this exercise, we could run an analysis for a ECC Support Package using Dynamic TBOMs, and use test scope optimization approaches to reduce the overall test scope. We used a SAP delivery transport request corresponding to a SAP Support Package 01 for SAP_APPL in ECC 6.0 EHP 6 for that.

The main screen is the Test Management Work Center->BP Change Analyser. In this application, we selected Transport Request as Impact Analysis type, the system and client where the transport is located, the number of the transport (could be more than one) and the Business Process Scope of the Impact Analysis (a project, a solution or both).

Example of a Change Impact Analysis screen in SP10 with type Transport Request and Project/Solution as scope. 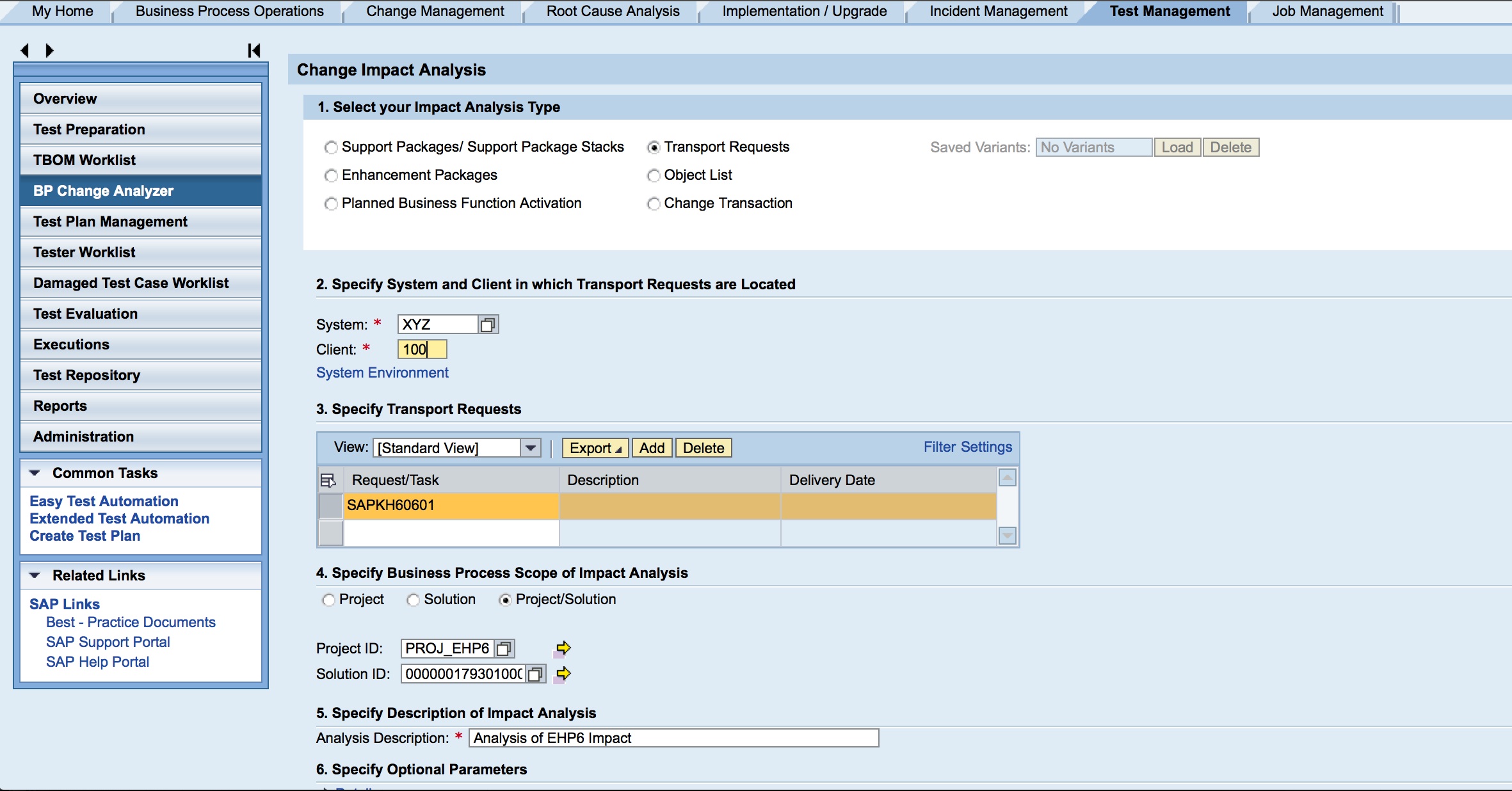 The result is all the business processes impacted. Then for the result we run the “Optimize Test Scope”, which calls a Test Scope Determination UI.

We can see below an example of the results overview (next pictures from ITM264):

In the Test Optimization Ranking tab we can see the processes included in the scope for 100% test coverage and see the test coverage at each process step. 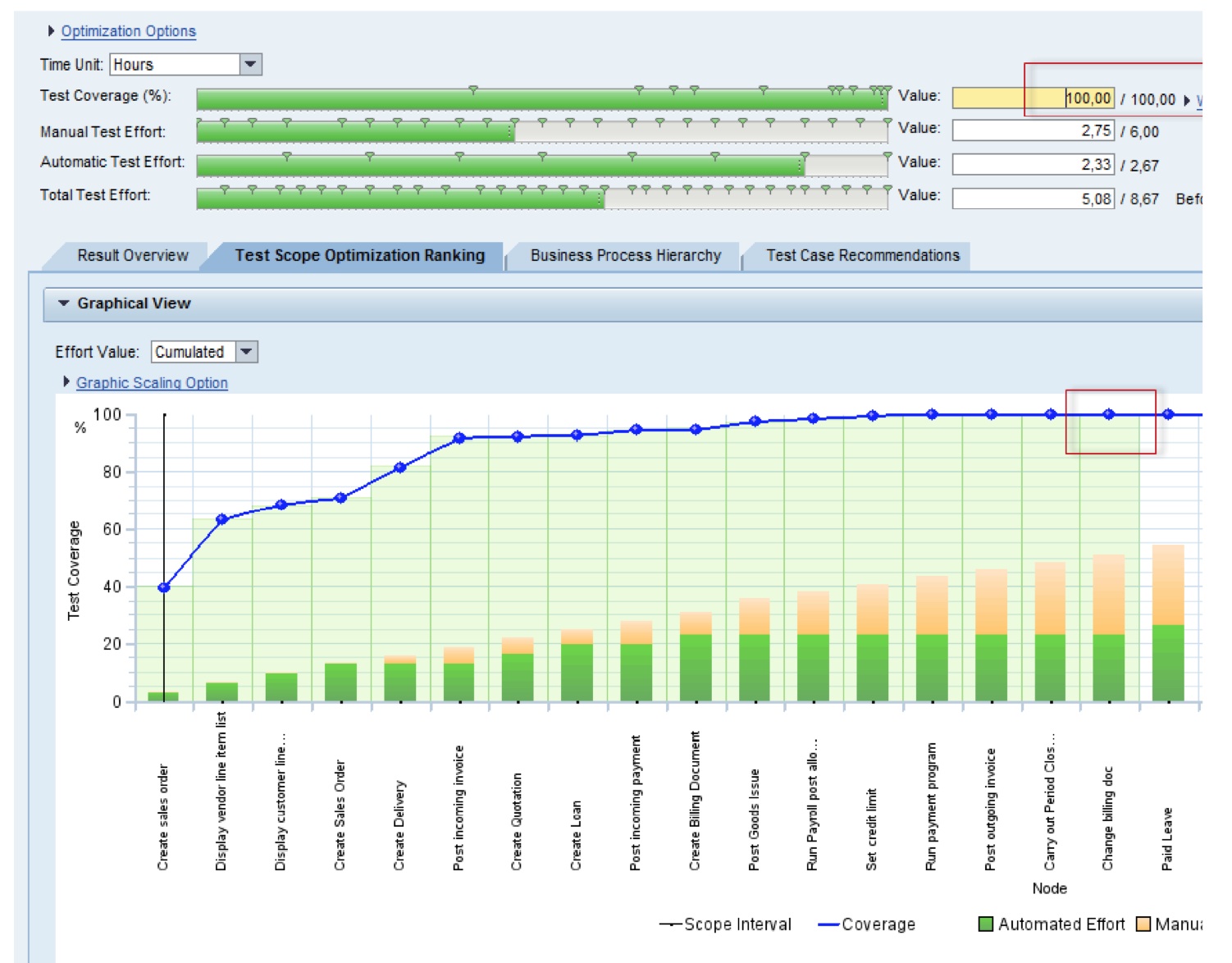 We also could see ranked list of process steps and which test cases are included in the scope. In the Test Case Recommendations Tab we could observe that BPCA was recommending to create a new automated tests for a process step. From the same Test Scope Determination UI we can create the Test Plan.

In this exercise, we could review the semi-dynamic TBOMs created using UPL.

When the job is finished, the log will show the process steps for which a TBOM was created. In SOLAR01, we go to a process step and select the TBOM tab in the Attributes  Maintenance window. We can observe that a “semi-  dynamic” TBOM was created by the background job for that node. 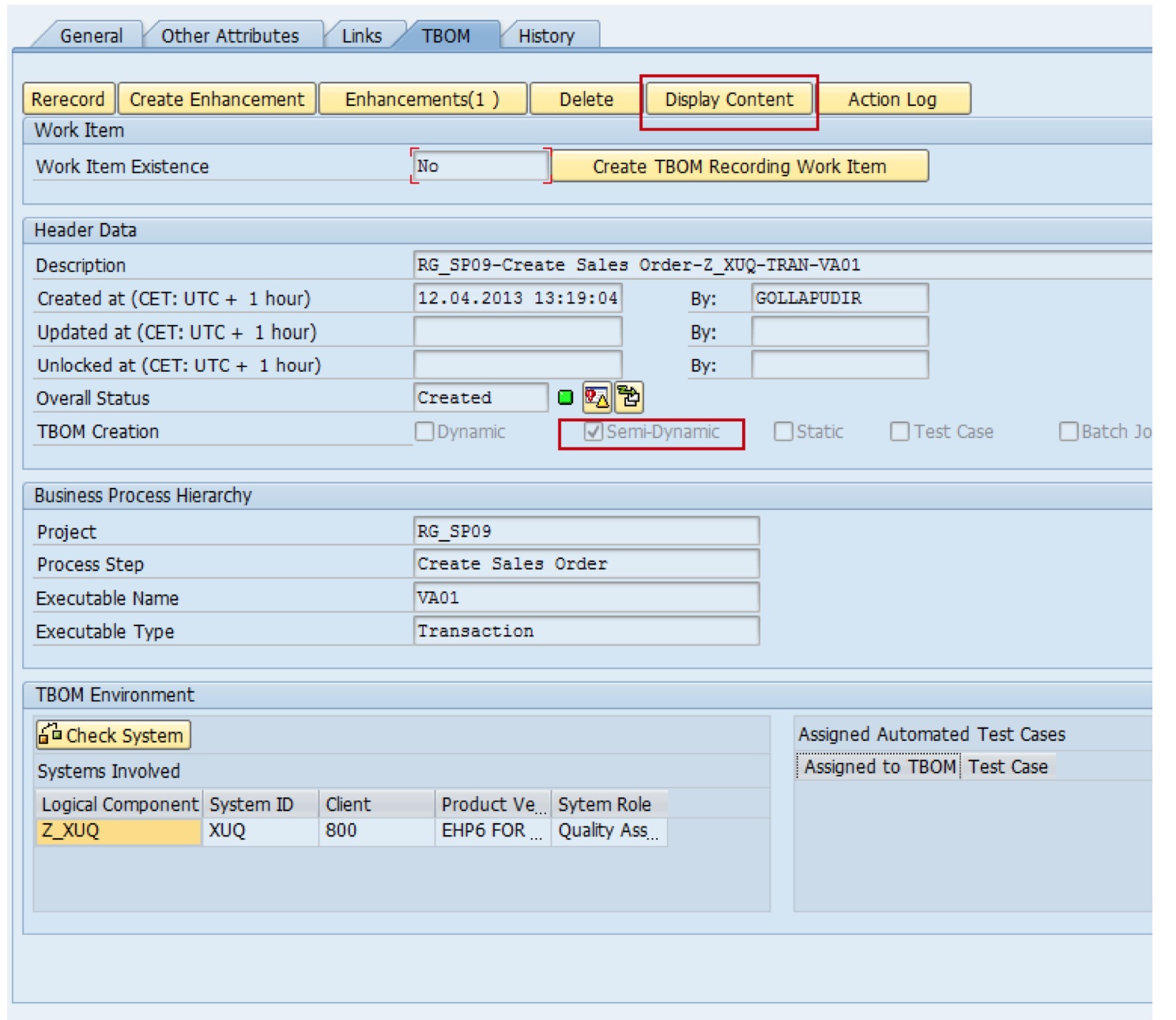 In this exercise, we could run an analysis for a ECC Support Package based now on the new semi dynamic TBOMs, and use test scope optimization approaches to reduce the overall test scope. As in the 2nd exercise, we used a SAP delivery transport request for that.

We could see that the result was different from the exercise 2, which used Dynamic TBOMs, specially the number of objects in the support package impacting each process.

In the pictures below we can see the different results. Note that the graphs show missing tests for project/solution that were not shown in exercise 2, and the number of Impacted processes with Test Scope Optimization was lower. The Manual effort was much lower. The total test effort in hours and the number of Test cases were also much lower. 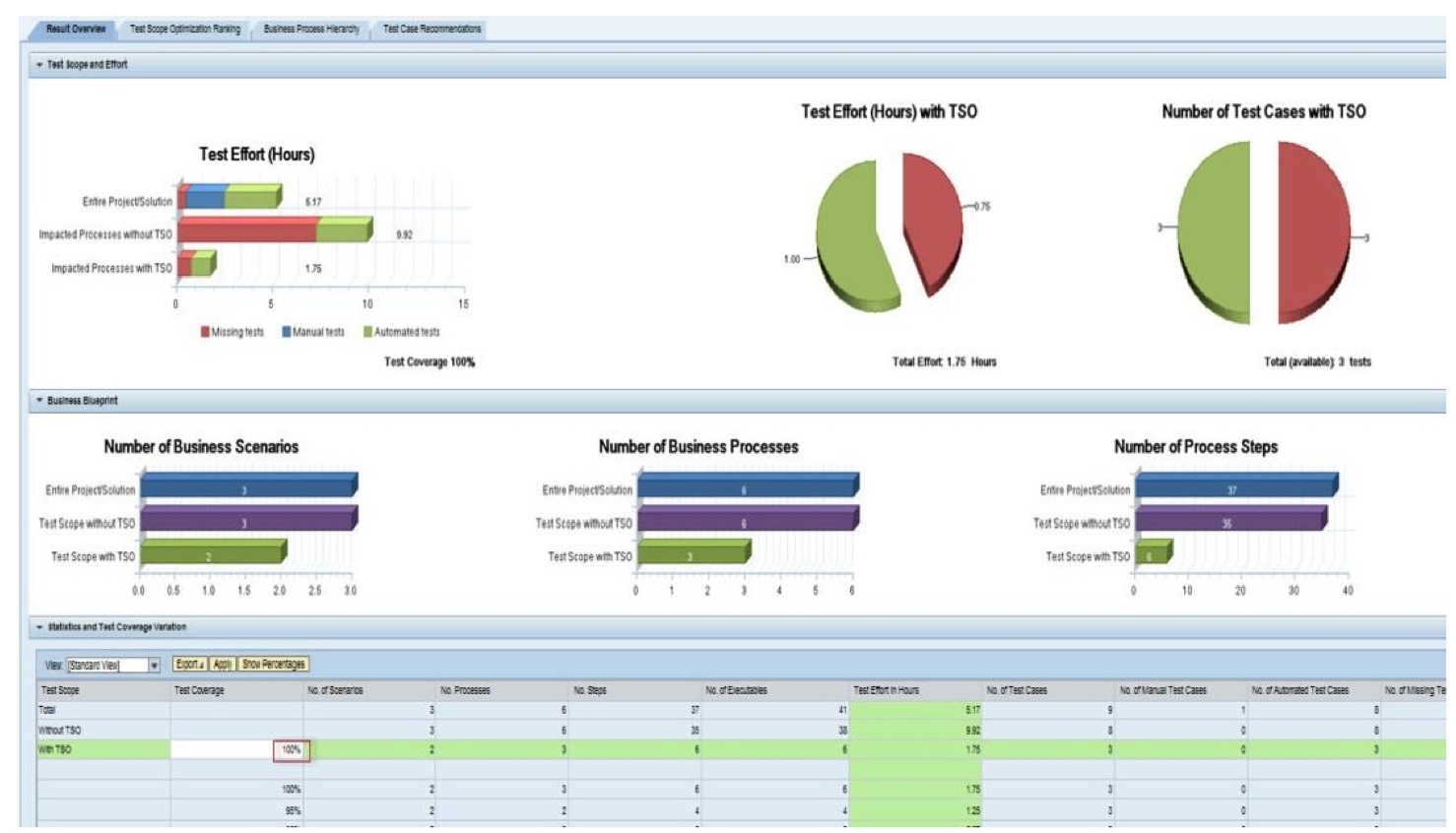 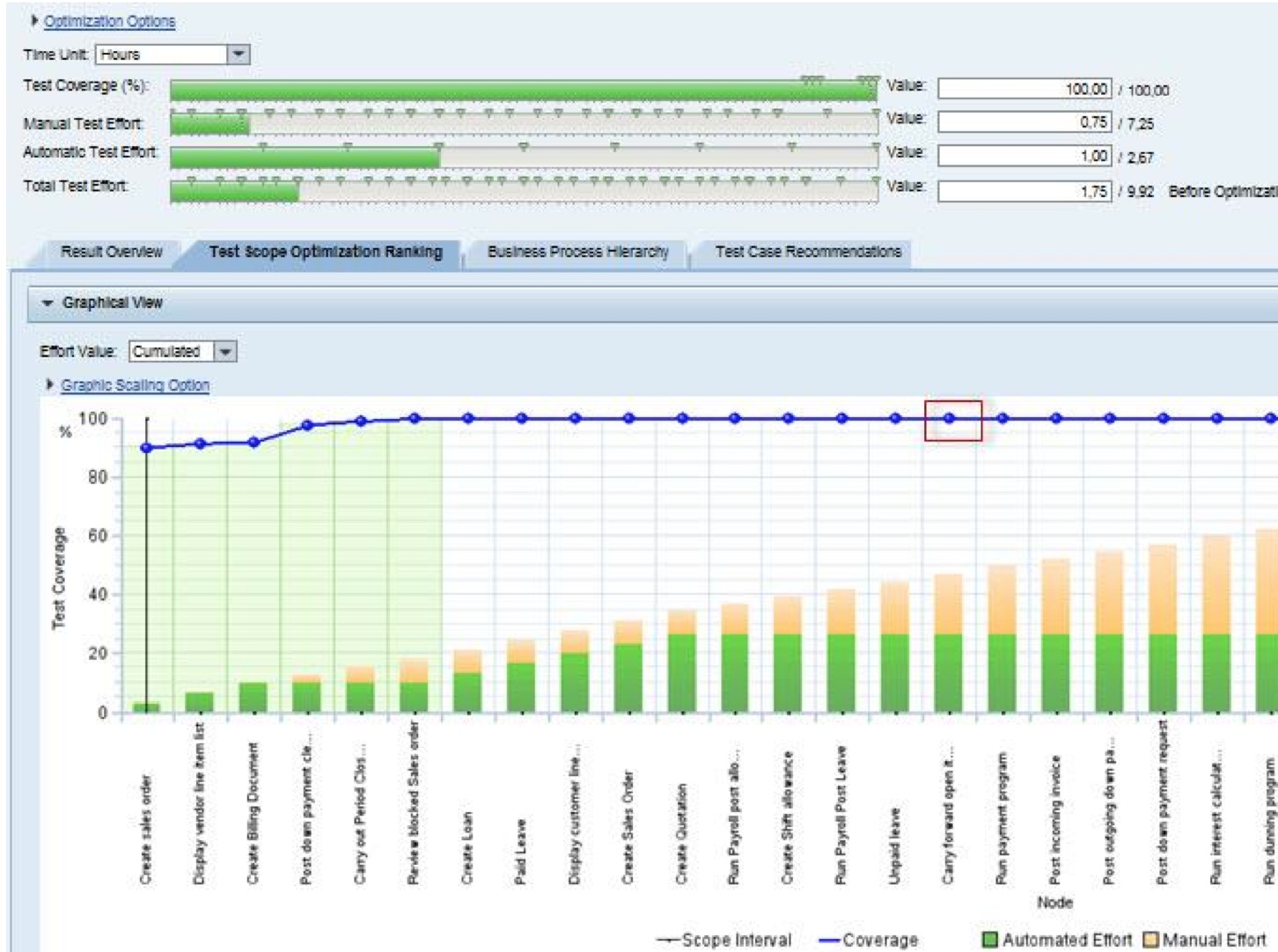 It’s planned to be delivered a new application called Scope and Effort Analyzer. This is also something customers are waiting very ansious. The first time I heard about it was during the Teched 2012.

This new functionality is supposed to fulfill the following customer needs:

2. Identification of required developers for custom code and modifications adjustments

When it’s available, the new functionality will provide:

Thank you very much for sharing this ! Indeed BPCA is evolving a lot. Another promising trend I see is more and more customers are willing to 'give it a try'  on BPCA. 🙂

Were there any sessions in BPCA which talked about HP ALM integration functionality in SP10? I am interested in exploring BPCA+HPQC option for Test Management.

I wrote this blog to help you: BPCA Integration with SAP Quality Center by HP - Where to find information

Thank You Raquel.Greatly appreciate your help.  I surely update here when I successfully explore this option.

Congratulations on the blog, I appreciate your comments and knowledge sharing in this community.

Thanks a lot Rauel, It was really a great lesson to us....

Wonderful explanation about BPCA. I appreciate your effort.

I have a question. I am trying to implement BPCA to our SAP Landscape but facing problems and ended up in this thread!!

I am facing the following queries by management:

I have everything set up (Projects, TBOMS etc). I did SPRO changes to Return Sales Order (RE) but BPCA suggests all VA01 transactions including Standard Order (OR). With Test Scope Optimization, I end up testing one Standard Order where as my customer wants to test only Returns Order.

Nice work....thanks for taking the time to document this.

I have a question about UPL, in particular in relation to ABAP webdynpro objects and TBOMs.  I have UPL set up and it is collecting data (/sdf/show_upl on the managed system confirms this).  I have executed a webdynpo application and this is captured in ST03, but does not appear in the UPL.  Not surprisingly, it is also not an element in the TBOMs created...so obviouslywill not show in the BPCA analysis.

Do you hav any experience that might expain or - better - solve this.

Many thanks in advance,