The future of citizen engagement – learning from the Swiss!

Since the middle ages, a remarkable event has taken place in Switzerland that speaks to the power of direct democracy and citizen engagement. All the voters from Appenzell Inner Rhodes, one of the “cantons” or states of Switzerland, gather together in the town square to discuss and vote on candidates and initiatives – this event is called the Landsgemeinde. 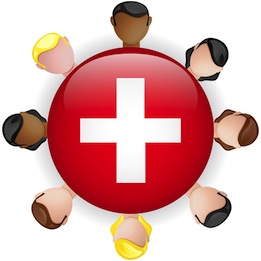 It is a stirring sight to see citizens filling the square and literally making their voices heard on the most important issues that face their country and their daily lives.After a special church service, the highest officials in government — including the governing council and justices – march to the town square. The spectacle matches the importance of the event. Rhodes cadets carry colorful banners. Harmonie Appenzell, the canon’s music society, plays a rousing ceremonial march.

In the town square, the acting governing chairman welcomes the people and then something quite remarkable happens — every citizen who wishes can step to the podium and give his opinion or criticism of the government. Each citizen can introduce ideas, either in the form of general suggestions or formal initiatives.

And then the citizens vote on the matters before them. The Landsgemeinde elects the seven members of the governing council, as well as the members of the cantonal court of justice and the chief judge. This is truly direct democracy taken to the extreme.

In earlier times, men would gather in the square to cast their vote by raising their swords. The rapiers used in the ceremony would be passed down from generation to generation. Today, Swiss citizens in Appenzell hold up voting cards rather than swords to vote.

Beyond Appenzell, all other Swiss citizens have the opportunity to engage in direct democracy through frequent referendums and votes on of public initiatives.  These can range from changing the speed limits on highways, to transforming the corporate tax system in Switzerland!

The concept of continuous citizen engagement and direct democracy is one of the key foundations of the Swiss system which has helped this small country excel. In 2013, the World Economic Forum’s Global Competitiveness Report ranked Switzerland’s economy as the most competitive in the world (ahead of Germany, Japan and the US), while the European Union cites it as the most innovative country in Europe.

Understanding and addressing the concerns of citizens is one of the fundamental priorities of governments and public sector agencies. Although the Swiss approach of direct democracy and Landsgemeinde, is not practical for many countries or even large cities, the concept of engaging with citizens, giving them a larger voice on day-to-day matters and responding to their needs in a timely manner is a fundamental element of the public sector strategy.

Instead of using elaborate and complex surveys or even worse, waiting for the results of the next city council election, governments and local agencies can look into the behavior and feedback of the citizen’s in real-time. They can uncover patterns, predict future needs and take appropriate action by analyzing the vast amount of information that is produced every second by their citizens, their employees and their assets – this is what we call Big Data.

At its heart, it is a way to determine what people really want by seeing how they act. You can readily see how retailers and manufacturers would use this technique to provide the most appealing merchandize and marketing campaigns and respond to consumer needs – the governments and public sector agencies can do the same

A recent report survey by Bloomberg Businessweek Research Services found that more than 80% of public sector leaders are betting on innovations in real-time data platforms, analytics and mobility to use Big Data to their advantage. In my next two blogs, I will show how places as diverse as Boston, Tokyo and Cape Town are using technology and Big Data to give citizens a more direct voice in how their governments are run, so together they can find solutions to some of their more pressing problems.