Get ready for higher PF deduction and lower take-home pay

Our in-hand salary is likely come down significantly, if the Employee Provident Fund Office (EPFO) goes ahead with its proposal to redefine the salary component used for calculation of provident fund contribution.

In its circular issued on 30 November, EPFO said, “All such allowances which are ordinarily, necessarily and uniformly paid to the employees are to be treated as part of the basic wages.” This necessarily means that conveyance, transport and special allowance would also be included in the salary component used for calculation of EPF contribution, effectively reducing your take-home salary. The EPFO later put the guidelines on hold.

However, recent reports, citing sources, say that government will go ahead and notify the norms.

At present, 12 per cent of your basic salary is deducted for contributions towards EPF account. Your employer is also required to make a matching contribution. The employer contribution in most cases is included in the cost-to-company (CTC) or the gross salary of the employee.

An employee’s salary is divided into various components, the major being the basic, conveyance, housing rent allowance (HRA) and special allowance.  Besides, the salary could also include overtimes and performance incentives in form of bonus and commissions.

Bonus, HRA, overtime, present from employer, commission or any other similar allowances have been specifically excluded from the definition of basic wages.

But if the new guidelines come into effect, all such allowances would be included under basic wages, thereby increasing your provident fund contribution. 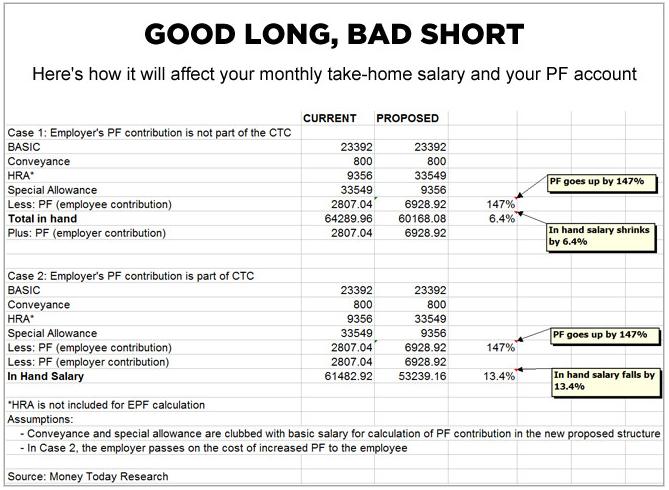 Good information with good Analysis. but I think Goverment will not approve this as the economy demands more take home to increse the spending power.

This is my view. let us finger cross for good... 🙂

Yes Ankit They shouldnt go for that norms. Already we are paying more tax Now they kept an eye on PF They need money This is one source.

If they come with up those norms there will be more deduction for employees.

I dont know, why govt decided for this what is the main reason behind ??

We have Manmohan and chidambaram , who are good finance ministers but this provision will not serve good purpose to the employees i agree with ankits view , spending income should be more

Good analysis and useful info for us. Fingers crossed for govt.decision!!!

It should nto be accepted by the employees. Hope for the best...

Yes Jyotsna.  If that is the case All politicians should work in the companies  They should impose those rules to politicians. 🙂

On the flip side this might bring in some positives to the nation as the amount of money sitting in EPF can act as a bail from the humongous borrowing costs the government has incurred.  Their proposal in investing in infrastructure projects (and the sector is in dire need of investment) might also give a breather in revenue flow and create more employment.

More employment?? I dont think so  If their proposal is investing in infrastructure projects.

If they need of investments I believe there are other sources .

Income tax?? we pay to government   They generate money and use it for their own. If that is the case then they have lot of sources to invest. This is not the one. This is just to ditch employee and employer. 🙂

on other hand, The government is also responsible to provide neat and safety environment.

Having said that, if our nation was good with managing finances sans the corruption and the various distracted fulfillments, the situation might have been better, don't you agree?

Yes, I do agree with you. It is just because of corruption. If nation would have been good at managing finances then the situation of Higher PF Deduction wouldn't have come by now.

True.  It all boils down to the impact their decisions will have on an individual.  The repercussions are far too big to have any scope of reversal in case of failure.  And we've seen several times where initiatives have been taken for the "betterment of people" but we don't see the results due to poor execution and inefficient risk mitigation efforts.