It’s been a long time since I have written a blog. Through this blog I am going to share my understanding of Trfc’s gained while handling a production issue.

Last week a strange ticket came with so many Process orders (COR2) getting stuck in SM58 Trfc.

One of the biggest misconceptions we had was Trfc function calls are started as Background task in update mode even when the locks acquired by SAP are not released.

The understanding was corrected when we found in update debugging that ARFC are called as a new task at the end when all locks are released(Cross verified from SM12 🙂 ).Trfc’s and Qrfc’s are executed at the last via starting new task when all the locks have been released by the transaction. We were like fine if the locks are released why we still have locks. 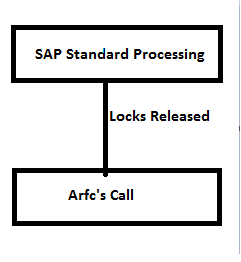 Everything looked fine. Transaction locks are released and only one function module running in background task so from where does this issue coming from. So we decided to think in other direction. Even if their is an issue a background job should try to post these error entries. On  checking the system we found out there was no job scheduled for RSARFCEX to restart such LUW’s. But we found out that there were so many background jobs created for other TRFC errored out entries in SM37. So we decided to look into this flip of the coin first to increase our understanding. 🙂

Why ARFC background jobs are not picking our entry but picking other entries to reprocess.

Then the next thing which we stumble upon was different ARFC jobs getting created for program RSARFCSE in SM37 to process SM58 entries.  Why was this not happening for our case? On searching a bit about it we found one nicely documented SAP KBA 1902003 – Many ARFC* jobs in SM37 and many “Error when opening an RFC connection” in SM58 at the same time .

We came to learn that only entries for which connection issues are encountered, the system creates the job automatically via settings maintained for the RFC destination in SM59.

Till now we were stuck but have some temporary solution (not good type) in mind. The only thought was what can be locking the process order. On brain storming with one my colleague it came down to there can be two possible causes as mentioned below.

So we decided to drill down more into the second option. We thought to check if there is any custom tables getting updated at the same time(this did the trick 🙂 ). We stumble on one of SAP table DBTABLOG our savior which maintains the custom table log if table logging is active. We found some entries in one of the custom table were getting created. Checked in our culprit FM is it getting updated via us no..no..no..no… Bingo finally something else is also doing its part in the background which we are not able to replicate in testing system.

On doing a where used list of the table found another custom FM getting triggered in the same exit via back ground task same as ours.  On taking a detailed look at another FM, we found out that it was acquiring locks on the process order along with lot of wait statements.Since we knew from our initial learning that Trfc’s are called after all locks have been released and they are called in parallel using starting new task. The second Z FM was not getting triggered as some conditions were not satisfied before the call.We simply triggered this second FM also in Testing client and we were able to replicate it.

The solution is yet to be finalized. We will share them once we have started with it. Meanwhile you can also provide us your valuable ideas which you have implemented in similar kind of problems.

Takeaway from this issue

Common Syntax of Trfc call is

very useful blog, thanks for sharing!

Nice to know.. Thanks for information....

Useful information. Thanks for sharing madan.

Trfc's and Qrfc's are executed at the last via starting new task when all the locks have been released by the transaction.

Common Syntax of Trfc call is

I don't think we can use tRFC(IN BACKGROUND TASK) & aRFC(STARTING NEW TASK) together.

Thanks for your feedback. I have mentioned wrong syntax have updated it thanks. Basically what i mean to say is lets say you are changing a delivery and you want to change it after it has been save (reason can be any you want to use it to create billing etc ir do some crazy stuff) so we need some place which gets triggered when transactions has released the locks which it has acquired. So basically you at save you can call this TRFC and you are sure it will be called when locks are released and you wont face any locking issue.

Thanks Suhas for your comments.

I dont agree with this statment ,if trfc's are called , they would be called finally only , when the locks are released. I have encountered locks in this case as well.

So trigger the FM to be called after locks in V2 task and that would be triggered after all V1 locks are released,

Now this has to be done within the dialog / background process itself which triggers V1.

If you call V2 within V1 , it behaves like a normal FM and gets executed immediately

Still trying this , is there any way to trigger V2 in the same LUW from a V1 task , so that after V1 locks are released ,it will process V2 and everyone has a early day off.