In this blog I would like to highlight a few of the most prominent features new features in SAP HANA SPS07 for developers building SAP HANA native applications.

If you want to review the general concepts of SAP HANA native applications and features which were delivered originally with SAP HANA 1.0 SPS05, I would suggest this blog:

If you are also interested in the new features which were first delivered in SPS06, I would also recommend this blog:

First, we have various improvements to the overall development tools experience in SAP HANA Studio.  Most important of those improvements is the removal of the dependency upon the HANA Client and REGI executable for the Studio to interact with the HANA Repository. This simplifies the update of the HANA Studio as the complete process can be done via update site now. Of greater interest to most developers will be the improvement in performance as now requests to the HANA Repository can be batched up. This improves performance, particularly in high network latency situations, but also improves activation accuracy when you are processing multiple objects which have dependencies.

For all the new enhancements to the Development Perspective main tools – and especially a demonstration of the improved speed of the repository interface thanks to the removal of REGI –  I would suggest this video.

The enhancements to the HANA Studio Development tools aren’t all infrastructure related.  We also see many usability improvements.

The Repository Browser, for instance, now has the ability to edit package details, it has a remove from client (allowing you to remove checked out files from the

local repository workspace), regenerate (forcing runtime regeneration without having to go through editing/activation), and better handling of deletion of content directly from the repository browser for non-empty packages. 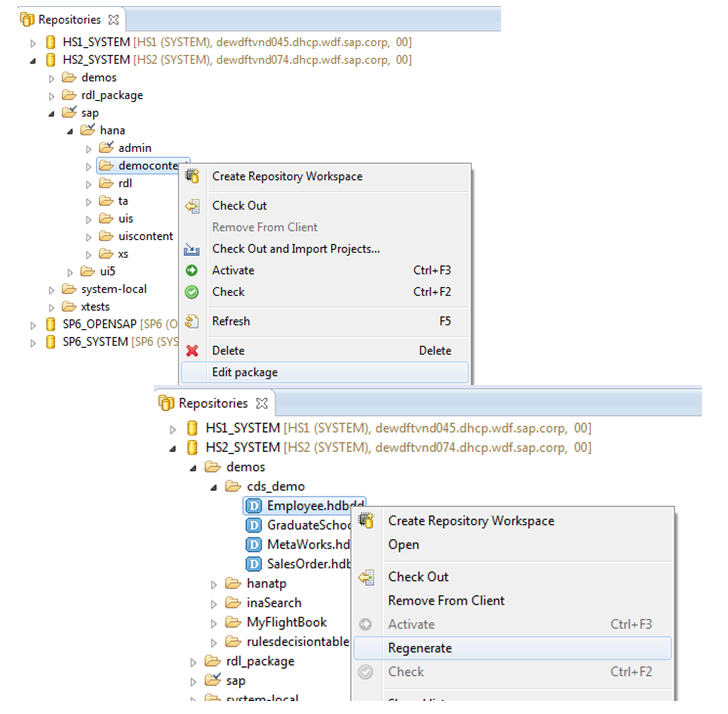 The Project Explorer has similar new features added to the Team Menu. In SPS06, the feature to view the Catalog for the system shared to the project was added. In SPS07 this feature is expanded to include the Repository Browser within the Project as well. 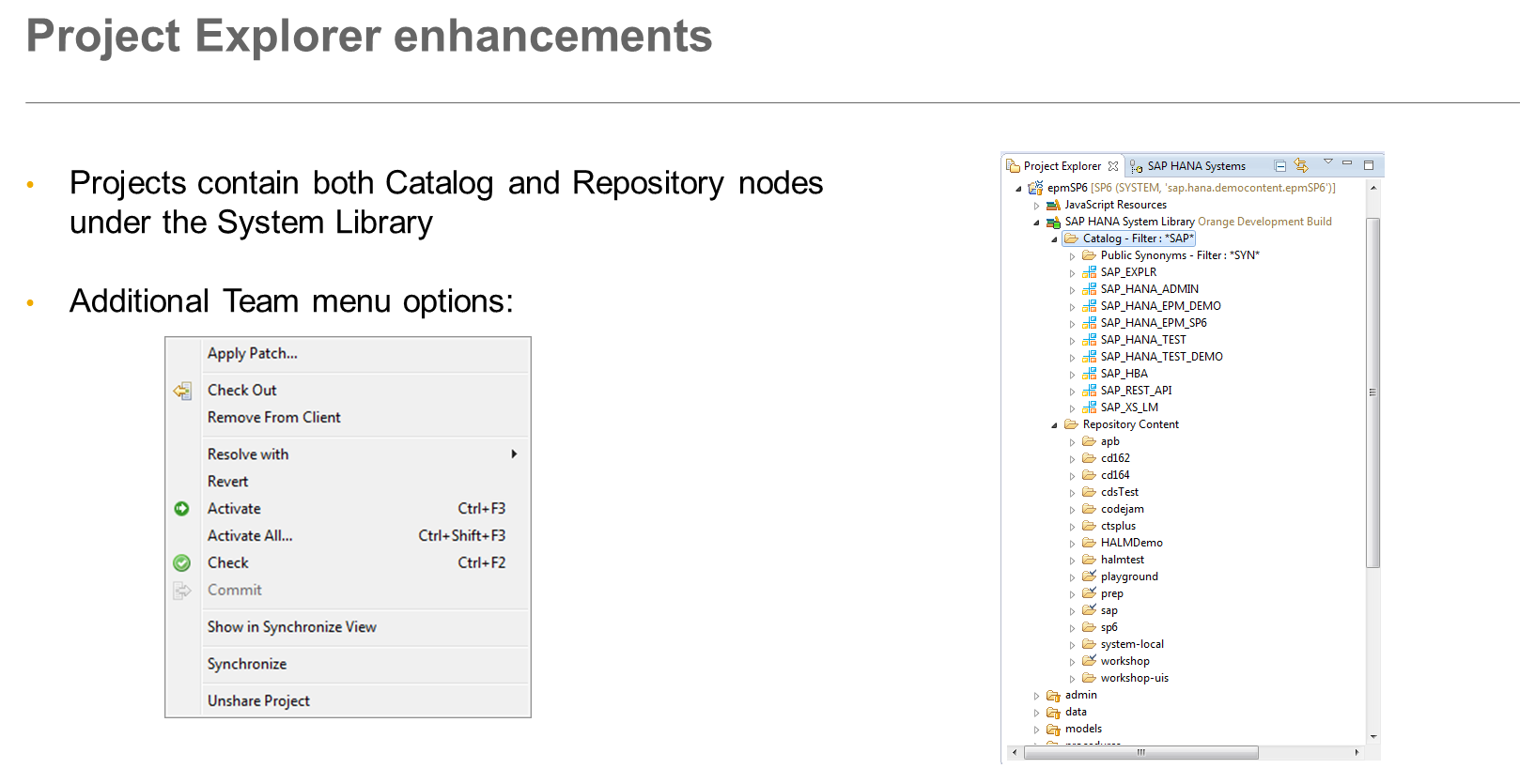 There is a whole new tool and perspective added for synchronization services.  This is especially useful when needing to view pending changes, such as deletions, for which there are no local resources.  For a full demonstration of this new synchronization tool, I recommend the following video:

There was also a focus on developer productivity throughout the tools in HANA Studio. For instance there are now File->New wizard entries for all the development artifacts in HANA development. These not only make getting started easier, but also eliminates the difficult to troubleshoot misspelling of file extensions. 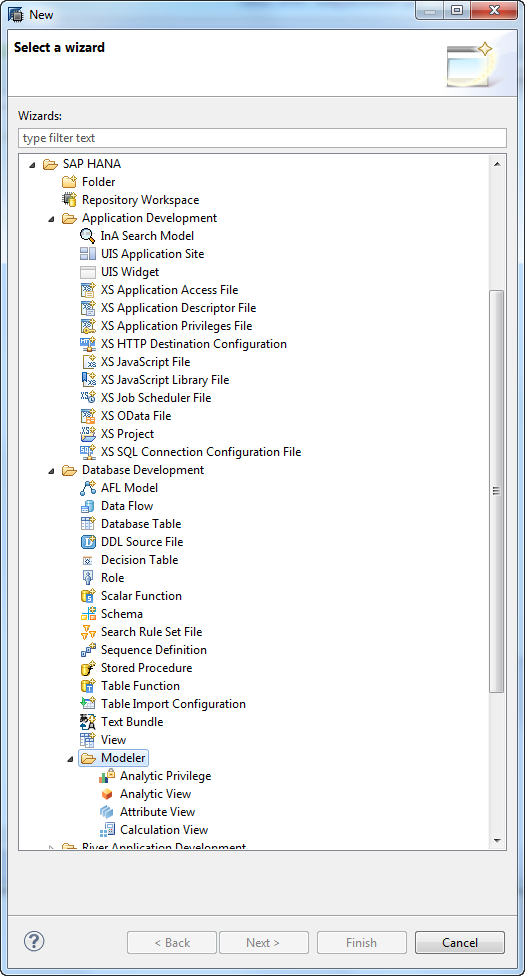 Remember all those times in SPS05 or SPS06 where you would have type the full URL of a service or web page to test it in the browser.  Well now those days are gone thanks the Run As feature.  This allows you to test XSJS, XSODATA and HTML content directly from the Project Explorer.  The content will open automatically in your default web browser.

Other enhancements include a new Activation Dialog which displays all inactive objects across all projects for the same repository workspace. 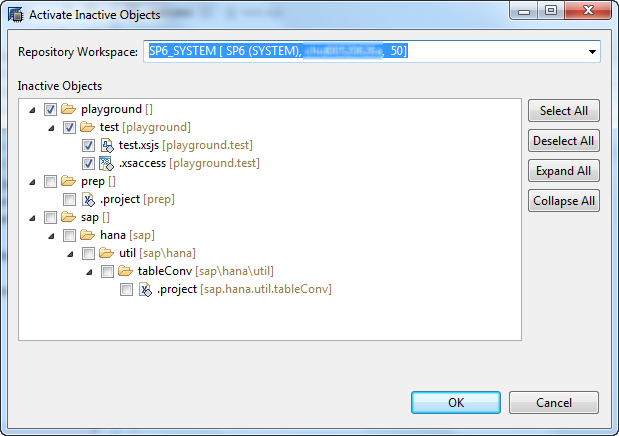 We also have a new generic text editor which is mapped to all artifacts without their own specific editor.  Today this this text editor may not seem like much, but it lays the foundation for future artifact specific enhancements such as syntax highlighting and code completion.

Of course we also have many new and enhanced features in the Web-based Development Workbench tools as well. In fact there were so many that I broke that topic at into its own blog:

The Change Manager offers the automatic recording of all changes to a change list.  This change list must then be approved and released by all contributors to the change list.  This way it can’t be transported before all objects are ready to be moved. It, therefore helps support multiple streams of development within the same package in parallel, reducing the risk of accidentally transporting unwanted changes.

For a demonstration of this Change Manager and how it becomes part of the development workflow within the SAP HANA Studio, please see the following video:

Another new feature which helps with parallel development of the same objects is Inactive Testing. We’ve always had the ability for multiple developers to edit the same object at the same time.  Each developers’ changes are stored in their specific inactive workspace. However before anyone could test or debug the changes, activation was necessary. At the point of activation, a merge of any pending conflicts would need to take place. Of course once a change is active it could also accidentally be transported (see above for a similar discussion around the Change Manager).

To better support such parallel development, testing of the inactive version of XSJS, XSJSLIB, XSODATA or static web content is now possible in SPS7. This allows a developer to test their localized changes directly from the server without overwriting or having to merge with other pending changes.

The requirements for using inactive testing are as follows:

For a complete demonstration of how to use inactive testing, please refer to this video:

Definition Language of CDS to define tables and structures. It can therefore be consider an alternative to hdbtable and hdbstructure.

In SPS07 we continue to expand upon the promise of CDS as a further abstraction layer. In addition to defining entities, it can now also express the relationship

between entities via Associations. For example, this syntax defines a header/item set of tables but also defines the relationship as well:

But these associations can also be used within the new View definition within HDBDD. Why redefine the relationship between objects over and over again within each view. Instead define it once centrally when creating the tables and allow all views to look up and reuse this relationship. This simplifies the syntax of the view creation considerably.  For example a view upon the header/item example above would look like the following:

Notice how no join criteria are specified. A field from the header table can be referenced simply by adding the entity name to the beginning of the field (HEADER.PURCHASEORDERID).

For a video demonstration of CDS/HDBDD:

One of the most often requested features is to be able to schedule jobs within HANA itself. Up until this point you’ve often needed to resort to scheduling jobs via the operating service on the HANA Server. But even that really only allowed for easy execution of SQL/SQLScript.

The new XS Job Scheduler allows for the periodic scheduling of both SQLScript Procedures and Server Side JavaScript. For a full preview of how to define and 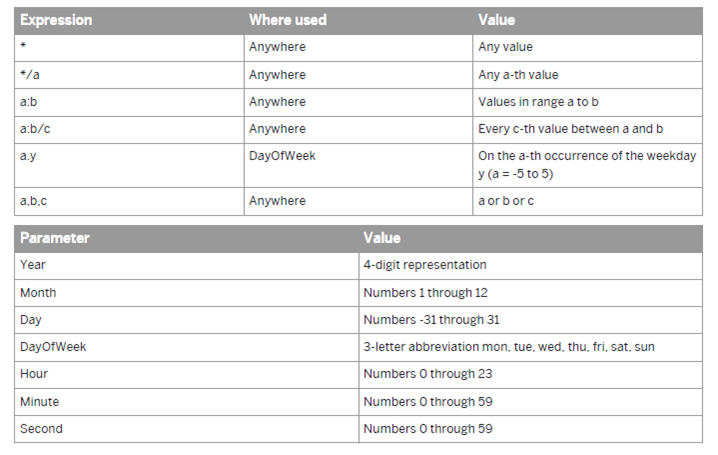 Similar to the role of XSJS in SPS05, XSODATA services are already established as the quickest and easiest way to generate read-only REST services from existing tables and views within HANA. In SPS06, those capabilities are complemented with new support for Create, Update, and Delete operations as well.  No longer are you required to create a custom service in XSJS if you only need to add simple update capabilities to your service.

Furthermore, if you needed some simple validation or other update logic; in SPS06 it could be coded in a SQLScript exit mechanism from within the generic XSODATA service framework.

However SQLScript isn’t always well suited to the kinds of imperative logic you might want to place in these validation exits.  In SPS07 this functionality is

extended to also include Server Side JavaScript based XSODATA exits.  XSJS exits also allow for better manipulation of the data returned from the service exit and the option to also make outbound HTTP requests as part of the OData processing.

All the details about new features in SQLScript have been covered by my colleague Rich Heilman in this blog: