The intent of this blog is to showcase as to how the SAP PI based  AXIS message protocol can be leveraged to conenct to the legacy applications via an enterprise messaging system like TIBCO EMS and a synchronous communication can be achieved from a JMS queue which is inherently asyncronous in nature.

The scenario describes a general Cashbalancing scenario which a SAP banking related process triggers to get end of day cash balancing from the core banking based legacy application via a synchronous call.

1.    SAP Backend is doing a request through a synchronous interface.This request goes through the axis receiver channel and is delivered as a SOAP message to the JMS queue. The TIBCO EMS is making a synchronous call to the backend system and receives the response. The response message is put on the same queue (although a temporary dummy queue). We expect now this response message coming into the axis receiver channel on a separate JMS response queue into PI. Also before the message is delivered to the TIBCO based JMS queue ,it expects PI to add a custom message header to the message besides the standard header and while the response is coming back PI should again remove this header while passing it to the calling system.

Pl    Please  check the appropriate axis libraries are deployed to the PI server as shown below, without this AXIS related calls won’t be possible.

Th    The requiredsda zip can be deployed  through the SAP NWDS deployment as follows. 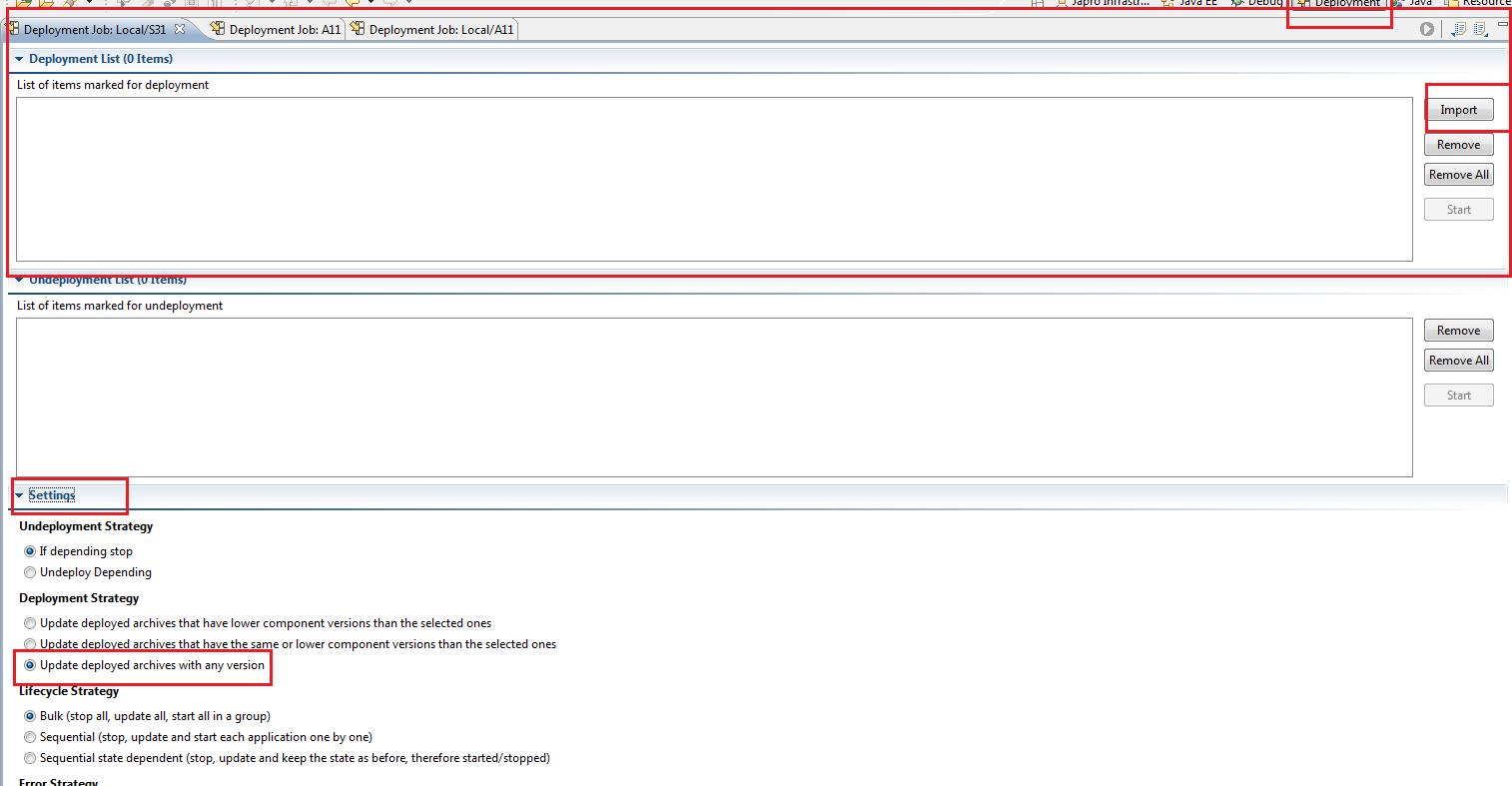 The configuration steps as required in the  receiver communication channels based on AXIS protocol are displayed as below. 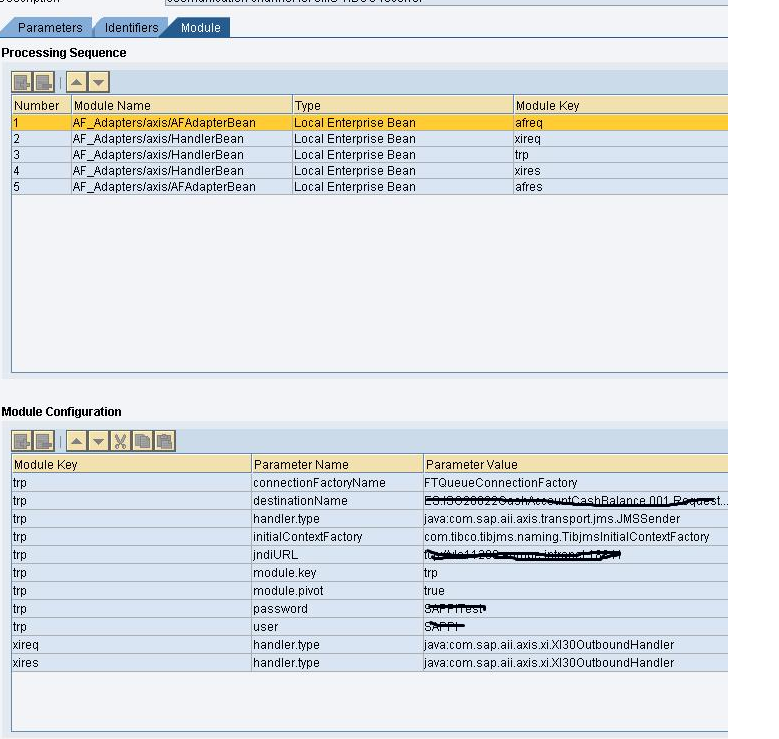 A    Adding Custom SOAP headers in addition to standard header.

The first sample configuration inserts two SOAP headers: one with name abc with fixed value ABC, and the other with name url with value of parameter transport.url of the Axis’s message context. When parameters name.n and namespace.n are set, this handler inserts the specified header with the element value given in parameter value.n. The second sample inserts the ebXML header whose element values are retrieved from the XI DynamicConfiguration header (ASMA). When parameters name.n and namespace.n are absent, the value given in parameter value.n is taken as the XML template for the header. 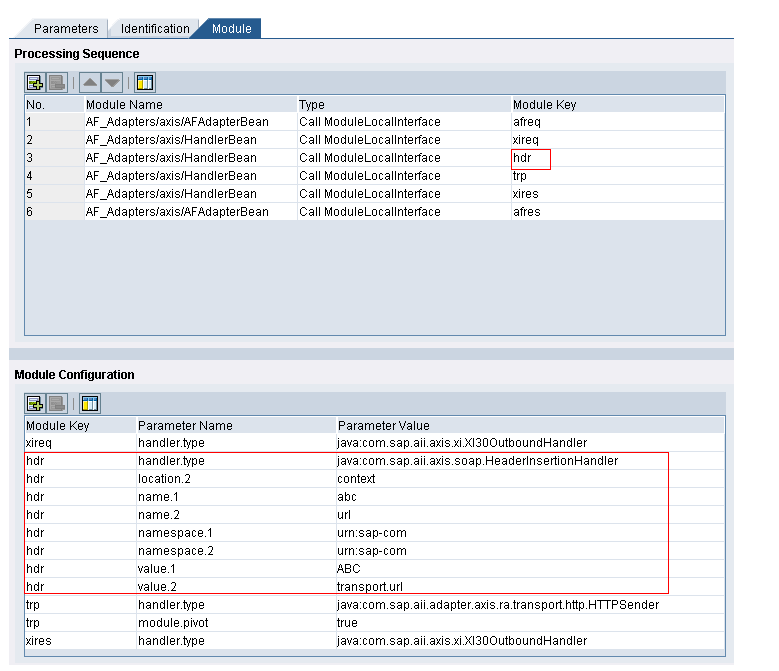 You can add additional parameter in your channel configuration. For example:

following value should be set in the module configuration in the  channel to tell TIBCO as to which queue it should use to put the response message back.

JMSReplyTo attribute should be automatically filled with the response queue that AXIS has generated, and queue name should be resp<queue name where response is to be sent  to>

Removing the Custom message header from the incoming response message.

Module parameter java:com.sap.aii.axis.soap.HeaderRemovalHandler should be used for module key hdr  in the PI sender JMS adapter channel to strip the incoming message of the custom message header that TIBCO JMS meesage has added to it. Once done the same nessage comes with only stadard header and can be processed by PI and sent back to the calling system.

Message that can be seen in the TIBCO monitoring.

As can be seen in the TIBCO message queue that response message has been put inot the response queue which is being polled by PI sender JMS channel from where it can be picked up and further proceed by SAP PI sender channel.

2258 is the sender queue we are calling and delivering the message to.

2254 is the response queue created by AXIS where we are listening and response is returned.

Good article. In our current project with have a very similar setup to the one you mention above. We have implemented the outbound synchronous  calls without much issue but have become stuck with inbound synchronous calls. Do you have an example of this configuration used with an inbound synchronous where Tibco are using temporary queues?

Any pointers would be greatly appreciated.

Using this information, I am trying to push message to MQ through SAOP Axis receiver.

Please let me know respective parameters of trp that above values should be mapped to in the module configuration.