You can use transaction SGEN to generate the ABAP loads of a number of programs, function groups, classes, and so on, as well as Business Server Page applications (BSP applications).

Before the generation is started, consecutive screens give you options regarding:

IMPORTANT: If you want to regenerate loads, make sure that there is enough space available in the database. The space required can be several hundred MB. Generation over all components requires around 5 GB of free space.

On the initial screen of transaction SGEN you can select the task that suits the purpose of the generation: 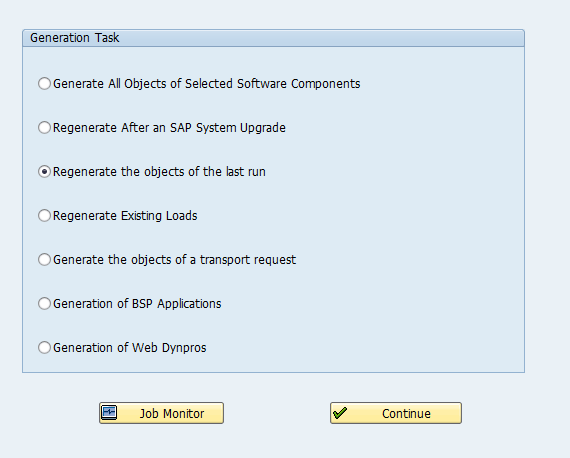 Choose this strategy if you want to generate the loads of all objects of certain software components. This may be the case, for example, if your system has been reinstalled. Here, the loads that are required for operation are not yet available and must be regenerated.

When you choose this task, you see the screen 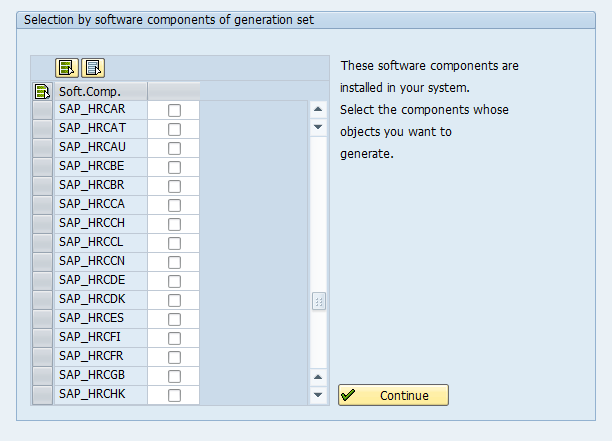 Regenerate After an SAP System Upgrade

After an upgrade, you have to regenerate the load of the ABAP objects in the system. Here, the following are required:

When you choose this task, you see the screen(Same as mentioned above)

Regenerate the Objects of the Last Run

This task is suitable, for example, in the following cases:

After selecting this task, the following two options are available to you: 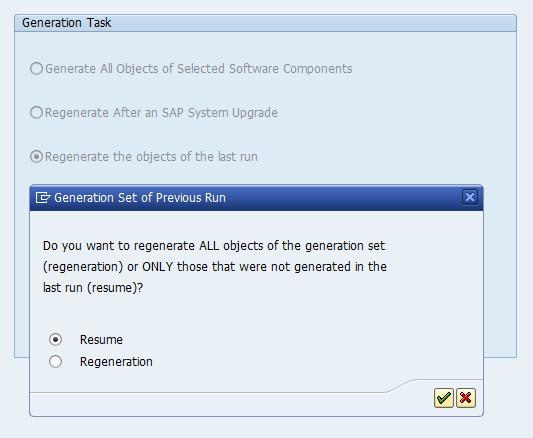 This task allows you to regenerate all ABAP loads and invalidated loads that exist in your system, and to generate loads for objects of a Support Package queue. The following options are available to you: 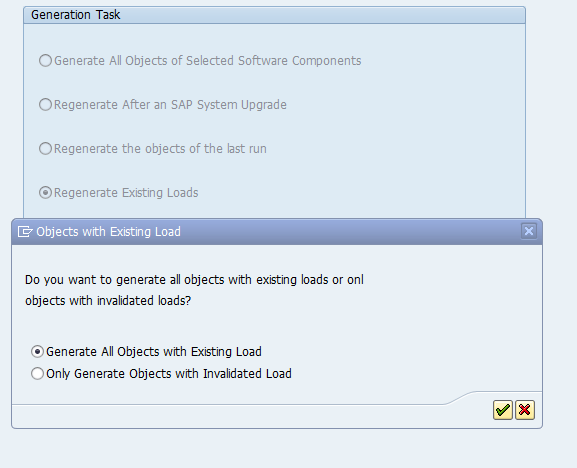 The load of an object is invalidated if, since the time the load was generated, activated changes were made to the object or to objects used by this object, such as includes or tables. This may occur by importing a Support Package (SPAM) or a kernel patch.If you want to generate loads for objects of a Support Package queue, start the task after importing the queue. The task determines the generation set using the invalidated loads in the system. In contrast with the Generate objects of a transport request task, this task also takes into account ABAP loads that were invalidated by modified Dictionary objects.

You also have the option of regenerating invalidated loads periodically (for example, every night or at times when system load is low) and automatically. To do this, schedule the report RSGENINVLASM in the background with the required execution time and period. This report determines the invalidated loads for each machine type in your system for the relevant time and regenerates them.

Generate the Objects of a Transport Request

This generation taks regenerates the ABAP load for all objects that can be generated in a transport request. It ignores, however, any ABAP loads invalid by modified dictionary objects. For these, use the task

After selecting this task, you can find and specify the transport request name directly by using the selection button on the next screen.

This tasks enables you to generate the BSP applications of selected software components.

Generate All Objects of Selected Software Components, Regenerate After an SAP System Upgrade, and Regenerate Existing Loads, since they are only optional. They can be handled as part of this task.When you choose this task, you see the screen

2. Select the server to be used for parallel generation. 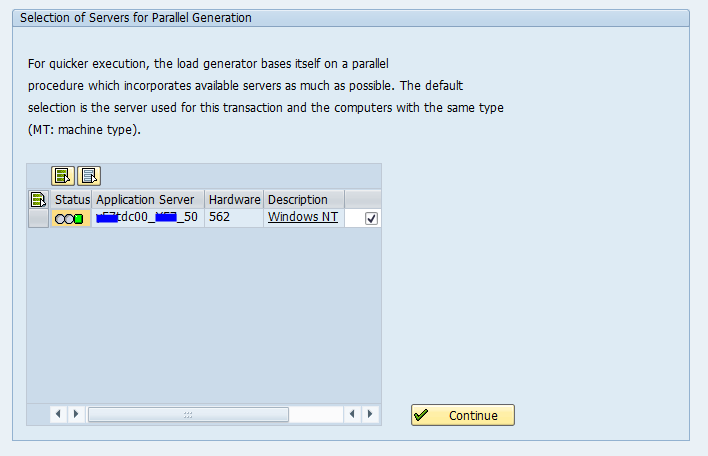 The screen Selection of Servers for Parallel Generation can be used to select those servers to be used for parallel processing. Note the loads are dependent on the machine type (MT) of a host computer. This means that the generation set is defined for each selected machine type in the table GENSETM.

If you want to exclude specific servers from the genreation or if you want to generate the load for a machine type other than the machine type of your logon server, then use the checkboxes to select the servers in questions and choose Continue.

Once you have selected the servers, the system starts to define the generation set automatically and save it to the database (DB table GENSETM). This can take some minutes.

Very Informative and thanks for sharing.