Visualization: A chart that fumbles with numbers – nothing more

Last week, I stumbled upon this chart. I went ballistic, because the “game plan” is a fumble. Let me try to tackle the problems:

So, what is the use of this chart? Right now – there is none.

graphomate has a different approach to visualizing data – our goal is to inform, not to decorate so we reduce our charts to the essentials without using “noise”. Our approach is based on the renowned SUCCESS– concept by Prof. Rolf Hichert. This chart breaks three of the HICHERT®SUCCESS rules:

It could easily have been changed into a more informative chart – I made the following chart with our graphomate charts add-on for SAP BusinessObjects Dashboards (Xcelsius) : 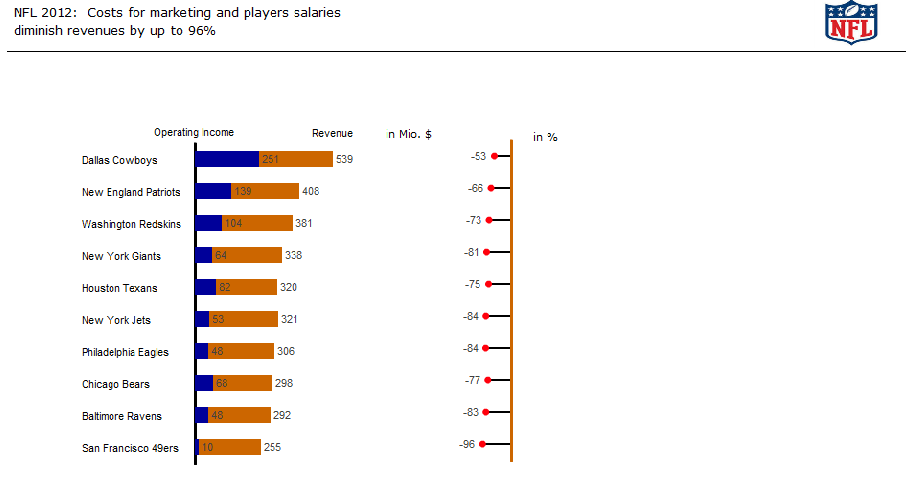 The representation of the figures in a bar chart lets you the see difference between revenue and operating income at a glance – and for those who want to know the exact percentage: the pin chart shows the figures. But although it is easy to convert a ballistic chart which contains litte informational value into a meaningful chart with our graphomate add-on – the original visualization is still good for optimization. 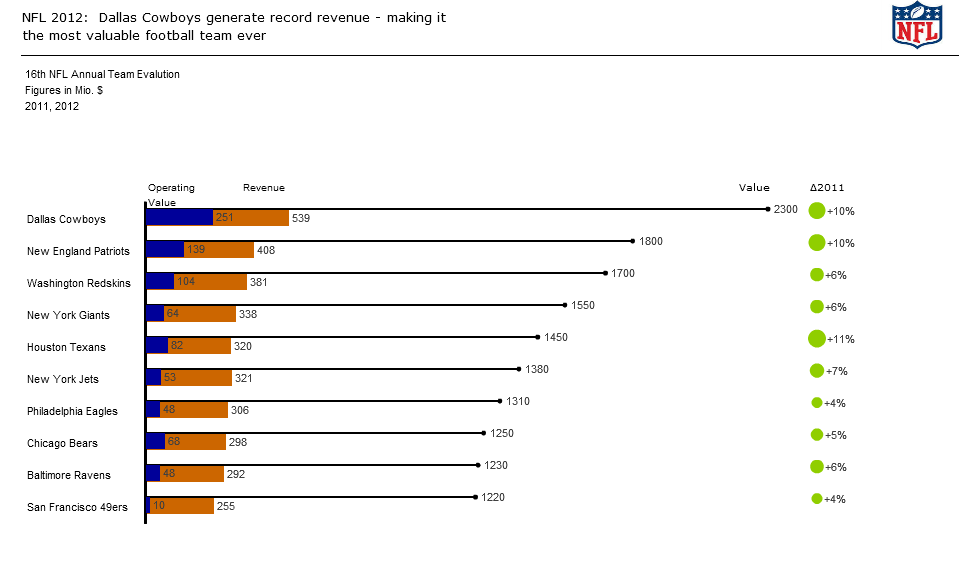 All the figures and data can be found on the Forbes Website, which also provides a lot of background data. Maybe next time, the original “designer” should a look at this website – perhaps his chart would not have been so cagey.

PS: A big thank to Manu for the writing and translation of this article!

While these types of examples are easy to pick apart, is there really much point? They are clearly designed to catch the eye, not communicate information (and they do that part, at least, very well).

I think the reasoning of the editor is likely to be "I need a picture here -- why not a funky chart?" and the infographic is up against another colorful image (e.g. footballers on a field) -- not a clearer chart.

You can, of course, try to argue that you can have it all -- a chart that is colorful and eye-catching as well as communicating information well. But I'm not sure that's true (anybody have examples)?

I agree with Elliot. We have to see the audience and design the chart. This won't fly for upper management in a corporate, but certainly appeals to common public who wants to see some thing flashy.

I agree with the point that sometimes an infographic should be fun, hip or eye-catching and that most of the ”meaningful designs” do not fall in either of these categories. But nevertheless: they should, at least, show some information. This chart would not have been so “useless” if the designer opted, for example, for a consistent scaling. This would not “destroy” the eye-catching Track-Design, but gives the reader the opportunity to see the enormous differences at a glance.

But , nevertheless, please don’t forget that we just chose this “bad” example to show our main purpose: to convey as much information as possible in a chart or dashboard.

We focus on meaningful dashboard design for internal reporting – an area where it is more important to see information not eye-catching elements and where it is important to inform with a “picture”, i.e. a chart or a dashboard without having to use 1000 words to explain what you see..

Manuela, I think I'll propose a rule of thumb: that there's nothing wrong with eye-catching charts, as long as it's treated just like any other pretty picture -- i.e. the actual useful information is in a proper format somewhere nearby. This is what I've seen on many corporate dashboards -- eye-candy on the cover to draw people in, but with properly-formatted information on other tabs (and over time, people start dropping the eye-candy, because it's no longer needed...)