Scenario: In house production material (Header material) is produced with three operations out of which second operation is performed outside (provided to vendor) due to various reasons like Machine breakdown, capacity problems…..

Create BOM for header material as shown below with CS01 with three components as input materials.

Create routing for material with three operations and for second operation assign control key PP02 as shown below with Transaction code CA01 and no need to maintain the work center….for the second operation

Assign the materials to the respective operations as shown below

For the second operation assign external processing parameters as shown below.

Enter details of Purch. Organization, Purchasing group, Material Group and others as per the requirement. 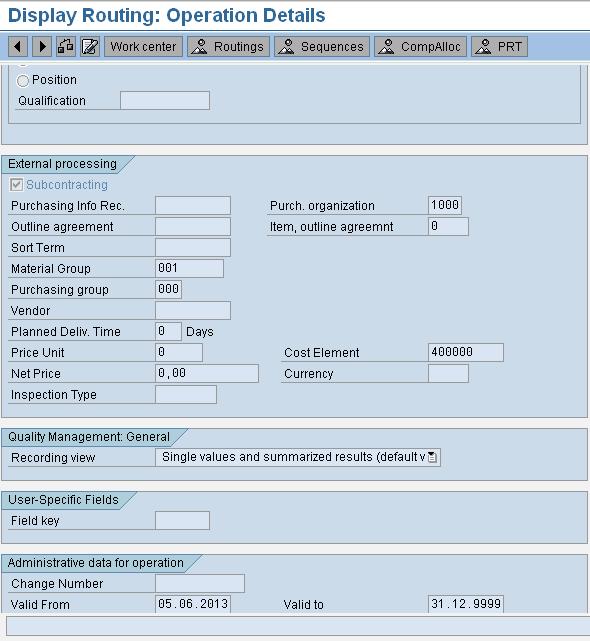 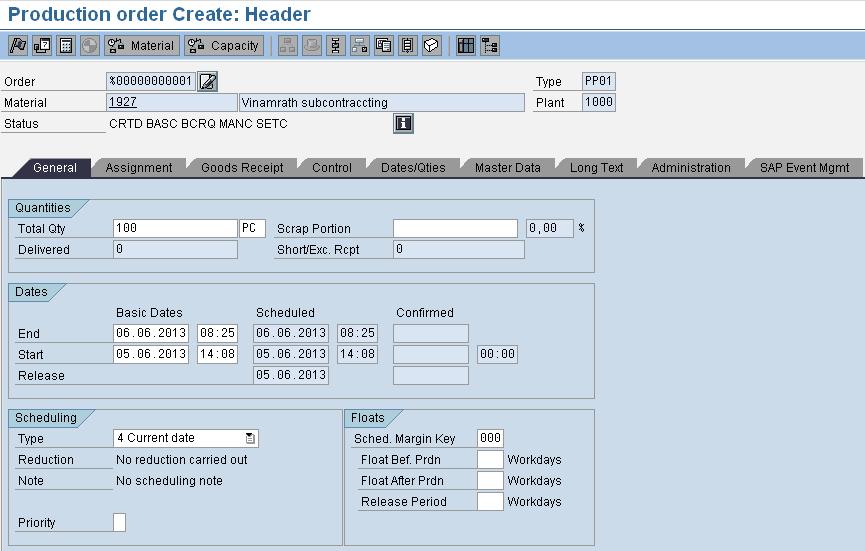 Go to the created Production order in change mode and select the second operation and go to operation details as shown below.

Check for the generation of Purchase Requisition in the Ext. Processing Tab. 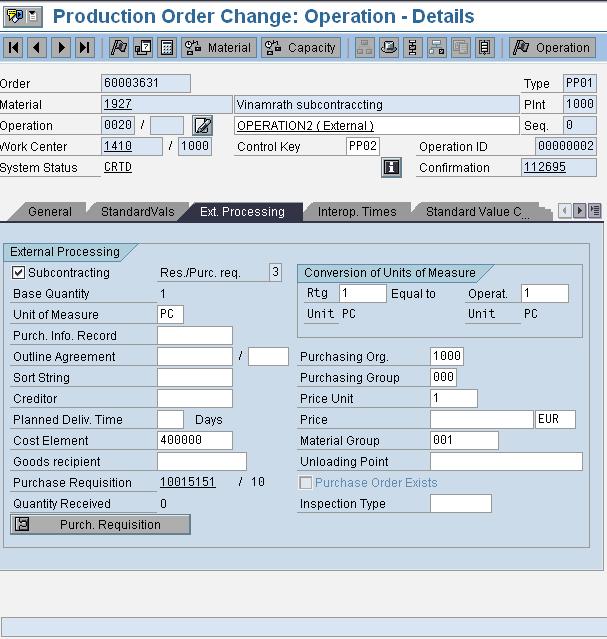 Now release the Production Order and save the order 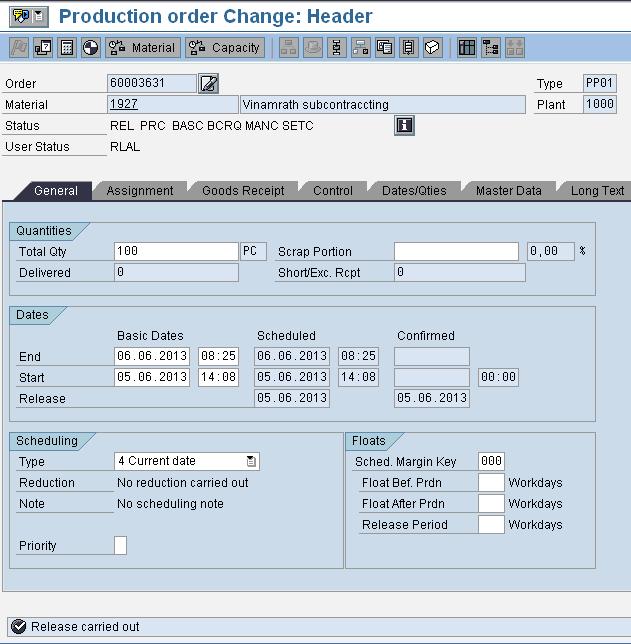 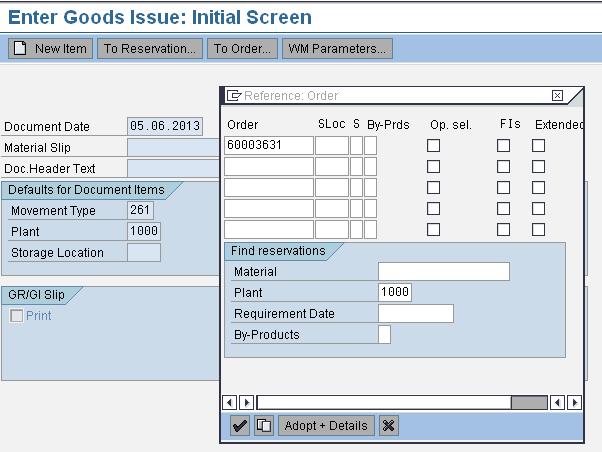 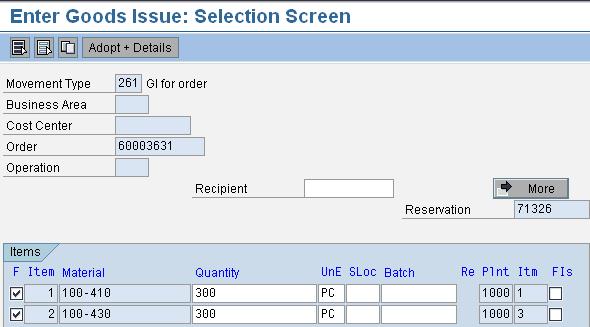 Now save and components are posted 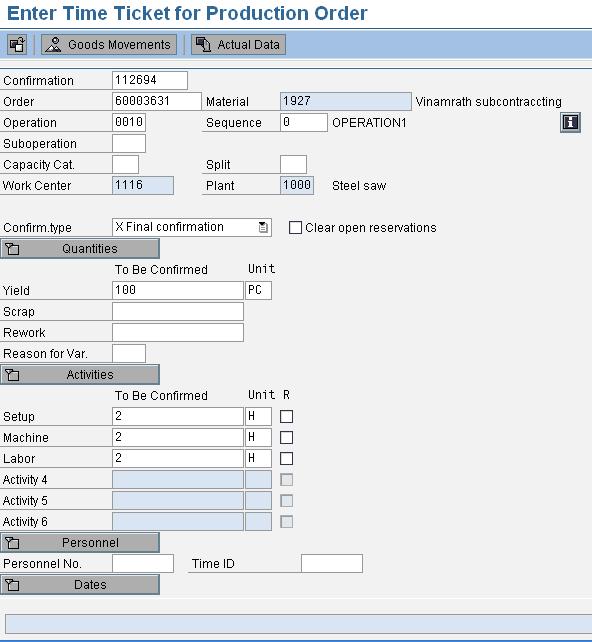 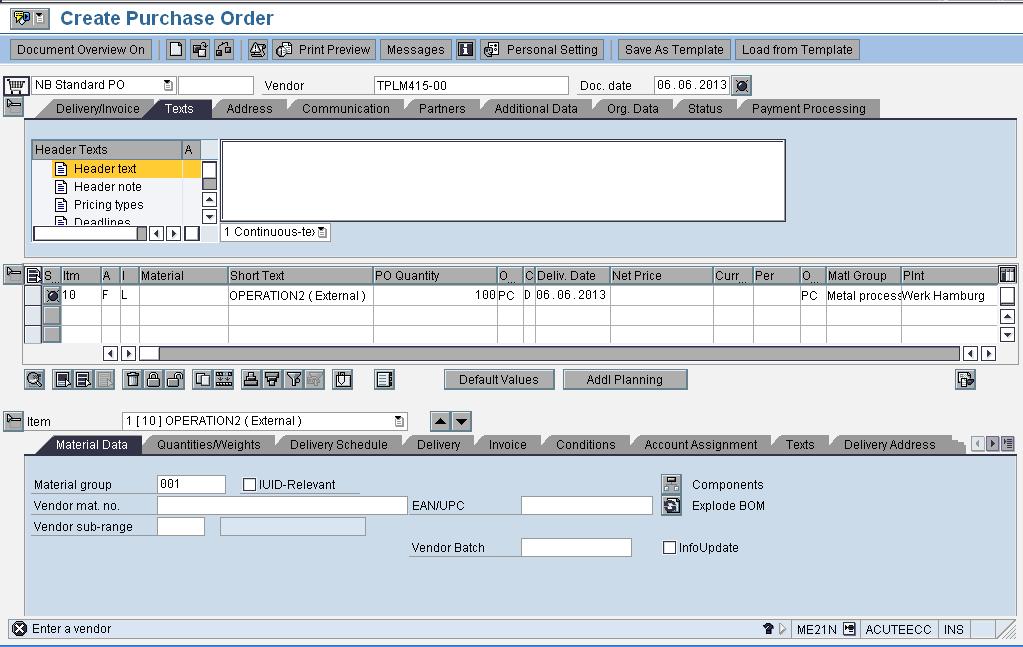 Enter all the required details and save the document. Now the purchase order created 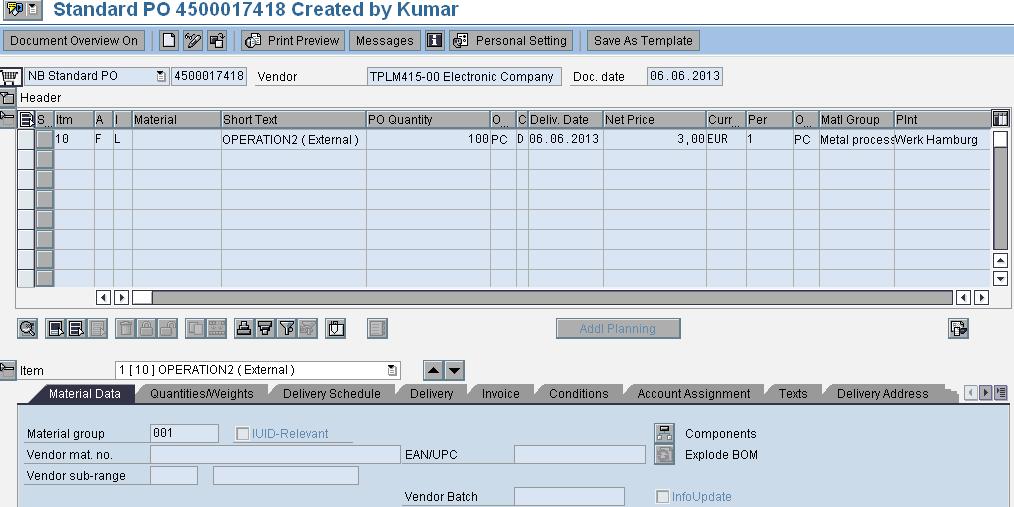 Now issue this component to the purchase order with movement type 541 through transaction MB1B as shown below. 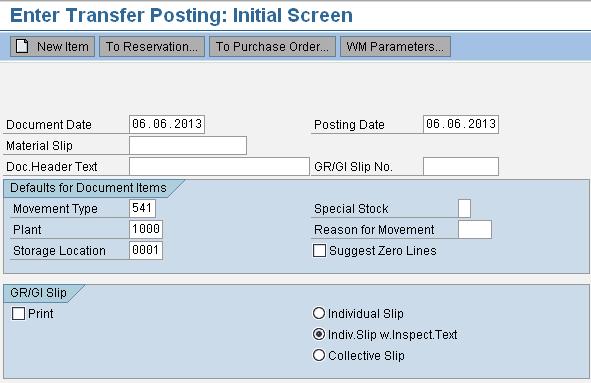 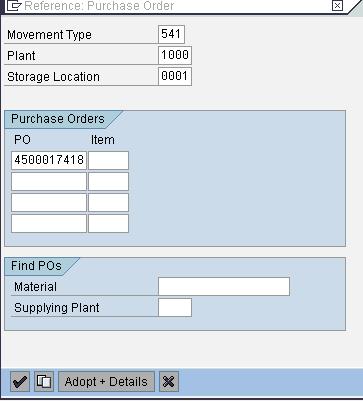 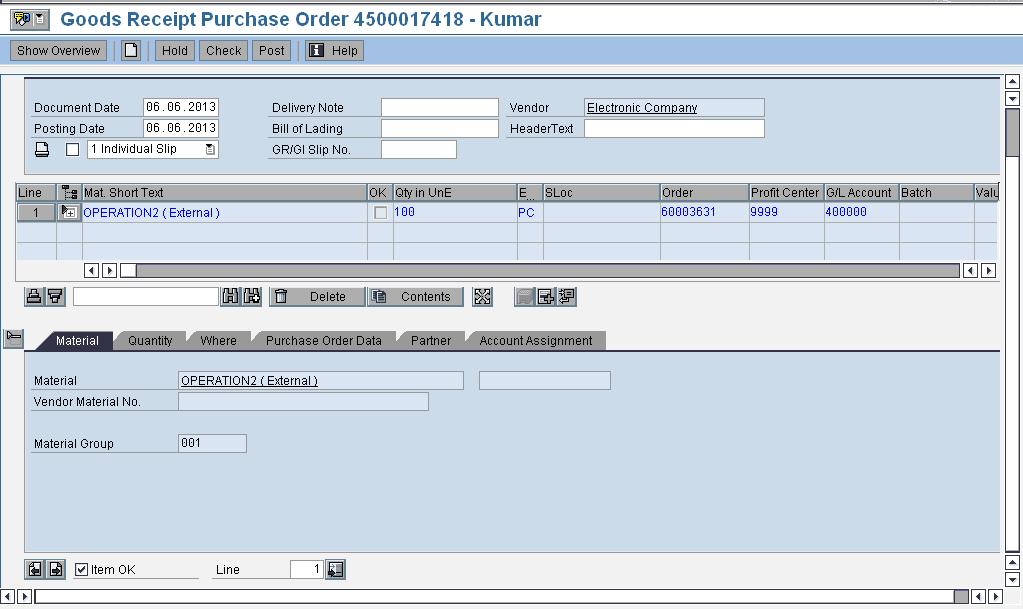 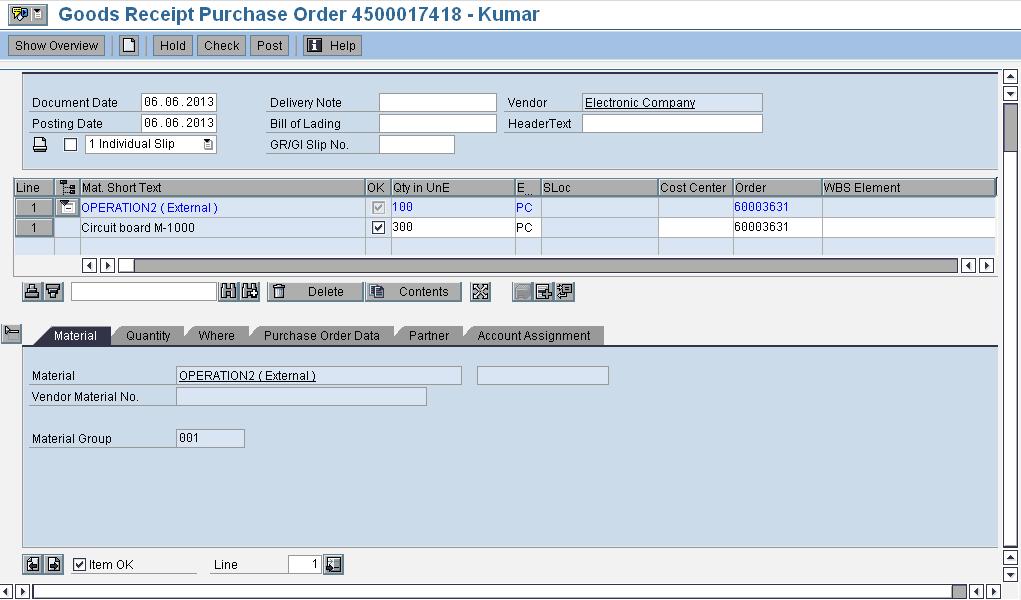 Now check for the stock of the second component in the stock overview and it is consumed.

No need to confirm the second operation (Now confirm the Second Operation in the Production Order). When you do GR against subcontract PO, system automatically will change the external operation status as “EODL” External Operation Delivered. Make the goods receipt for the production order through MB31. check the stock in mmbe

Do you mean , material which is output of operation 0010 & the component allocated to operation 0020 will be sent out to vendor?

or it will be only component allocated to operation 0020 ?

If you can include this information it will be more useful document.

Thanks for your compliment

Thanks for sharing knowledge....

Is there the provision to send the received Operation to quality check? how do i ensure that assigned job to vendor is successful completed before accepting again on my production line and releasing the payments.

You need to activate the relevant inspection type 0130 in the material master in QM view. If this is done when we make the GR for Purchase Order you will get inspection lot...

Thanks for sharing this to all. Points Awarded. 🙂

Thanks for your compliment...

Kumar(in IDES) and Consultants working in Release 605 and later, Just an observation to share if your MMBE screen display/layout looks as in the document screenshots with the Unrestricted use stock moving to the 3rd column.

Although there is no negative impact the layout has been affected.

These days are the days of enhancement packages and this error is because of an activated business function in 605 and other reasons for later releases.

For later versions look for the appropriate note.

Sorry for deviating from the topic.

Thanks for your feedback...

After that GR no raise the inspection lot in QA32, if any other t.code having this checking.

yes. It is possible. Check for any user exit. ABAP person can help you.

Hi--- I tried to run this scenario. I followed all steps as per document. but When i create a production order, purchase requistion is not creating in external processing tab. Please guide. Thanks

Also, you could maintain an Info record within the operation.

Many a times cos. want to send the material to an external vendor for say painting; finishing activity (any other value addition process). At that time, not necessary to have a PReq created with item category 'L'. It can be AA='F' and item category blank. You pay the vendor for the service only.

Thank you for this detailed guide.

We have a similar scenario in process industry and I have created the recipe same as explained by you.

However I am facing below issues:

In you example I see the components get assigned to the PR and PO, if the component has been allocated to the operation which is being externally processed.

Can you please let me know if there is any special setting which takes care of this? Do you create a BOM for the component provided to the vendor?

In my case for making FG 'A', component B is used. This component 'B' is subcontracted to the vendor for external processing. Vendor returns the material as component 'B' only. That is the sap material number remains the same.

2. in the BOM of FG 'A' for component 'B' I have set Material provision indicator as 'L' because if I do not do this, I am unable to convert the planned order to process order due to error 'movement type not specified for component B in production order customizing'

I have a question. If the material is already issued to production order, how would issue that to subcontractor? It is not available in inventory for doing transfer posting.

It is very details and very helpful to get understand the process.

I have a query here - how to process if i am sending my 1st operation's material to vendor for subcontracting to perform 2nd operation process without any component.