Last week SAP held this webcast to cover 2014 and beyond, where planning to go.

The usual legal disclaimer applies that planned and future features are subject to change.

They said they wanted to ,move from single version of truth to network of truth and bridge from IT to business.

Based on BI Platform, they are adding to agile visualization and advanced 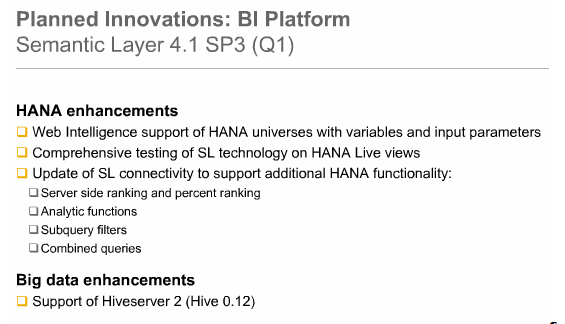 SP3 is planned for Q1, with mostly enhancements for HANA 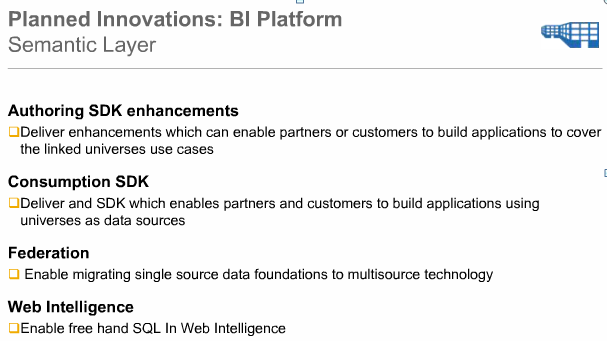 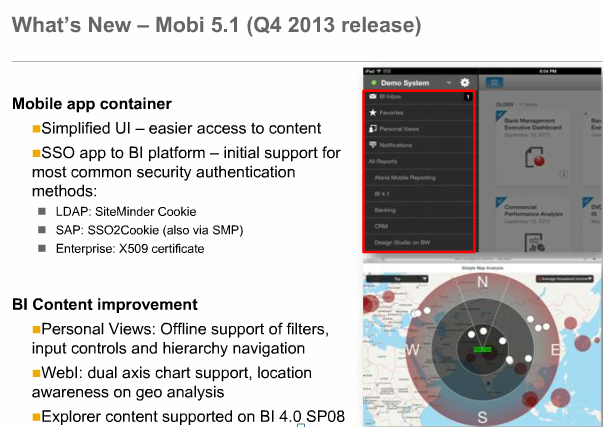 Mobile 5.0 was a big release – consistency and improvement in user experience, with consistent interaction and controls and LDAP, SMP, enterprise authentication 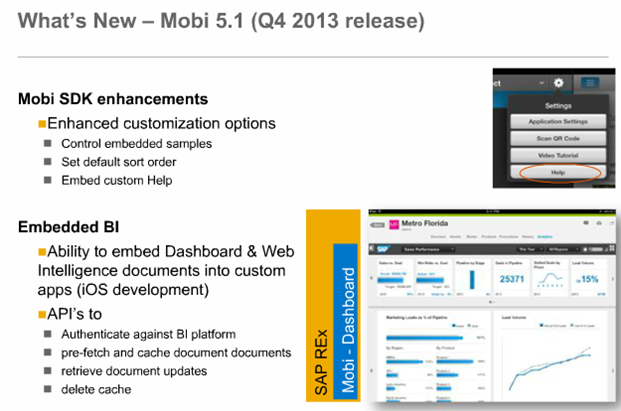 SAP said they would continue with offline support 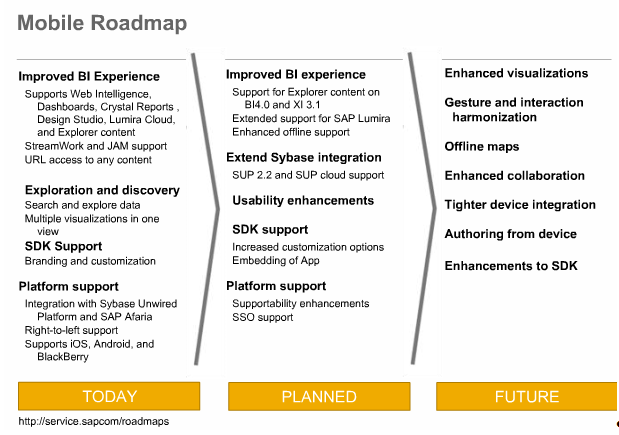 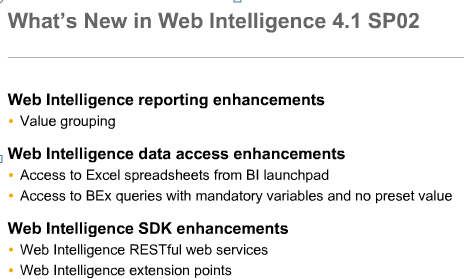 Figure 6 shows what is new in Web Intelligence, SP2, which was available on Friday, 11/22 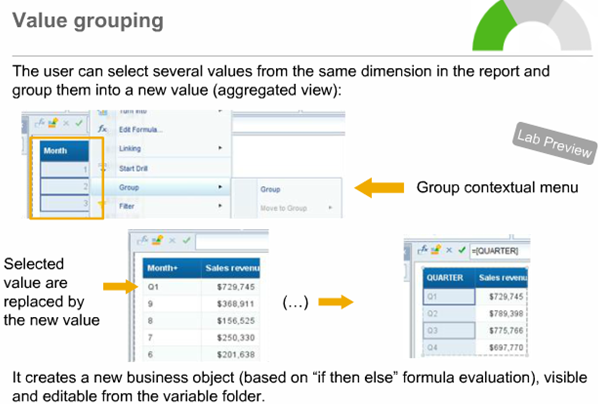 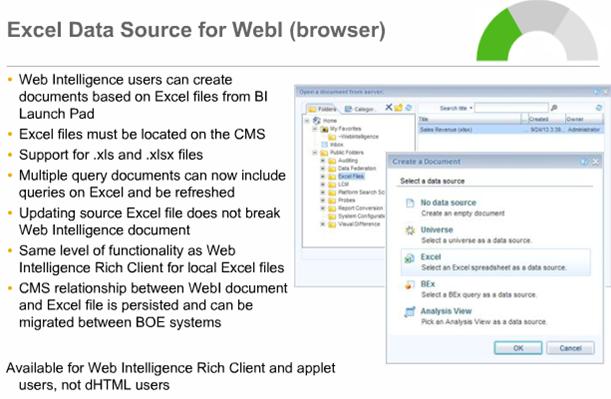 Excel as a data source was supported before WebI Rich Client 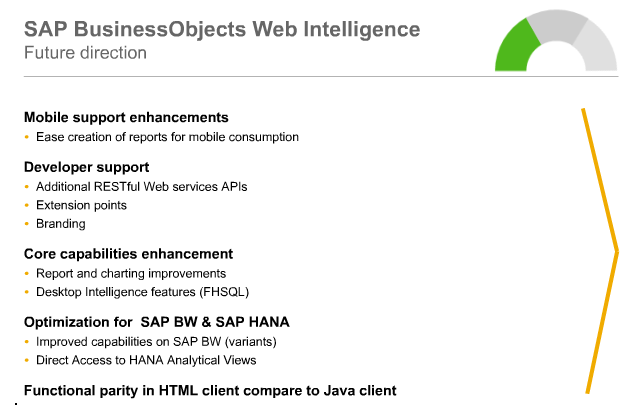 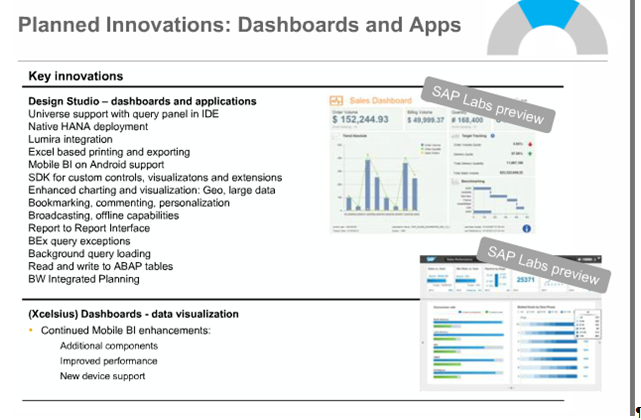 Figure 10 shows plans for Design Studio and Dashboards.  Some are in the recently GA Design Studio 1.2 release, others are planned for the future. 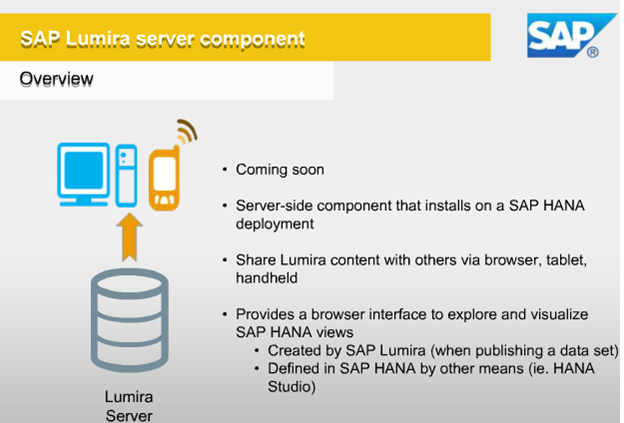 Planned in coming months Installs on HANA and looking at BI platform for future too. Lumira server on premise is coming 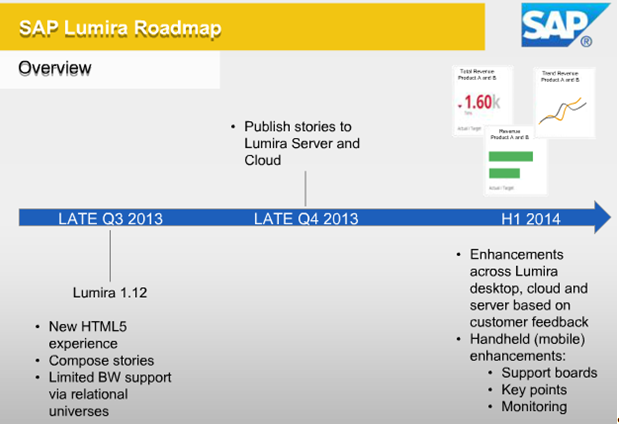 Figure 12 shows what is planned for Lumira, including publishing storyboards to the cloud, and handheld support.

Q: We use BI4 what is the migration effort to BI4.1

Q: Can we save the Lumira content to BI4.1 platform

A: Today you can save Lumira datasets to the platform and open those in Explorer.  Working on support for the stories to BI platform (see Figure 12)

Note this part of the webcast was only 20 minutes, so there is not much text to accompany the slides.

Thank you so much. lot of information. I have a question on using excel as data source for webi reports through launchpad. If the BOE platform is on Linux/Unix servers, Can we use excel as data source? Because, i have a similar requirement and the server is on linux, we need to make the webi report available for multiple users.

I recommend asking this question in the Web Intelligence discussion area - I am not using Linux and I don't know the answer.