It has been a while since my last blog about our platform, and I would like to take this opportunity to give you a final update for this year.  I would like to pre-announce the upgrade of the SCN platform.  This is a minor upgrade of the Jive system, and we will be going from the current version of 5.0.1 to 5.0.6.  This upgrade will take place starting Friday, November 29 @ 6 PM CET and will conclude on Monday, December 2 @ 8 AM CET.  During this time SCN will be offline.  Below I have summarized for you a list of changes you can expect.

When we launched SCN on the Jive platform back in March 2012, we introduced a concept called governed metadata properties.  These properties were available to all content items, and they were in addition to user tags.  We took this approach to provide a form of tag that was predefined by SAP in order to maintain consistency across the site.  Metadata values such as products, topics, and industries are important when classifying content.  While this technically functioned, most people did not use the feature as they preferred the user tags.  This feature also introduced a heavy customization to the platform.

So, earlier this year we decided to remove the customization in favor of functionality that comes out of the box.  In order to preserve the ability to provide pre-defined user tags, we created an extension to the user tag system which allows us to pre-define tags and to provide better control over the end user experience.  We call this new feature Managed Tags.  The screenshot below illustrates how this functions, and you will see the improvement we have made over the out of the box tagging feature. 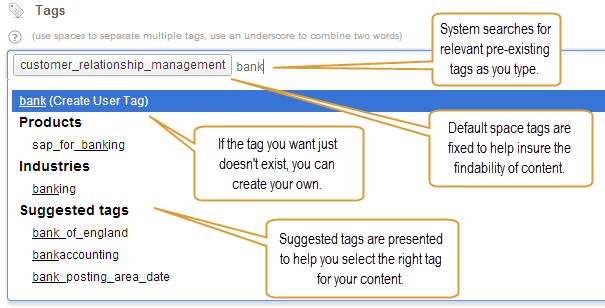 I would like to thank the beta testers, especially Tammy Powlas and Jürgen L for their assitance as beta testers.

What does this mean for you?  I really don’t know, but deep down I am hoping the system continues to get faster and more responsive with each upgrade.

A Plethora of Bug Fixes

In addition to the fixes described below, this release includes a number of significant improvements to resource usage and other performance improvements.  Note that these release notes are from Jive Software and do not necessarily reflect the environment on SCN.

Starting in January we will start to take a look at the latest release of the Jive platform version 7.  I can’t really go into details right now, but here are some of the new features you can expect to see:

Are there any changes made for writing blog posts/documents? Currently, if I click on the link, it's not doing anything. Can you guys please check once?

I think this is happening for everyone (including me)

I think we give it a few hours

Thanks Tammy. Now, its open the blog post but unable to insert images or upload them for the blog.

We are unable to insert images into the blog posts while creating/editing it since yesterday when the system is up. It seems the Insert image option is greyed out. Can you please have a look at it once.

Adithya K - For an update on this and other issues, visit the SCN Support space: http://scn.sap.com/community/support/content?query=images