Data Geek Challenge – Analyzing the world of cyberspace, factors that affect it

Data Geek Challenge – Analyzing the world of cyberspace, factors that affect it

Cyberspace is a realm of electronic communication. It is the virtual reality where online communication takes place over computer networks in every part of the world; millions of people are using it every minute and every second. But what I’m concerned about is the many questions online I came across pertaining to the factors of a country and how it affects cyberspace; however there was no definite answer to it.

In this blog, I will attempt to find out if there are factors that will affect the amount of cyberspace usage in the country.

So, let’s get started! For performing my analysis on which factors affect the country’s cyberspace usage, I have selected the top 5 countries with the highest percentage of internet users which are:
Iceland, Norway, Netherland, Sweden and Luxembourg.

And the bottom 5 countries with the lowest percentage of internet users which are:

I’ve decided to research on 4 major factors that may affect a country’s cyberspace usage. Without further hesitation, let’s get started with the first factor

1. Education Level
Education is a major component of well-being and is used in the measure of economic development and quality of life, which is a key factor determining    whether a country is a developed, developing, or underdeveloped nation. 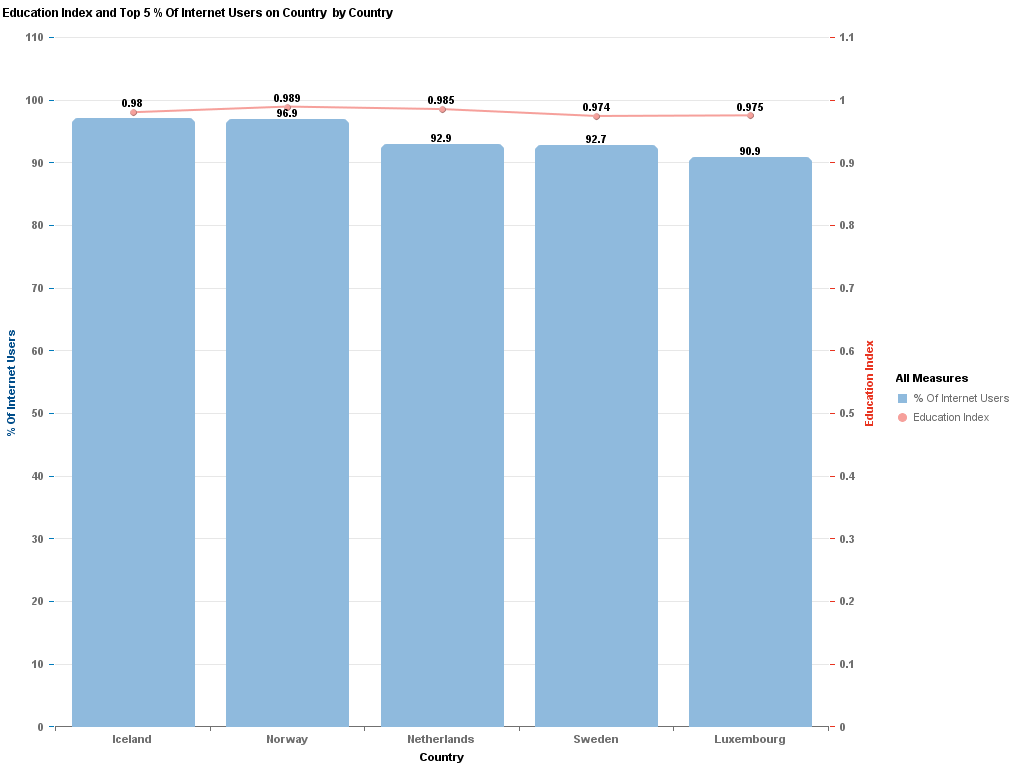 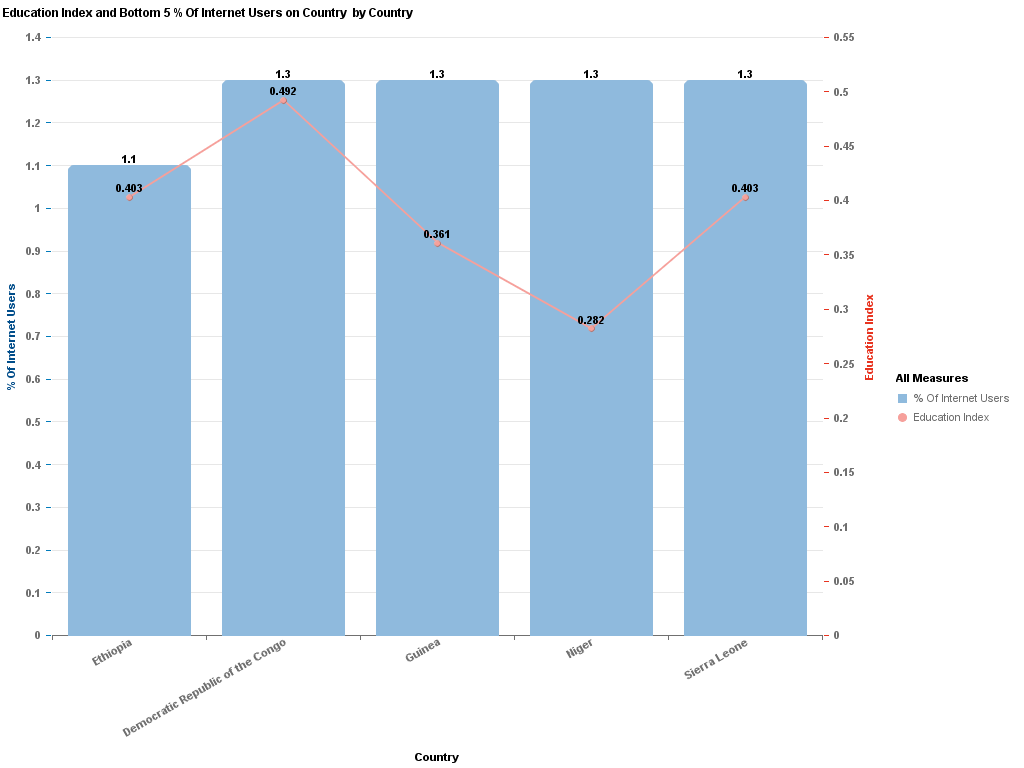 Let us consider that education is one of the major factors, what other factors play a role in a country’s cyberspace usage?

Next, let’s take a look at a country’s economy and see whether it plays a significant role. GDP per capita is one of the primary indicators of a country’s economic performance. It is calculated by either adding up everyone’s income during the period or by adding the value of all final goods and services produced in the country during the year. GDP per Capita is sometimes used as an indicator of standard of living as well, with higher GDP per Capita being interpreted as having a higher standard of living. 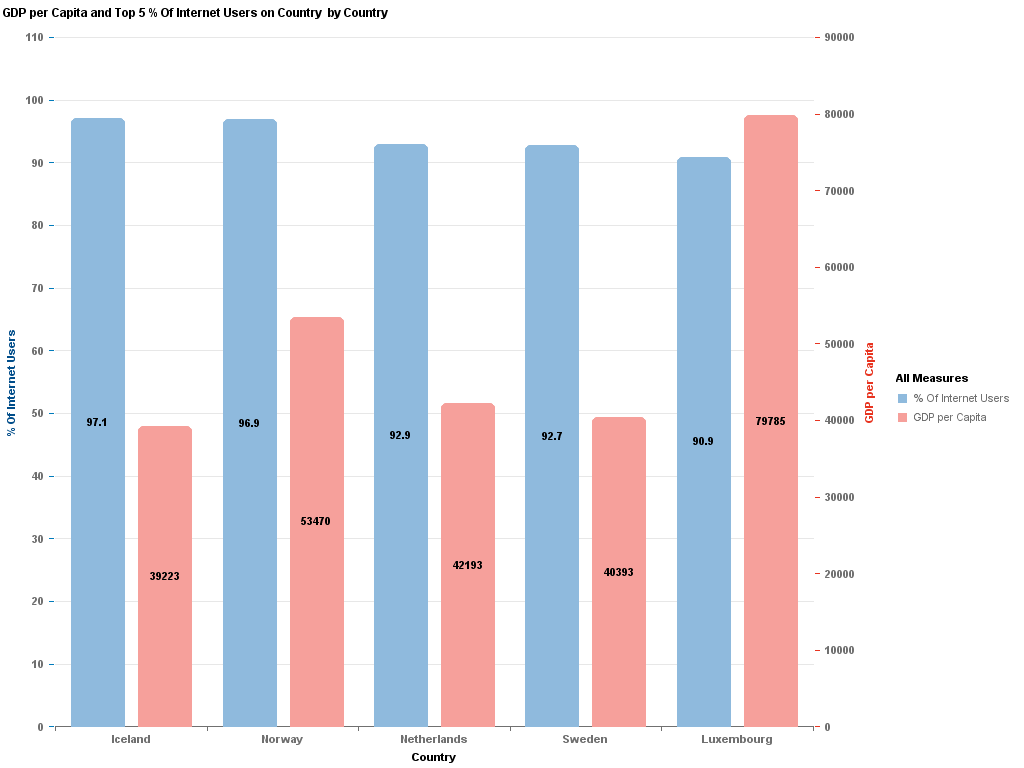 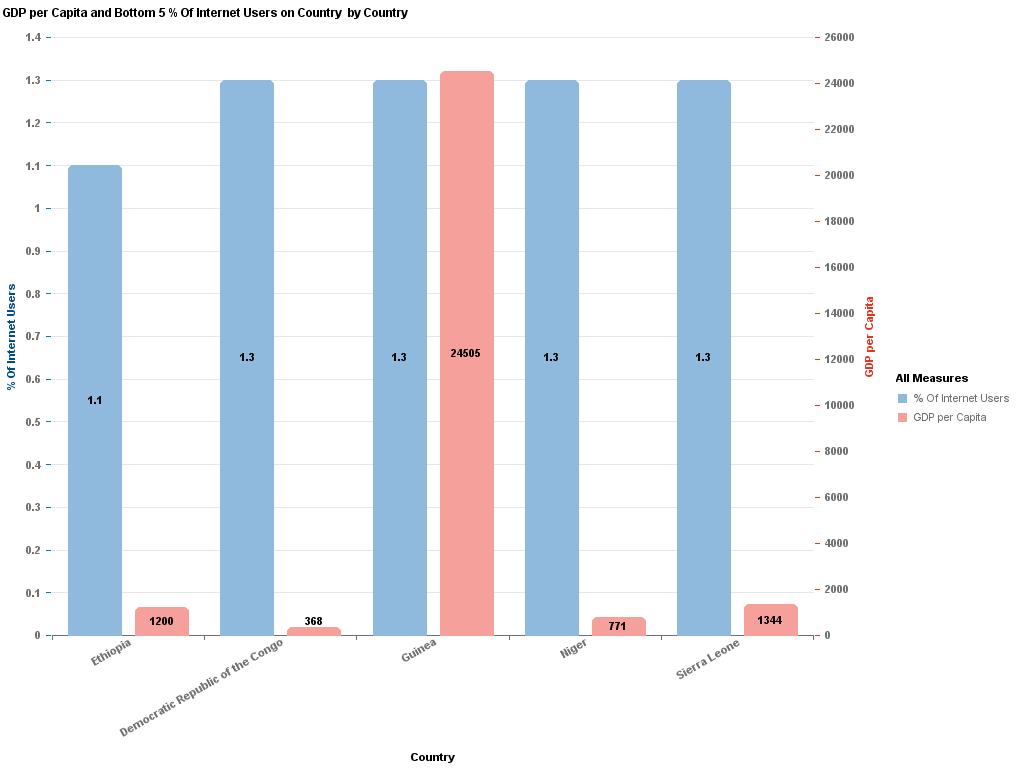 As we can see, among the top 5 countries with the most internet users, there is a huge difference in their GDP per Capita. Thus, we can agree only to a certain extent that GDP does play a part in the percentage of internet users.

With that said, let’s move on to population. It is said that you can’t build a country without its population. So let’s take a look and see if a country population affects the percentage of internet users. Population is the total number of people inhabiting in a specific country. A country’s people are like gears for a machine. In order for the machine (country) to progress, a country’s population has a huge impact on the country’s growth. 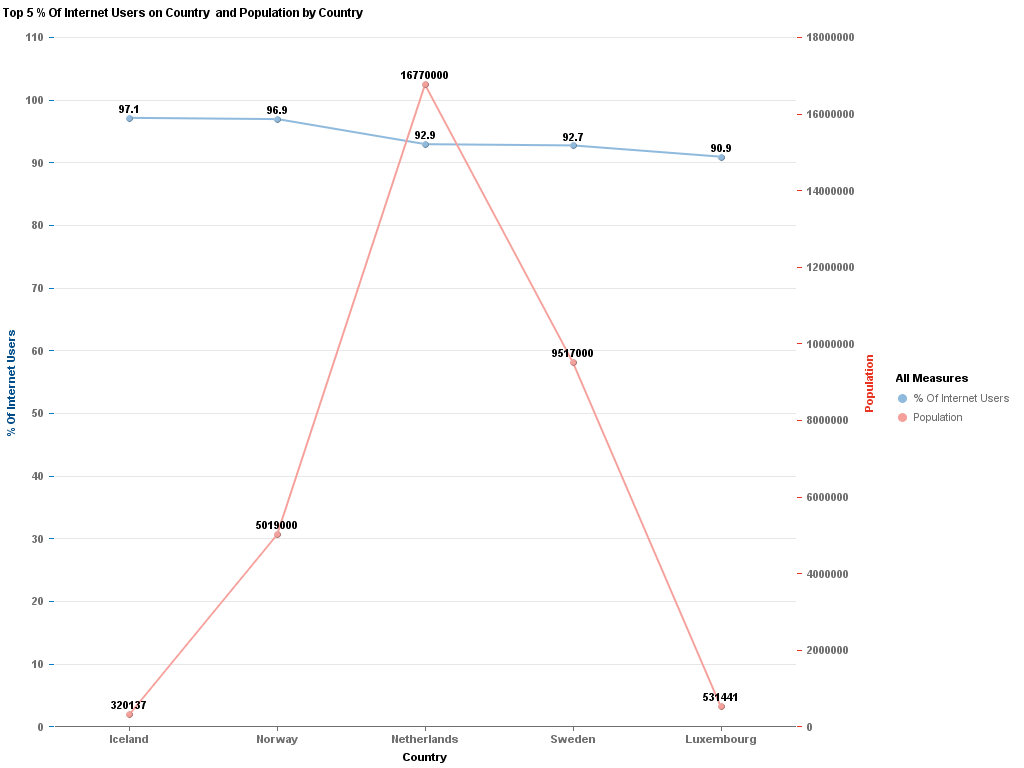 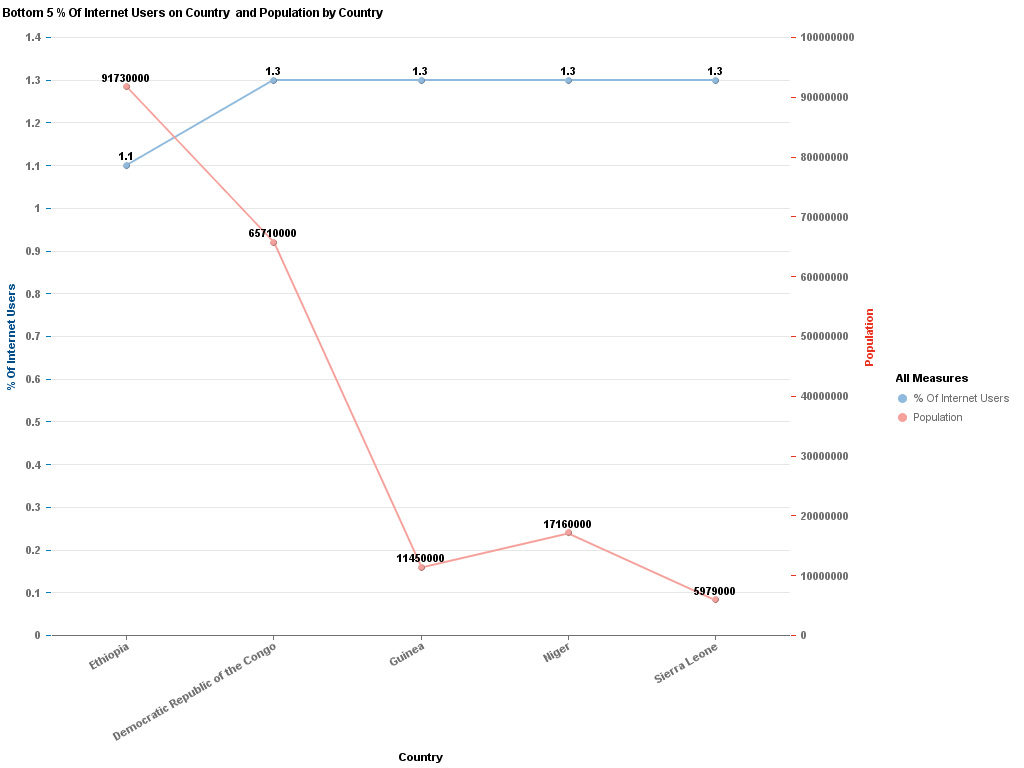 The results were unbelievable! I’m surprised that having a larger population does not result in a higher percentage of internet users.

Would the size of the country be a factor for a higher percentage of internet users?

The size of a country comprises all land and inland water bodies (lakes, reservoirs, river) of a country. The idea is that countries with a larger physical territory are more self-sufficient than smaller countries. Because of a greater territory, the potential access to natural resources and other foundation are higher thus a better economic growth. 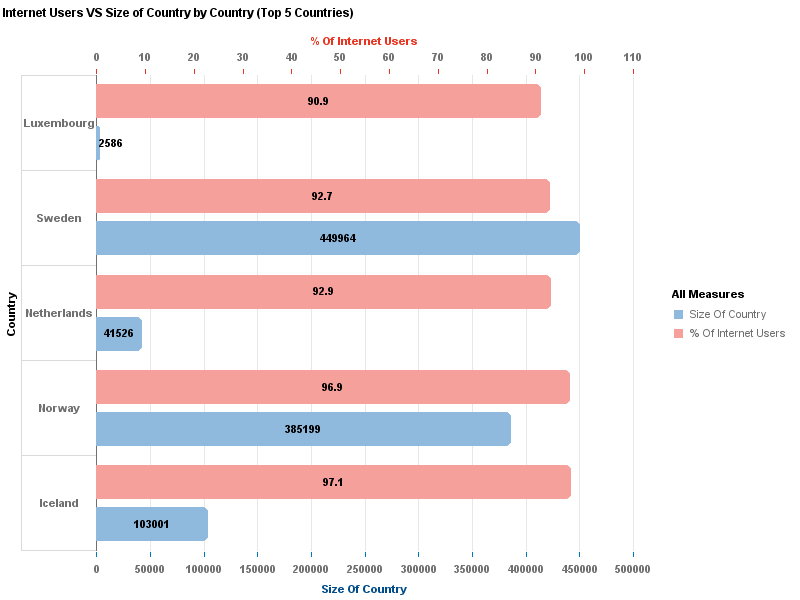 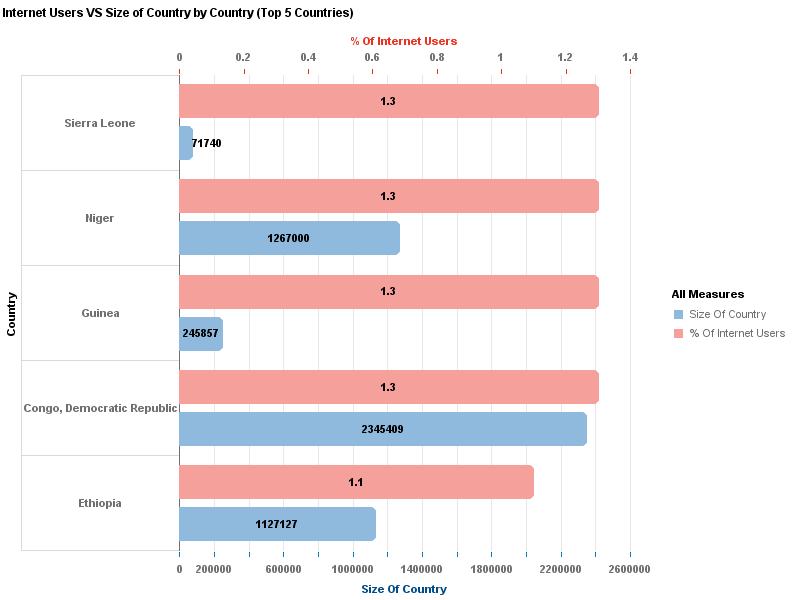 In this blog, I have tried analyzing the different factors that affect the percentage of internet users. While performing my analysis I realized another factor I would like to explore which is the total monthly internet views against internet users of a country.

Total monthly internet views refer to the total number of people who use the internet to perform tasks such as browsing of internet, communication, etc.

For performing my analysis, I have selected the top 5 countries with the highest number of internet users which are:
China, United States of America, India, Japan and Brazil 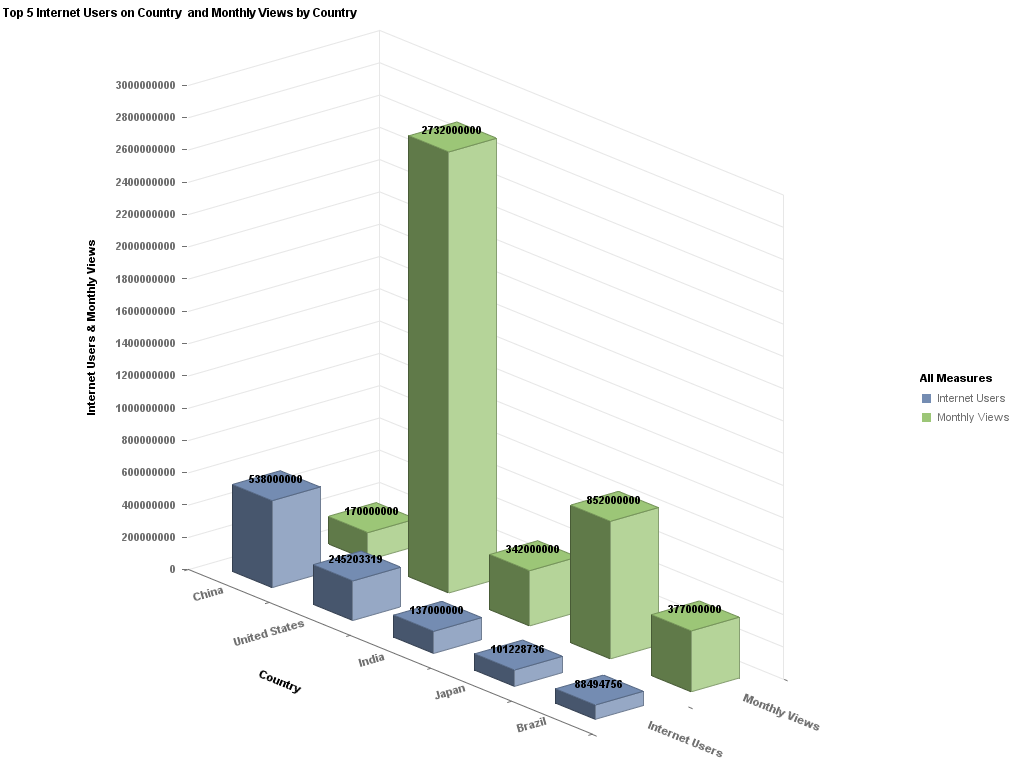