Before buying a new vehicle, potential vehicle owners in Singapore are required by the Land Transport Authority (LTA) to first place a monetary bid for a Certificate of Entitlement (COE). You will need a COE if you wish to register a brand new car in Singapore. COE quota is set by the Land Transport Authority (LTA) for the purpose of regulating & controlling the numbers of new cars on Singapore roads so as to avoid over-population of cars. The COE is the quota license received from a successful winning bid in an open bid uniform price auction which grants the legal right of the holder to register, own and use a vehicle in Singapore for a period of 10 years.

COEs comes in five categories. A, B, C, D, E respectively. The categories are sub-divided according to the capacity of the car.

*CAT E COEs are transferable and can be used for any kind of vehicle and capacity, unlike CAT A and B.*

The price of COEs is determined by open bidding from public which is held on every first and third week of the month. An individual or company can submit a bid via ATM or online for an amount they want to bid; the end results will be the amount tendered by the lowest successful bidder.

Scenario:
John is a young working adult who wants to buy a new car. He wants to know what are the trends for COE prices to determine if there’s a best time to buy a car. He also wants to predict the likely COE prices in the near future.

Let’s start off with finding out the average price for COE for the different categories in the past 4 years (including this year).

Note: The numbers below are all in SGD (Singapore dollars) 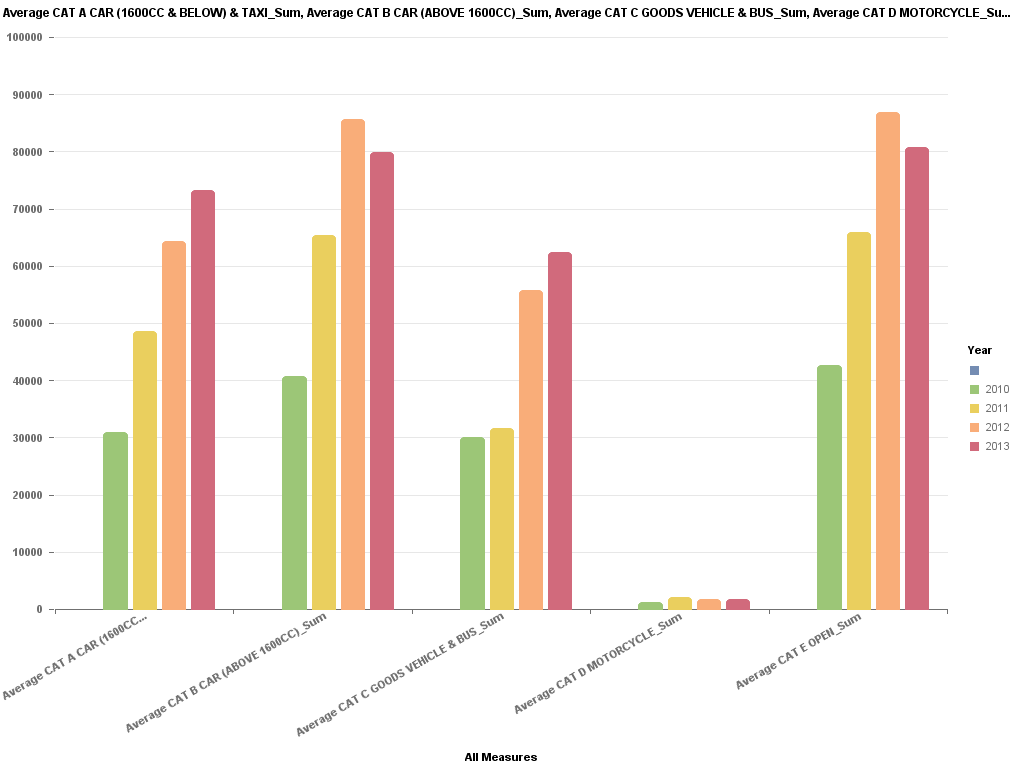 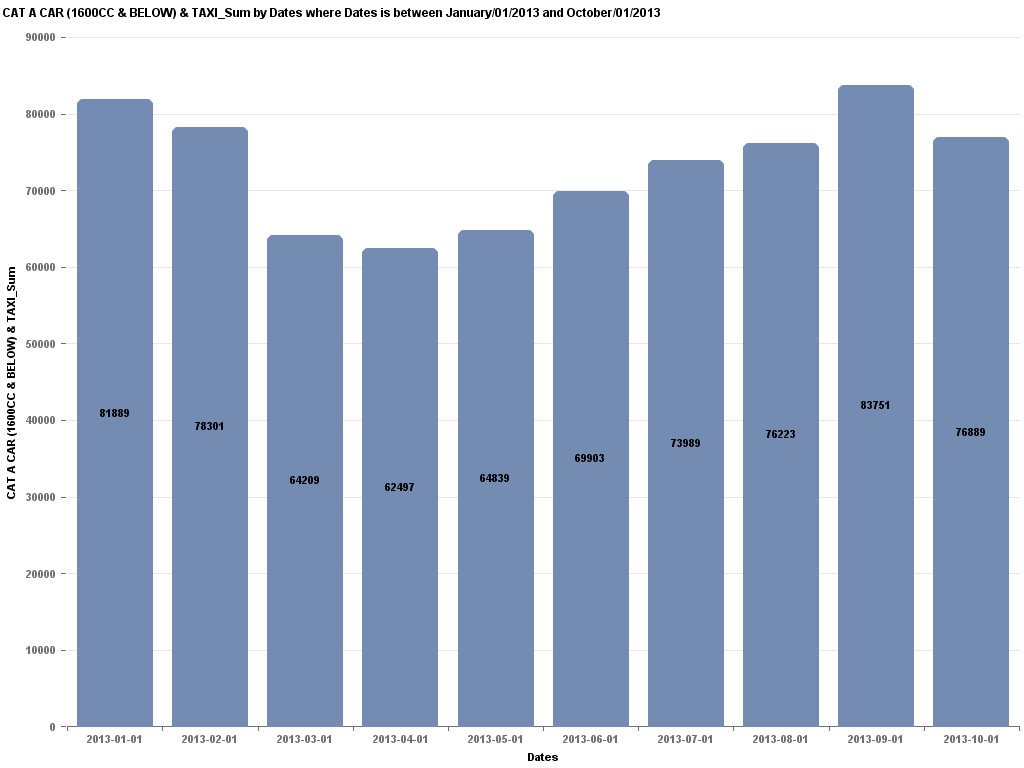 Well, the average price for COE CAT A is around $73000SGD. However, as you can see from the chart, the COE prices are not increasing from January to December. For example, in January and September of 2013, the prices exceed $80000SGD, while in the months of March, April, May and June, the prices are below $70000SGD. There is a huge difference in the COE prices across all the months in 2013, so what factors play a part in this change? Let’s take a look at one of the factor which is the bid quota of every month and the number of people who bid on that month. 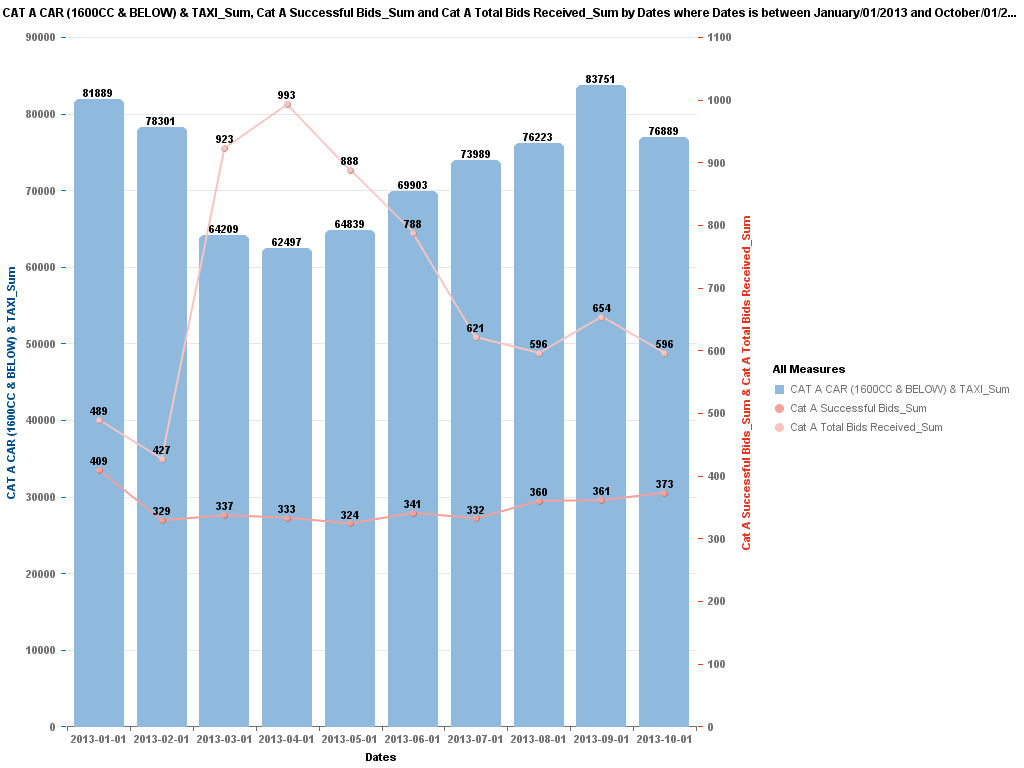 It looks like the more the number of people that place a bid, the lower the COE price. This seems rather strange but a possible explanation could be that people have the thought that during the duration between March to May, the COE price will be lower, hence there are more people bidding. This could be one of the reason why the number of bidders is so high but the price is so low or perhaps the number of bids is not a factor that affects the COE price.

Another possible factor which may affect COE prices could be the economy. If the economic outlook becomes less rosy in 2013, this could also dampen demand for cars. Historically there has usually been a slight correlation between equity and COE prices. If the share market booms, buyers are more willing to pay high COE prices. Education could be another factor, when people are more highly educated they may earn more and be able to afford a car.

Now let’s take the trend of the past 4 years to make a prediction of the price of COE for the year ahead.

To create this predictive model, we select R-Triple Exponential Smoothing from the “Time Series” as this will allow us to have “Months” as Period as compared to the other algorithms.

Now let’s start off with creating a chart based on the trend of CAT A from January 2010 till October 2013. 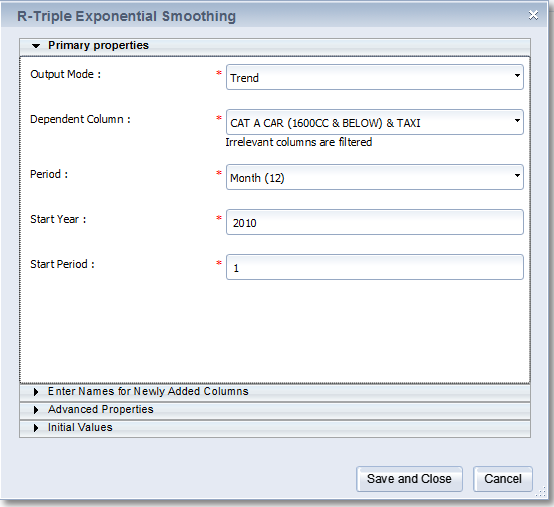 Save and close. Hover over to the algorithm and select “Run Analysis”. 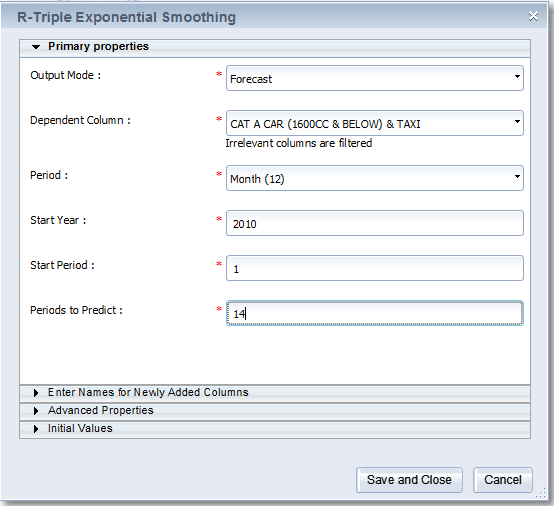 If we change the Output Mode from Trend to Forecast, we get an extra parameter “Periods to Predict”. The periods to predict refers to how far you want to predict. In this case it would be 14 as we would like to know the prediction of the price of COE for the next 14 months

This predictive model has foreseen that the price of COE will continue to increase. The result shows that the COE will increase all the way to over $100,000SGD in the year 2014.

Conclusion:
After looking at the trend and prediction using SAP Predictive Analysis, John has decided to make a bid to purchase the COE in early 2014, before the price of COE increases to over $100,000.

It seems that you've found a great way to visualize a predictive model to assist with investment options. A real world application.

Have you done anything with Predictive Analysis to help you with any decisions yourself, yet?