As far as I know test isolation is widely used in SAP internal to build unit test code, at least in my team. Test isolation in unit test means that in your production code you make use of some API(class method/Function module) which are developed by other team, and you would not like to really consume them during your unit test, since you would not accept that most red lights in your unit test report are caused by the bugs in those external API,right? Instead, you expect that the call of those external API during your unit test execution will be replaced by some dummy code written by yourself.

I will show you four different ways to achieve that.

The example comes from one productive class in my project. For simplicity reasons I don’t list unrelevant code here. The class is ZCL_DESTRUCTION_IMG_TOOL_S1.

The main logic is doing a cleanup work: loop every work list item, check whether it has some dependent object. If so, delete it.

The worklist is just hard-coded:

The reason why test isolation is used in our unit test is because in method dependent_object_existed, we call an API provided by another team, and we don’t want that API to be really executed during our unit test execution. For demonstration reason, I use the following code to simulate the production code.

It means during the unit test on this class, the following code is NOT expected to be executed at all.

And the code for method start:

In this approach, actually the class being unit test are not lcl_destruction_test, instead of the original class ZCL_DESTRUCTION_IMG_TOOL_S1. 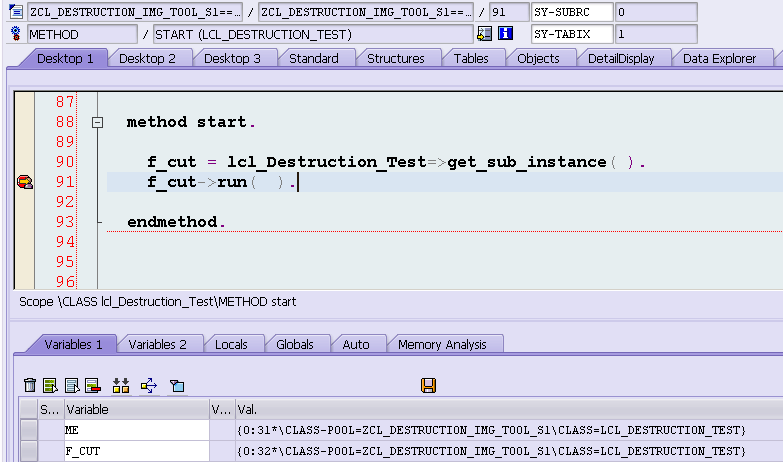 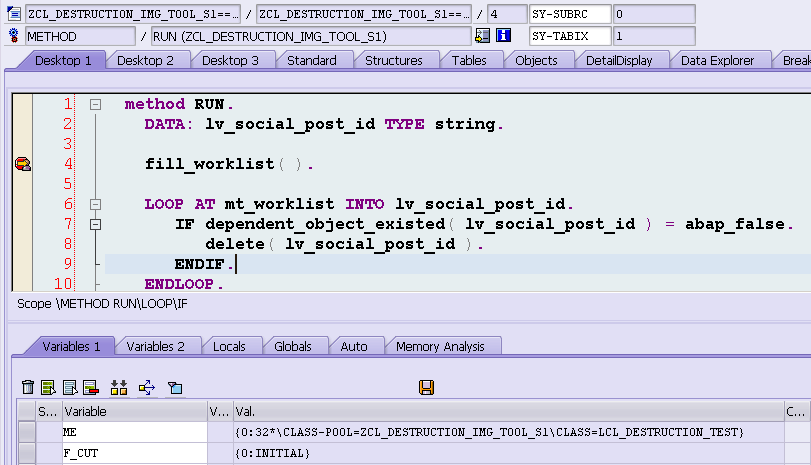 And when execution comes into method dependent_object_existed,since currently “me” points to the local test sub class, so the mock code will be executed, which is just what we expected.

The limitation of this approach is, if the author of class ZCL_DESTRUCTION_IMG_TOOL_S1 insists on that it should be defined as final, it is impossible to define any sub class of it.

2. Create a local class to implement the productive logic of dependency detection as usual:

4. In method run, if no reference is passed in for io_dep_obj_detector, the default one for production use will be called (line5).If there is indeed one dependent object detector passed in, use that one. (line7)

Also the previous method dependent_object_existed is removed; the interface method call is used instead.

Now the possibility is given for consumers to provide their own dependency determination logic by implementing interface and filling the optional parameter of method run; however this is not what we expected in the beginning.

Signature of method run is changed, which is a non-critical change. (Adding a new optional method parameter is not an incompatible change)

In my opinion it could not be regarded as a 100% test isolation solution.

Interface extraction is also necessary for this solution.

1. Create a local class to implement the productive logic of dependency detection just the same as approach2.

3. Initialize the detector instance according to its name maintained in member attribute mv_detector_type_name.

Since its default value is the local class LCL_PROD_DEP_DETECTOR, so in the runtime the productive detection logic will be called.

In the unit test code, just add one line( line 62 ). Now the detection logic redefined in unit test class will be called.

Approach3 is superior compared with approach2 in that no method signature change is required. Class consumer will have no chance to pass their own detection logic into class in a normal way. However, a new class member attribute is introduced, which could be not necessary in the next approach 4.

Similar with approach 3 to some degree.

5. In unit test code, replace the instance of dependency detector with unit test class reference itself, so that our own logic would be called in unit test:

No new attribute or method interface change is required in this solution. This solution should be used for test isolation whenever possible.

You can find the source code of these four approaches from here.

This is very interesting.

Have you had a look at the ABAP unit mocking framework MOCKA being developed as an open source project by Uwe Kunath?

I would be interested in your thoughts on this.

It is good that so many people are thinking about the easiest / fast / best way to do unit tests. Mind you, I have a horrible feeling the vast majority of ABAP programmers don;t even know what a Unit Test is.

i have tried to explain it to my colleaguse at my company and they look at me like I am mad.

I will try that soon. Thank you for your notification. At least in my team we follow the test drive development style.

For the first seven years I was an accountatnt - then along came SAP and all around the world I went.

The funny thing is, constructor injection can serve two purposes at once. The obvious one is unit tests, but the other example I have encountered is thus,

You have a class where you pass in the database access layer as an optional parameter in the constructor. In real life nothing is passed in, the real database access object is used. In my unt test I pass in a mock object.

Now, the user requirements change - shock - as well as doing the business logic based on what is actually in the database, they want a simulation option where they want to know what woud happen if the contents of the database were different.

Do i have to re-write everything? No, I just give them an input screen to enter their "what-if" values, and pass those in as an object wit the same interface as the original database class. I don;t need to change a line of the original method, the good old "open-closed" principla would be dancing with joy.

I am doing such a thing right now in my real job.

Does that make any sense?

Good read. I've been using dependency injection for some time now to control which web services are used by a custom transaction. I was always planning on applying a similar strategy to help with unit testing and after reading through approaches 3 & 4 it appears to be a good idea.

Actually what you are concluding could be how to inject test double to production code. The Class type name give me another view of injection although it's not necessary as you said but it's a good try. Just want to notify there is still a "Setter" injection way for your choice. It's really simple that keep constructor clean and use set_XXXX method to inject the doubles.

I think the first approach (subclass and override) is a relatively painless way of making legacy code testable so it's definitely useful.

For new stuff something along the lines of approach 4 seems to be the way to go because it forces you into better design, ie. creating a lot of small classes with clear responsibilities (separation of concerns).

In my opinion constructor injection is _generally_ better than field injection because it makes dependencies explicit and doesn't hide them. Of course this requires the interfaces to be global. Then you could delegate the creation of the class to a factory that sets up the dependencies and wires them together to create your object. (Again, separation of concerns.)