I was hearing about SAP Lumira from my customers, and they were asking me questions about it for awhile. I played with a demo data set a little bit and I was amazed that the tool is very easy to learn and create visualizations.

However, I saw some lacking features in the tool especially data sources. I was expecting to see SAP NetWeaver BW connection, but it wasn’t there. I am sure SAP will eventually integrate this tool with SAP BW as well considering many of SAP customers using BW instead of SQL databases. In the meantime, it is possible to connect BW InfoProviders with multi-source universes which can be consumed by Lumira. It might also be good idea to add bullet charts to this tool which could be used to visualize performance.

When I was reading SAP Lumira section on SCN, I saw this Data Geek Challenge. I decided to accept it.

For this challenge, I wanted to use Arms Imports and Exports data set from the World Bank. I aimed to use this data because there is so many conflicts around the World going on right at this moment and the governments are spending so much money on arms instead of using this money on education, health, food, housing and so many basic needs of the people.

About the data set:

The data set is arms imports and exports starting from 1960 to 2010. Arms transfers cover the supply of military weapons through sales, aid, gifts, and those made through manufacturing licenses. Data cover major conventional weapons such as aircraft, armored vehicles, artillery, radar systems, missiles, and ships designed for military use. Excluded are transfers of other military equipment such as small arms and light weapons, trucks, small artillery, ammunition, support equipment, technology transfers, and other services.

When looked carefully to the chart, it is possible to see that imports and exports are at the top in the 80s which would be the cause of Cold War. As it is seen that in the 90s this dropped.

2. Exports and Imports by Years 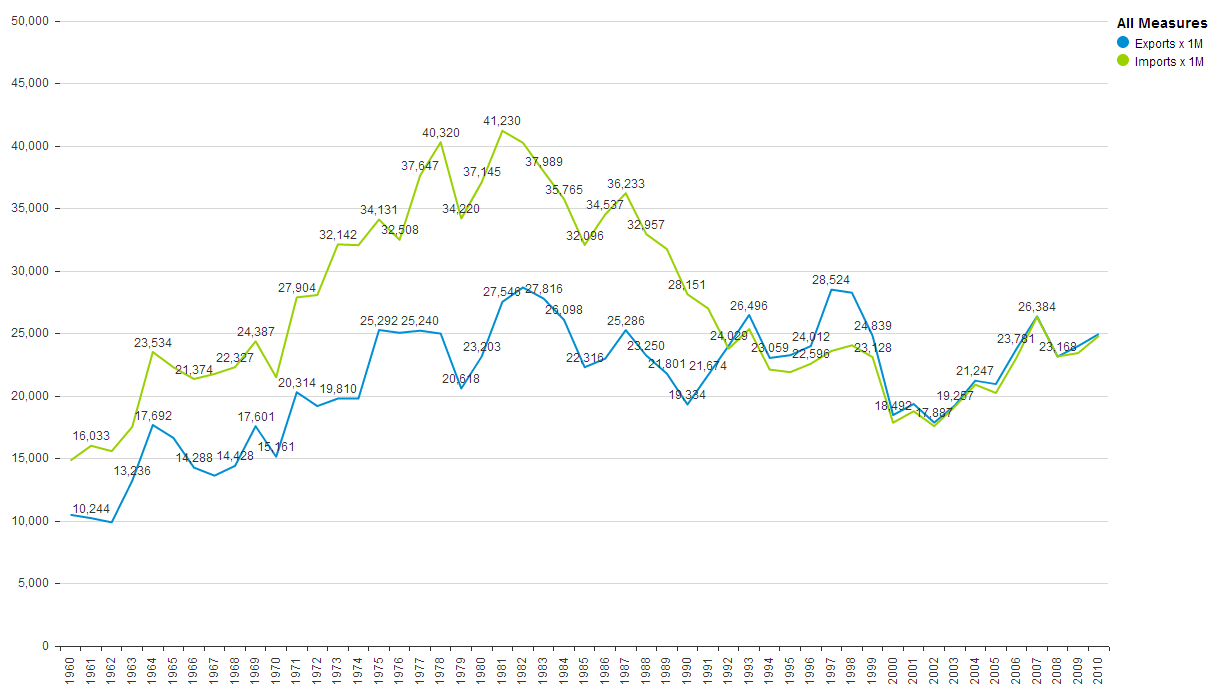 This charts shows arms imports and exports by year for Turkey. Turkey mostly depends on imports for arms. Imports hit the top in 1998, but after that it dorpped sharply especially in 2001. The reason in 2001 would probably be the financial crisis in Turkey.

I also wanted to see Iraqi imports. It was interesting because of Gulf War I in 1990, Iraq was imposed by sanctions by the US until 2003 Gulf War II. 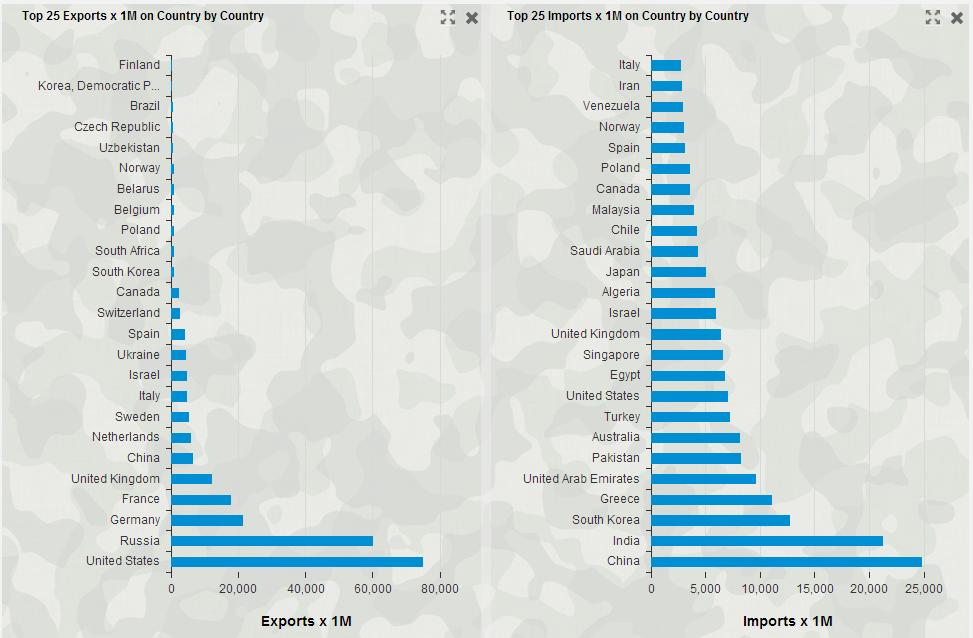 The data was filtered years between 2000 and 2010. The United States, Russia, and Germany are the top 3 of exporters of arms. China, India and South Korea are the top 3 importers of arms. It was really interesting to see Greece being the number 4 importer because right now they are struggling with financial crisis. 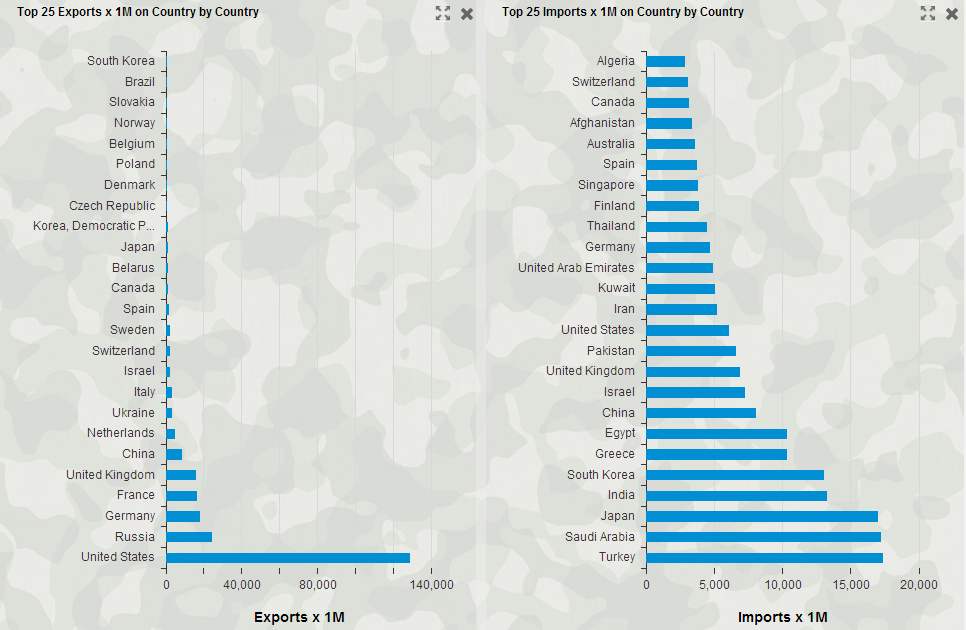 However, in the 90s, the United States was the top one exporter by so far. Russia in 2000s caught up with the US. Also, Turkey was the top one importer of arms in the 90s. There were conflicts in southeastern Turkey in the 90s which ended in 1999. After the end of the conflicts, financial crisis is followed. It is not the major reason for crisis, but Turkey spent 17.3 billion dollars in the 90s for arms.

4. Imports & Exports in the World 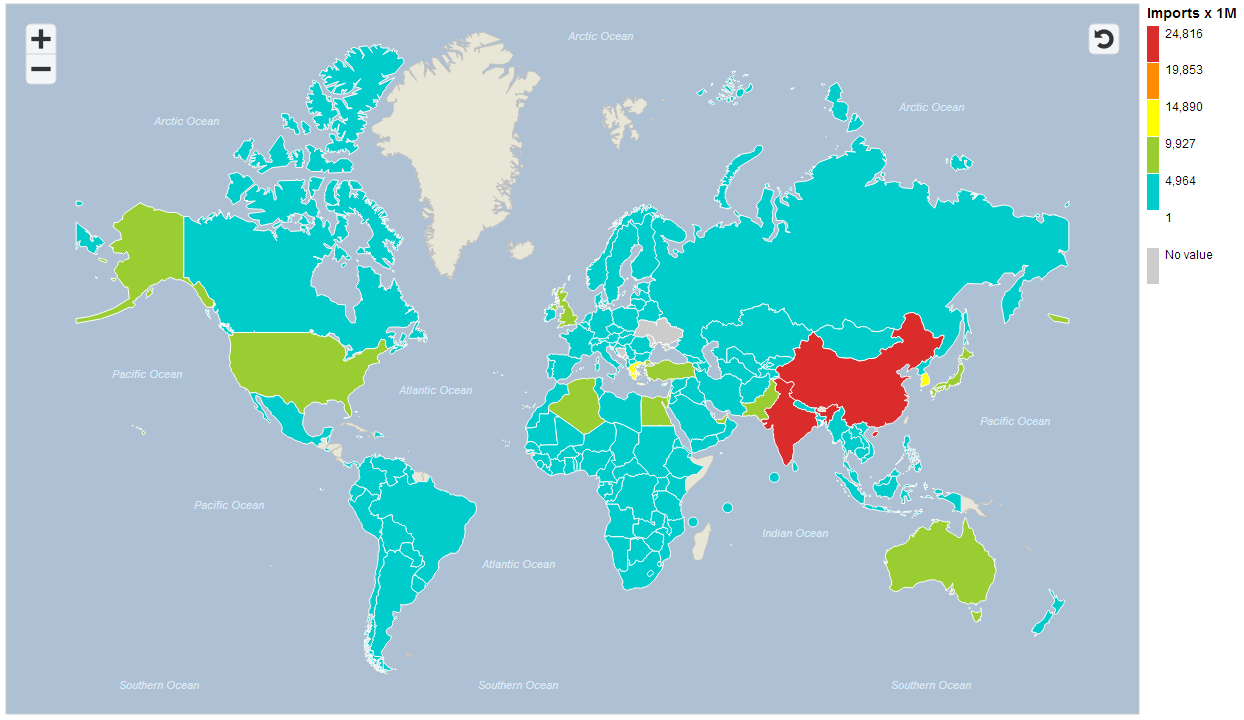 China and India imports the most arms in the world. 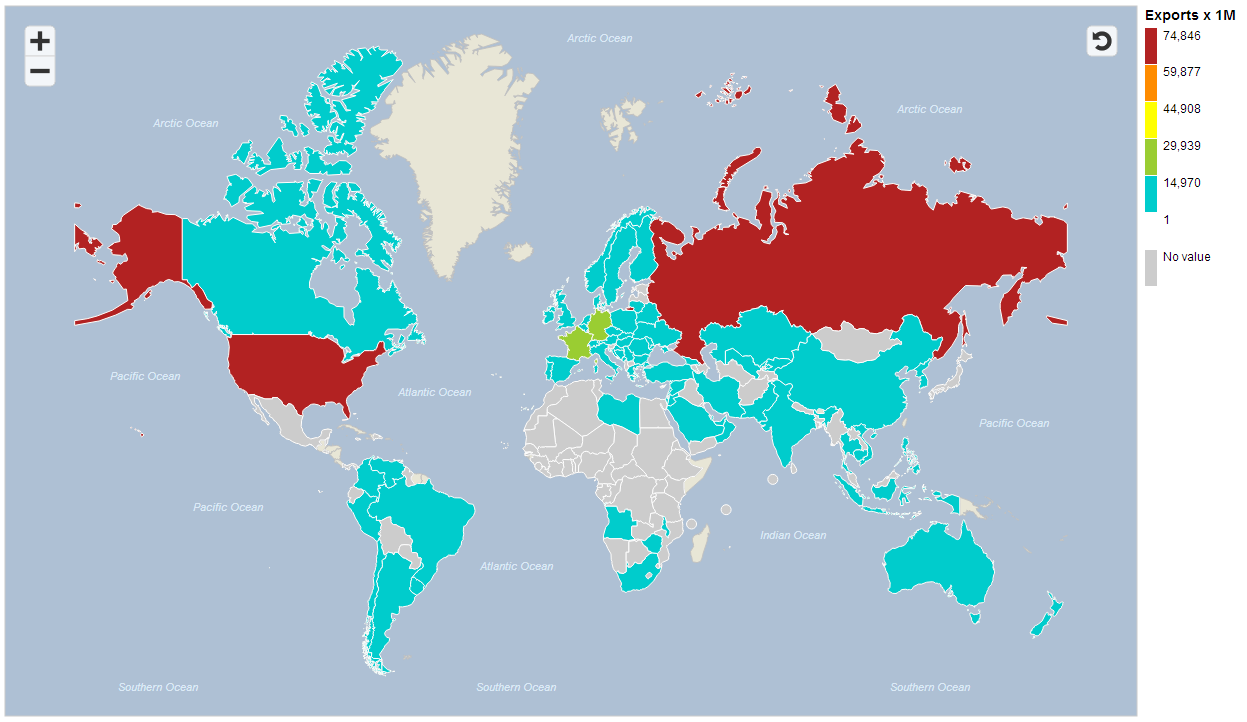 Russia and the United States are the top 2 exporters in the World.

There are 842 million people in the World do not have access to enough food to eat.

Nearly one in four people, 1.3 billion – a majority of humanity – live on less than $1 per day, while the world’s 358 billionaires have assets exceeding the combined annual incomes of countries with 45 percent of the world’s people. UNICEF

To satisfy the world’s sanitation and food requirements would cost only US$13 billion– what the people of the United States and the European Union spend on perfume each year.

At last, countries spend $24.9 billion just to buy arms in the World in 2010 alone. This money could be used to benefit people around the world. It could be used for housing, food, health, education, and so many other things.

You can also check

great in-depth analysis centered around an important, global issue! Thank you for the suggestions you posed regarding connectivity and Lumira. Many connectivity plans have been established and will become available with future releases.

In the meantime, feel free to post any other suggestions about features you would like to see added to Lumira here.

It's an interesting conclusion that you draw about how we can, in our current states, apply the moneys used for National Defense, International Security, and albeit "Gun Fun" towards housing, food, health, education and so many other things...

I wonder if there is a way to create a correlation and draw a separate conclusion about if we do, how the money can be used, and if there are any current cases already in existence.

I enjoyed walking through your discovery of Lumira, and hope that it was as simple to use as we have seen by others.

We look forward to many great presentations and questions from you and your clients!