Quite often we come across such cumbersome enhancement implementations at various customer sites that are not only difficult to support but has very little or no reusability at all across the development landscape. The source code behind these enhancements continue to grow from bad to worse over time as the business continues to request changes to these objects frequently as the business itself grows and evolves; to a point where it becomes simply a nightmare to support these objects not only from the development perspective but also from the testing standpoint, for example, to perform regression testing of all the existing functionalities when a current enhancement is extended and it results in change of behaviour of the enhancement in regards to the current business processes.

The objective of this blog is to demonstrate a simplified approach to implement custom enhancements by leveraging the powerful features of the new Enhancement framework together with the Switch framework that is well integrated into each other.

Let us take an example of a classical User Exit (UE) component in the HR module PBAS0001 and its most common implementation at customer sites. Those unfamiliar with this particular UE – Two Function/Exit Modules are provided by SAP to the customers one to default values at PBO and the other to check values at PAI at the time of HR Infotype master data maintenance via its related transactions.

The Drawbacks of this Model

The (much) Better Approach

“Converting” classic UEs (and classic BAdIs) implementation to call custom Kernel BAdI implementations to leverage the power of the Switch Framework that is so well integrated within the new Enhancement Framework. This not only simplifies all the enhancement implementations but provides a structured development approach that is bound to add a lot of value to the SAP landscape in the long run.

Example of a Custom Kernel BAdI with Switchable Enhancement Implementations

In our example, we will convert, simplify, integrate and structure the Classical UE/CMOD implementation PBAS0001 into the new Enhancement Framework. In our sequence of building blocks, we will first build the objects related to the Switch framework followed by the objects in the Enhancement framework to make it easier for the audience to understand the building flow and the integration between these two frameworks.

Business Function ZHR_BF_PA_MD_UE consists of 5 Switches which are required to control our New custom BAdI implementations.

Our BF is also assigned to a Business Function Set – which does not hold much context to our current demonstration but its good to know that every BF needs an asignment to a BFS to complete the SFW hierarchy.

Linkage between Switches and Packages

The table below contains the details of the Switches along with their individual Package Assignments and activation status.

Confirmation that the Business Function is Active

In the next step we create our custom Kernel BAdI definition and mark it for Multiple Use, Reusing Instantiation for Instance creation.

The BAdI defintion also defines a Filter i.e. it is Filter Dependent on the Infotype number (see screen shot below) which in effect means every implementation will be called by the framework with a match of the specific Filter value (in this case it is the infotype number) that will be defined in its BAdI implementation. 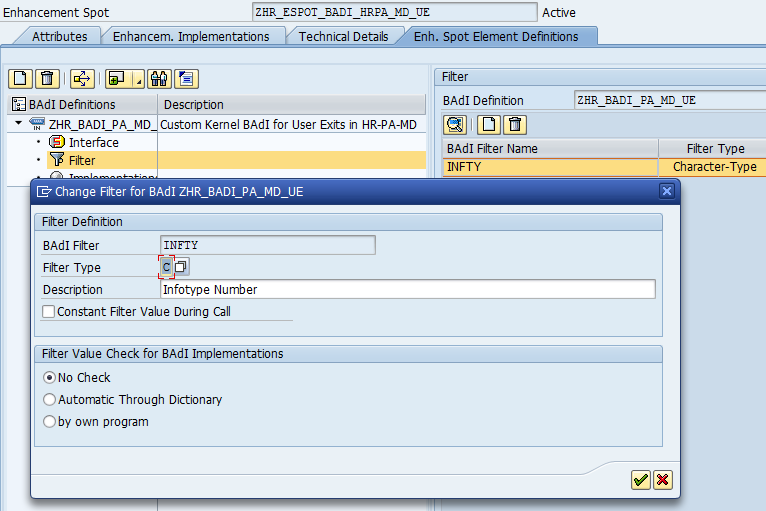 You will notice under Runtime Behaviour, in the field Switch Framework, the system has detected that this implementation is currently switched off by the assigned Switch ZHR_SFW_PA_MD_UE_INFTY_0000. The properties of this Enhancement Implementation also automatically is set to Standby as per the activation status of the assigned switch (see screen-shot below)

Next, we create 2 Enhancement implementations (EIs) for Infotype 0001 – then we create 3 BAdI implementations on top of these 2 EIs. (as per screen-shots below). Actually I did create one more EI in the prototype but let’s just ignore it as the ones explained below is exactly the same. 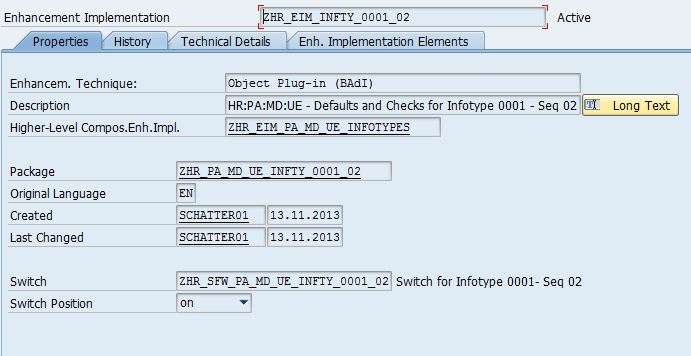 Because the Switch behind the EI is turned ON, both the BAdI implementations will be called by the system but we have deactivated the Switch of the second one and therefore we do not want to call its business logic at runtime. To achieve this requirement, we implicitly check the Switch in the implementing Class of 02A as per screen-shots below in both its Methods that are called by the system at the time of HR master data maintenance.

And the same for the PAI Method

Finally, we call our BAdI from the Function Exits of PBAS0001 – we call the Method before_output from the PBO passing the infotype number to the BAdI Filter 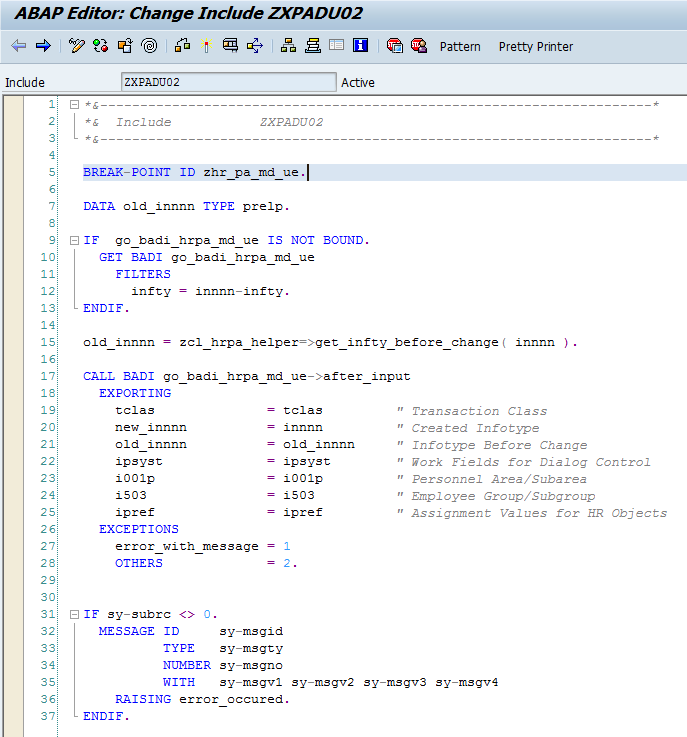 That’s the only source code that is ever going to be there so this is going to be pretty much static. All business logic for all the infotypes will reside separately in the BAdI implementation Classes.

Now that our model is ready, let’s revisit the SFW Browser to look at the final relationships.

Let’s also revisit all the components of our Enhancement Spot and its relationships.

Benefits of the Enhancement Spot BAdI

We have demonstrated the ease of developing enhancements by using the New Enhancement Framework leveraging the benefits of the powerful Switch framework to simplify, structure and add lots of flexibility to the enhancement builds.

Thanks for sharing this clear insight.

Deliver good insight of the use of new enhancement technology

The good points have already been highlighted, so i would not repeat those. Just a couple of this i would like to highlight -

I'm not sure what you mean by that, but we have "mutli-use" classical BAdIs. 'Multi-use' attribute is not the differentiating feature between Classical vs Kernel BAdIs.

I wish we have more of such genuine content in the ABAP forums.

PS - Sorry for being critical, it's hard to change yourself 🙁

I'm not sure what you mean by that, but we have "mutli-use" classical BAdIs. 'Multi-use' attribute is not the differentiating feature between Classical vs Kernel BAdIs.

What I meant is that it is possible to convert a Classic BAdI, which is not marked for multiple use, into a custom Kernel BAdI which can be defined as a "Multiple Use"

No, you will have to find it out for yourself - the intention of this blog is to highlight the benefits of using the new Enhancement & the Switch frameworks - its definitely not a "How-to" document 😀

thank u for your effort 🙂

In the UE includes where you have implemented the GET BADI call, i do not see the definition for the BAdI reference go_badi_hrpa_md_ue.

Am i missing something?

The BAdI reference is declared in the global data (TOP include) within the Function Group.

There is however a high possibility that one might come across a requirement where you may require to retain the business logic of BAdI Implementations 1 & 3 but not 2 but all 3 belongs to Enhancement Implementation X - and in the project scenario one needs to do it quickly with a click of a button instead of commenting out source code and/or restructuring the development objects etc.

Other advantages of keeping Switches at this granular level includes, as already pointed out in the blog:

I think this is not possible with BAdIs linked to Enh. Spots, isn't it?

I'm sorry but I'm afraid that is not true. 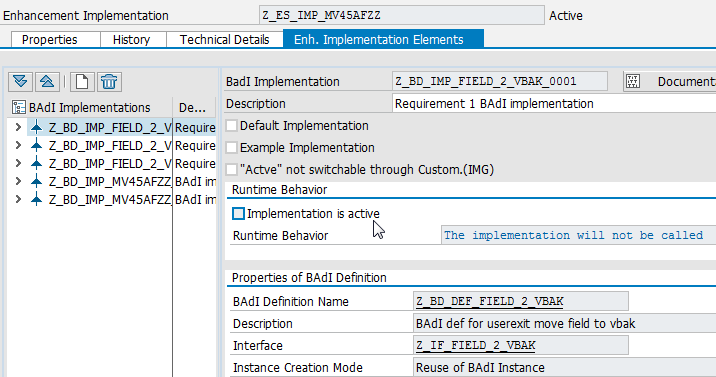 Am I misunderstanding something?

I don't have access to SAP system so am not able to check this out but I do remember at the time I was unable to deactivate at the BAdI Implementation level. I was working on ECC6.0 EhP6 SAP_ABA 7.31 – which Enhancement Pack are you on? Also did you try to debug after deactivating one of the BAdI Impl (as per the screen-shot in your post) to check that particular one is not called by the system when the Enh Impl is called?

Yes I have tested, it works as intended. I'm guessing that as long as you have the new enhancement framework on your system you should have this option. Maybe you overlooked it somehow, I don't know, but maybe this option should be mentioned in your post.

PS: Actually, if you look at your screenshots, you have this option available.

I'm sorry but I'm afraid that is not true.

Am I misunderstanding something?

I think I have figured out the cause of the confusion. In your example you are able to activate/deactivate at the BAdI implementation level because you do not have a Switch associated to its parent level i.e. at the Enhancement implementation level.

I would suggest you build an Enhancement Spot from scratch incorporating the Switch Framework (similar design to the example that I put forward in my blog) to be able to validate this.

Yes, looking back at your screenshots I noticed this! This is very poor design by SAP (imho). This will make me think twice about implementing a switch framework in my designs, as I'm not sure the added complexity will (always) be worthwhile.

Is it possible to delete a BFS? I always get the error message that the BFS is active system-wide and I cannot deactivate it no matter how hard I try. I tried searching for how to delete this and I get nothing. I don't think I like this framework very much 🙁

Also, I have activated everything and assigned it like in your post, and it would seem that everything would be correct, but the switch in the enh. impl. always shows as being in the off state! I don't understand.

Did you activate it via SFW5?

Of course, otherwise I wouldn't get those green lights. They would be red. Correct?

PS: A picture for reference:

I got it! I think I had a session open in edit mode somewhere, and instead of complaining about it, SAP just didn't allow me to delete the BFS and was messing up everything. That's the problem with SE80... if you navigate too much there's no telling what you left behind 😛

However, Sougata, for your information, if the switch is ON, you are able to activate/deactivate a BAdI implementation as you see fit.

If the switch for the enh. impl. is OFF, then you are right, the checkbox is grayed out and there's nothing you can do about it.

I hope this clears out this misunderstanding.

I have a doubt.