Demo Jam is an SAP event where contenders from SAP Users and Partners have six months to design and build something really cool using SAP Technology. They then have a strict six minutes to tell their story and show the software to an audience of thousands of SAP enthusiasts and Techies. Once all the Demos are over the audience decide the winner using a clever device (Clapomoter) that records the noise the audience makes for each group. I think it runs on HANA.

Watch a short video explaining why Demo Jam is so important

InnoJam is a 30 hour non stop event where participants get in to teams in the morning. They are presented with a problem or a task to solve and given access to various SAP technologies in The Cloud and then they design & build a solution then present it back to the group of 100+ the next afternoon. The winner of InnoJam gets the chance to go on stage for Demo Jam the day after.

Very similar to Demo Jam but without the budget and with approximately 88 days less development time.

This year the winning team from InnoJam went on stage and actually won the Demo Jam in Amsterdam, how was this possible??

As a participant in a number of InnoJams and having watched several Demo Jams myself, I have an idea as to why and it is all down to a concept called Design Thinking. For those unfamiliar with the term it is basically getting an understanding of what a user will want before going ahead and actually building it. Design Thinking is now an integral part of InnoJam with the participants mapping out who their users are likely to be, then exercising empathy and viewing the solution “through the eyes of the user”. What will make her /him use it? A key factor in this is the interviews with other participants to get a cross section of views so that the solution built is Viable, Desirable, Usable and Commercial.

The Demo Jam contestants were all very impressive and the last was a particularly cool application that recognised hand gestures, had a touch screen on the front of a fridge that could display data and a huge glass LCD wall which could be used to show various visualisations and recognise the users thumbs up for a yes of thumbs down for a no. Very cool! But sadly not a winner this year.

The winning team’s app was very basic and not aesthetically advanced but it worked. More to the point it was something that a lot of the audience could relate to and see themselves using. They tackled the difficult topic of Sudden Infant Death Syndrome, or Cot Death. The app they designed was like an advanced Baby Monitor that took regular readings (temperature, breathing, movement etc) and compared these with a number of key criteria that could signal something may be wrong. The app would then turn from Green to Red, sound an alarm and give you the option of calling local emergency / Doctor help if required. The clever part of this is that all data recorded gets stored in a central Cloud database
and can be viewed and analysed by health professionals and experts the world over who are trying to reduce this terrible affliction.

Design thinking had a large part to play in the concept they designed but what is really interesting is that and audience made up mainly of developers picked them as a winner. In my view this shows that our ecosystem of SAP Developers are now thinking “What is usable” rather than “let’s build something cool” This is very interesting. 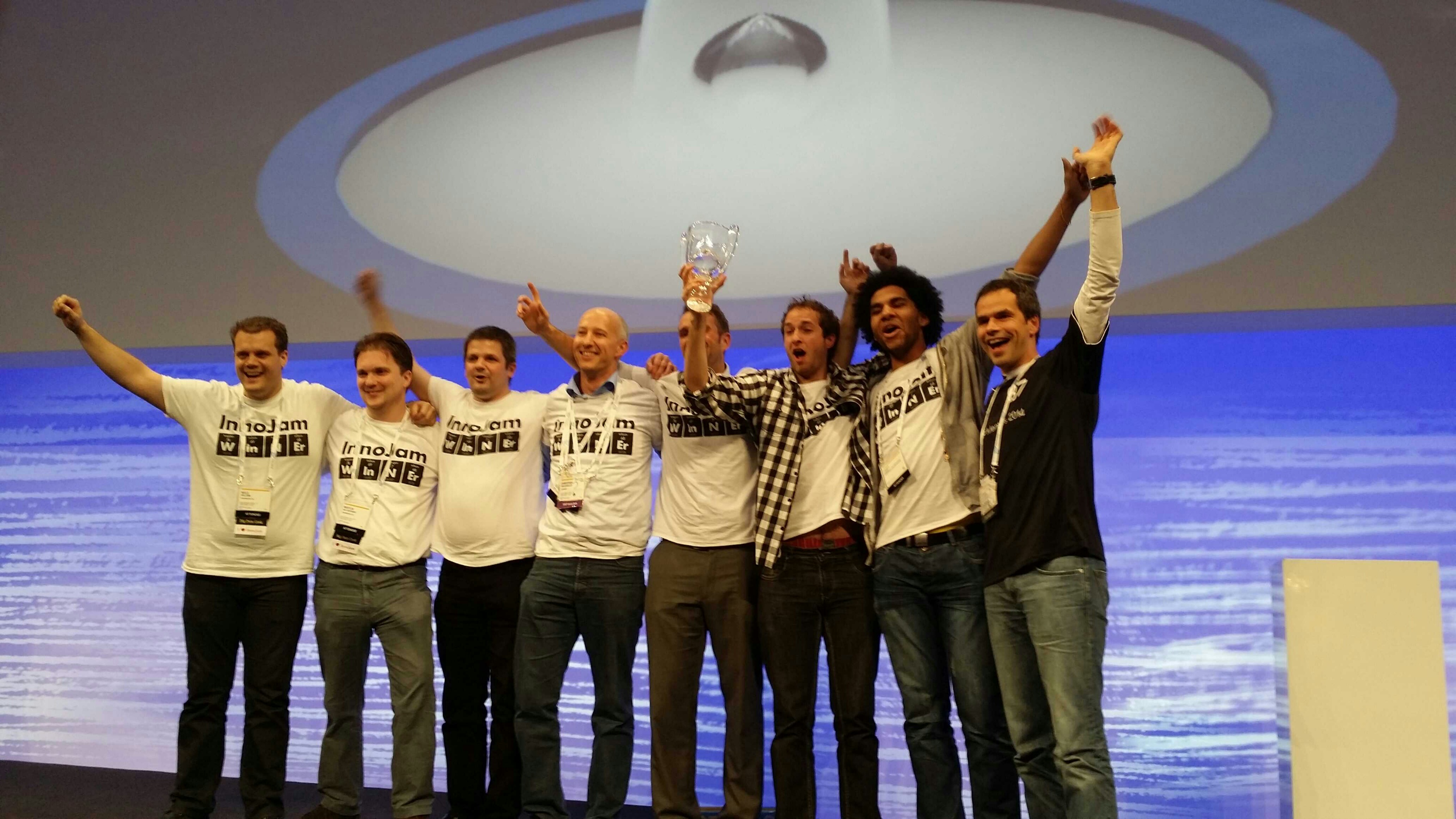 I caught up with Matthew Riches form the winning team and asked about his experiences of Design Thinking:

Tell me a bit about your day job

Around 3 months ago I began a new job as the ‘Principle Solution Architect’ at a specialist SAP consultancy called Red Solution. I have been a functional SAP Consultant (Supply Chain) and Project Manager for 12 years and was looking for a new challenge. Red offered me the opportunity to broaden my horizons beyond my traditional confines of the SAP business suite and get involved in the newer SAP offerings and technologies. My actual role is therefore a little schizophrenic with around 50% of my time being spent architecting processes within the SAP business suite for various customers and 50% spent researching, blogging and getting to grips with emerging SAP technologies.

What made you decide to sign up for InnoJam?

I’m at the stage in my development where I have so much to learn that I look for any and all opportunities to further my knowledge. InnoJam seemed like a great chance to see the practical application of the new SAP technology whilst gaining practical hands on experience.

Before InnoJam, what aspects of Design Thinking did you use in your day job?

To be honest before attending InnoJam I did not even know what Design Thinking was. (Not sure I should admin that!) I have implemented projects using various methodologies such as Scrum and Agile which have certain common features and I would like to think that the more ‘common sense’ aspects of DT are things that I have previously applied. But certainly the complete DT framework is not something I was familiar with. I should also add that I am still by no means an expert now and am currently actively seeking ways to plug these gaps in my Knowledge.

Thinking about the solution you built for InnoJam, how
influential was DT on your project?

Without Design Thinking we would not have won InnoJam or DemoJam.

Utilising the concepts and tools of Design Thinking allowed us to focus on the specific problem we were trying to solve and crucially also think about through whose eyes we were viewing the problem from. It sounds strange to suggest that a subject such as SIDS (Sudden Infant Death Syndrome) can be viewed from more than one perspective, but I believe it can. For example in our application we focused on two distinct perspectives, firstly the perspective of a parent and secondly the perspective of an academic body conducting research into SIDS.

While the general goal of both these two groups is of course convergent, i.e. to save the lives of babies, the specific goals are subtly different. When considering the specific functionality required of an app designed  ‘to help prevent SIDS’ it is a common sense inference to suggest that the parent places far more emphasis on functionality that can warn them quickly that their baby has stopped breathing rather than functionality that records (for example) the child’s temperature, or sleep position at the time the child stopped breathing. At the time of a critical incident, from a parents perspective this information is irrelevant whereas for an academic body that is researching the contributing factors involved in SIDS it is, by contrast, crucial.

Initially our persona was a parent, more specifically a mother, and as soon as we focused on the solution through these eyes we realised that we needed to make something that was clear and simple, and this is reflected in our final UI. The application was designed to be as unambiguous as possible; if the screen is green and the alarm is silent then there is no issue and no action is required, if however the screen is red and the alarm sounds then urgent action is required.

One thing for sure was that our application was certainly not the prettiest, the most subtle nor the most technologically adventurous entrant in either InnoJam or DemoJam, but we took the view that if it was our child who had stopped breathing would we care about the nuances of design or specifics relating to the application’s underlying technology platform? The answer from our perspective was a resounding ‘No’.

However this is not the end of the story because once we had looked at the problem through the persona of the parent we still wanted to see if we could also accommodate the required functionality of the second persona we had identified (the academic body or charitable organisation) without compromising the solution for the primary stakeholder. In our application we found that we could. In our design the
mobile phone contains the simple, unambiguous information a parent would require and, crucially nothing more. However all the detailed information regarding temperature, sleep position, heart rate etc. that an academic body would wish to analyse is recorded on a SAP HANA platform which is divorced from the information a parent would see on the mobile device. The two personas are
therefore accommodated, and in such a way that the functionality required for one does not compromise the effectiveness of the other.

What did you learn that you can apply to your current role?

I would like to think that I have always tried to look at the solution through the eyes of the people who will be using it, but this experience has taught me to go further and as a matter of course interview, document and involve the specific stakeholders who will be using the system. From an Architectural standpoint this is obviously an important consideration as a system can only be deemed to be fit for purpose if it fulfils the actual, rather than perceived needs of the actual users.

Can we expect to see you at InnoJam next year?

Absolutely – I wouldn’t miss it for the world!

Thanks Matthew for your input and well done on winning InnoJam AND Demo Jam!

Great blog and interview. Really enjoyed the way Matthew explained how DT influenced and helped his team. Interesting to see how they combined two different perspectives, two different personas and points of view.

One of the things that drew my attention during the DT part of Innojam was how the teams dived into the topics during the Research phase. Since there were not so many people to interview or observe inside the Conference Area, and it was raining a lot outside, they called friends, family, did whatever they could to get enough information.

Thank you for sharing. And congrats again to the winner team!

Great stuff Tim - in particular the role of design thinking in the process was illuminating and useful and I have tagged it in my bookmarks for future reference. 🙂

One minor thing since this has come up a lot. An Innojam winner did win DemoJam once before - but: it was at DKOM so there is perhaps that asterisk. 🙂 Here's the interview and writeup I did at the time for those who are curious... http://www.jd-od.com/2012/03/20/how-an-innojam-team-won-demo-jam-for-the-1st-time-with-leonardo-de-araujo/