Your own, personal… keynote

I often get asked what it is like to be a “developer evangelist” and “what do I do?”

I think the term “evangelist” may be misleading and that “advocate” would be more fitting. The way I see it it’s about representing the community’s perspective when it comes to empowering developers. As a developer advocate you have to be at the pulse of the community… or better, act as the platform to get a more diverse set of ideas from the community.

Which brings me to the point. A couple of days back I was surprised to see the following tweet in my timeline: 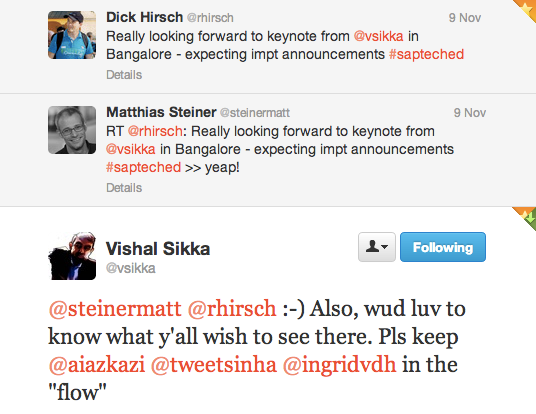 Now, to be clear on this – it’s not to me to say whom Vishal meant with saying “y’all”. It could have been a polite way to ask Dick Hirsch for his ideas. Richard is one of the most active and well-respected bloggers on SCN, and the topic leader on Cloud Computing by the way. Yet, he could equally well have addressed the whole twitterverse or even the entire community. So… I kind of like the notion of thinking of this tweet as a call for crowd-sourcing additional ideas for the keynote in Bangalore. That’s my very own interpretation – your mileage may vary!

Yet, does it matter if it was meant as such? Personally, I would love to read about what other people would like to hear just to better understand our community.

To get this straight… I was never asked to “crowdsource the keynote“, neither am I involved in shaping the keynote. Having said that, it’s probably certain to assume that the main story plots for all TechEd events have been created together a while back. Also there probably is already too much good content as-is.

Still, any idea being shared here may be considered as additional input or discourse.

To cut it short, let’s get to the point:

“What would you like to see in the keynote in Bangalore?”

[Famous last words] I’m really shooting from the hip here and hence I’m curios about what will happen next. Ultimately we would end up with a lot of great suggestions. We could then summarize the findings and send them to Ingrid van den Hoogen, Aiaz Kazi and Amit Sinha.

(= we surely do not want to overload them or cause any additional effort for them!)

Seems like Tom Van Doorslaer was first to put his thoughts into a blog:

My bet is on the HANA Cloud Platform

Well, obviously I want to see a clear strategic announcement in the keynote (hopefully confirming my suspicions). A shoutout to everyone that wants to start, or re-orient there SAP career with a strategic direction that will last another decade: "What Platform/Technology should we focus on?"

I agree btw that "Evangelist" is the wrong word. An Evangelist typically documents a story after it happened. You are much more a "Prophet" spreading the word on events to come.

But that doesn't cover the load either, because a Prophet only broadcasts. He/she does not give feedback to the source.

So maybe "Mentor" is the best word afterall 🙂

I would like to hear in detail about #RDL, Integration of Hadoop with HANA specifically Intel Hadoop distribution and SAP's Lava the Design Language for Analytic's.

I would like to make a kind request all SAPTechEd Keynote speaker's not to skip few of the - technical topics which is already been said in previous Keynotes instead please include new topics.

When something is said in previous SAPTechEd keynotes it goes over places and if a person want to discuss a particular topic (from previous keynotes) in detail at different TechEd Locations they do-not get answer in the same event as there is no one to discuss on the same.

I would like to hear the announcement of SAP Mobile Platform 4.0 with the following features:

(Instead of HANA you can also choose MongoDB or CouchDB)

Wel actually Mark, most of that is there already (but indeed never stated officially)

SMP in my opinion is already outdated

HANA doesn't need Gateway, it's easy to expose JSON services right out of the XS engine

HANA counted to infinity. Twice (oh no, that was Chuck Norris)

the AppDesigner: now that's a point I want to see. I may have missed it, but I didn't see any announcements coming from amsterdam - Model driven app development

That will lower the threshold for traditional ABAP developers into SAPUI5.

well, SMP is definitely not outdated from what I know, SMP 3.0 was a big topic at TechEd.

Concerning the AppDesigner... I'll see if I can get someone to shed some light on this.

I believe the AppDesigner has been withdrawn from SAPTechEd AMS, as wel as the usability testing for this browser-based tool (Test topic 1, https://experience.sap.com/post/show/106)

Not sure if it will be (finally) announced in Bangalore... Anyone?

Is the above opinion making mobility consultants gloomy ? 😳

I walked down the same road, therefore I think it is time to simplify the platform again instead of pushing more and more options into it.

Maybe Tom's vision of having it all in HANA Cloud will come true sooner or later... What a pity that SAP burnt billions for buying Sybase. But hey, we still have the PowerBuilder, ASE, ...

I think for satisfying each and every customer requirements or changing trend in market ( since innovations are on peak in mobile technology ) SAP is modifying the platform frequently. It is a competition for SAP to be the leader in Enterprise Mobile solutions when others like Kony, IBM and oracle are coming with good and cheap solutions. IBM is adding Fiberlink to its mobile portfolio to be prepared for future, http://www.philly.com/philly/blogs/inq-phillydeals/IBM-buys-Fiberlink.html

You can easily be a leader by buying all competitors including their customers. But in order to stay at the top you have to offer the best platform for your customers. This is not done easily by adding all single existing components into one product.

With SMP 3.0 much changes are on the way but at the end we will see if it is a platform that makes us consultants and also our customers happy.

horrible news. very thing is hana and hana is everything in the future.

The HCP license seems to be indefinite. ABAP licenses are still running behind.

I was thinking the same and also SAP NetWeaver 7.4 Developer Edition on HANA that runs on your local machine no need of AWS.

We want to play with HANA everywhere

Thanks for speaking up guys!

Can we see a little more of RDL please ? Vishal Sikka gave us a sneak peek in Bangalore 2 years back and we have been dying to see more ?

I love how this informal engagement generates excitement.  Super cool and courageous that you've taken the plunge Matthias and I have to commend Vishal and his team for being attentive to the social discourse.  Glad you also set expectations that these requests might not be in the keynote, but certainly this blog and corresponding comments are a rich source of what interests folks and what they would like to see and hear more about.  Valuable for more than just the keynote 😉

Thanks for chiming in and helping to frame this blog and my intentions:

... this blog and corresponding comments are a rich source of what interests folks and what they would like to see and hear more about.  Valuable for more than just the keynote 😉

The last part is the most important one I believe, yes... Vishal's tweet was the trigger for this blog, but regardless of the keynote and what it may and may not contain/address... it's still good to know what our community members have on their minds and where we can improve our messaging and offering!

Thanks soo much for your support Marilyn!

I have captured my wish some time ago in a tweet already:

I noticed that... great blog! I'll make sure this is included in the list I'll send out early next week! Thanks for sharing your thoughts and providing sound arguments...