These days, BODS is playing a very important role in the SAP system landscape.

Many customers use BODS to pull data from Non-SAP systems to SAP BW.

These documents are primarily intended for BW consultants who would like to know more about the Integration, Modelling and Transport mechanism related to BODS.

In this part 1 document, we will go through how to integrate BW and BODS using RFC connection.(This topic has been explained many a times in SDN. For making 2nd and 3rd part more meaningful, I have included the integration as Part 1.

Part 2 will help you to understand how modelling is done in BODS with BW as the data target (http://scn.sap.com/docs/DOC-52550)

Part 3 will help you to understand the transport mechanism in BODS(http://scn.sap.com/docs/DOC-52808) 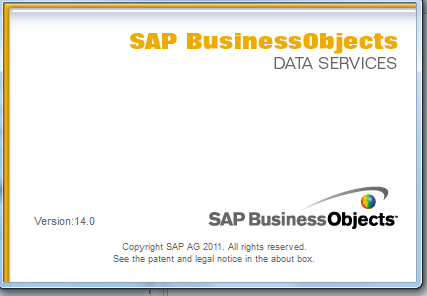 BW – BW7.3 (where BODS is now available in the source systems list in BW)

BODS/BO server is running on Windows platform and the BW OS is HP-UX and database is Oracle.

Login to RSA1 Source systems and create a new connection under BO Dataservices.

Please note that for all BW versions prior to 7.3, you will not see BODS as a source system.

In such case, you will have to depend on ‘External System’ source system type for creating the connection. 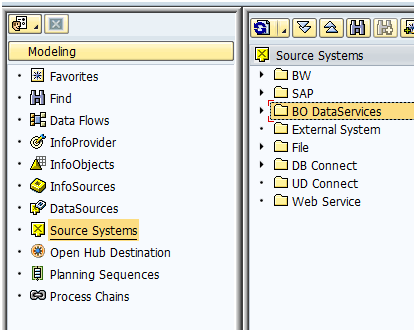 Give the required credentials

Give a Program id (in this case it is SAPBODSPB1) . This is a very important step. 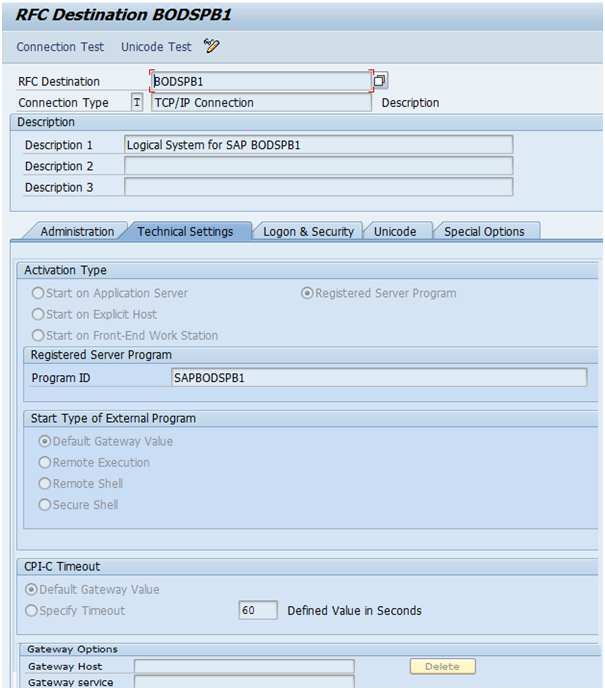 Important point to be noted here is that when you give details for external source system in RSA1,better dont give the gateway host and gateway service in case if you are not 100% sure about it(in simple words, keeps them blank)

The system itself will manipulate it(default gateway value) with the program id, provided you give the same(case sensitive) in both the ends(BW and BODS) 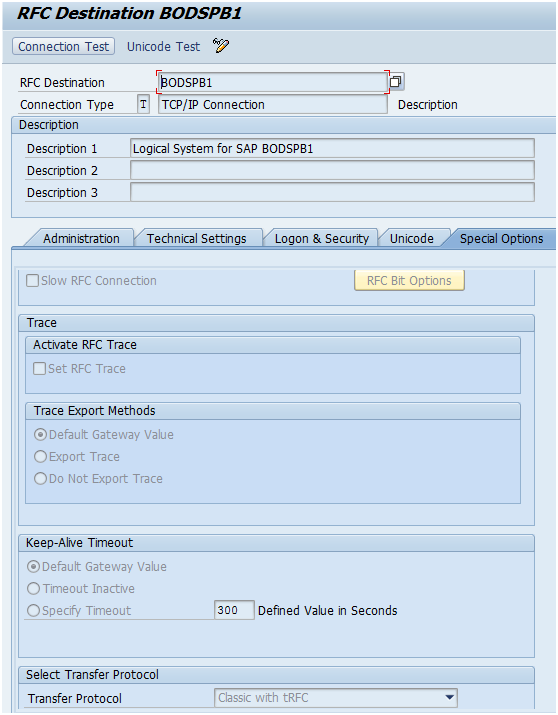 Save and go back and give the required credentials.. 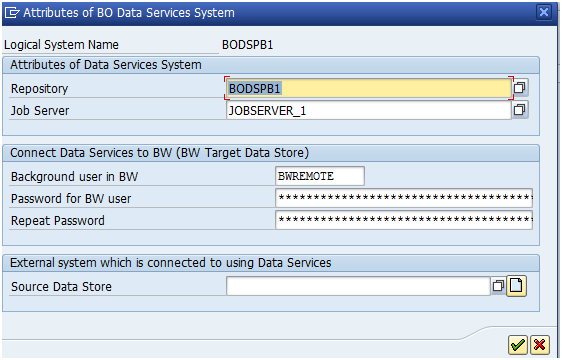 The same can be seen in SM59 also under TCP/IP connections.

Now BO Dataservices will have a connection names BODSPB1 under it.

Now log into BODS Management console and give the corresponding BW server details.

The required BW credentials can be obtained in the context menu of the BW server in the SAP Logon pad.

RFC Program id is the same one SAPBODSPB1(case sensitive) which we had given in BW side.

The user used here is of type Service User.

For RFC to work as expected, the status should be in STARTED state.

The connection test should be successful.

There can be lot of issues which might come in between during the configuration,and it depends on the  landscape in which you work:

Anyways, please find some points which you can check if you encounter any issues in between.These were  some of the solutions that were given by experts when we were facing some challenges in integrating BW with BODS.

1) There can be a problem in the gateway; you need to contact your basis team for this issue.The gateway for BW might not have been opened to connect the BODS server, for checking this we need to ping the command telnet <hostname of BO server> 3300 in the BW server. If it’s not listening, then gateway is the culprit.

2) Change the gateway to its port number.Find the port number in the services file (windows\ststem32\drivers\etc\) of a machine with the sap GUI installed.There is a chance that your BODS server doesn’t have the sapGUI installed and doesn’t have the services file and thus can’t translate the gateway name to a port number. Installing the sapGUI may also fix an issue setting up the RFC but not being able to see it in the list of available RFC connections in the BODS console.

Hope this was useful. 😉 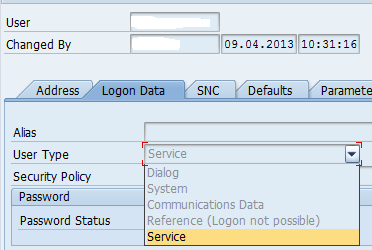 Very nice and useful blog. Thanks for sharing with us.

Waiting for the other 2 blogs.

Waiting for the 2 other docs...

Really very good and nice blog.  Thanks for sharing.

It adds one topic extra in my till now BODS knowledge... 🙂 🙂

Thanks a lot. Glad to see your comments..

Just started preparing the 2nd and 3rd Part. Might take some time to publish..

Very informative blog .Waiting for the next 2

Good to know thanks for sharing

waiting for part 2and 3.

Some new piece of information for me.

Useful document for me.

One more kudos blog after housekeeping activity in BW series.... 😆

eagerly waiting for other 2!!!!

Very informative. Thanks for sharing

Thanks for this wonderful explanation of BODS.

I have been hearing about BODS for a while and after going through your document i got a bit of idea on how it works.Thanks for sharing this.

Can  BODS be considered as replacement for UD connect or DB connect plz confirm ?

BODS is "premium" alternative to UDconnect or DB connect from my understanding.

If you just want to connect to a db and load simply table contents into BW, BODS is too much overhead. But if you have to do some transformations, harmonizations, etc. on that table, then give BODS a try.

Am just learning BODS..This documents is very helpful for me..Thanks for sharing it..

Is this related to that when I am creating Source System I didn't select source data store name?

Are you filling the 3rd party selections tab correctly(job name, repository, job server and all)

I am filling 3 from 4 options (Repository,Job Name,Job Server) and I am leaving advanced empty

I am also facing the same issue...

did you get any solution for this.

When I check the details of the process while info package is running and is in yellow state for longer time I am seeing a message saying "No IDOCS received from Source System".

Could you please reply this with the solution you got.

I am facing an issue…

I am not able to run the job from BW side by clicking on start inside info package and it take very long time without success, But When I am running the job from Data Services it is completed successfully.

When I check the details of the process while info package is running and is in yellow state for longer time I am seeing a message saying “No IDOCS received from Source System”.

Could you please reply this with the solution you got.