What would you do with an iPad, SAP HANA and some LEGO blocks? A team of German high school students used those ingredients to build an automated system for restocking retail inventory.

Their wheeled robot — a tablet computer ensconced in toy building blocks — rolled through a demonstration booth staged as a supermarket at SAP TechEd 2013 (@SAPTechEd) in Las Vegas last month. The device used SAP HANA to differentiate between a shelf full of inventory and one that needed restocking.

“We can track every single product in a supermarket,” said Tobias Gaumann, one of the students who developed the system. “And we can help develop better layouts for the shelves.”

The robot navigated from shelf to shelf with the help of the iPad’s camera, which also photographed each shelf. SAP’s flagship in-memory platform analyzed each photo to determine whether or not the shelf was full.

A full shelf meant the robot continued its patrol. But when SAP HANA found a couple of items missing from a shelf, the robot returned to the warehouse management system for more inventory, which it used to restock the empty shelves.

“HANA told it what’s wrong and what’s missing on the shelf,” Gaumann said. “Now the robot is delivering the packages and restocking the shelves.”

This technology could make more time for human workers to complete other duties, and it would be especially useful for retailers with contracts dictating how the products should be displayed. 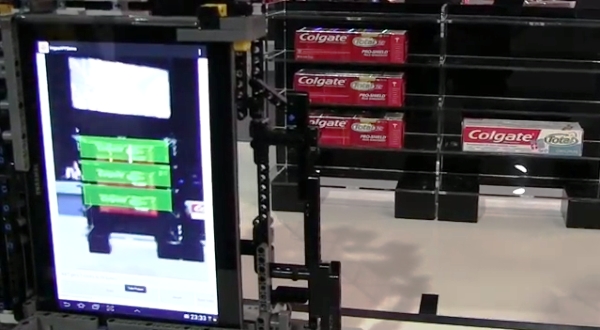