PlayStation 4 vs. Xbox One: Winner Emerges Via Social Analysis

Gamers everywhere are getting ready to spend the winter huddling around their next-generation consoles, but which one are you most likely to find under the Christmas tree? This Friday, Sony is releasing PlayStation 4 six years after its predecessor PlayStation 3. Microsoft will follow suit a week later when it releases Xbox One, the forerunner of which – the Xbox 360 – was released seven years ago, a veritable eternity in the world of tech. Such a pace means that the landscape of home entertainment for the next half decade hinges on the outcome of this clash of consoles and billions of dollars at stake.

With so much anticipation and excitement around the future of home entertainment and gaming, I wanted to take a closer look at who’s winning the hearts and minds of folks in the lead-up to launch. I fired up SAP Social Media Analytics by NetBase, a tool which captures and indexes vasts of amounts of unstructured social data, including Twitter, Facebook, blogs, forums and more.

Sony announced the PS4 back in February while Microsoft announced the Xbox One in May, so we’ll go back to February and then look at different time frames to determine which console is generating more buzz.

So in terms of pure volume of conversation, PS4 is clearly winning the day; but what are people saying? By comparing positive mentions for both consoles, starting from the time they were announced (May 21), we see the following breakdown:

What does this mean? Roughly speaking, for every one positive mention that Xbox One gets, PS4 gets 2 positive mentions, another encouraging sign for the PlayStation. (Incidentally, this roughly mirrors the breakdown you’ll find on xboxonevspsfour.com)

To be fair, we’re only looking at positive mentions. Let’s add more context and see how the positives stack up against the negatives. To start out, we’ll look at the last 3 months. Keep in mind that we’re only comparing mentions which have sentiment (not all do).

It appears the PS4 only gets 1 out of 4 negative mentions, as opposed to about 2 out every 5 for the Xbox One, but this is only the average over the last three months.  Let’s take a look at how these trended over that period on a timeline:

It’s clear something (bad) happened for the Xbox One in the week of September 9th when all of a sudden negative mentions slightly outweigh positive mentions.  After that the net sentiment never breaks 30% again. After digging a bit into the data, it turns out that Edge published an article quoting anonymous industry sources stating that the PS4 “is currently around 50 per cent faster than its rival Xbox One.”  The story was picked up by IGN and widely shared. While I personally don’t think anonymous sources are particularly credible, especially with claims like “50% faster” (that’s just a bit too convenient of a round and easy to understand number), it appears to have impacted the narrative. To show how, let’s look at the top attributes that people mentioned along with the key terms of PS4 and Xbox One.

It’s plain to see that the PS4 is now considered more “powerful” and the Xbox One “weaker”.  This is again reflected when we take a look at what people don’t like:

Thus far it’s been looking better for PlayStation 4, but lest you think I am partial to that console, let me point out that it hasn’t been all rosy for Sony either. One wrinkle is actually lurking in the two comparisons above.  You’ll notice that one of the more positive attributes of the Xbox One is “launch lineup” and in second place for what people don’t like about the PS4 is “have no game.”  To look into this a little bit further, I created a couple more focused searches terms to get the pulse of what people were feeling about each console’s launch lineup of games. Here, Xbox One is the clear winner:

As they say, “software sells hardware.”  Superior hardware specs may not matter much if the compelling game titles are unavailable on your console.  Net sentiment clearly favors the launch game lineup of Xbox One, which is hovering comfortably at around 50%.  It’s been a little rockier for the PS4 on the other hand, with sentiment taking a nosedive the week of October 13.  After taking a closer look at what happened there, it turns out that a rumor was published on the October 16 and confirmed by Sony on October 18 that Driveclub – an upcoming racing game title – was being delayed till 2014.  This came after Ubisoft announced on October 15 it was delaying its much anticipated title Watch Dog until 2014 (albeit for both platforms).

By taking a cursory glance at some of the data and visualizations made available by SAP Social Media Analytics by NetBase around the race for next gen console domination, it appears that at the moment the PlayStation 4 is perceived to be more powerful with better hardware specs, and in general is being talked about more. The Xbox One has been trailing in the PR battle and picking up some negative sentiment initially around its DRM policy (something I didn’t go into here) and more recently around hardware comparisons. Ultimately, however, games sell consoles and on this front the Xbox One is the clear winner, with several Sony titles recently announcing delays into 2014.

Which console will you buy?

You can find on Twitter @leeclemmer or less frequently on my personal blog at leeclemmer.com. 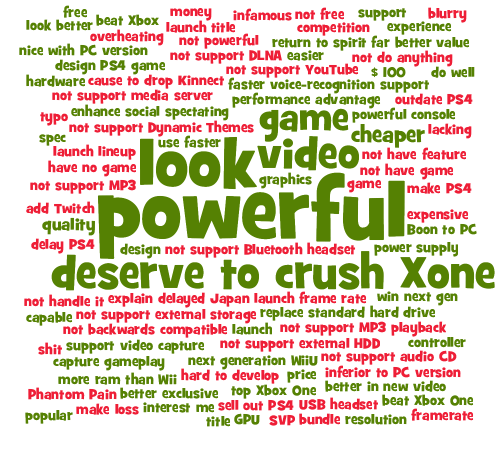 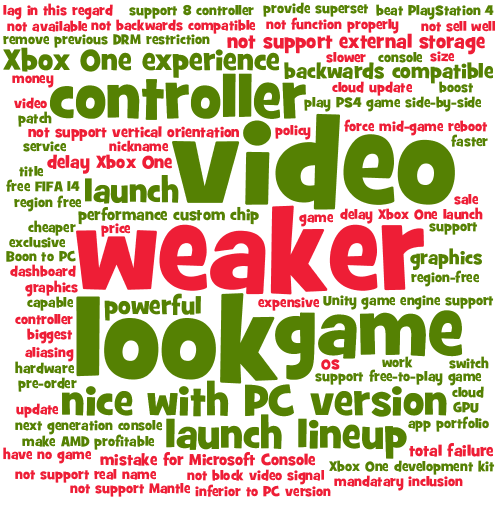 None of them. I build my PCs from scratch. This way I get the ideal gaming PC outshadowing even the PS4, and PC games are significantly cheaper than the console versions.

Hardware specs outperformes for PS 4, however games availability is a concern.

For X-Box One avilability of more titles makes it a hit, moreover Kinect in X-box is game changer.

However, I am still a Desktop PC fan, which can be customized as needed! Its a differnt level of satisfaction building your own box!