SAP TechEd Amsterdam: A Wrap-Up and some Food for Thought for SAP

Since I’m active on SCN, taking part at many Customer Engagement Initiatives and being familiar both with NW 7.31 and 7.40 on HANA I think I was well prepared for this year’s TechEd but nevertheless the event offered many exciting news.

In this blog I will cover some most important news about SAP NetWeaver platform and my thoughts about the most promising technologies for creating next-generation business applications. I’ll close with an advice for SAP: what errors should SAP try avoid and in what kind of technology SAP should invest especially with regards to HANA.

From my perception the main topics of SAP TechEd Amsterdam have been “HANA”, “Cloud” and “Fiori” – at least this was SAP marketing would like us to think. Of course these are big topics and I will come back to them later but one thing is more remarkable: SAP invested in SAP NetWeaver infrastructure to make them ready for modern applications which have outstanding capabilities:

Let’s look at some of these topics in more detail.

Decision Management within the Enterprise

The business rule framework BRFplus evolved to SAP NetWeaver Decision Management and this changes a lot for you as ABAP Developer. With BRFplus and DSM you implement transparent business rules even business user can understand and test. You can deploy and undeploy them easily into systems (even hot deployment) even into systems on a very low release level.

BRFplus and DSM are sophisticated and advanced tools that make SAP applications easier to develop, to run, to maintain, to test and to change. They even allow code pushdown to HANA which allows to look at the effects of changes of business rules by applying them on operational data.

DSM is is open so that partners can build their add-ons. In fact there are already partner solutions like DecisionsFirst Modeler and DSA – Decision Service Accelerator. In his sessions and lecturesCarsten Ziegler announced more exciting features and gave an outlook about the future roadmap of DSM.

IMHO DSM has enormous potential and software architects and developers should learn how to use it to create business applications that are easier to change in shorter time and can help business users to understand the impact of changes by doing simulations on operational data. So BRFplus and DSM will lead to a better corporate decision management which will help to get an advantage over competitors.

Oliver Jaegle introduced the Business Objects Framework BOPF in Amsterdam. IMHO every ABAP developer who is interested in rapid development of transactional applications has to know  these techniques he described in his blog entry: http://scn.sap.com/community/abap/bopf/blog/2013/10/08/agile-custom-development-with-bopf-and-fpm–session-at-teched-amsterdam

If software architects and developers want to reduce implementation costs, follow a proven and standardized programming model and keep compatibility with SAP standard applications they have to learn those frameworks. But it’s not only about speed of development and so costs, BOPF follows a metadata driven approach that also makes business applications transparent and easier to change.

For everyone interested in In-Memory technology the following is really exciting and probably the biggest HANA related news: 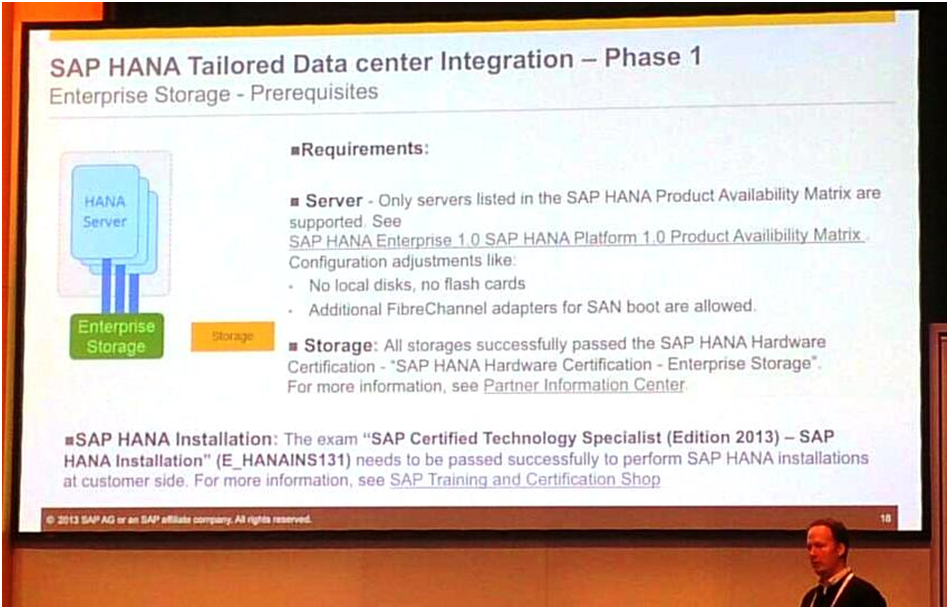 SAP opened HANA up for enterprise storage systems which really simplifies and unifies processes and system architecture in data centers.

My Advice to SAP: Please slow down and help us adopt new Concepts and implement new Technology

The latter is a very good example that SAP listened and made adoption of new technology easier. In fact this was my most important message when talking to SAP executives and product owners at SAP TechEd. Within the last months SAP has created many products and improved existing ones and added remarkable features that we can use for In-Memory and classical applications.

Now it is time to learn about, implement and use the new and outstanding features. With events like SAP TechEd, SAP Inside Tracks and platforms like the SAP Community Network, demo systems and so on it easy to understand and learn the new techniques.

From my experience the same is not true for implementation and I wrote some blogs about it. It seems to me that the speed of SAP was too high in the last one or two years and like in traffic speed leads to accidents and this means too many bugs and poorly integrated solutions. Now it is time for consolidation and making existing solutions easier to implement.

I think SAP has no other chance otherwise customers and partners will have problems to implement the solution with the consequence that new technology won’t be adopted and -as Jim Snabe explained very well– invention has to scale to become innovation.

In the past SAP was successful because it created a platform that makes it easy to create business applications. Of course all new technologies like SQL Script, ABAP for HANA are absolutely necessary  and they are in fact an enabler for creating completely new types of applications that help us tofind better decisions and of course the decision making process needs to be automated. And most important: the decision making tools should be powered by HANA and business people have to be able to understand them.

I already pointed that in my opinion that the most important aspect of HANA is not speed – it is an enabler for decision making in analytical as well as operational processes. So far I know only Decision Service Management is the tool having that kind of properties we need:

I think this is the most promising direction SAP should invest and – at least for me – the TechEd session of Carsten Ziegler about the roadmap of SAP NetWeaver DSM was most promising and inspiring especially because of its HANA roadmap. It was a little funny, because I realized this enormous potential of DSM together with HANA while I was interviewing Carsten Ziegler at SAP TechEd live:

When I started this interview it was my decision not to talk about much about SAP HANA although I’m involved in many HANA projects and we’re implementing it for our customers. Because HANA was omnipresent at TechEd Amsterdam I decided to shed some light on decision management which is in my opinion one of the biggest innovations in the area of SAP NetWeaver. Of course I covered Big Data and In-Memory in this interview but time was already nearly over and there would be so much more to tell. As I already mentioned this technology has huge potential and in the future I will definitely use with and of course share my experience with it.

In his SAP TechEd keynote in Amsterdam Bernd Leukert made a beautiful comparison of pointillism in Van Gogh’s paintings and Big Data and came to a central message: “Any business problem can be transformed into a real-time answer independent  of the size of the data to solve that problem. But what does it really means for business? It means a complete empowerment of people, it means freedom, it means going to new horizons.”  So as TechEd visitor I followed that advice and joined the lectures about platform innovation (security is a very important topic) and technologies that can create synergy or can get empowered by HANA. And I hope in the next SAP events and of course SAP TechEd I would like to hear more about DSM and other tools that are enabler for next-generation business applications. I would like to see those topics in a more focused and prominent position next year’s TechEd. Of course it was already there in Amsterdam but I’m not sure whether everyone understood the enormous potential.