SAP has a successful track record in using sport as a platform to showcase its technology solutions. From the Yankees dashboard to SAP sailing analytics, SAP has demonstrated how it can enhance the sports experience for participants, fans, organizers and media through its innovative solutions.

In 2012, SAP announced its partnership with the Deutsche Eishockey Liga (German Ice Hockey League).The DEL, in its current format, was officially founded in 1994 and is heading into its prestigious jubilee season (2013/2014). As a professional sport, over the last 20 years every game has been monitored and all of the statistics about every team have been recorded, resulting in a multitude of data.

Considering the amount of detailed information available and SAP’s expertise in analytics, it was evident that there was potential for a strong technology showcase.

The initial objective for SAP’s partnership with the DEL was identified quickly: reach out to fans in order to enrich and improve their perception of their favorite sport.

At this stage Design Thinking (DT) came into play and it was decided that three main questions needed to be answered in order for SAP to understand how to enhance the experience for ice hockey fans:

To answer these questions SAP brought together DEL representatives and SAP resources in a DT workshop which was moderated by DT coaches from SAP’s DCC (Design & Co-Innovation Center).

One of the basic aims of Design Thinking is to work closely with the target user group in order to learn about its structure and characteristics. In this case, numerous fans, fan club chairmen, casual spectators and other people related to ice hockey were interviewed in order to gain a comprehensive understanding of their needs and motivations.

During this process “personas” were created: fictional persons reflecting information and attributes collected in the interviews. Not only is a persona a generic set of characteristics – a persona is also provided with a name, a private background, hobbies, opinions and habits, all based on the profiles of those interviewed. It is impressive how tangible this process makes such a persona, the workshop members talked about “her” or “him” just as if it was a real-life person.

This phase, called “synthesis”, is a crucial point within the DT process and requires a huge effort from all participants. When executed correctly it provides a powerful foundation for the next steps in the process, notably: collecting ideas about potential solutions to the target group’s requirements and wishes, prioritizing them based on various conditions or building initial prototypes.

The relevance of this phase is emphasized by the fact that the participants were often proved wrong in their expectations and gained some surprising insights into the mindset of the average ice hockey fan. It might be true that an analytics expert finds it necessary to create complex analyses on top of huge datasets or a DEL employee likes to deep dive into statistics to expose information no one has ever seen. However, the DT workshop revealed that the average ice hockey fan is primarily interested in having a few basic figures at their fingertips, displayed in an easy-to-use and comprehensible manner.

Are new and innovative ways of analyzing data desirable? The answer is yes, but only as an addition to the most common basic statistics (i.e. goals, wins, losses or penalties) and, most importantly, presented in a way that everyone instantly understands without having to read an explanation or a manual.

Based on the afore-mentioned findings and having created well-defined personas, several solution approaches were developed, all of which had the ultimate goal of enhancing the fan experience.

Some of the approaches were rather ambitious and difficult to implement – at least for the moment. Some of them, on the other hand, were more traditional, hence more realistically brought to life. However, all of them had one similarity: they were all based on real requirements and wishes identified by real ice hockey fans and led to a significantly enhanced fan experience.

The solution approach that was first addressed turned out to be the best way of providing fans with both the huge amounts of ice hockey data and also a statistical tool that they had never seen before. To achieve this, experts from SAP’s Business Analytics services collaborated closely with UI designers from the DCC and after a few more iterations with the DEL they implemented a public-facing fan dashboard. This dashboard is linked on the DEL’s website and contains a subset of the most relevant ice hockey stats on team and player level, serving an ice hockey fan’s needs in the best conceivable way. 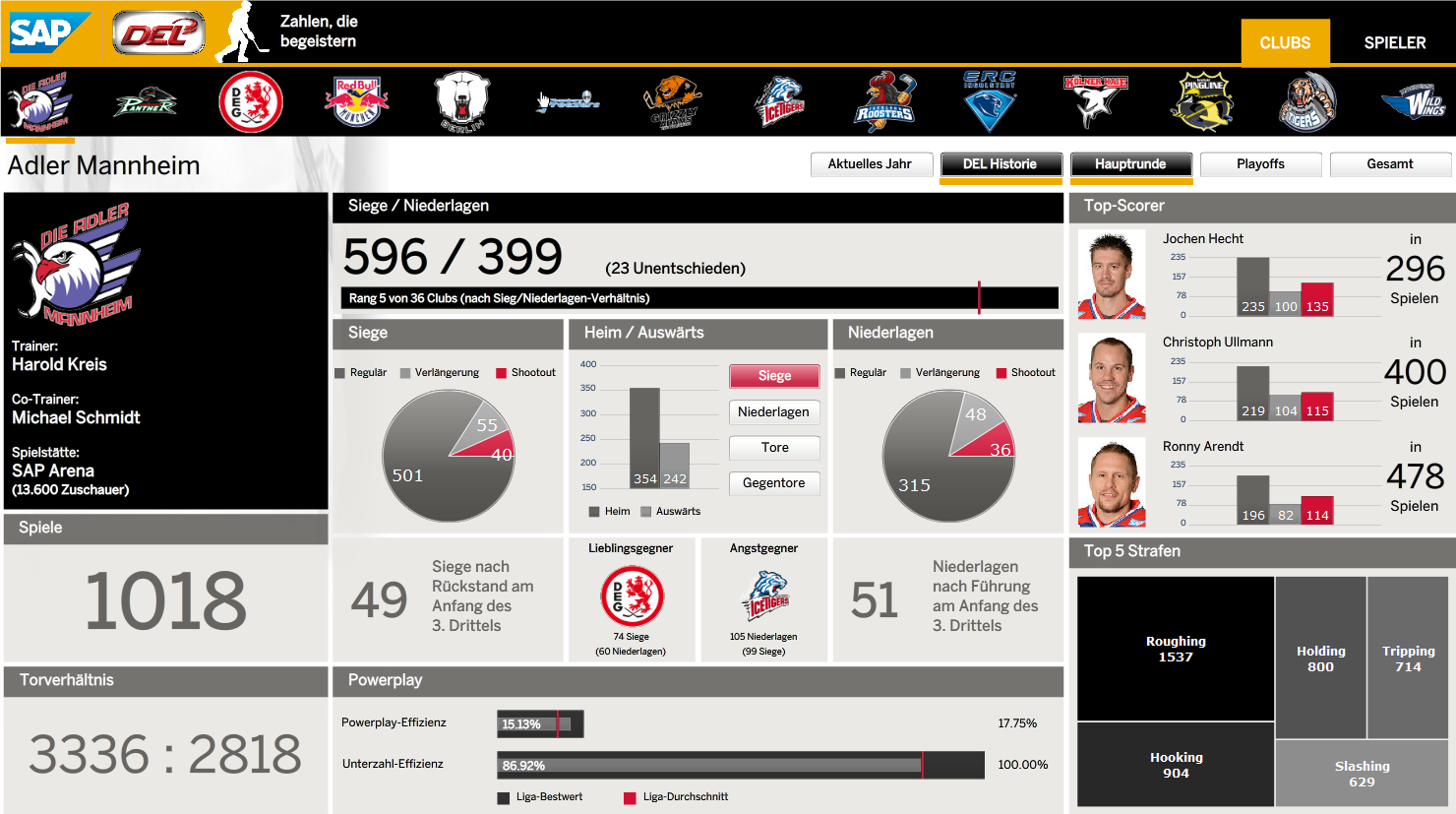 This project perfectly demonstrates how Design Thinking helps bring together several parties across SAP and external customers in a creative process in order to develop valuable solution approaches by prioritizing the requirements and wishes of the target user.

Great to see how together wsith the right people with the right mix of skills and knowledge we create good stuff for our customers. Stuff customers like !!! Thank you Milan for sharing this story and highlight also the involvement of SAP Business Analytics Services and our innovation&design thinking capabilities. Maybe there are others who want to go through this type of experience with you.... I will highly recommend them to you !!

Thanks so much for your feedback and support, Edwin, much appreciated!

There is also a project video available on YouTube if you want to learn more.