Whilst sitting in the (excellent) Fail Faire at the end of my first SAP TechEd a solitary thought struck me – I almost never fail.

As unlikely as it sounds I was struggling to think of one meaningful occasion when I had failed in anywhere close to a dramatic style. Sure there had been the odd set back, the occasional knock but nothing well … nothing significant. On the face of it this should have been the cause of jubilation, I mean no one likes to fail, and if I can’t remember the last time I failed then things must have gone pretty well, right?

Well no. For hot on the heels of this initial thought came the blinding realisation that had been burrowing into my consciousness for the last few days. The truth was as obvious as it was revealing; I rarely fail because I rarely participate; I never lose the race because I never strap on my trainers and turn up at the starting line.

To illustrate the point allow me to rewind back to 7:37 am on the Sunday morning of InnoJam. I remember the time because I was looking at the clock on the TV when I took the decision not to attend the event. I had slept badly and had woken up consumed with trepidation as even though I had been a functional SAP consultant for many years (and I hope a reasonably good one) I could barely write a line of code. In spite of the comments that I had read on the Internet assuring me that non-coders were welcome I had convinced myself that, were I to turn up I would be laughed at, ridiculed and would simply have to exit quietly with my reputation in tatters.

This thought was too much, too unpleasant, my flight reaction had kicked in and I resolved to pull out of InnoJam and quietly attend TechEd without any fuss two days later. I did however have one problem that I needed to address; my boss. What would his reaction be if he knew that I had pulled out without reason? I knew that in his place I certainly wouldn’t have been happy so I racked my brain for a plausible reason as to why I couldn’t or shouldn’t attend. For the next half an hour I wrestled with this dilemma but ultimately (I am now delighted to say) inspiration never arrived and eventually I decided that humiliation was preferable to an uncomfortable conversation with my employer. Reluctantly, therefore I headed to the event with spirits as low as my coding ability.

It was with a heavy heart I took my seat, and concentrated intently on avoiding the faces and gazes of my fellow participants. However, I am pleased to say that this feeling was short lived and was equally pleased to spent the first few hours of the event engaged in ‘Design Thinking’ a brilliant activity that required no coding at all!  Very soon I realised that rather than being a team of hard core programmers our team (christened CloudSitter) were actually a fairly eclectic group made up of (amongst other things) students, a lecturer, a basis contractor and SAP Mentor Twan van den Broek

Of course once the design thinking was over the coding began, and was my lack of coding skills noted? Was I ridiculed for it? Absolutely…. and I loved every minute of it!

You see by that point we had already started to develop personal bonds. We laughed, argued and laughed again as we got to know each other as individuals and by the end of the 30 hours, my concerns had dissipated completely and in its place was left only genuine affection for the new friends I had made.

So what then?  Well then we won InnoJam, and that was (up to that point) the proudest moment of my professional life. Seriously, how perverse is that! In a 13 year career as a SAP Functional Consultant and Project Manager my proudest moment was winning a ‘coding’ completion in which I had not written one line of code!

But that, as those of you who attended TechEd will know, was not the end of the story, as unbeknownst to me the winners of InnoJam compete in the DemoJam completion the next day. Now I’ll be honest, as I’d never been to TechEd before I was a little sketchy of what DemoJam was and by that point I was too busy enjoying the InnoJam victory to frankly care. I was euphoric, tired and, I’ll admit, a little drunk.

This feeling of euphoria lasted until the next day, until the exact moment when the curtain covering the stage was pulled aside and auditorium was revealed.  That second the sheer scale of the place hit and my euphoria vanished to be replaced by an uncomfortable (and somewhat urgent) feeling in my bowels. 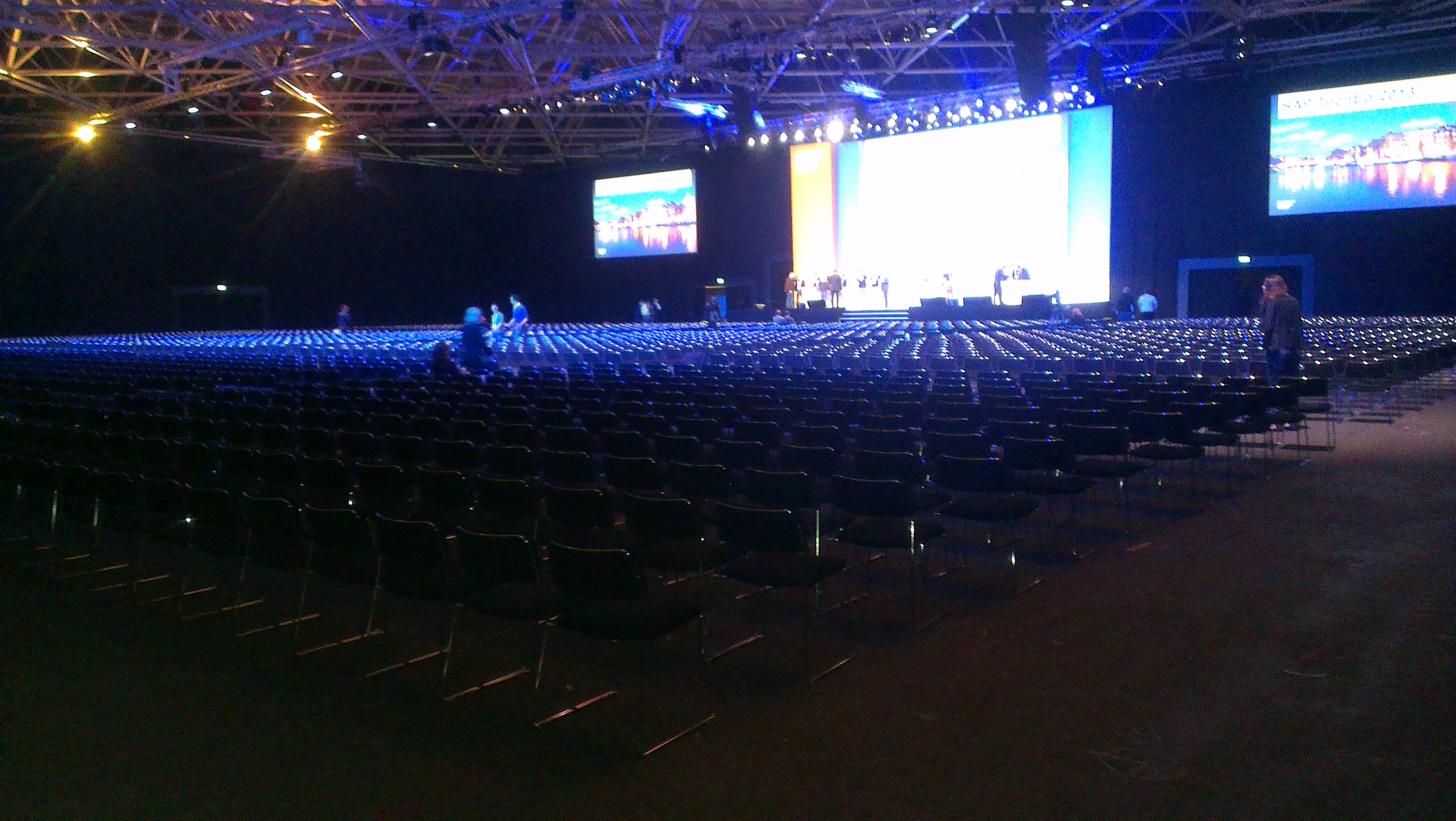 But this time the feeling was fleeting, I was part of a great team, one that relied on each other and which supported each other. In addition over the next few hours I was amazed by the level of good will and camaraderie that came from varied and unexpected corners. SAP Mentor Jan Penninkhof joined the team to help us sort out our horrendous UI and InnoJam judge Claudius Metze and Janos Varadi were fantastic.  They came to the rehearsals and most importantly for me laughed at a couple of tentative jokes that I had included in the presentation. They didn’t need to be there, and I’m sure that they had better things to do but it meant a lot to me that they were and I will always be indebted to them. In addition, a multitude of well wishes including mentors, organisers and conference attendees passed on their support and made me feel that somehow things might just work out OK!

Mark Finnern in the build-up did nothing to sooth my nerves. However the reception we received upon arriving on stage frankly took my breath away. Our team were brilliant, but more than that I saw faces that were genuinely supportive. In particular I was aware of Mentors Phil Loewen and Marilyn Pratt and a (great) Design Thinking coach Julia Dorbic all rooting for the underdogs from InnoJam.

I got through the presentation. We were far from perfect but we were OK, I’d not gone blank, hadn’t embarrassed myself, and the app we developed actually worked! Content with this I sat down and immediately and drank 3 bottles of beers in quick succession that were kindly hidden away for me by a forward thinking team mate (thanks Christian Braukmueller). When it came to going back onto stage for the results, I was happy, we had done ourselves proud and I had had the opportunity to speak in front of a huge number of people. But more that this, I felt like I was part of a team that consisted of not only my Cloudsitter counterpart’s but also everyone else who have passed on a kind or encouraging word.

And then we won DemoJam.

We went wild, and for the second time in two days I was euphoric. Once again the team had managed to triumph against the odds much to our eternal surprise and delight. We passed that evening and the next day in a slightly surreal fashion being congratulated by people who I had never met before, hosting a ‘Meet the Demo Jammers’ session (which I was unaware of until 5 minutes before it began – sorry Uwe Kylau) and finally being interviewed about my TechEd experience. It was truly an amazing experience and one I would recommend to anyone.

However now that the dust has settled and as I look back on my first TechEd experience it is clear that the memories that I will treasure the longest are not directly linked to either winning DemoJam or InnoJam. Being part of the Cloudsitter team, talking to Jeanne Carboni et al after the Fail Faire, watching the Mentor Band or playing Werewolf games onMark Finnern‘s  house boat (with Ali Samieivafa, Gregor Wolf, Uwe Fetzer and others previously mentioned) are the memories that make me smile the most.  Whilst winning ‘the Jams’ was great, undoubtedly the best thing about TechEd was meeting a huge amount of brilliant people who I now consider friends and making the first tentative steps into a community which I never knew existed. 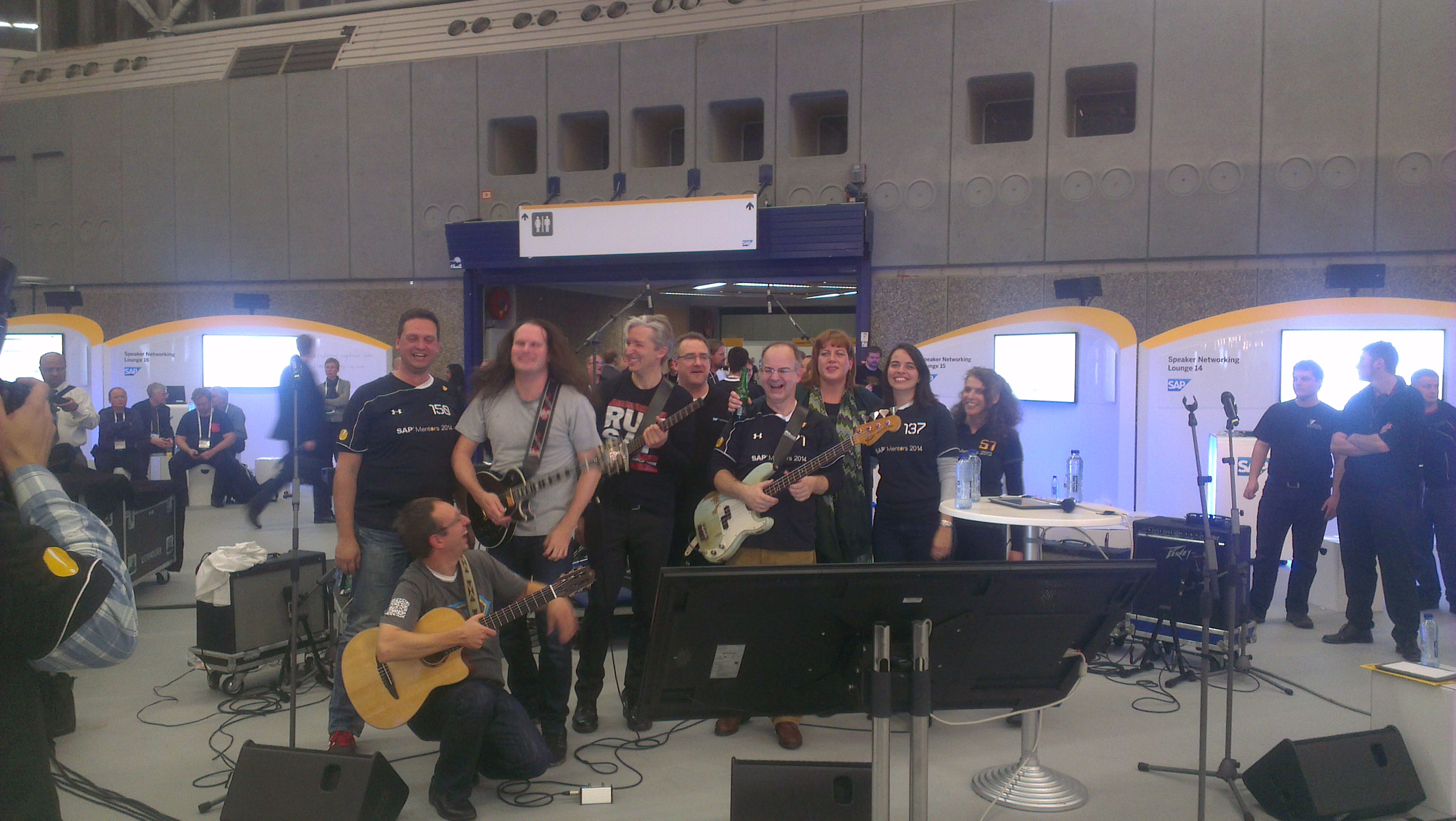 So what did I learn? Well no code that’s for sure! But I did come to realise that failure isn’t necessarily bad but not being prepared to invite the possibility of failure into your life certainly is. This experience has taught me to attempt more, to focus on the journey and not on where that journey might lead.

So this blog is my first step on that journey. I have never blogged on SCN before and to be honest I’m still concerned that I’ll put this in the wrong place or that people will think its dull, naïve or just plain pointless. But the difference is that after the last 5 days at TechEd I am at least willing to take the risk, to invite failure despite my reservations – and for me that is big step forward.

Many thanks to you all…

Also many thanks to my fantastic employer Red Solution/Red Commerce for enabling me to attend the event (and hopefully for allowing me to attend others in the future!!!!!!!!)